Pollyanna McIntosh’s directorial debut “Darlin'” is a unique genre-bending horror film that embraces both the light and dark sides of humanity.

Equal parts blood-soaked cannibalistic gorefest and charming, coming-of-age tale, Darlin’ delivers a powerful message to audiences about blossoming sexuality and the terrifying burden all too commonly experienced by young women as they explore their bodies in an unfriendly world.

This film, which is actually the third installment in a trilogy based on characters by late writer Jack Ketchum and cult film favorite Lucky McKee, delivers a powerful punch with underlying themes of womanhood, motherhood, teenage sexuality, and how families can take all shapes and forms.

Portraying the titular character, Darlin’, is up-and-coming ingenue Lauryn Canny, who electrifies in a role that is mostly non-verbal.

Director and writer Pollyanna McIntosh portrays her character, The Woman, for the third time in this installment. She delivers as a grotesquely lovable cannibal who has very much embraced her role as a mother to Darlin’ ten years after the events of Lucky McKee’s film, The Woman.

After Darlin’ is delivered to a hospital for an unknown reason by The Woman, we, as the audience, are encouraged to explore why The Woman would essentially abandon her child. She is re-introduced to humankind in a startling way — hit by an ambulance, strapped to a gurney, and then drugged by an unkind doctor moments after she begins to place her trust in a kindly nurse (Cooper Andrews, The Walking Dead).

For those who have seen McKee’s The Woman, Darlin’ has always been kind to The Woman. And while she likely did experience some suffering either directly or indirectly at the hands of her cruel father, Chris Cleek (Sean Bridgers), enough time has lapsed that she likely remembers little about the life she led before. Because of this, it’s a sharp re-introduction to “civilized” society.

That re-introduction leads the Catholic Church-sanctioned hospital to contact the Bishop (Bryan Batt, Scream: the Series) about how this feral child could lead to attention from the press if they were to, somehow, “rehabilitate” her through the word of God. The Bishop also hopes such attention will bring additional funding to his pet project, a care home for young, orphaned girls.

Darlin’ is whisked away to the group home after she bonds with Andrews’ character and becomes immersed in a tale that plays out very similarly to films like Girl, Interrupted.

What follows is her attempt to not only come into her own, but navigate the pitfalls of a society that wants to change and control her.

She finds camaraderie and understanding in some of the other girls who are living at the group facility. And she is looked after by Sister Jennifer (Nora-Jane Noone (The Descent), who was previously living at the facility while she underwent drug rehabilitation. She seemingly has her own dark history with the place.

Even so, Darlin’ isn’t completely disconnected from her true family. On her heels is The Woman (McIntosh), who seems hell-bent on their reunion. And she will stop at nothing to protect her Darlin’ from the cruelties of men that she knows all too well.

As a viewer, I felt that having a bit of background knowledge of The Woman’s character by seeing the first two films in the series provides a deeper understanding of Darlin’, specifically with McIntosh’s character.

But the film stands alone and earns its own bite and teeth through the director’s brilliant storytelling.

It’s not uncommon to see horror films with a strong, sociopolitical message that draws its strength from modern influence and societal struggles. In fact, much of the horror genre attributes its roots to these societal underpinnings.

Drawing from sources like the slow dissolution of separation of Church and State, the Catholic Church scandals, the MeToo movement, and the struggles of the LGBTQ community to adopt children from religious-based organizations, DARLIN’ will likely be appreciated by audiences who can see themselves in some of the characters — and see their stories told in a way that most films don’t do. 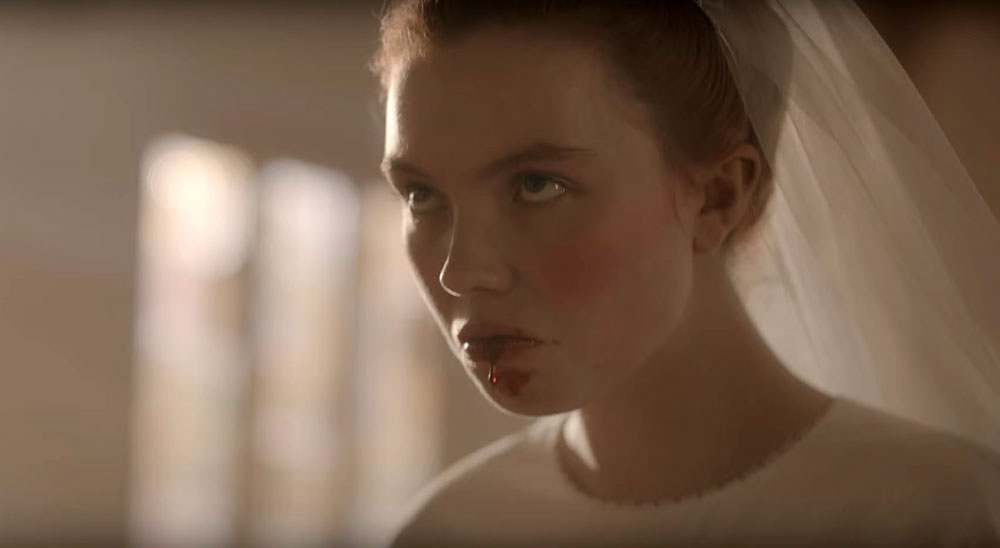 Plus, they eat people in this one!

While the film is threaded carefully with a lingering, feminist message and gives the audience a rare view through the eyes of a rather unique teenager, Darlin’ isn’t without levity.

The film uses humor in rare bursts throughout the film to showcase the absurdities of life, even when the world is crumbling around us.

In the darkest moments, even in the depths of grief or unspeakable torment, there can be breaths of fresh air. And while some may consider this to be a distraction or even over the top, I felt that it added to the overall narrative and made the characters – even the feral ones – to seem very realistically human.

There is beauty to be seen in the grotesque, and throughout Darlin’ it is all too easy to question whether the real monsters are the ones slashing throats and committing horrific acts of violence — or if they are the ones who seem to be trustworthy, with soft-spoken words and kindly faces.

The final act is a gore-laden sprint to the finish.

It makes you feel very much like you want to stand up and cheer for the ‘good guys’. Though they might not be the ones you would initially expect to cheer. And it is in this sequence that I felt the most at home, just like I did with its predecessor, The Woman.

Cinematically, the visual effects are on point, sharply contrasting the mood and tone of wild vs. civil, good vs. evil, and offering the audience a chance to embark on something of an adventurous journey with a cannibal woman as your tour guide. It can feel a bit like a dramatic piece at times instead of raw, unrelenting horror. But there’s a refinement to the terror that doesn’t rely entirely on blood and guts to make the audience feel uneasy and, at times, even violated and deeply uncomfortable.

Embrace your wild side and take a chance on Darlin’, which will be available on demand and in theaters on July 12th.

Darlin’ made its midwest premiere at Cinepocalypse 2019.