December is coming to a close, and I know you’re almost through your holiday watch list. But I humbly implore you to consider adding one final gem to your seasonal cinematic celebration. Brought to you by writer-director Dan Walker of Repo: The Genetic Opera fame and co-writer Jessica Luhrssen, 2018’s Slay Belles promises a fun and bloody holiday romp that doesn’t take itself too seriously.

Fans of a the classic cold-open will be thrilled to hear Slay Belles starts with quite a bang.

A trio of female friends holds a seated Ranger Sean (Stephen Ford) at gunpoint while a biker dressed as Santa Claus (Barry Bostwick) stands guard. The trio is Dahlia (Susan Slaughter), Alexi (Kristina Klebe), and Sadie (Hannah Wagner) — social media influencers who indeed leave the viewers (and Sean) asking some questions as to how they got themselves into this particular situation.

The film then cuts to earlier in the day. Sadie and Dahlia have just talked Alexi into coming along with them as they film their next video stunt for their followers. They plan to break into an abandoned Christmas-themed amusement park and find a souvenir to steal before making a break for it. But naturally, nothing goes according to the plan.

Things start to get eerie when they stop at a bar to prime up with a few drinks and happen to hear tales of some bear attacks that have been happening in the nearby woods. And once they make it to the abandoned amusement park, the trio has a distinct feeling that they’re being watched.

Things only escalate from there until the viewer finds himself sucked into an utterly bonkers adventure. 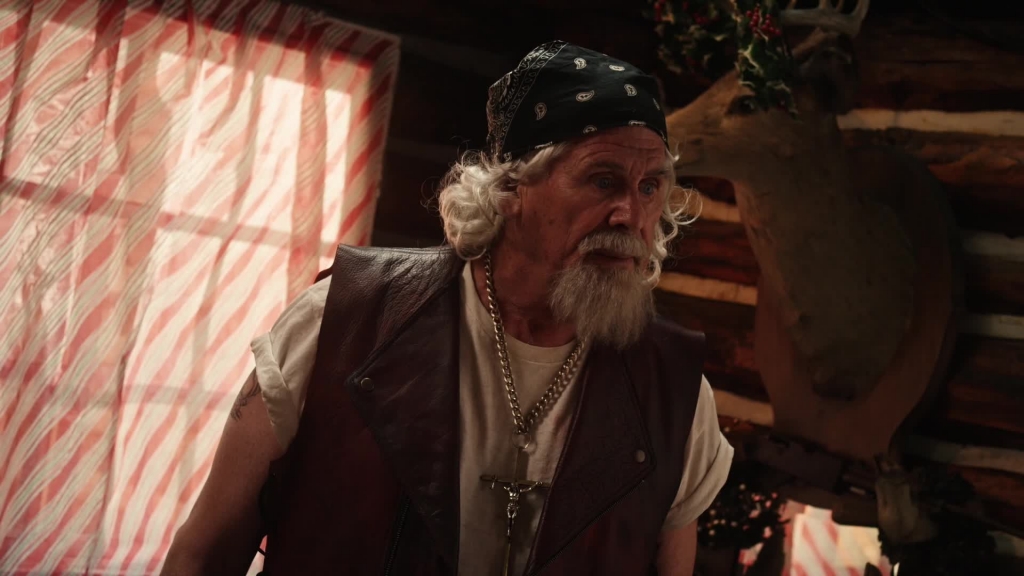 It’s an entertaining caper that finds our three influencers working alongside Santa Claus himself to stop his evil nemesis, Krampus, from canceling Christmas forever.

If you think that Slay Belles sounds like a gorier, more adult version of the Scooby-Doo adventures you loved as a kid, you wouldn’t be far off. That’s actually a pretty accurate description of how this film plays out. It’s way over the top for the most part, but it’s clearly intended to be, so the general vibe scans as fun instead of falling completely flat. It’s a lot like Santa’s Slay in this way.

Overall, the team of young, hot social media influencers turns out to be an excellent pairing for Santa and Mrs. Claus. Just the idea of these three being responsible for saving Christmas brings back memories of multiple madcap Christmas adventures from our nostalgic pasts, unlikely protagonists and all.

Add some blood, some sassy holiday attire, and a fair amount of ass-kicking, and Slay Belles is even cheesier and more fun.

To be fair, there are a few areas where this film felt loose and could have been a lot better. In particular, the script doesn’t quite feel like it lived up to its potential. It feels pretty scattered at times, and it’s not always clear where the storytelling is trying to take us as viewers. But thankfully, Walker’s directing style is tight enough and energetic enough to keep things moving right along.

By the time all is said and done, though, most viewers probably aren’t going to care that the story progression wasn’t airtight.

Slay Belles isn’t the kind of movie you watch because you’re in the mood for top shelf horror. It’s something you throw on when you want to have a bloody, gory good time with a holiday twist to it. This film isn’t going to scare the pants off of you or go down in history as one of the most legendary Christmas horror movies, but it will definitely keep you entertained well enough to be glad you came along for the ride.