Unearthing The Mummy in Literature

Representations of The Mummy in Literature for Young Readers

THE MUMMY. This shambling, groaning and moaning, cloth-wrapped revenant has appeared in numerous movies (most notably Universal’s 1932 The Mummy and Hammer’s 1959 The Mummy) as well as numerous books and book series (most notably Bram Stoker’s The Jewel of Seven Stars and Anne Rice’s The Mummy, or Ramses the Damned). The majority of mummy literature was published following the discovery of Egyptian pharaoh Tutankhamun’s (King Tut) tomb by Egyptologist Howard Carter and financial backer George Herbert. This gave birth to not only the first boom of interest in mummies, but also to tales of treasures and curses that have now become staples of the mummy mythos.

While movies and books like the ones listed above have garnered the most attention, there’s plenty of books in the children’s/juvenile/beginner’s realm of literature that fail to get the recognition they deserve. This is a shame considering the mummy’s dusty, musty presence in so many of their pages (and covers, as you are about to see). This post means to correct that.

Please bear in mind, though, that this post is by NO MEANS definitive… simply a small sampling of some of the lesser known books that are out there in this genre. I will, however, leave a link for further reading and research if you are interested at the end of this post. I thought it only fitting to cover this topic now considering Universal’s recent announcement that they are planning on rebooting (or should I say reanimating) many of their classic monsters, starting with—you guessed it—the mummy (with a projected release date of June 9, 2017).

Lastly, I have not personally gotten around to reading all these books yet, but I will give you the synopses on their backs so you may decide if this is a book worth digging up and reading. I will also put them in order from highest to lowest via Goodreads averaged rating. So sit back with a steaming cup of Tana Leaves and enjoy these unearthed treasures scanned from my very own strange tomb.

SIX BURIED TREASURES FROM MY TOMB 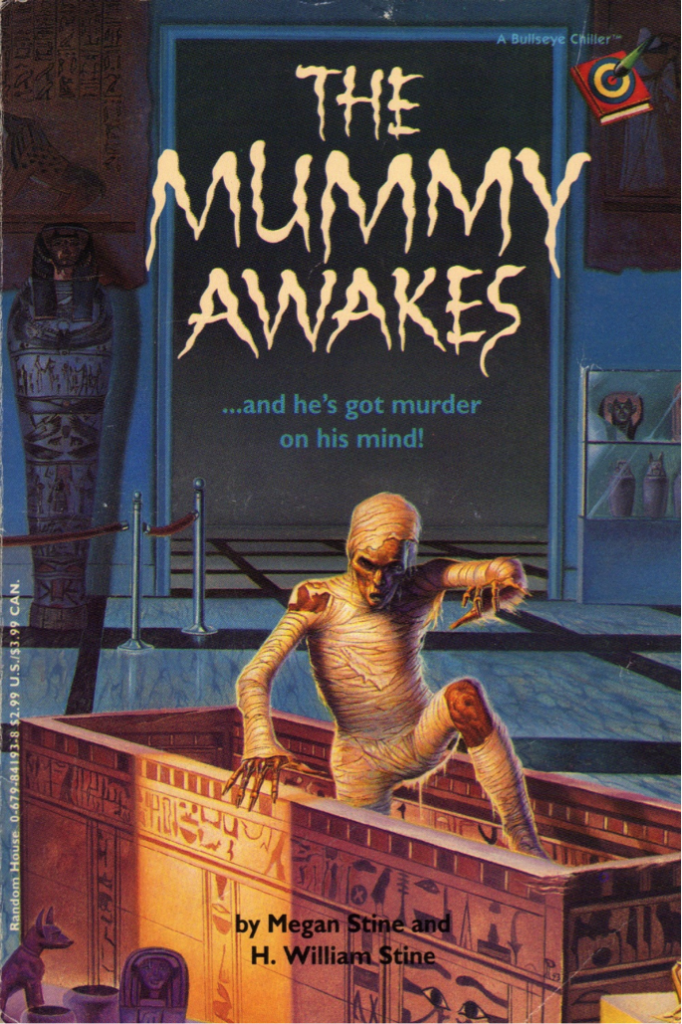 The mummy is twitching in his coffin…and giving Cameron Ross nightmares. Dreams of murder…of Cam’s own death! Why is the mummy terrorizing him? Cam doesn’t know. But there’s no escape when THE MUMMY AWAKES! 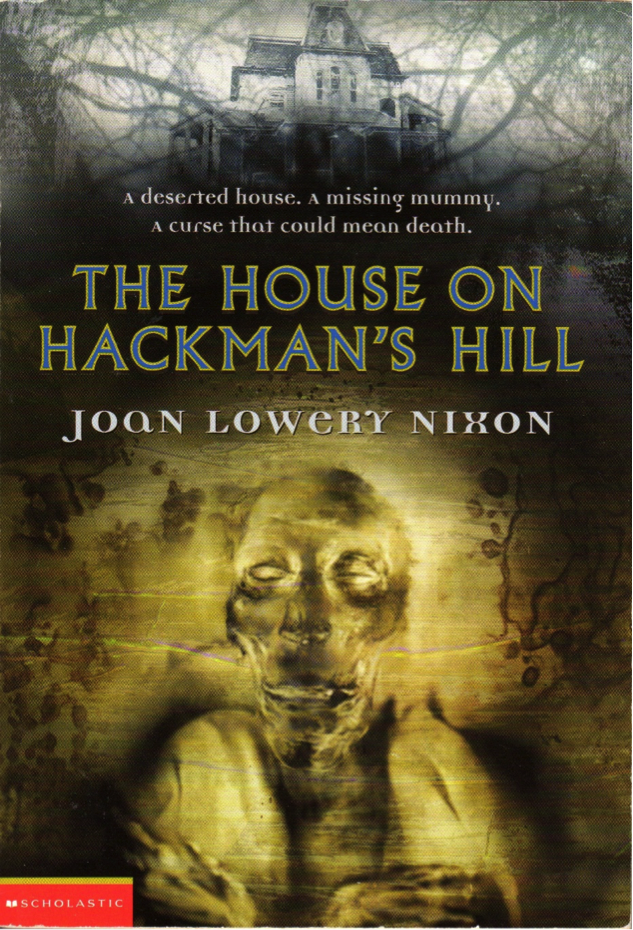 “Everyone told them to stay away. Now Jeff and Debbie know why.”

They can hear it breathing, see its shape in the darkness. It was as tall as a man, with the body of a man, but its head was that of a jackal. Anubis. Ancient Egyptian god and guardian of the dead. He was silent, still, waiting. Until they came. Now he moves through the ruined rooms of Hackman’s mansion looking for revenge. Looking for them.

3. THE NEW BOBBSEY TWINS:  THE MYSTERY OF THE MISSING MUMMY (Laura Lee Hope) 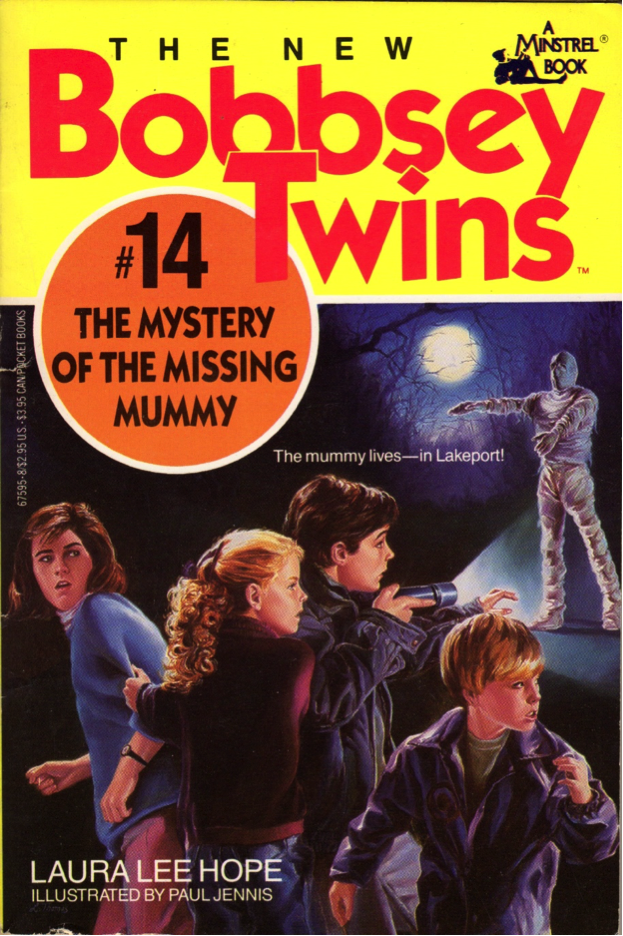 Halloween is only two days away, and already the Bobbsey twins are getting goosebumps. An ancient Egyptian mummy is on display in the Lakeport museum, and Freddie and Flossie are convinced it’s alive! The mystery deepens on the foggy walk home, when the twins spot a bandaged body strolling through the park. The theft of a fortune in jewels from the museum persuades the Bobbseys that there’s more mummy mischief to come, so they devise the perfect plan to catch the crook. If it works, they’ll be the only kids on the block to capture a living, breathing mummy in their own backyard! 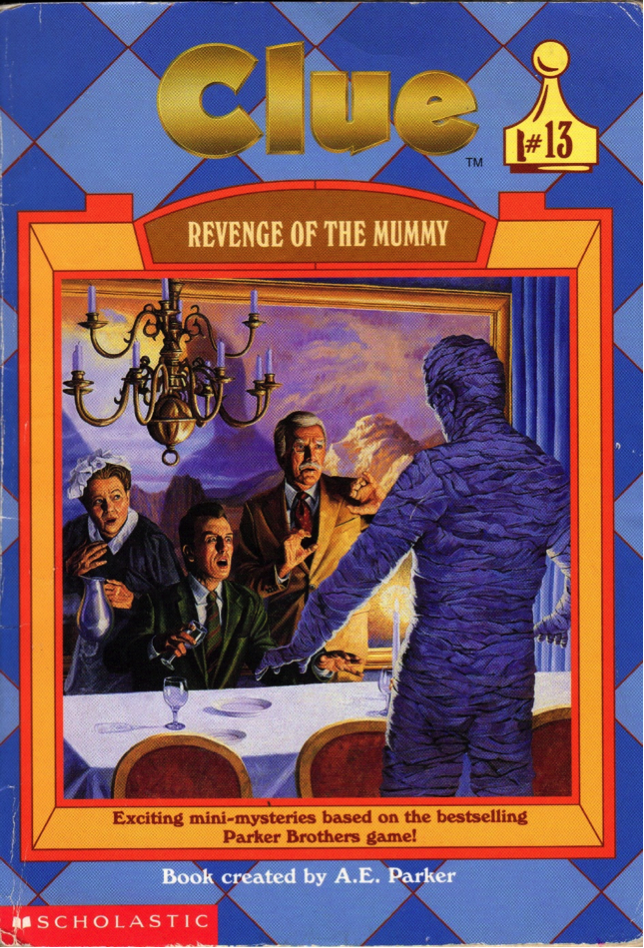 “WHO TOOK THE MUMMY’S TREASURE? Was it MR. GREEN in the DINING ROOM with the KNIFE? Was it MRS. WHITE in the LOUNGE with the LEAD PIPE? Was it COLONEL MUSTARD in the LIBRARY with the CANDLESTICK?”

Mr. Boddy has invited his six best friends to be guests at this mansion for the weekend. When this weird and wacky crew get together, anything can happen. Follow along with their antics as you match up characters and crimes. Exciting mind-bending mini-mysteries to test your ability as a sleuth!

5. ALFRED HITCHOCK AND THE THREE INVESTIGATORS IN THE MYSTERY OF THE WHISPERING MUMMY (Robert Arthur) 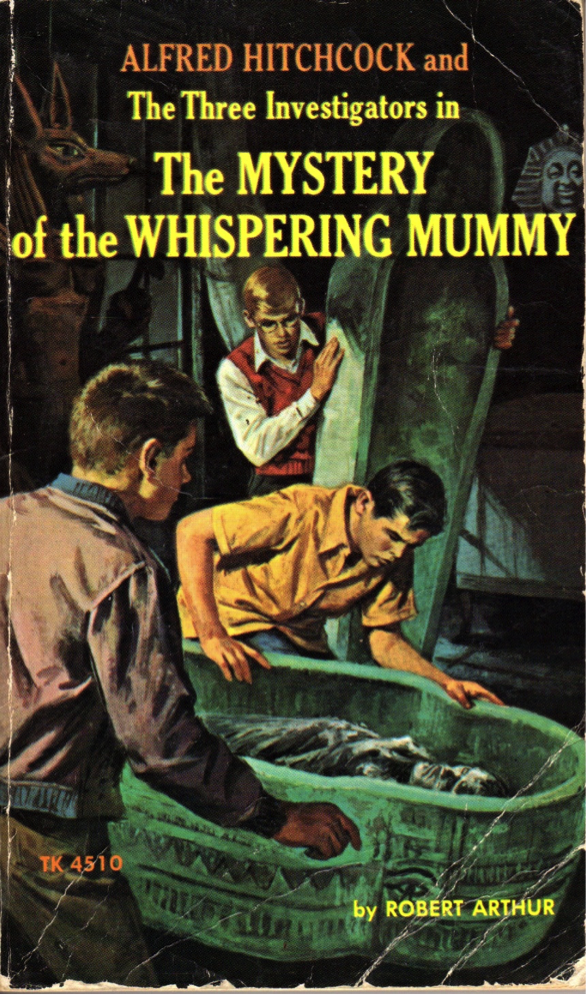 “Listen! The mummy is whispering again!”

Cautiously, the Three Investigators creep toward the mummy-case – and hear an eerie voice. What terrible message is it trying to tell? Is the evil curse of Ra-Orkon about to strike again? Jupiter, Bob, and Pete must find out – before it’s too late, before all three become its next victims!

6. CHOOSE YOUR OWN NIGHTMARE: THE MUMMY WHO WOULDN’T DIE (E.A.M. Jakab) 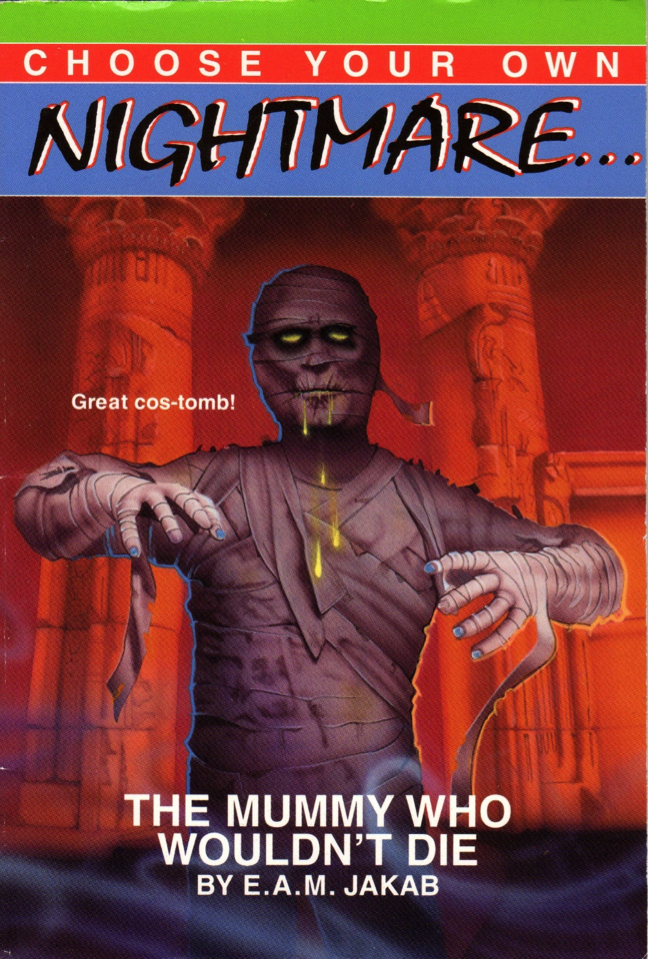 After hanging out in the Egyptian wing of the museum all afternoon, you, Josh, and Kate are ready to go. You saw the new mummy and checked out some exhibits. It was cool. Especially the mummy’s amulet. The Egyptians believed it had magical powers. Like protecting the mummy from evil. But after you leave, Josh finds the amulet in his pocket. He swears he doesn’t know how it got there. The three of you have to return it. The museum is closing soon. And the mummy is waiting…

I hope you enjoyed this sampling of mummy covers. If you want to learn more about the mummy — not just in children’s/juvenile/beginner’s literature, but in general literature — then I recommend: The Essential Guide to Mummy Literature by Brian J. Frost. Or… just go digging around the internet, your local book store, or library. Who knows what treasures and curses have yet to be discovered.

That’s a wrap! Until next time readers…

Stay tuned. Stay scared. But most of all… stay strange.