Review and Interview: The Theta Girl

The Theta Girl is a trippy and highly original genre mashup, created by self taught people who love film and are fiercely dedicated to their art. 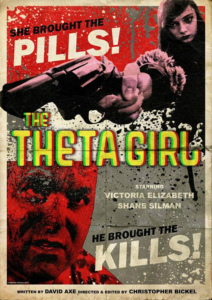 Do you enjoy gratuitous nudity, blood and drug fueled trashy cinema? Then look no further, because The Theta Girl has got your fix. Long time movie lovers, and first time filmmakers (writer) David Axe and (director/editor) Chris Bickel create an enjoyable Indie ode to horror, exploitation, and cinematic guilty pleasures.

About a year ago, the creators launched an Indiegogo campaign, hoping to help compensate its mostly volunteer local South Carolina cast and crew and enhance the film’s the production value. Ten grand was coughed up by Axe and Bickel personally, with the Crowdfunding only seeking $7,000. The creators were successful in their attempts to secure additional funding, clearing the goal and acquiring $9,000 total.

The micro budgeted production, being completed for about $14,000, has obvious passion poured into it from many sources, and this is made clear during the presentation of the “original psychedelic existentploitation horror film.”

THE THETA GIRL has the bloody guts and glory of Indie cinema splattered throughout, with notable practical and visual effects conceived by Jamie Clark and Brandon McIver. Alongside this particular team’s work are the effective performances of the actors (Shane Silman, Darrelle D. Dove, Cleveland Langdale ), who give giving spot on nostalgic portrayals of characters not far removed from those depicted in the annals of 70s and 80s B rated goodness.

The Theta Girl is a no frills, no holds barred homage to the slashers and members of sinful cinema from days past. Although it takes a moment to get the pace going, once it does we’re treated to beaucoup levels of over the top entertainment.

The Indie production opens with Gayce (Victoria E. Donofrio) venturing through a maze of streets and alleyways — degenerates and religious zealots at every turn. With a slick soundscape from a slew of contributing artists helping pave the way, we are introduced to the tough, resourceful, untrusting Gayce and her merry band of punk women called the Truth Foundation. 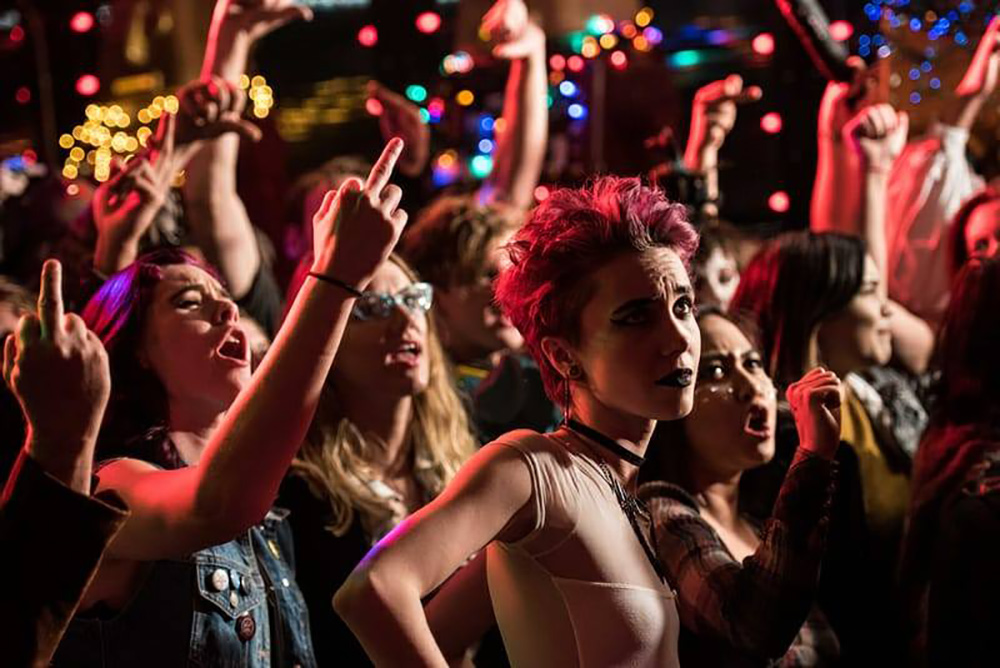 Our young focus of the film is a purveyor of a powerful psychedelic called Theta, who is relatively certain about her existence and role in the world. But her life is dramatically derailed when a series of murders target those closest to her. Hellbent on vengeance and vindication, our ‘heroine’ goes on a psychedelic blood splattered spiritual journey.

Because it’s all about the Theta, every twist and turn within the film is a direct cause of the substance. “It’s not a drug, it’s a doorway,” Gayce reveals. The film depicts shared, significant Theta induced journeys, bringing waves of the warm and fuzzies, naked bodies and encounters with a ‘divine’ being, interpreted both as comical and plausible. 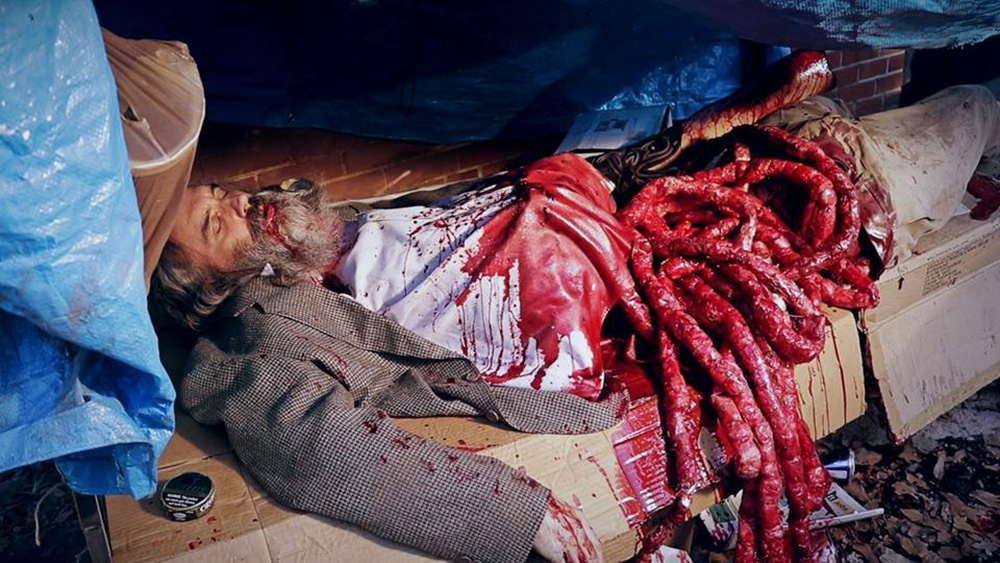 With the sudden slaughter of her friends and subsequent revelations made, Gayce experiences an existential crisis amidst her murder mystery/revenge quest.

To help ignite the collective creativeness and possibly the confidence within the rookie cast and crew of The Theta Girl, a trailer entitled ‘Teenage Caligula’ (which you can watch below) was completed for $150 in a couple weeks time before the feature. The warm up proved beneficial, because The Theta Girl is a wondrous example of how ingenuity, drive, teamwork, innate talent, and a shared passion can lead you to a place you want to be.

I reached out to Bickel, the film’s Director and Editor, asking him a few questions about the making of the film. Here’s what he had to say.

How long was shooting? Post-production?

I work 2 jobs at about 50 hours a week, so shooting took place on weekends and some weekday evenings between November 2016 and March 2017. Post-production went from March to October. I could have edited faster, but it was my first time ever really editing and I had to learn not only the software, but, essentially, the language of editing.

Where did filming take place?

Most of it was shot in Columbia, SC, but the Church scenes were shot in Inman, SC. 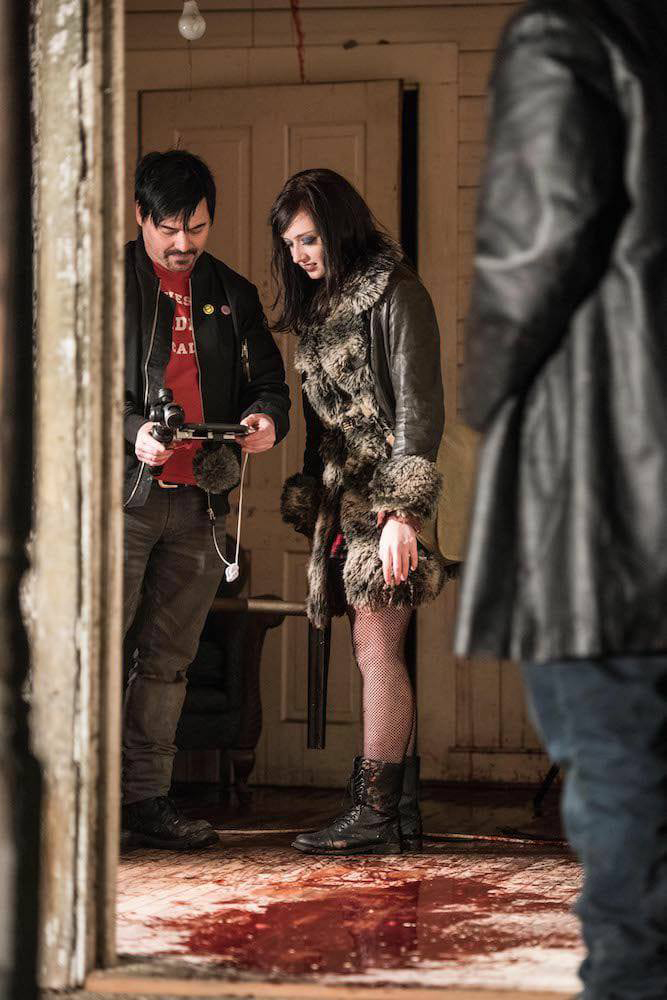 What are some of your favorite films and did they, or others, influence The Theta Girl at all?

My favorite films of all time are Taxi Driver, Harold and Maude, and The Shining…none of which probably influenced The Theta Girl much. As far as exploitation films that might have has a more direct influence, I’m really into everything by Jack Hill, George Romero, and John Carpenter.

My favorite exploitation movies, that may have had more of an influence, are Pieces, Coffy, Ilsa She Wolf of the SS, Thriller a Cruel Picture, Evil Dead, and Female Convict Scorpion Jailhouse 41…..among countless others, I guess.

I know this was your first feature film. Have you ever been on set in any capacity before, and what was the biggest lesson you learned while making this film?

I had been an extra on a movie set all of one time. I knew very little about being on or RUNNING a movie set before this, and everything I knew I learned from watching YouTube tutorials. The biggest lesson learned was that technology will fail, but it is still easier to control than people.

I can’t thank Chris enough for his time. The Theta Girl is gritty, gory, and a pretty damn good time. Be sure to support this eclectic and fun passion project!