TIFF 2020 Review: Shadow in the Cloud 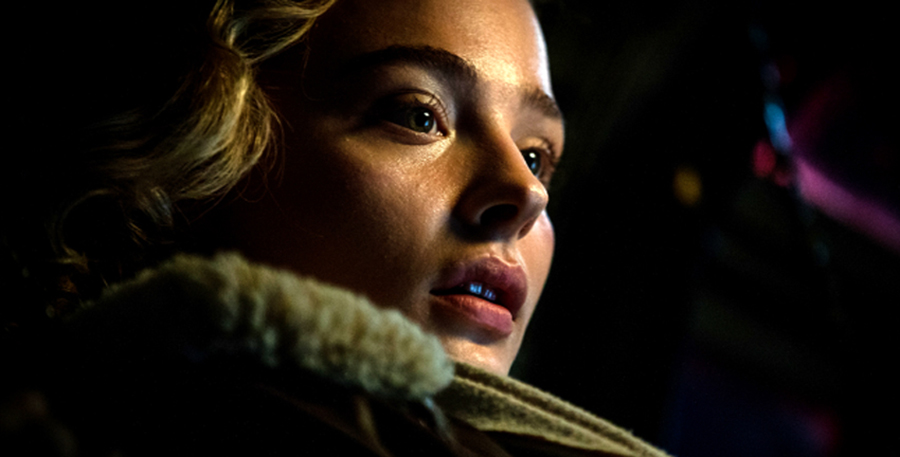 Where to begin with this one? I guess I should start by saying your level of enjoyment of Shadow in the Cloud — the relentlessly entertaining, mercilessly paced, pulpy WWII action/horror flick —  is in direct proportion to your acceptance/tolerance of the film’s unwavering commitment to both a strong feminist point of view and its absolute bonkers, batshit insanity.

The year is 1943 in Auckland, New Zealand. Chloë Grace Moretz is Maude Garrett, a female flight officer in the WAFF (Woman’s Auxiliary Air Force) with last minute orders to board a B-17 plane leaving from Auckland Allied Air Base. She is armed with a passable British accent and a carry-on bag containing something so top secret, the mere mention of looking inside will get any one of the seven men aboard the aptly named “The Fool’s Errand” court marshaled.

Maude boards the plane, and we meet the disposable-save-for-their-different-accents, all male crew. She is quickly met with casual sexism and “boys being boys” banter, before she is sent to the rickety ball turret in the plane’s belly. It’s there the casual sexism becomes full-on misogyny and toxic masculinity as she inadvertently hears the boys locker room chatter over the radio.

Not to worry, Maude is no stranger to the ways of sexist flyboys. She acclimates quickly, letting them know that whatever bullshit they’re slinging makes no difference to her or her mission, which is to get the mysterious package to where it needs to go, safe and sound.

Over the next 15 minutes or so, we are with Maude in the ball turret as she engages with the disembodied voices in her headphones. These moments are there to serve the thread bare plot and, more importantly, show the audience every facet of Maude’s mysterious and ever evolving character.  The wooden, paint-by-numbers chauvinists on the other end of the line are simply pieces of dialogue volleyed high so Maude can smash that patriarchy.

Then, at about the 20 minute mark, an actual gremlin shows up on the wing of the plane, and it’s up to Maude alone to handle it. 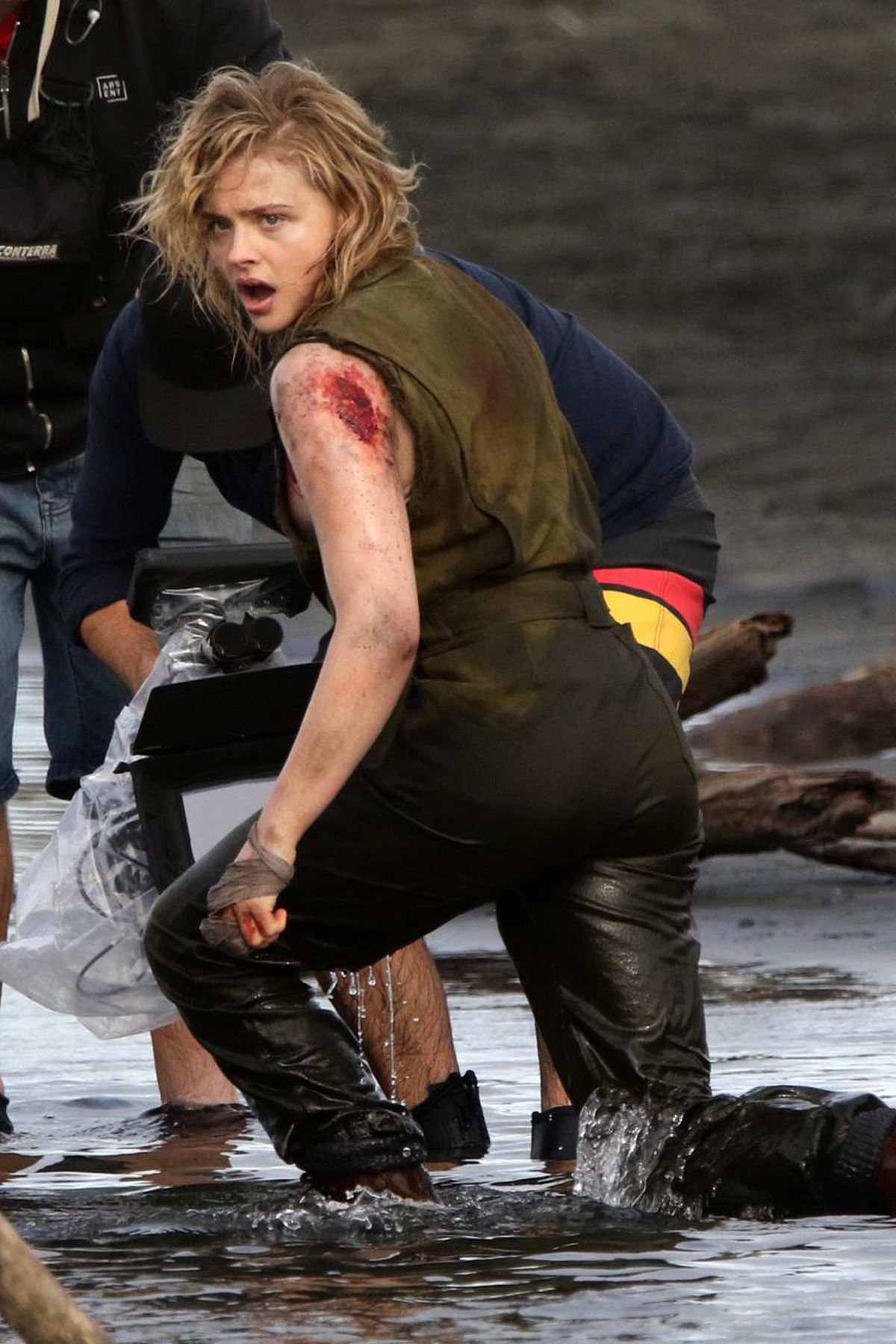 Chalking it up to ‘female hysteria’, the crew of The Fool’s Errand don’t do anything about the gremlin. And if you’ve just connected the plane’s name with the men’s lack of action, you’re starting to see what kind of a movie this is.

So herein lies my dilemma. Do I keep going with the synopsis (and believe me when I say, the appearance of a gremlin on the wing isn’t even remotely the craziest thing that happens), or do I fall back on the old, “At the risk of spoilers, I’m going to stop right here” line?

I could tell you literally everything that happens, beat for beat, and I am fairly certain it wouldn’t impact your enjoyment (or distaste, depending on your tolerance level for WWII action/horror mash ups) in the slightest. That’s because Shadow in the Cloud isn’t the type of film that is concerned with set-up, plot points or even any semblance of sound logic whatsoever.

This is a  pulpy sledgehammer of a midnight movie that relies solely on the audience connecting with Maude just enough that we will be with her through anything. And with an anemic running time of 73 mins (83 with credits), we better decide quickly.

Well, the good news is, Chloë Grace Moretz, anchors the hell out of this movie, and we are on board almost immediately. 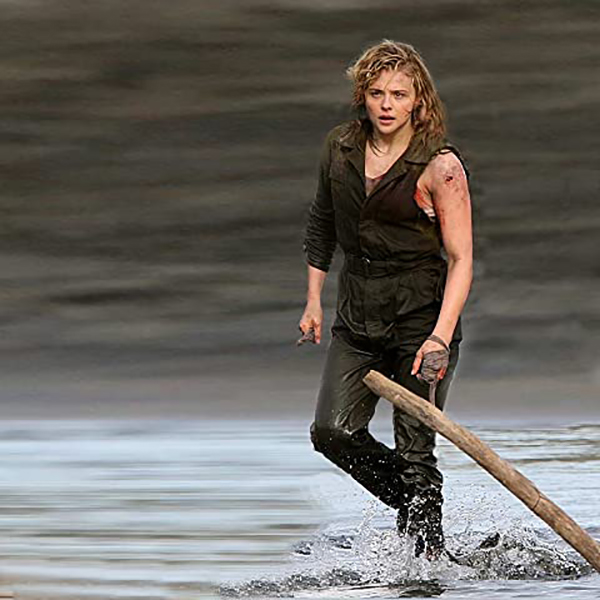 Director Roseanne Liang swiftly moves the film’s heroine from one insane situation to another… and another and another and… pant… pant… another — never once taking the foot off of the gas. Liang does not rely on quick cuts, cheap jump scares, or bombastic sound design to keep the energy up. No, that task lands squarely on the shoulders of Moretz, who is more than up for the challenge.

Chloë Grace Moretz is thrown into the deep end almost immediately. And when the contents of the secret package are finally revealed to the crew (and the audience), ratcheting up the stakes and the tension, Moretz faces this new peril with fierce a determination and grit — so much so, it would make Ellen Ripley proud.

I know exactly what I’m watching, and Moretz knows it, too.

I know that everything in this movie is wholly implausible. Oh, who am I kidding?  It’s downright impossible!

But Moretz’s commitment, coupled with the Laing’s cinematic eye, makes it all work so effortlessly. 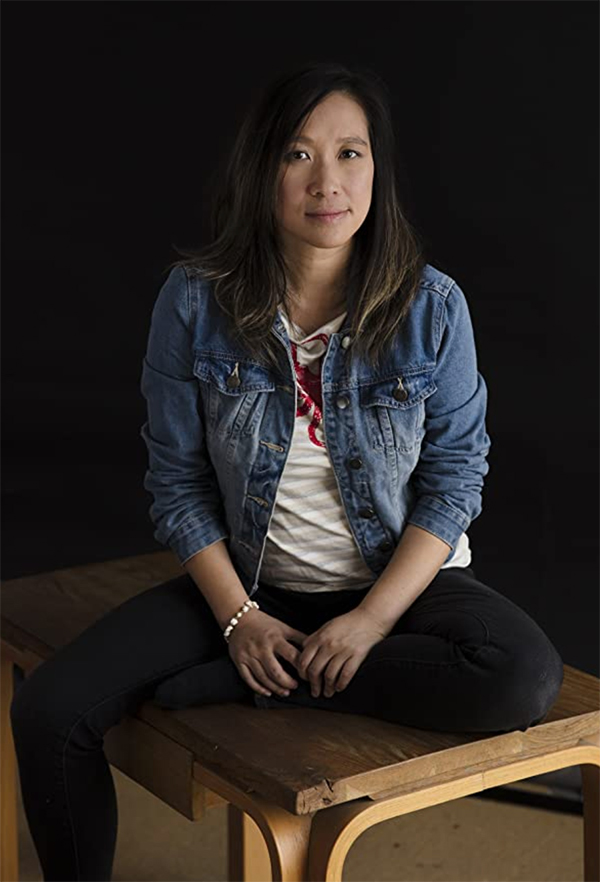 The details surrounding the action — from the painstakingly realistic production design to the authentic set pieces — just added to my enjoyment.

Sure my brain was whining, “Oh come on, this is ridiculous,” whenever Maude battled the gremlin on the wing… mid flight… or when The Fool’s Errand was under attack by a small fleet of Imperial Japanese A6M Zero fighter planes. But despite the protests of my brain, it couldn’t stop my mouth from often shouting, “FUCK YEAH!”

The whole idea of a mash up is to make something considered stale, fresh again. But we’ve seen so many mash ups, they themselves are getting a stale. I’m happy to report this strange blend of The Fighting Seabees meets Nightmare at 20,000 Feet is anything but!

For starters, Laing’s version of this script is unabashedly feminist. From the way she handles both sets of monsters on the plane, to the Ripley inspired hand-to-hand battle with the beast, to the not-safe-for-Instagram final shot, Shadow in the Cloud wears its feminist heart on its one remaining sleeve (because the other one was ripped right off before going toe-to-toe with a freaking gremlin).

It should be noted that Shadow in a Cloud was originally a Max Landis script.

Liang apparently rewrote the thing from the studs. While both Liang and Moretz emphatically claim that this movie is ‘completely distanced’ from Landis’ original version, I find it suspect that lines like, “You gotta mouth I just want to fuck…” were written by anyone other than Landis. That said, the only mention of Landis’ name is a quick, blink-and-you’ll-miss it co-written title card at the end of the film, auspiciously spaced, high above the director’s name — as if to say, “Here’s your credit asshole, now fuck off.” Which, I gotta say, is another wonderful feather in the film’s feminist cap.

If I had to knock this film down a peg or two, it would be due to the insertions of a prologue (a WWII propaganda cartoon with a yup, you guessed it… gremlin) and dénouement featuring actual footage of real life WAFF pilots. I just thought it was all a little heavy handed. And yes, I am fully aware of the irony in that last statement.

Shadow in the Cloud is a midnight movie you’ll either really like or really hate.

I can see some people just eviscerating this movie for its lack of logic, ham fisted dialogue and all around absurdity.  I’ll be honest when it ended, I was kind of conflicted as to whether or not I liked it. Sure, I enjoyed it for what it was, but was what it was good enough?

I created a venn diagram and weighed out the intention of the filmmaker on one side with the level of enjoyment on the other. Factoring in the film’s meager budget and scant running time, I was able to…

Just kidding! I told my brain to shut the hell up and ended up loving it!

As reported by Deadline, Vertical and Redbox Entertainment have just closed a deal to acquire North American distribution rights to Shadow in the Cloud, with plans to release multiplatform including theatrical next summer.