Can a low-budget exploitation film from the 1980s, about a parasitic alien worm that feeds on human brains, have a deeper philosophical meaning? 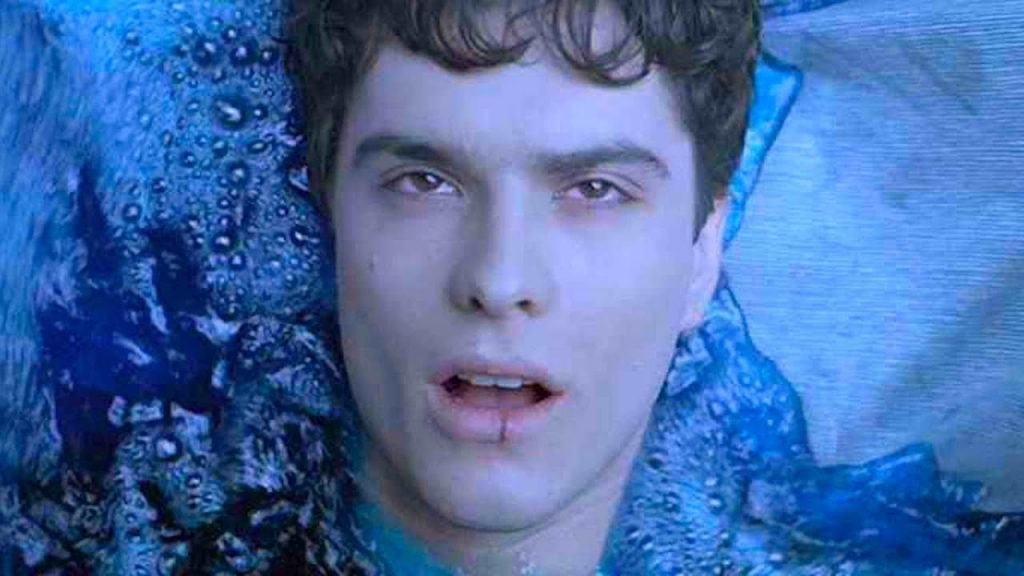 Horror is one of the most loved genres of film. One big reason for that is that viewers can cycle through an endless list of films and find something for every taste.

In modern horror, there is a big movement of slow burn horror that gets the viewer thinking about their emotions. Films from directors like Ari Aster and Robert Eggers, for example, are less about horrific beasts and more about trauma or grief. The films are deep, meaningful reflections on the darker areas of the human condition and are loved by many.

Some, myself included, are more inclined to look at the more absurdist side of horror. And there is no better director for this than the director of this week’s Tubi Tuesday, Brain Damage, Frank Henenlotter.

His first film, Basket Case (also streaming on Tubi), was about a young man in New York City who carried around his deformed, mutant, killer, siamese twin brother in a giant picnic basket. You would think that once a director makes a film this absurd, they would have gotten all of the crazy out of their system, but Henenlotter was just starting. 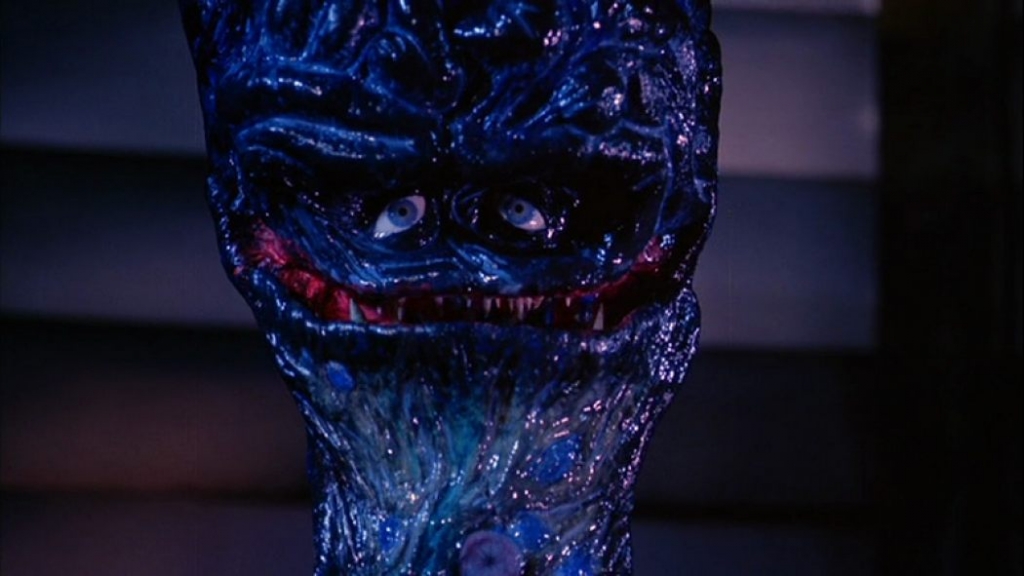 Five years later, he returned with an even more insane film, Brain Damage.

The two films have some similarities. They are both set in New York, the main character is a seemingly normal guy, and there is a freaky little monster. Beyond that, and the lack of picnic baskets, these films couldn’t be more different.

One night, Brian (Rick Hearst) comes in contact with a goofy, slimy, blue, snakelike monster called Aylmer who secretes a mysterious blue fluid from a tentacle that protrudes out of his mouth. Aylmer uses the tentacle to put blue fluid into Brian’s brain which causes extreme euphoria and psychedelic visions.

Seems like a pretty good deal for Brian until it is revealed that to continue to get the highly addictive blue stuff, Alymer needs to eat brains, human brains. 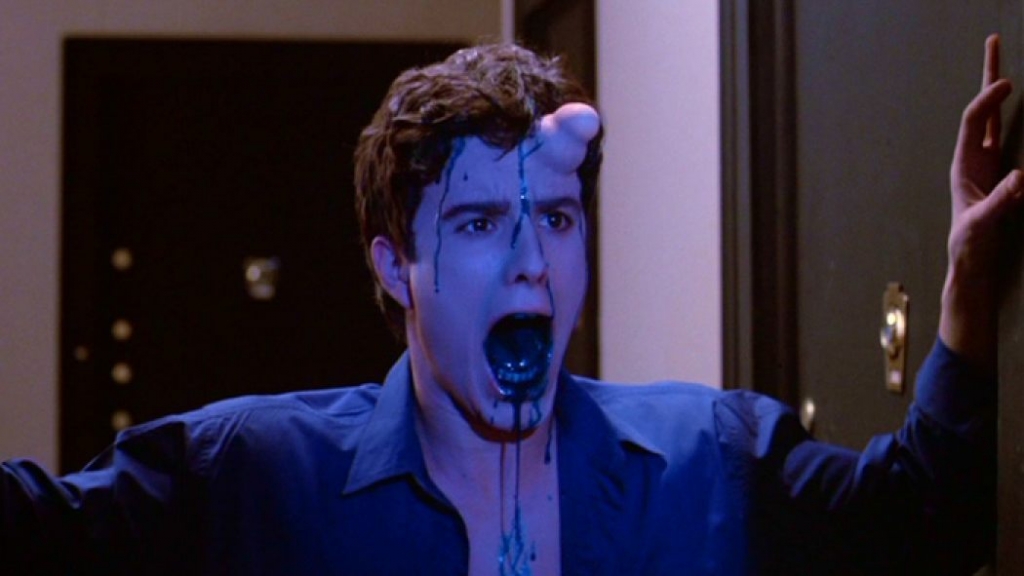 There is so much ridiculous stuff in this film that it’s hard to discuss it without spoiling some of the best parts.

Some of the kills in this film are among the most bizarre that have ever been filmed.

What’s more interesting is the underlying subtext of the film, which seems to be coping with addiction. Yeah, that’s right, a 1980s Frank Henenlotter film, about a brain eating blue worm with psychedelic secretions, has a subtext about the darker areas of the human condition.

Brian gets his high from the blue goo monster and goes off into the world. While under the influence, he knows not what evils he does and murders a nightwatchman in a junkyard and girl at a bar.

Once it is revealed to him by Alymer what is really going on, he can’t believe it. He thought he was just having a good old time. He didn’t know that he was negatively impacting the world with his actions while under the influence. He immediately denounces the drug and tells Alymer his time of murder and brain eating is over. 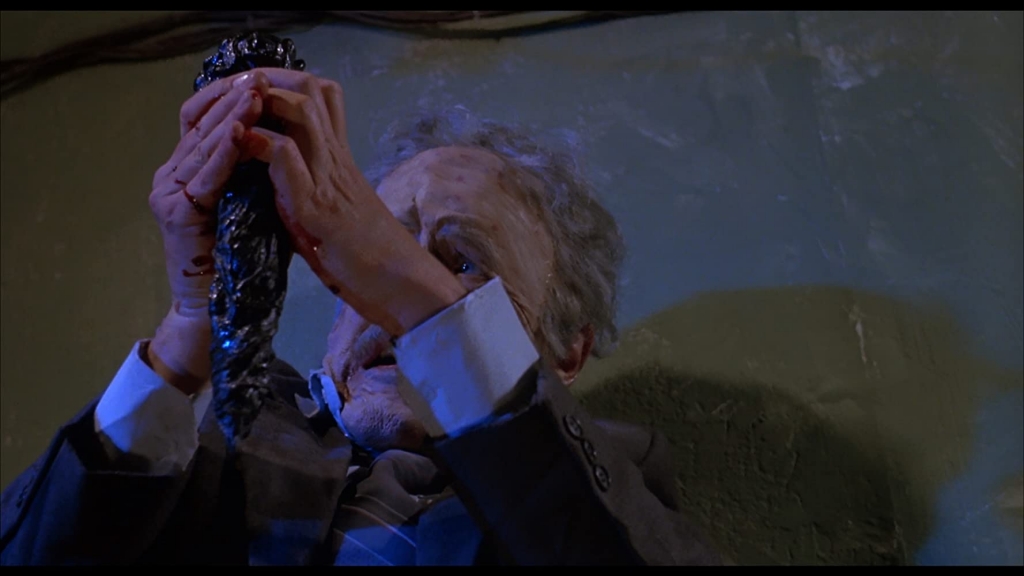 Brian tries to quit cold turkey, but the addiction is too strong and he soon finds himself writhing in pain in the throes of detox. The sweats, the pain, the hunger — all the symptoms a drug addict would have — are amplified by the blue monster in his sink mocking him, waiting patiently for Brian to relapse, which he finally does.

The drugs ruin his relationship with friends and loved ones, leading Brian to a life of crime as he is more concerned about his next fix than how he is hurting people. The whole thing ends with a pretty mind blowing overdose/suicide scene that puts the exclamation point on an absurdist film.

The message is delivered by a smooth talking, brain eating, hallucinogen secreting, snake monster. But it’s just as powerful as modern horror films with their very serious delivery. 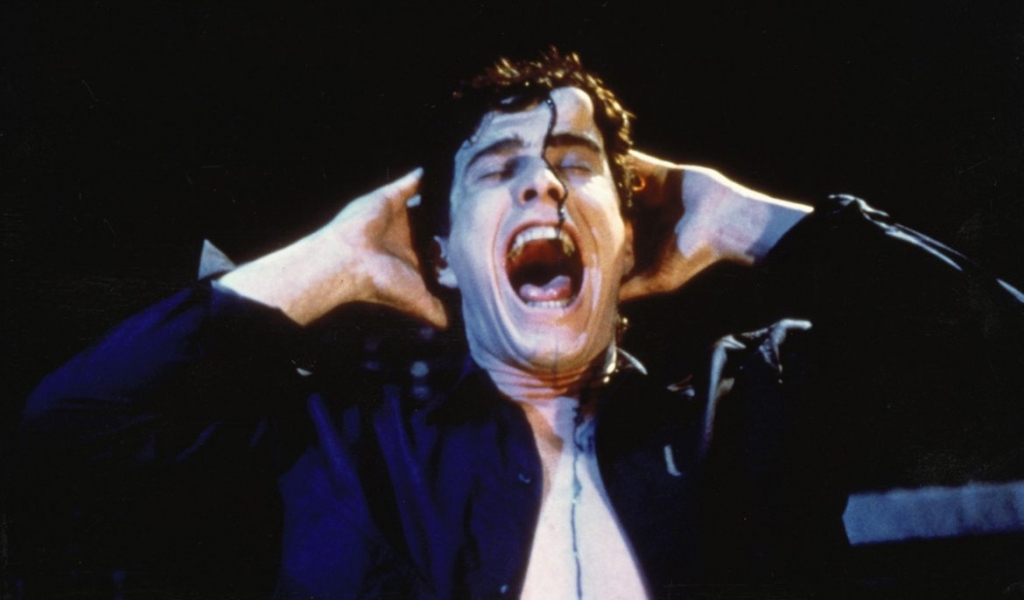 We often look at 80s horror films and call them cheap or cheesy. But the reality is some of them, and I would argue most of them, have a deep important meaning, buried within the absurdist visual art, that is of value and teaches a lesson.

If you’re looking for a deep, heady horror film that dives into the concept of addiction, then look no further than Brain Damage, now streaming for free on Tubi.