Posted by:
Tags:  Elivra Mistress of the Dark Tubi

Now decades old, “Elvira: Mistress of the Dark” still manages to shine as one of the best horror comedies, starring a true woman of horror icon. 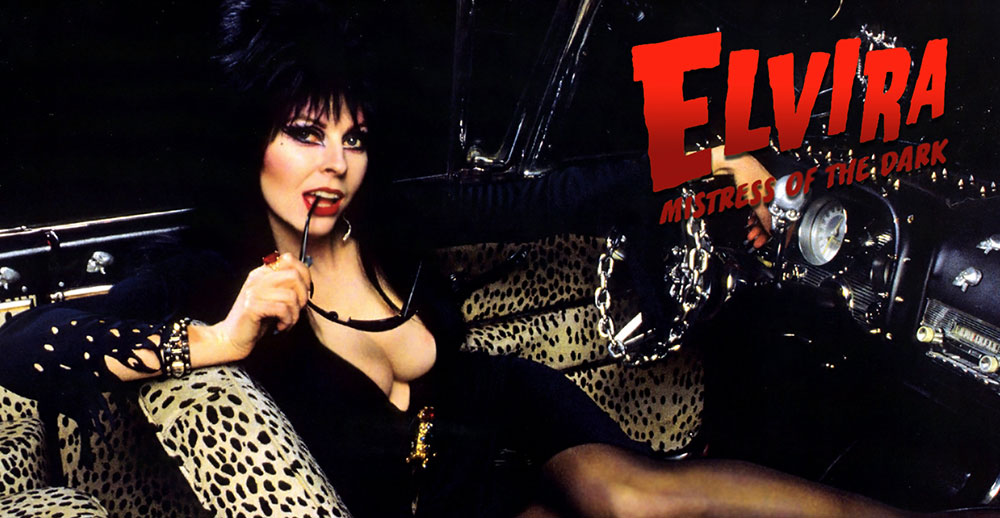 The horror genre is the most unique genre of films hands down. One of the things that horror has and other genres doesn’t is “The Host”.

In the heyday of broadcast television, every local region had their own host — from The Ghoul in Detroit, to Svengoolie in Chicago, to Dr. Shock in Philadelphia. Even after, the rise of cable the horror host remained thanks to HBO’s The Cryptkeeper and TCM’s Joe Bob Briggs.

But even as well known as some of these host are in the modern age, none were ever as big as Elvira. 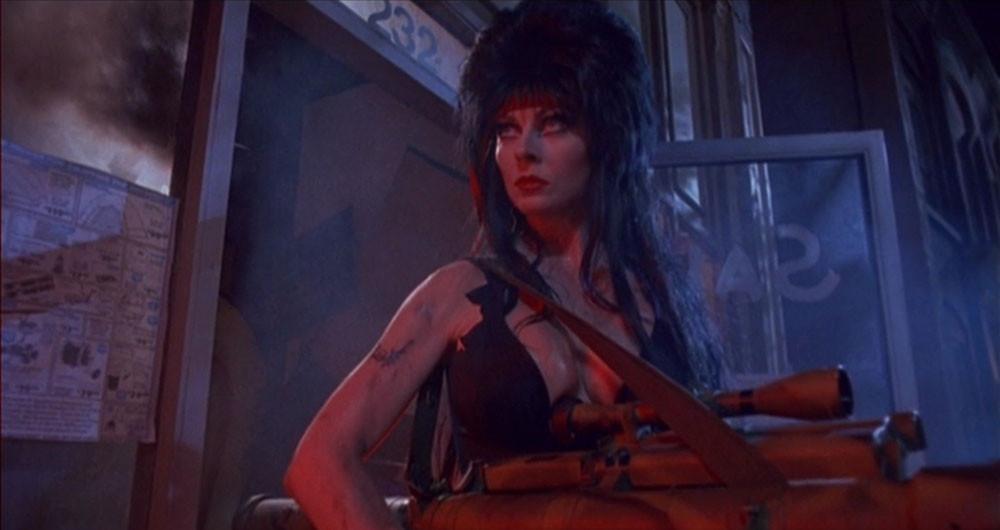 Her weekly show, The Movie Macabre, showed some of the worst pre-1980s horror movies ever. And it was a nation-wide sensation in the early 80s. Soon after, she was tapped for advertisements for numerous beer companies. She got so big that she even had her own movie. And that movie happens to be this week’s Tubi Tuesday recommendation: the 1988 horror comedy classic Elvira: Mistress of the Dark.

Another unique characteristic of the horror genre is the horror-comedy sub-genre. Sure, other film genres have parodies like Space Balls for Sci-Fi, Blazing Saddles for Westerns and Tropic Thunder for Action. But horror is the only genre of film where the mixing of satire and seriousness is blended so perfectly in so many films. The concept of horror comedy traces all the way to the Abbott and Costello Universal Horror movies of the 1940s. And it continues to today with films like Happy Death Day and Zombieland.

But one of the best horror comedies, with heavy focus on the comedy, remains Elvira: Mistress of the Dark. 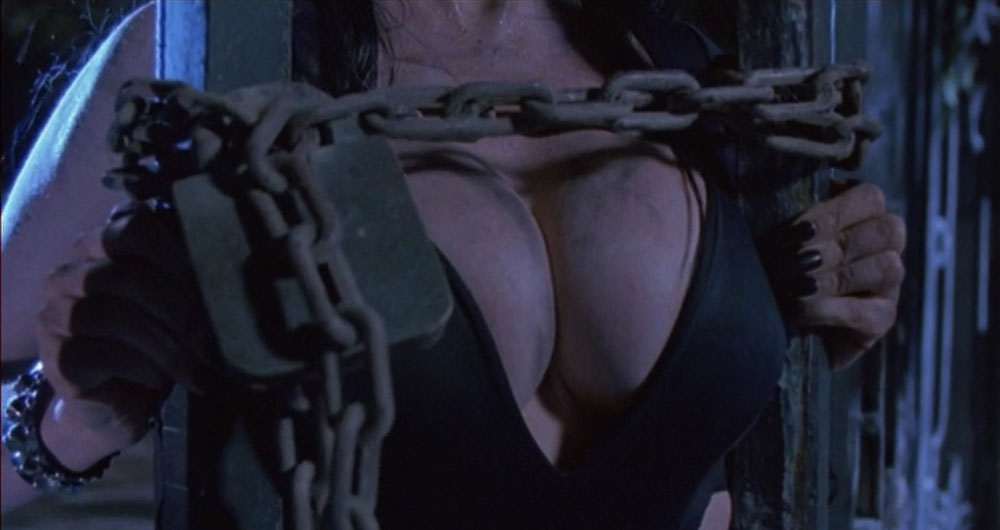 This movie is full of sexual innuendo and dirty double entendre one-liners. When a real estate agent tries to force himself on Elvira she remarks, “I was so close to selling this house, like 6 inches away.” And when the theater marquee letters fall on her head, love interest Bob asks, “How’s your head?” She replies, “Well no one has complained yet.” This movie had me screaming laughing at times at the absurd over the top dirty jokes and word play.

Granted, most of the movie is one-liner sex jokes and everyone focusing on Elvira’s boobs, but a story does exist. The basic premise is one that is familiar in 80s movies. A flamboyant outsider from the big city moves to a small puritan town, and the hilarity ensues. 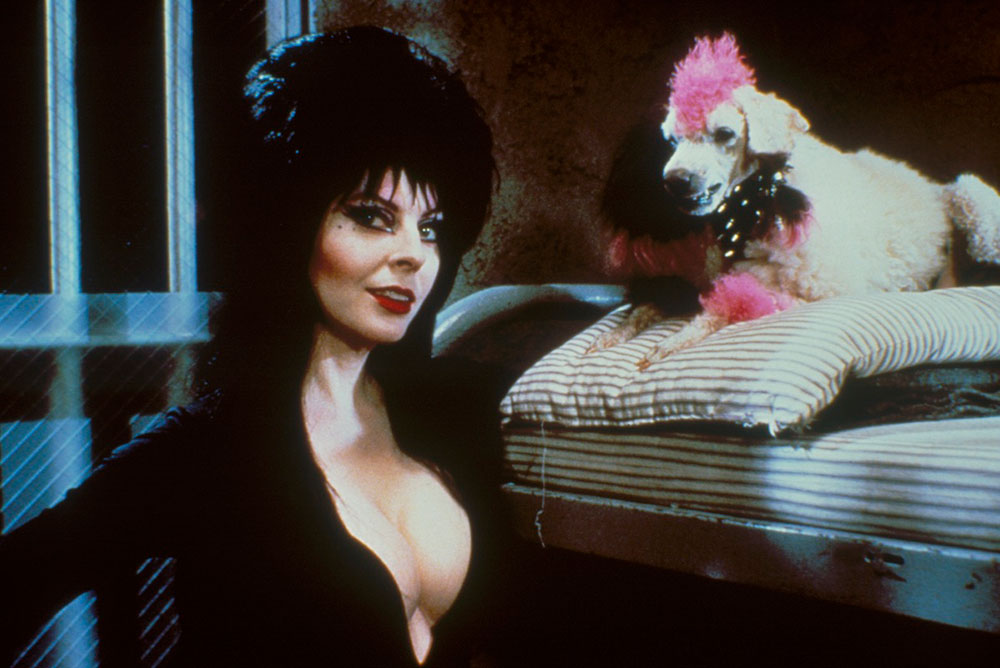 This movie is basically Doc Hollywood with Double-Ds. Elvira plays a movie host in LA who has a falling out with the TV producers. She wants to have her own Vegas show but has no cash. Luckily, her great aunt dies and leaves her an inheritance. So Elvira drives to small town Massachusetts to claim her fortune.

Turns out, her aunt isn’t rich. And that large inheritance is nothing more than a dog and a recipe book. The dog, however, turns out to be a witch’s familiar. And the recipe book turns out to be a spell book that her creepy uncle is trying to get ahold of to destroy Elvira and take over the world. You know, just like one of those old Roger Corman movies that Elvira used to host.

When we speak of women in horror, Elvira is certainly a pioneer. 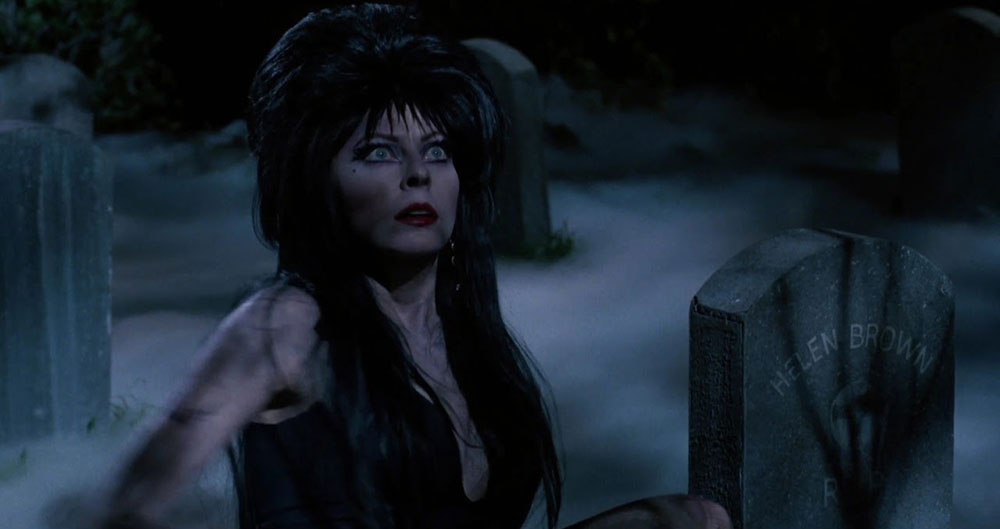 She’d no doubt land somewhere on the “Women of Horror Mt. Rushmore” if such a thing were to exist.

This movie is full of laughs throughout, and none of the comedy is dated or cringy — a major plus. The horror elements are strong strong, and the effects in this movie are top notch. Sure, the story line is a little goofy. But what would you expect from an 80s movies about a horror movie host?

If you’ve never watched it, it’s certainly worth a viewing. And you’re in luck because Elvira: Mistress of the Dark is just one of the great films currently streaming for free on Tubi.