For personal reasons, I can’t recommend a Chuck Norris movie. But if I was going to, it might be the kung-fu/horror hybrid “Silent Rage”. 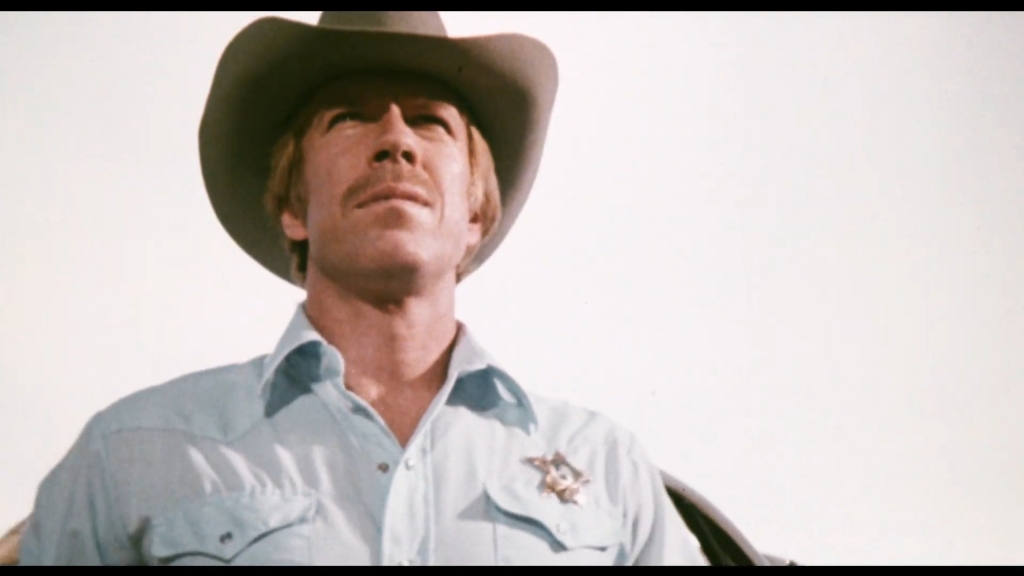 Happy New Year, and welcome back for another exciting year of Tubi Tuesday here at Morbidly Beautiful.

2022 has a bright outlook, and Tubi Tuesday is no different as we have a great schedule of recommendations for the whole year, starting with this week’s entry: the 1982 “action crime neo-noir science fiction slasher film” Silent Rage.

The film stars Chuck Norris as a Texas sheriff tasked with bringing an ax-wielding maniac to justice.  While this should be no problem for a kung-fu master like Norris, the ax-wielding maniac was the subject of a medical experiment that makes him quickly healing, super strong, and nearly indestructible.

The film is split up into four distinct sections, each with its own completely different look, feel, and tone.

The opening of the film is straight-up horror. 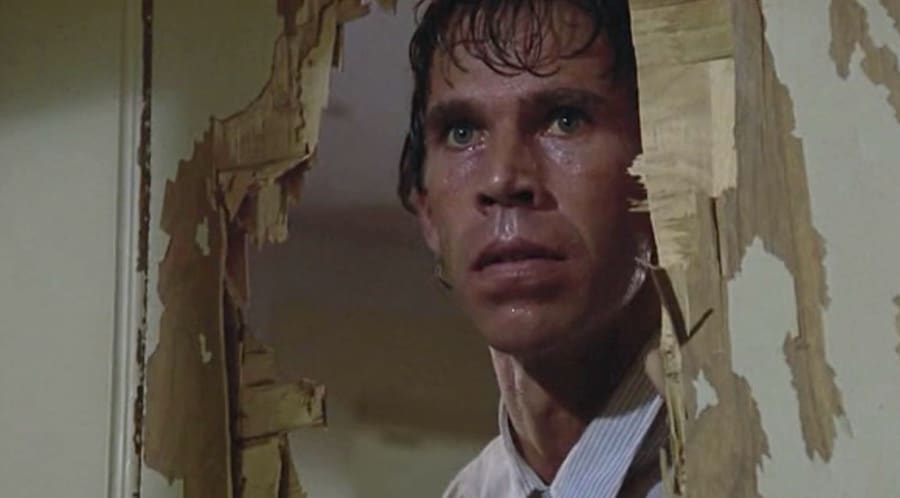 We are introduced to the maniac, John Kirby, renting a room from a mother of very loud children who wake him up from a midday slumber to answer a phone call.  He sweats profusely, fumbling for his pills as he tells the psychiatrist on the other end of the phone that he is losing his mind before wandering outside and grabbing an ax.

It’s very creepy as the film focuses on the woman of the house and her children and the camera catches John in the background marching closer and closer with the ax.

After he murders a bunch of people, the film shifts to the Chuck Norris kung-fu part of the film.

Norris arrives, heads into the house solo to capture the criminal and bring him to justice by means of fisticuffs.  This continues for the majority of the film as it focuses on Norris’ character fighting biker gangs in his small town and seducing women — with random scenes spliced in of a group of doctors injecting John Kirby with an experimental substance that makes him indestructible.

After Norris beats up the bikers and seduces a couple of women, the film then focuses back on Kirby who escapes from the hospital and goes on a killing rampage.

The third act is a traditional slasher. 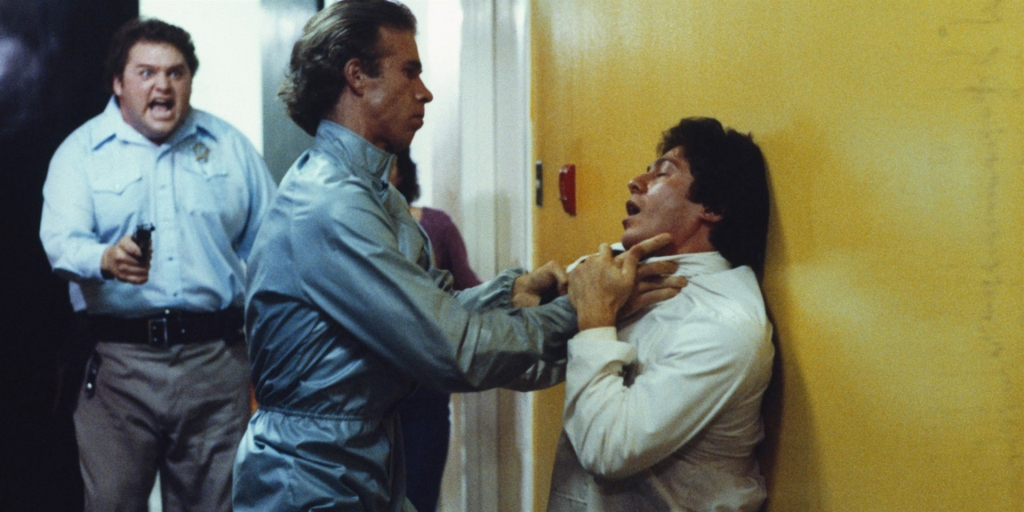 Kirby stalks victims in the cliche slow plodding way before putting the bodies on display for the final girl to find and scream about. But this is a Chuck Norris movie, and it could only end one way: with a kung fu fight in the woods.

After an uncomfortably long and dialogue-free fight scene, Norris stands tall after judo flipping the killer into a well before riding off into the sunset.

The horror sections of this film are absolutely incredible. There really is a feeling of tension, and they are beautifully shot.

The standard ’80s “lone badass sheriff” sections of the film, on the other hand, are not very good as they seem out of place with the narrative — and also because Norris goes looking for a fight against a group of bikers who haven’t really broken any laws.

Come for the horror segments, and stay for the kung-fu…because, when that’s done, there is still more horror.

Sidebar (on a personal note):

This film gets only one star from me because of a family legend regarding Chuck Norris. Chuck’s brother died during the Vietnam War and in his honor, he would tour around military installations doing martial art demonstrations. My father was a Force Recon Marine during the Vietnam War and was stationed at one of the bases where Chuck Norris visited.

My father and Chuck Norris were in the same place at the same time; this is all we can prove, and the rest is the stuff of legend.

As the legend goes, Chuck Norris was looking for sparring partners, so my humongous powerlifter, marine corps, golden glove boxer father volunteered. Chuck danced around having fun and my maniac father started punching Chuck very hard. So hard that Chuck stopped the martial arts demonstration and demanded my father be removed from the ring ASAP and kicked out.

From this moment on, Chuck Norris was the biggest wimp in the entire world. 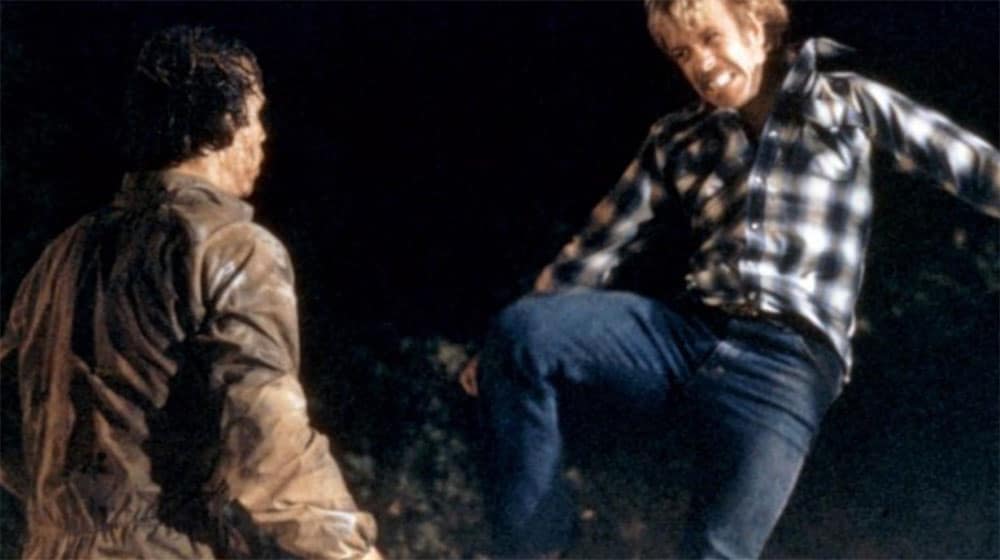 Growing up, we always watched tons of movies. It was not uncommon for us to leave Blockbuster Video on a Friday night with 10 or more VHS/DVDs. But never, ever did we rent or watch a Chuck Norris movie, except of course Way of the Dragon where Bruce Lee kicks his ass because, per my dad, he is the biggest wimp in the world.

This made things tough for my brother and I as naturally kids would say “My dad could beat up your dad.” But what do you do when your dad beat up Chuck Norris?  This got worse in high school in the early 2000s when Chuck Norris jokes came into mainstream popularity, which to us, were not funny because we only knew Chuck Norris as a short wimp who can’t take a punch.

Even now, at 70 years old, my father still holds a grudge and will tell the tale to anyone willing to listen.