“Skinned Deep” is a hidden gem from the vaults of obscurity that is too weird to explain — and too wonderful to miss out on. 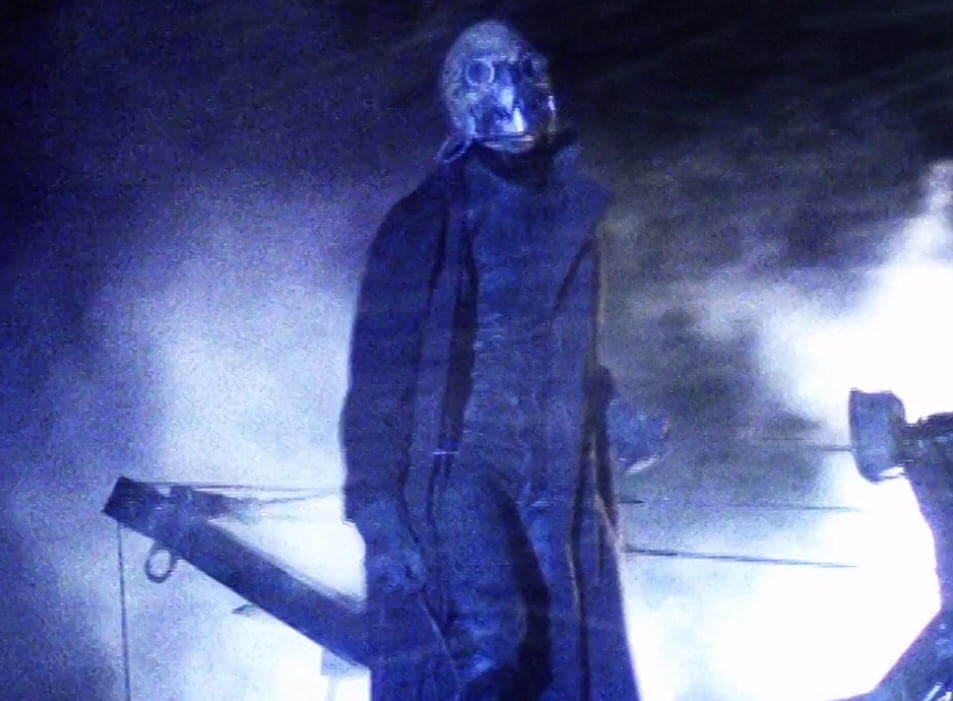 When I was in high school, one of the chief activities my friends and I got up to was going down to the local video store (remember those?) and trawling through the horror, sci fi, and fantasy sections searching for the strange, alluring, usually outright terrible looking movies we could find.

Often, all we had to go on was the title and the cover, and many of my favorite movie memories come from those nights spent watching the fruits of our searches well into the wee hours of the morning. It’s an experience that I often find myself missing, one to which scrolling through page after page of algorithmically guided streaming offerings can’t quite compare.

The closest I’ve come to replicating that feeling of discovery in the streaming era comes from looking through the horror section of Tubi.

Our love of Tubi is well documented on this site (there’s a whole column about it for crying out loud), and for good reason; it’s often the only place you can find many forgotten low-budget independent horror productions, those that never received a theatrical release and those that might have played on a couple of screens for a weekend or two.

I’m not ashamed to admit that one of my favorite time-wasters is scrolling through their vast horror section, clicking on thumbnails that catch my attention, watching trailers, and maybe adding them to my queue. It’s how I found out about films I’ve come to love, from the 1993 Australian horror-comedy Body Melt to the Z-grade schlockfest Fungicide.

Sometimes, my curiosity ends up leading to dead ends, movies that deserve their anonymity. But once in a while I end up rewarded with something enjoyable, and that makes it all worth it.

All of that to say, I stumbled upon Gabriel Bartalos’ 2004 directorial debut, Skinned Deep, promptly watched the trailer, and knew it was something I had to watch immediately. 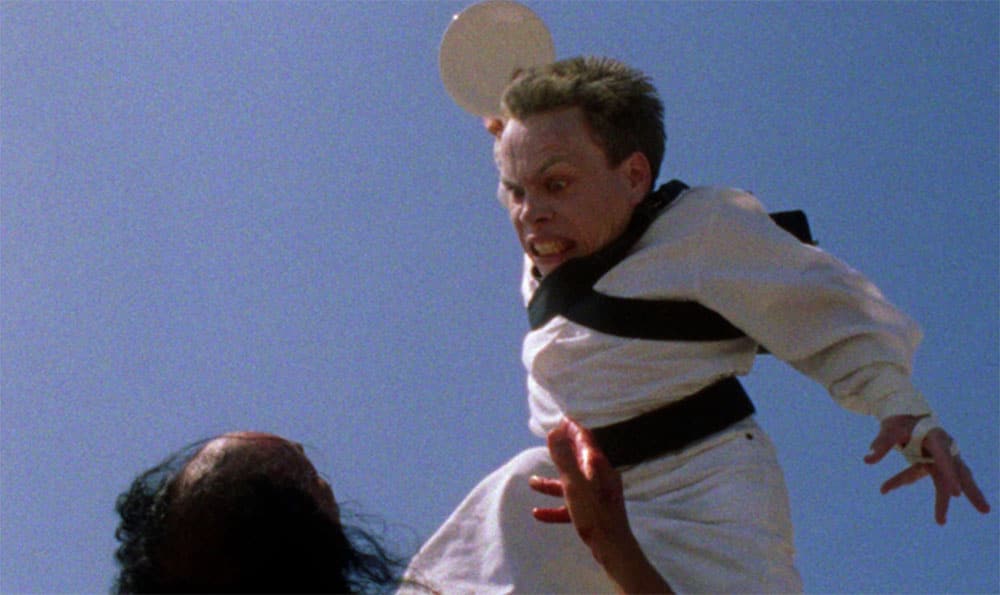 The movie actually has been covered on this site before; a mysterious guest author* wrote a very enthusiastic review a couple years back, which made me all the more excited to check it out.

Skinned Deep might be Bartalos’ debut as a director, but he’s no horror dilettante. As a special effects and makeup artist, he’s worked on everything from the Leprechaun movies to Darkman to last year’s Army of the Dead. The guy’s love for the genre runs deep, even if it has mostly existed behind the camera.

Skinned Deep is clearly a low budget affair, and has a fair share of the awkwardness that entails, but what it lacks in experience it more than makes up for in pure gonzo lunacy.

Bartalos also worked on Texas Chainsaw Massacre 2, and there’s more than a little bit of that film’s campy funhouse sensibility in Skinned Deep’s DNA, introducing us to another family of cannibalistic redneck weirdos.

The Rockwells are on a typical family road trip when their RV’s tire is blown out, causing dad Phil (Eric Scott Bennett) to walk to the nearest town for help. There he meets a kindly but slightly off old lady called Granny (Liz Little), who says her son works on cars and offers to help them out.

Ignoring every red flag imaginable, the Rockwells end up at Granny’s family dinner table, where they meet the rest of the clan: Brain (Jay Dugré) —or is it Brian? — a seemingly nice young man with a ridiculously oversized cranium; Plates (Bartalos’ Leprechaun collaborator Warwick Davis, who must’ve owed him a favor to lend some star power to his little movie), a cackling maniac whose whole deal is throwing plates at people; and the Surgeon General (played by both Aaron Sims and Kurt Carley), a frightening black-clad killer and the family’s most lethal member.

The Rockwells are quickly dispatched, except for teen daughter Tina (Karoline Brandt), who Brain decides to “keep” in the hopes that she’ll become part of the family. From there, several other groups end up in the family’s murderous orbit, including a delightful geriatric biker gang called The Ancient Ones, who turn out to not be quite as helpless as they seem.

With her family dead and no one able or willing to help her, Tina has to find a way to escape, even as the rest of the family tries to make her just like them.

It’s pretty obvious that Bartalos was a first-time director. 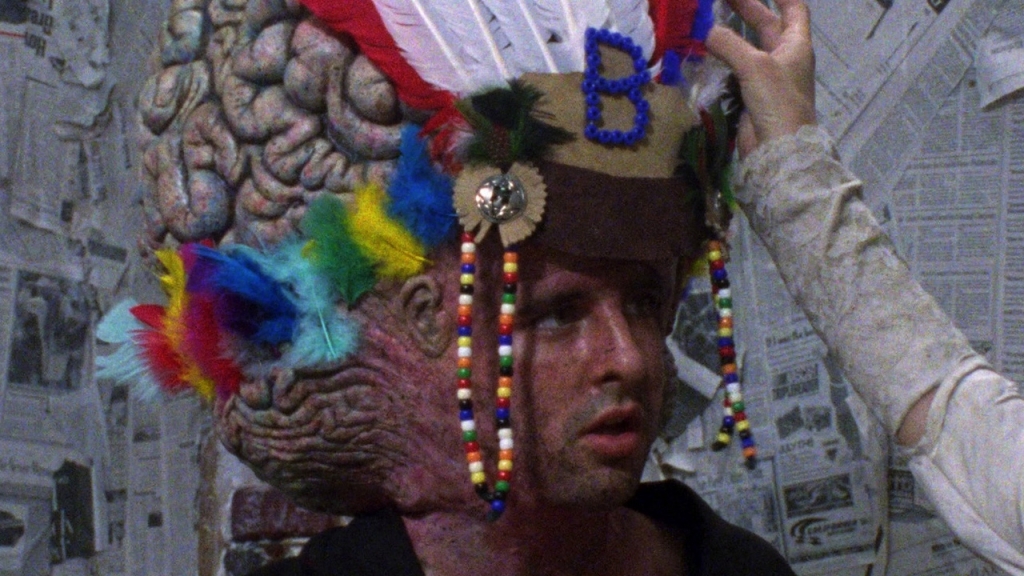 The blocking is frequently very clunky, with people mostly standing around and waiting to be captured or murdered, and the kills are confusingly edited and not staged with any real tension.

The movie has an episodic structure, careening from one set piece to the next like a demented haunted house attraction. As Tina attempts to escape the house, moving through tunnels that seem to lead in every direction, time and space begin to lose their meaning, leaving us as unmoored as the character.

The film flirts with a meta angle with the introduction of The Creator, a mysterious character who is said to be responsible for the Surgeon General, but it doesn’t really go anywhere with it. It does, however, give us another memorable image, this time of a headless bodybuilder endlessly flexing.

Not all of it works. The Surgeon General is an extremely cool costume, with his gnarly mechanical jaw and glassy black eyes, but he ends up being a pretty generic killer, efficiently dispatching his victims with a blade, but not really having any personality beyond that. The costume ends up doing most of the work.

There’s maybe a few too many characters introduced for any of them to serve as anything more than blade (and plate) fodder, apart from the members of The Ancient Ones, whose ranks are filled with charmingly inexperienced but game performers (fun fact: one of the Ancient Ones is played by Forrest J. Ackerman, an editor and literary agent who was instrumental in popularizing science fiction in the mid 20th Century. What he’s doing in this movie, I have no idea).

Where Bartalos really shines, however, is in the film’s visual elements, utilizing the sort of practical effects you’d expect from an industry veteran, and serving up a buffet of memorable images.