We’ve reached the dog days of Summer. This time of year, I often find myself on the couch at night much later than usual because it’s just too hot to sleep. I use these late nights to check out films on my watch list. And August looks to be loaded with a lot of great looking films that are sure to entertain and offer some much needed chills. That is exactly why I do this indie horror release article every month, because there is a ton of content out there — and August is a month that I am very excited about.

So grab a few cold drinks, open the windows to let that night time Summer air fill your room and pick something to watch at home as we take our monthly stroll down the video aisle! 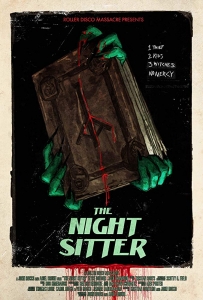 A quick moving beginning with several playful moments hinting that something isn’t quite right kicks off The Night Sitter and sucked me in right away. Bright, comic book colors add to the fun aspect of the film and give it an inviting and adventurous atmosphere. Elyse Dufour as the babysitter is pitch perfect here. She has a trustworthy appearance but can instantly create the up to no good look in her eye to pull off her con artist character. Jack Champion and Bailey Campbell as the two  kids also do great work, with Campbell as Ronnie being pretty funny and getting a few laughs.

The most important aspect of The Night Sitter isn’t the effects or the lighting or the atmosphere, it’s the relationship between Kevin (Champion) and Amber, the babysitter. The chemistry between the two genuinely feeds the relationship in a very touching way. This emotional center is what really makes The Night Sitter work as well as it does. Like Annabelle Comes Home earlier this Summer, The Night Sitter makes the best of it’s one location setting, turning the home into a maze-like haunted fun house. This one is a ton of fun, I highly recommend it!

“A con artist poses as a babysitter to steal from a wealthy occult enthusiast. One of the kids she’s sitting unwittingly summons a trio of witches known as The Three Mothers.” 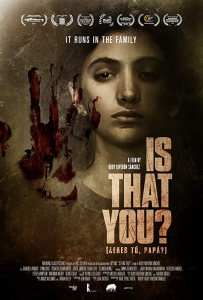 Is That You? is a movie with many secrets. The characters all have secrets from each other, and the film keeps secrets from the viewer. Whatever it was that led to the mom having her ankles tied together and left confined to the house, the film doesn’t share. And it’s scarier for that. The film says right away that evil and injustice exist in this house, proceed with caution. The story unfolds at a deliberate pace, heating up along the way until it boils. And like the frog in the pot not realizing the water is getting hotter, Is That you? sucks the viewer in deeper and deeper until the story has secretly consumed them. Being consumed is what’s at the heart of the film. It’s consumed with lies, secrets, loss, and desperation.

Young Gabriela Ramos gives an absolute knockout performance here, painfully contained as you see a storm raging inside her small, still frame. Her portrayal of Lili vibrates like the evil secrets teeming just below the surface of the film. There’s a scene where Lili and her mother are eating dinner, the two of them dimly lit by a single light above the table. When Lili leans forward and says, referring to her deceased father, “he’s here,” the darkness outside the light surrounding the frame suddenly comes alive with dread. What is this darkness hiding, you wonder. Is That You? is deeply dark, unsettling and lonesome. And deeply breathtaking. I was consumed by it. I can’t recommend this film enough.

“When her father goes missing, 13 year old Lili uses a spiritual ritual to find him but she gets it wrong and her life turns into a nightmare.” 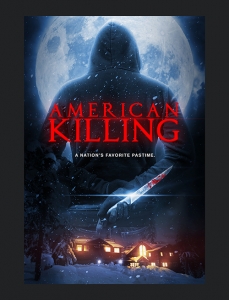 I’ll be the first to admit 2 things about American Killing: it’s not as much fun as the trailer lets on, and it follows a well worn path offering very few surprises. But it’s also the kind of film that leaves you pretty satisfied after watching it, even if you’ll forget about it by the next day. It is fast food horror at its most average.

What keeps it from being too forgettable is the performance from Trevor Peterson as Jeb. He is pitch perfect in his role as a man on the verge of losing everything he’s worked so hard for. Peterson has a boyish appearance that welcomes trust and elicits sympathy. But he also has a mad glint in his eyes, a devilish smirk in his stare. The guy is fun to watch, and American Killing is mostly mindless fodder. But sometimes watching people be terrible to each other doesn’t require a great film. For some fans of horror, that’s good enough.

“A lonely man’s voyeuristic obsession with the private lives of his co-workers spirals into a desperate attempt for attention and a violent spectacle of horror.” 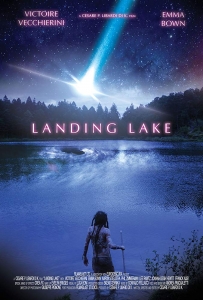 (Available now on DVD and digital)

Landing Lake has a few things going for it, but unfortunately not enough to make it an entertaining film. The biggest obstacle the film presents for itself are the cast of largely uninteresting characters. The story relies heavily on the relationship between the satellite technicians and the crashed airplane survivors, but the dynamic is never interesting or of any real consequence. Anything that happens in the film seems to happen because it has to for the sake of the story.

With that said, there are some cool things going on in Landing Lake. A mysterious signal coming from the lake, time seems to have stopped, an unknown force has hold of one of the technicians, and wonderfully gross and gooey deaths are all worthy moments scattered throughout the film. The washed out, bluish tinted cinematography adds to the lack of time as day and night appear to blend together, while at the same time giving the impression that the characters themselves are under water and held prisoner by the evil force in the lake. Writer and director Cesare P. Libardi di K shows an eye for style, but Landing Lake sinks under its own convoluted plot and throw away characters.

“A team of satellite technicians enter the woods to repair a communication station but are forced to rescue the crew of a crashed airplane. They quickly realize that something may be coming from the lake that is affecting their minds and the passing of time. As they lose their inhibitions their most primal desires take hold. Lured on by the unseen entity it seems that only one of the team is permitted to bond with it and so be reborn in a new physical body. A terrifying game of strategy not to survive, but rather to die with the promise of life anew.”

TO BE WATCHED: MORE GREAT HORROR 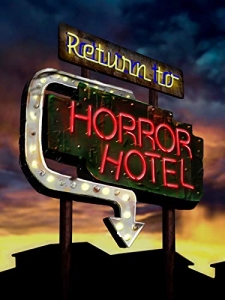 This anthology film is a sequel to the 2016 film Horror Hotel, a film I really enjoyed. Based on the trailer, this go around looks just as messed up and just as fun as the first one! I’ll be giving this one a watch and encourage people to seek out the original as well. 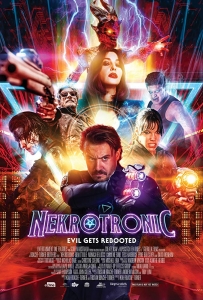 Nekrotronic looks like a colorful blast of full throttle, b-movie, sci-fi fun! Big laser guns, loads of action, plenty of humor, and internet traveling demons. All of this from the makers of Wyrmwood? Sign me up! PS- Watch Wyrmwood if you haven’t!

“A man who discovers that he is part of a secret sect of magical beings who hunt down and destroy demons in the internet.” 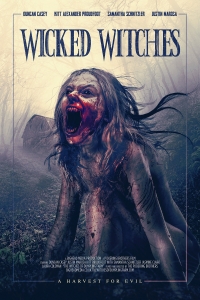 (Available in select theaters and on digital & DVD 8/9)

There doesn’t seem to be any new ground being broken here, but a tale involving witches is always something I’m willing to check out. Wicked Witches looks like a perfect midnight distraction for those hot Summer nights where you’re tossing and turning.

“After being thrown out by his wife, Mark finds himself back in the town of his you, a place of great memories and parties. But things aren’t quite right. His old buddy Ian is possessed by a group of demonic, flesh eating Witches. These beautiful Witches honey trap Mark and his friends to consume their souls.” 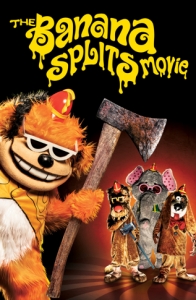 I always remember the giant mouse and other animal costumed people being pretty unsettling at places like Chuck-E-Cheese. This movie is exactly why. Furry, cuddly, kids show animals killing everything in sight looks like every kids nightmare come to life and also looks like a bonkers good time!

“A boy and his family attend a taping of The Banana Splits TV show, which is supposed to be a fun-filled birthday for the young boy and business as usual for Rebecca, the producer of the series. But things take an unexpected turn — and the body count quickly rises.” 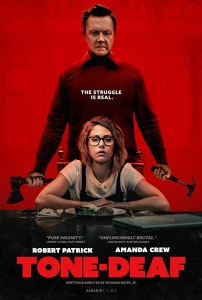 Robert Patrick has that built in look that screams “psychopath!” and Tone-Deaf  looks like it plays that up with wonderful, blood-letting glee. That’s enough to plant my butt on the couch for this one but the trailer also flashes plenty of curious supernatural and crazy looking scenes that get me even more excited for this one.

“A woman goes to the countryside to spend a quiet weekend after losing her job and having her latest relationship implode. She rents a country house to an old-fashioned widower, who struggles to hide his psychopathic tendencies.” 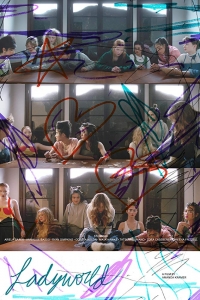 The Lord of the Flies meets Whatever Happened to Baby Jane? vibe from this trailer is absolutely stellar, but it’s the underlying threat of a hidden intruder that seems to derail the sanity of the girls and really turns Ladyworld into what looks like a wild and powerful experience. This one is a must see this month!

“Eight teenage girls become trapped in an endless birthday party after a massive earthquake. Psyches and sanity dissolve as they run out of food and water. Eventually, they regress to their baser instincts, exploiting each others fears and insecurities.” 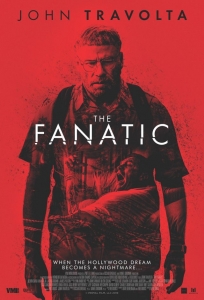 (Available in select theaters and on digital 8/30)

Wow, does John Travolta look to be doing some very interesting work here. He seems to be pulling a Jake Gyllenhaal: quirky, image altering, offbeat character work with noticeable physical choices — and I’m very excited to see what he does with this role! Limp Bizkit front man Fred Durst shows some promise with his directorial debut. 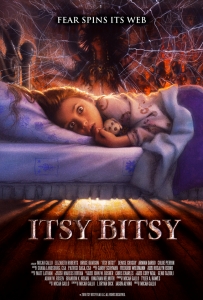 (Available in select theaters and on digital 8/30)

Demons, ghosts, zombies, monsters…these are nothing compared to how utterly terrifying and gross spiders are! This trailer has a lot of creepy crawling eeriness and I shudder just seeing that giant spider slink its way behind a curtain or chilling in the tub. Itsy Bitsy looks like a face contorting, body cringing, peeking-through-my-fingers-at-the-screen good time.

“Based on the centuries old poem, a family moves into a secluded mansion where they soon find themselves being targeted by an entity taking the form of a giant spider.”