Down the Video Aisle: October 2019

We’ve reached the month we’ve all been waiting for: October is here! This is Christmas time for all horror fans, the most wonderful time of the year. For many this month is a viewing frenzy of horror films, whether it be old favorites like Halloween and Night of the Demons, or tuning in to watch whatever is playing on AMC Fear Fest (104 titles are set to show this year starting October 13).

An exciting addition to this year’s Halloween season viewing is a dose of nostalgia with Nickelodeon’s limited revival of Are You Afraid of the Dark? on October 11th, count me in for that.

I have just one suggestion for the October movie watching extravaganza this year: Replace one movie you’ve seen a thousand times with just one title from this month’s new releases. There’s a number of spooky and fun films hitting VOD that are worth checking out, so why not give one of them a shot? That said, let’s start our Halloween walk down the video aisle and pick out a film or two!

(Available now on VOD and DVD) 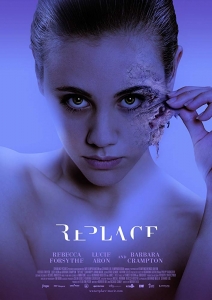 Replace is a nice twist on the vampire story, but instead of fresh blood to stay alive, Kira requires fresh skin from her victims. Sounds a bit more messy than simply biting a neck, but the film is much more than a gore fest and has plenty to say about life and death.

Kira is an intriguing character and is played with a quiet bewilderment by Rebecca Forsythe. When her friend cuts her foot on some broken glass, the sight of skin stuck to a shard stops her eyes from moving, captivated by the fresh replacement before her. It’s a great moment for Forsythe, who flashes a wild discovery in her eyes, a moment of re-evaluation of what she needs to survive. There’s a wonderful scene in a morgue, Kira walking through the corpses doused in green light as layered organ music plays underlined by a steady, mechanical sounding heartbeat. The scene invokes rebirth as she cuts a swath of skin from one of the bodies in a Frankenstein-like attempt to complete her body. But the dead skin doesn’t take and, like Dracula, she needs the flesh of the living.

This is when Replace delves into the darkness of vanity, taking the lives of others in order to maintain a beautiful and youthful appearance. There’s a scene of Kira looking in the mirror and when her image reflects an old version of herself back to her, she screams at the sight. It’s not that Kira is dying, it’s that she’ll look like a monster if her skin condition continues to crust over her body, something she’s not willing to live with. Even her doctor (the great Barbara Crampton), can only seem to do so much for her. Although her interest in Kira seems to run deeper than just being a patient, and her too calm demeanor is an alarming mix of sweetness and mild obsession, adding an element of unknown danger.

All of this is quite the cocktail for the haunting journey of a young woman forced to watch her body decay, threatened to lose her looks decades before wrinkles naturally appear and take deadly measures because of it. Much is revealed as Replace unfolds. Themes of aging, memory, ghosts, death, vanity, love, and loss are all explored with a unique vision. The final act, despite a hiccup or 2 in pacing, is an exciting and surprising odyssey of revelation, a great and unforeseen ending to a provocative science fiction thriller with a strong message: Replacing what’s on the surface will conceal truth for only so long when what’s underneath is rotten.

“Kira’s skin starts to age rapidly, dry out and crumble away. But then she discovers that she can replace her own skin with somebody else’s.” 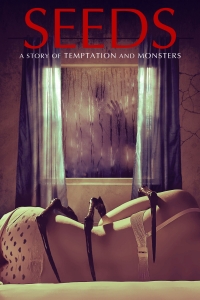 There’s an uncomfortable heartbeat to the film from very early on that is shrouded in the niceties of familial relationships. Trevor Long is wholly appropriate in the role of Marcus, a man who struggles to keep a “normal” life, but ultimately has plenty to hide. Long inherently possesses a cautious appearance, with his drawn face, receding hairline, and naturally down-turned mouth and eyes categorizing him as someone who needs to be given time before being trusted. The fact that Marcus has dreams of peeking in on his grown niece, Lilly, when she takes a bath or listening to her through the door as she actually does, doesn’t help. Seeds is about secrets of the deepest kind, of monsters, and they lay in wait of discovery at every turn.

But Long is talented enough to play Marcus as both a victim and a perpetrator, and his performance creates the driving conflict of the film eliciting both sympathy and disgust in tandem. The film also frames Marcus as both victim and perpetrator and doesn’t shy away from showing the beauty in even the most cringe-worthy moments. It’s a daring examination of temptation, forbidden attraction and the monster inside of a man on the brink of getting out.

Andrea Chen as Lilly confidently captures disturbing, fetish-like child qualities combined with adult know how, a mix that stirs up the secret desires within Marcus. She’s no little girl anymore, but Lilly knows how to manipulate her uncle into remembering her when she was, only now she has the figure of a grown woman to fuel the fire.

Seeds is a beautifully shot and compelling debut from writer and director Owen Long. A very dark mystery that observes the desires that live deep inside of us, of fighting to no avail and succumbing to temptation. And while some act on it and others don’t, perhaps the seeds of monsters are in all of us.

“When his increasingly depraved behavior spirals out of control, Marcus retreats to his family home along the New England coast. But instead of finding solace, Marcus is haunted by his darkest fears and deepest desires.”