Down the Video Aisle: November 2019

For a lot of us, November always has that Halloween hangover feel to it. No more “scariest movies” lists, no more Halloween episodes of TV shows, and no more spooky-cool, orange, purple, and black seasonal sections in just about every store. But November has always had a special place in my horror loving heart. With the bright Autumn colors of the trees quickly draining to a lifeless brown, the skies taking on a lonely gray, and the air cooling faster than a fresh corpse, November seems like the best month of the year to watch horror films.

So let’s roll like a severed head with the Halloween spirit, revel in the tomb-like atmosphere that is November, and take a stroll down the video aisle to pick out some movies to watch because there are some good ones this month! 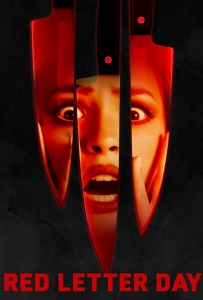 The introduction to the main characters is a refreshing sequence showing Melanie, a mother with her teenage son and daughter actually getting along as they eat breakfast and start their day. Once the red letters arrive in the mail, the survivalist aspect of the story kicks in to high gear and we immediately feel a bond with these characters. The stakes are raised, the tension is established, and their survival becomes ours in the ultimate nightmare scenario. Because on Red Letter Day, neighbors are enemies and no one can be trusted.

Dawn Van de Schoot as Melanie steals the show. Her performance is incredibly charismatic and genuine. She’s a mom whose kids are threatened. Once that happens, Van de Schoot turns Melanie into a reluctant warrior who knows she’s stuck in a game she didn’t start, but knows she has to finish. The character of Melanie also makes a hero out of a parent, a title in film that lately has been monopolized by people in goofy costumes with magic shields and hammers.

At a speedy 75 minutes and operating in real time, Red Letter Day is brief window into an alternate world where the anger and violence brewing inside of people takes over in a scary way. What’s scarier is that this mentality and practice feels closer than we pretend it is. It’s a crazy world out there, and Red Letter Day tweaks it a little bit to show us just how scary it can become if we let it. It also shows us what really matters in life, regardless of what a piece of paper says. (4/5 Butterflies)

“While adjusting to a new life in a quiet suburban community, a recently divorced mother and her two teens receive mysterious red letters instructing them each to kill or be killed.” 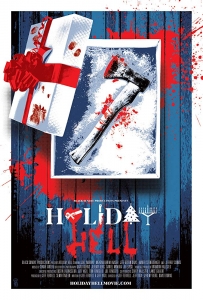 (Available now on Tubi, available 11/5 on VOD and DVD)

Every anthology movie needs strong wraparound sequences and/or a strong presenter of each story, and Jeffery Combs provides both in Holiday Hell. His curiosity shop is a treasure trove of cool, freaky knick knacks and Combs has always been an interesting actor.

The first story is a promising one featuring a pretty creepy masked killer and some good old fashioned slasher fun. The next 2 are just as good with one about a killer doll and the other about a pushover office worker who’s had enough. The 4th installment is the most different of the bunch in terms of tone and at first seems a little out of place. But it’s pretty damn good so the difference in tone is quickly forgotten.

Most of the characters in these stories are run of the mill assholes, and when one yells to another, “I hope you fucking die,” you couldn’t agree with her more. But the cast is so damn good at playing these assholes that Holiday Hell is a really fun time. Not to mention the stories are pretty great with not a weak one in the bunch, and I was more than impressed with each segment.

This is a stellar anthology movie where the wraparound segment and stories in between are all equally great and play as a surprisingly strong cohesive tale. Put Holiday Hell on your watch list this season, it’ll leave your horror heart merry and bright. (4/5 butterflies)

“A mysterious shopkeeper narrates four horror tales, each set during a different holiday.” 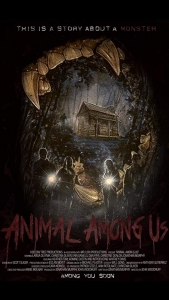 Animal Among Us nails the feel of a classic slasher/monster flick and successfully balances the mystery of a murderous monster with interesting and complicated characters. Larisa Oleynik is razor sharp here, playful when she wants to be, and no nonsense when she needs to be. She plays her character with wonderful awareness, hinting at something hidden below the surface, simultaneously pulling the viewer in and pushing them away. This is the distant yet charismatic ability Oleynik has possessed her whole career, and it serves her character and the film well.

I was really surprised by how layered the characters were and how entertained I was by the film. The script unfolds beautifully, showing just enough glimpses of the monster and kills to keep us interested, while at the same time opening the lives of the characters showing their dark sides, vulnerability, and adding depth to the story. It’s also subtly very funny at times.

One male character in the film doing research for his blog on the legendary monster of Merrymaker Campground is even wearing short, Sleepaway Camp style shorts. Details like that make me smile. Animal Among Us is a solid slasher mystery with impressive work from Larisa Oleynik, I recommend it! (4/5 butterflies)

“Fifteen years ago, two teenage girls were murdered at Merrymaker Campgrounds. The case was filed an animal attack, the camp was condemned and the killer never found – but something horrific still waits in those woods.”

<iframe loading="lazy" title="ANIMAL AMONG US