The scariest horror story was easily 2020, but these indie fiction gems provided the perfect thrilling and chilling escape we needed.

A “best of” list for 2020 feels like an oxymoron. With everything that happened last year, it feels strange to be compiling any sort of tribute. However, despite the challenges and tragedies of 2020, genre entertainment continued to flourish — .and none more so than the independent horror fiction scene. The year saw a diverse, exciting, and groundbreaking amount of work from established and new authors. In fact, it would be impossible to encapsulate all of the books that deserve to be on this list.

The selections below are subjective, limited, and based on the work that I’ve been able to read. That said, I think these books are a representation of the quality of independent horror fiction. Each of these stories are groundbreaking in their own way and they represent some of the best that horror has to offer.

I’ve listed them in no particular order and offered some honorable mentions at the end. 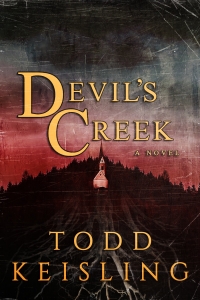 Jack Tremly returns home to pay respect to his grandmother, but coming home means facing his family and the cult that once fought to sacrifice him to a terrible god.

Devil’s Creek feels like Salem’s Lot (1979) and Helter Skelter (1974) had a child. It is a wild ride through radical, deadly religion and the unique experience of returning to a traumatic hometown. The novel is visceral, unique, and powerful. Keisling manages an intimate story, but keeps a steady hand on the tension. He knows when to turn it up and settle it down. The whole book is a joyous ride to the finish. 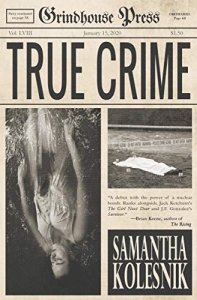 When they can no longer handle her mother’s abuse, Suzie and her brother embark on a cross country murder spree. How long can Suzie maintain sanity as the bodies continue to pile up?

This book broke me in all the right ways. Kolesnik is a gleefully subtle writer. She slips in gruesome realities without shock and awe. The resulting tension creates a continually eerie atmosphere that rarely happens in novels. True Crime rediscovers and reinvents the unreliable narrator, but it is also nimble enough to subvert expectation and to deliver a powerful story.

3. Night of the Mannequins by Stephen Graham Jones 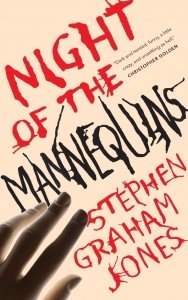 A prank goes terrible wrong and Sawyer plans to fix it. Whatever it takes, he will save his friends and their families. He will be the hero, even it if means becoming the villain.

Stephen Graham Jones is getting a lot of attention for The Only Good Indians (2020) and that attention is well deserved. However, Night of the Mannequins is proof that Graham Jones put out two outstanding pieces of fiction in the same year. Night of the Mannequins is a full-throttle thrill ride from start to finish. It interrogates the slasher genre and overturns every expectation. It’s the one book on this list that I started re-reading as soon as it was finished. It is that good. 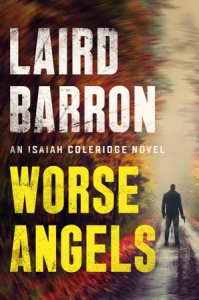 Isiah Coleridge is hired by an ex-corporate bodyguard to investigate his nephew’s murder. Things take a sharp turn when Coleridge is faced with a town’s dark secrets and an ominous, abandoned supercollider project that may have awakened something terrible.

Quick caveat: Worse Angels is the third novel in the Isiah Coleridge series. That’s not to disparage the success of the book. Instead, it is a signal to pick up all three in the series.

Worse Angels is that most recent culmination of Barron’s slow burn from noir to horror. Readers may know that Barron started in the horror genre and moved to crime with this most recent series. Worse Angels does the most work to blend those borders and drag noir into the cosmic horror realm. And it’s a masterwork. Worse Angels is the best book in the Isaiah Coleridge canon and it feels like Barron is just getting warmed up. 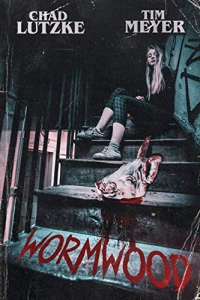 Baker Gray is new in town. When he meets Cassandra, things start to change. He starts to feel things that he’s never felt before and he starts to do things that, with any other person, would feel wrong. Baker finds that passion will take him down a dark road where blood is art and revenge is deadly.

Wormwood is the horror bildungsroman that we need. Lutke and Meyer created a truly unique story that compels its reader from the very first sentence. There is a magnetism to the characters that cannot be discounted, but it is the way that Lutzke and Meyer lead their reader through violence and trauma that is so impressive. Despite how gruesome the novel gets; we always understand why Baker continues to dive deeper into the abyss. It’s not an easy feat to keep a sense of rationality and realism in the horrific. 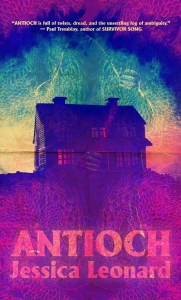 Bess is obsessed with Amelia Earhart’s disappearance. It’s a mystery she tries to solve in the small hours of the morning. But when she picks up a signal on her short-wave radio, she finds herself entrenched in another enigma. This one involves an abducted woman and a serial killer running rampant.

I was checking the locks on my doors by page 30. Antioch is Leonard’s first novel and it does not feel like it. She leads her reader through a tight, paranoid story with a deft hand. Not only is the book frightening, it also creates and interesting and exciting mystery. It’s a true page turner and a fabulous debut for Leonard. We can only hope to see more from her soon.