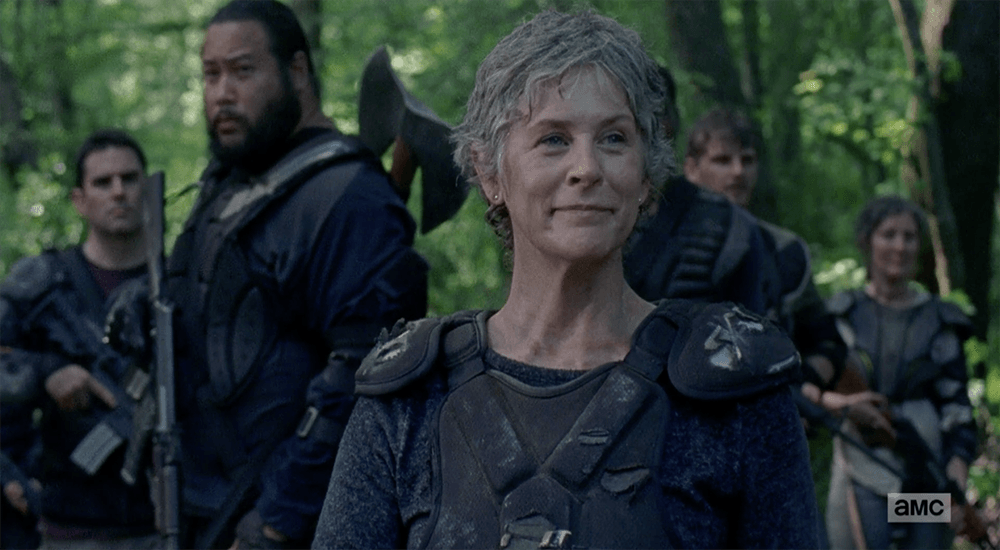 Salutations, fellow purveyors of morbidity! We’re back with another recap of this fragmented war of ours. This week’s episode is a bit less tangled, which is a welcome change.

We begin with Ezekiel and all the king’s men. Once again, Zeke reminds us that he is still smiling as he encourages his followers (and Carol, also smiling) to stand their ground as Negan’s men approach. They have the numbers, but Zeke has a strategy — one that if followed precisely will result in zero casualties for his men.

Fortune has favored them thus far, as Ezekiel so eloquently words it in a matter that only he can. We see flashes of these attacks as the king’s knights are ambushed, but not without turning the tide with ambushes of their own. After the smoke clears, Zeke flaunts their victory. “We move onward!” he yells as Shiva roars in CGI approval. 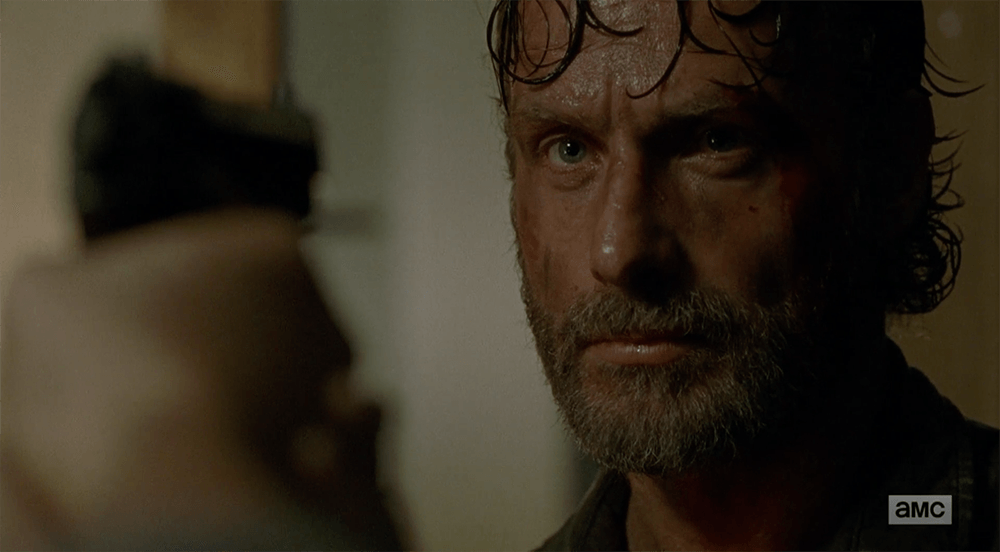 We cut to Rick with a gun pointed at him by his old friend, Morales. “So you’re the man from Alexandria?” he exclaims. They reminisce about the monsters they have become, and Morales issues some threats before informing Rick that he’s a prize around these parts — as he, along with “the widow and the king” — are to be captured alive if possible, as per Negan’s request.

Meanwhile, the Red coats/cannon fodder continue firing their guns relentlessly at the camera, while barely hitting anything for the third episode in a row. We see more walkers decimate the opposition, and they take the opportunity to move forward in their assault on the compound. Aaron helps his injured lover, Eric, to a tree to tend to his wounds in a genuinely heartbreaking moment where Aaron blames himself for all the pain Eric is enduring. 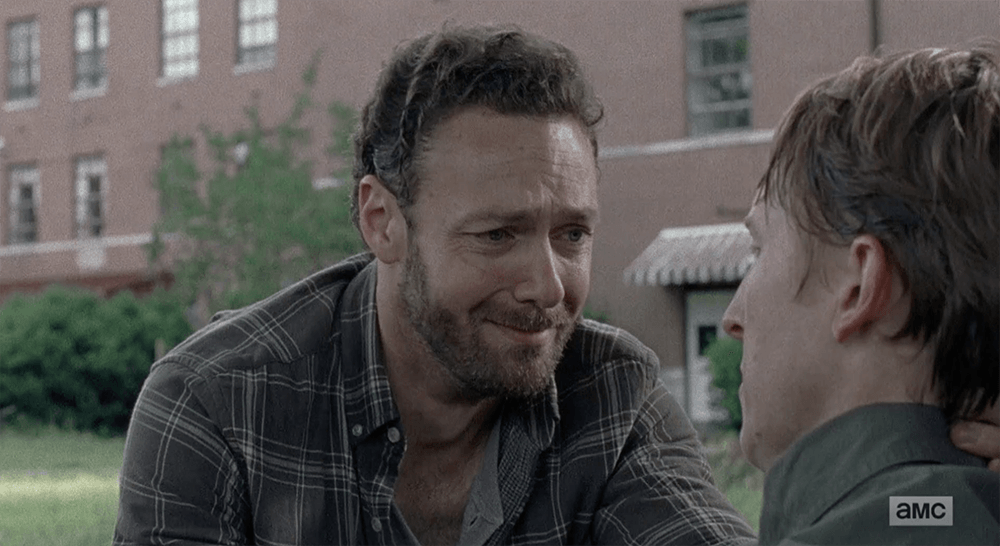 But Eric isn’t having any of that and tells Aaron, “Stand your ass up; Get back in the fight, and win this thing!” They share a passionate kiss, and Aaron goes back into the fray.

Tara leads their P.O.W.s on the long march back to the Hilltop, while Morgan and Jesus continue to argue over the concept of mercy toward their newly acquired prisoners. Great points are made by both sides, with Jesus claiming they both have blood on their hands. Yet, cold-blooded executions are an idea they shouldn’t even entertain. 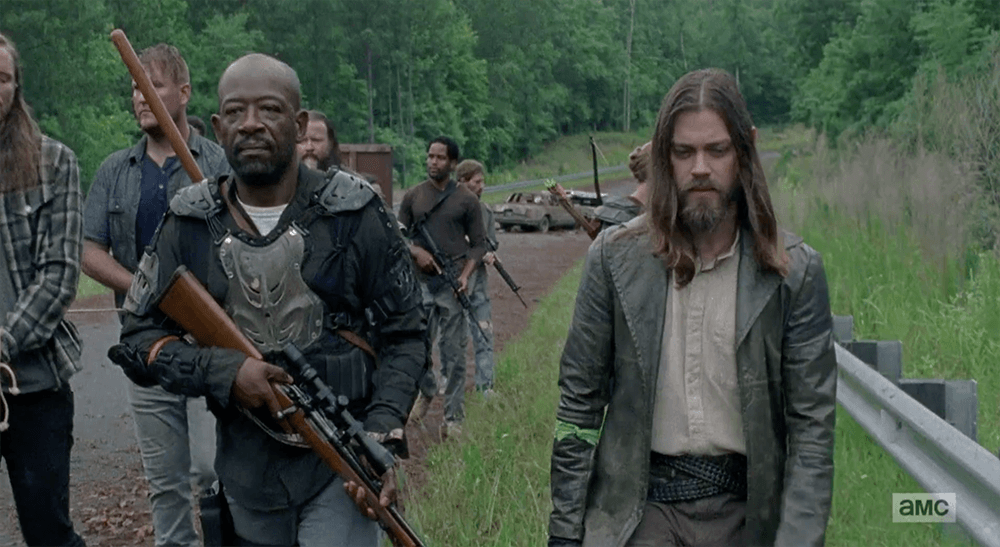 Back at the Rick and Morales standoff extravaganza, the two converse about the mutual loss they’ve both experienced. Rick tells him the details of Glenn’s demise and how Negan bashed his brains to a pulp in front of his pregnant wife. Morales seems dumbfounded by the fact that Glenn had a wife, to which Rick explains that the two met after the proverbial shit hit the fan.

Morales is even more perplexed by the fact that love can bloom on this convoluted battlefield. We then discover that Maggie is the aforementioned “Widow”. Rick, upon sharing all this gruesome information, simply asks Morales, “Are you Negan, too?” Morales explains to Rick that, prior to joining the saviors, he had given up on everything he held dear. They found him and took him in, thus giving him a reason to live again. So, yeah, “I am Negan,” he says proudly. 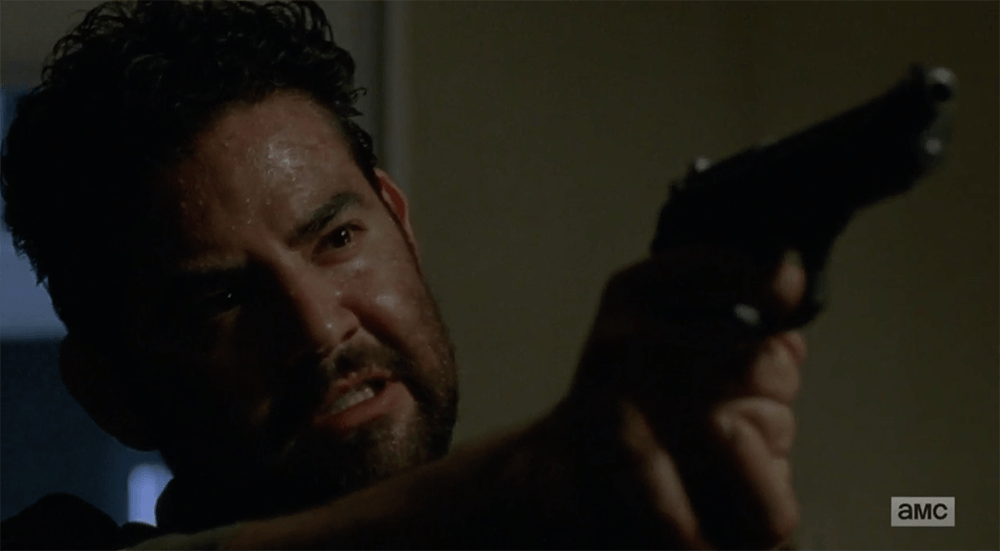 They continue their moral quandaries, and Rick tries desperately to separate himself from the similarities they so obviously share — to make Morales see the error in his ways and possibly bring him back on his side. When Rick suddenly yells, “WAIT, NO!” As Daryl fires a crossbow dart into his neck, killing him instantly. “But that was…,” Rick says. “I know who that was,” interrupts Daryl coldly. And just like that, a window into Rick’s past closes, thus killing “Officer Friendly” for good.

We find out the guns they were looking for are not there…but the saviors are! 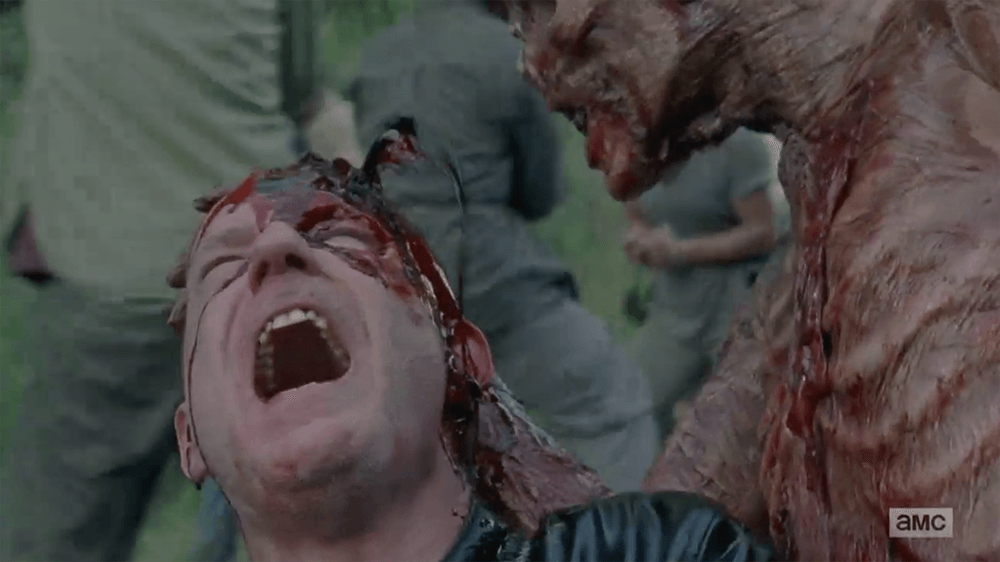 Back at the P.O.W. parade, they are suddenly attacked by a group of walkers doing their best damn Lemmings impression as they roll down a hill comically to reach reach them. Morgan, Tara, and Jesus make short work of them in unsurprisingly visceral fashion. The prisoners take this opportunity to try to escape by running into the woods, and Morgan gives chase. He reaches them and eliminates one of them, much to Jesus’ dismay.

As a result, the mercy argument manifests itself once more. “There’s war and there’s peace. We’re gonna have to find a way to live with these people once this is all over,” states Jesus. Morgan doesn’t have time for any of that shit and just lunges at him, and another prime example of “dick measuring” ensues. 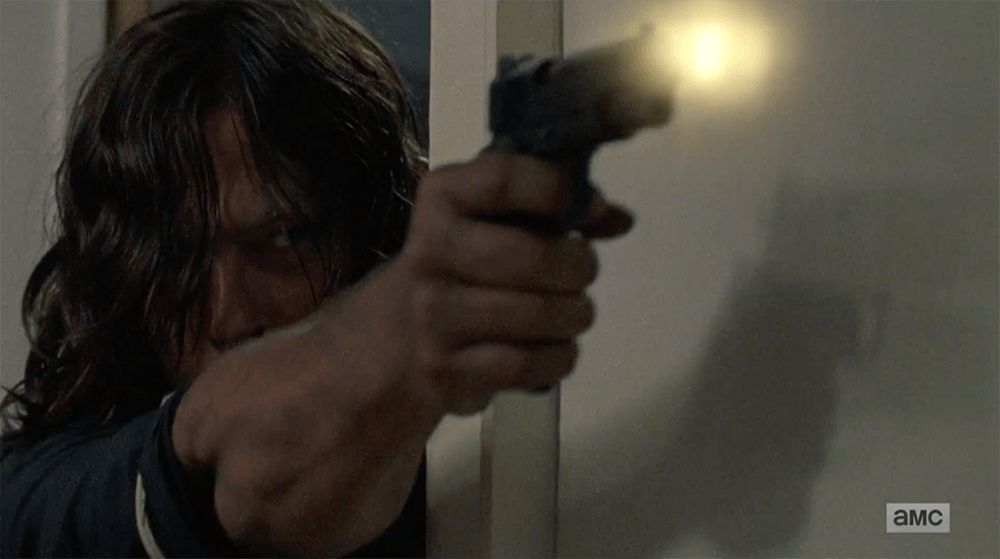 Meanwhile, Rick and Daryl fight their way out of their predicament, and Zeke and his men gain small victories against the saviors as they march on.

Jesus and Morgan continue their admittedly impressive, albeit unnecessary melee, which ends in Morgan confessing that he’s “not right” in all the possible ways imaginable at this point. But “I’m also not wrong,” he says. Tara reassures him that he is, in fact, right, and Morgan just walks away into the wilderness. 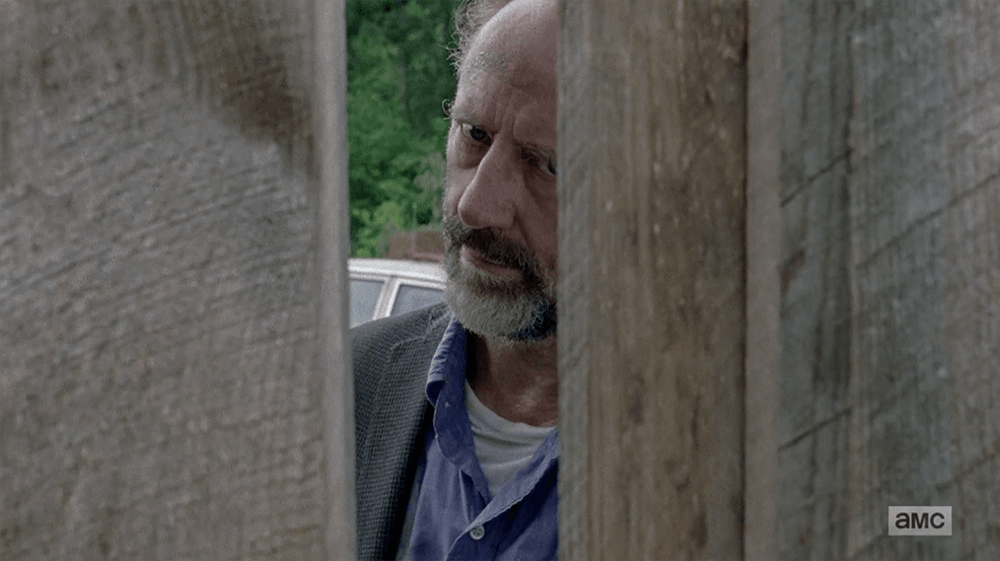 Back at the Hilltop, a surprise visitor approaches the gate. It’s our favorite doctor turned Judas, Gregory! He pleads — no BEGS — Maggie to let him back in. She is clearly disgusted by his very presence, but she eventually lets him back in. Just as she does, Tara, Jesus and their prisoners arrive as well.

We are treated to yet another argument concerning Mercy for these people. They arrive at the conclusion that they will be kept alive, hopefully finally ending said arguments. We also FINALLY arrive to the end of the compound battle, as Rick surveys the massacre, taking pictures of the carnage like the avid wartime photographer he has clearly become.

Aaron goes to check on Eric by the tree where he left him, only to find that he has already turned and is shambling away, reminding us of how unconventional death really is on this show — and how heart wrenching it is to watch a loved one become this perversion of reality. 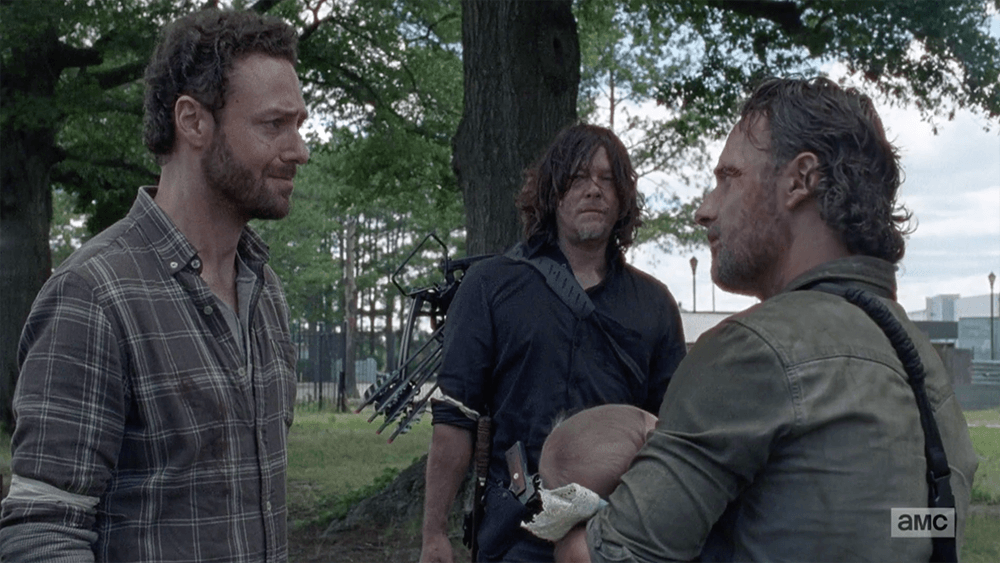 Rick approaches Aaron, Gracie in his arms, and tells him to take her safely to the Hilltop. (I have to say, I’m really glad Rick didn’t just leave that damn baby there. I really thought they weren’t going to touch on the subject again…it was a legitimate concern of mine). Daryl and Rick are fired upon by a lone gunman cowering behind a tree. Rick pleads with him to come out and he won’t be hurt, giving him his word that they just want information. He points out the man is clearly outnumbered, and, hell, they’ll even throw in a car for his troubles.

The man obliges and informs them that the weapons they are looking for are being transported West. Rick immediately shoots him down. So much for his word! 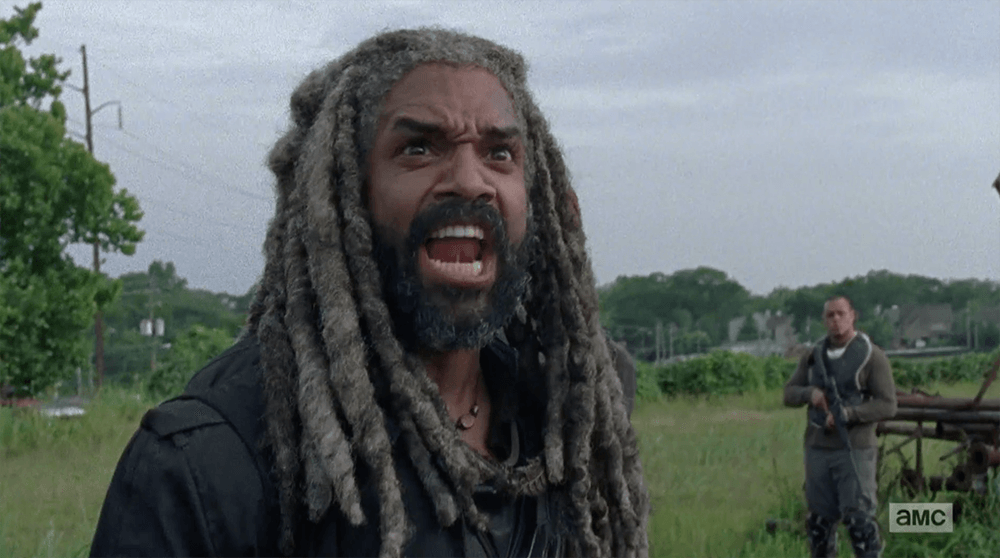 Finally, we are taken back to Zeke, Carol and the Knights where they are celebrating their successful skirmishes without casualties. They sweep the area only to be ambushed by a group saviors who rain Automatic gunfire at everybody.

The screen goes black as we are left, again, uncertain as to their future, which is pretty par for the course at this point.

There honestly was nothing noteworthy to say about this episode. The mercy argument is getting stale. It’s a concept that has been used and abused. I’m not entirely sure where they’re going with it, but I hope they get there soon. The absence of Negan for yet another episode is another in a long list of disappointments and, as a result, so is the fact that we still have no fucking clue as to Gabriel’s fate. 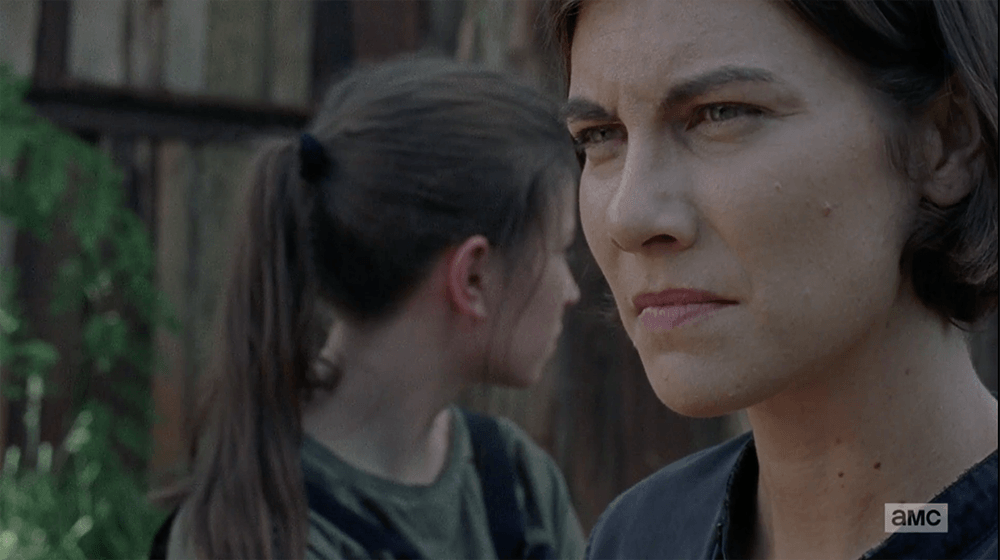 I really hope we don’t have to wait until the midseason finale for any real resolutions, as that will generate all sorts of familiar backlash. All in all, this was another weak offering in the war that was promised — padded with yet more filler and even less walkers. One can’t help but wonder if the overinflated cast of core characters may be a hindrance at this point of the game.

And with that, I leave you, till next week, friends. May something happen!