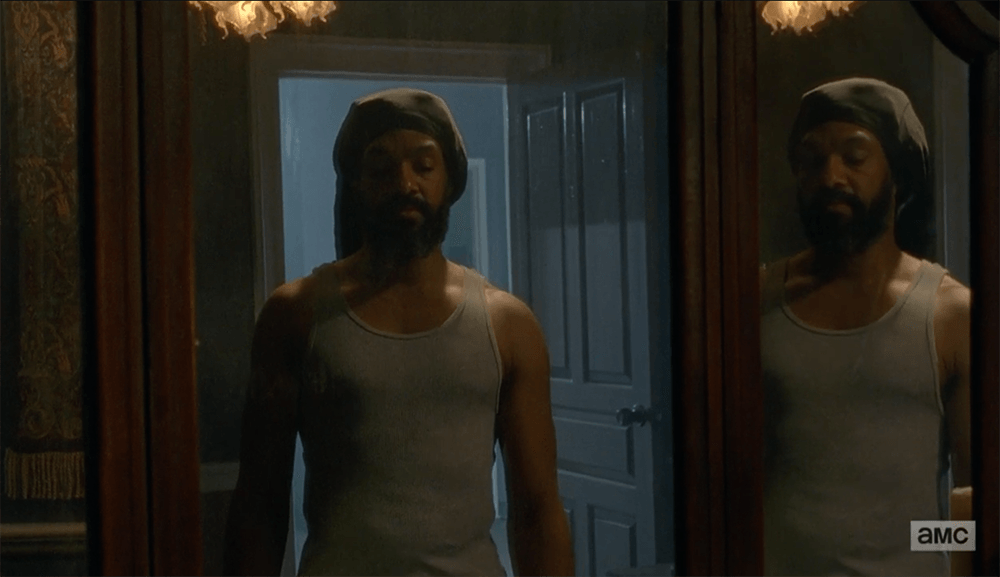 Greetings! We’re at it again, and I’m happy to report that things actually happened this time around in an action (and more importantly walker) packed outing that was the strongest of the season thus far.

We start with yet another flashback, this time of Ezekiel and his Knights as they make preparations to head out on the excursion we previously left them on last week. A sense of dread looms as Bear Mcreary’s score drowns out the sound and leads us into YET ANOTHER DAMN “AND STILL I SMILE” SPEECH! It’s a fine speech that does well in continuing to showcase the sense of dread and urgency, if only a bit trite at this point. 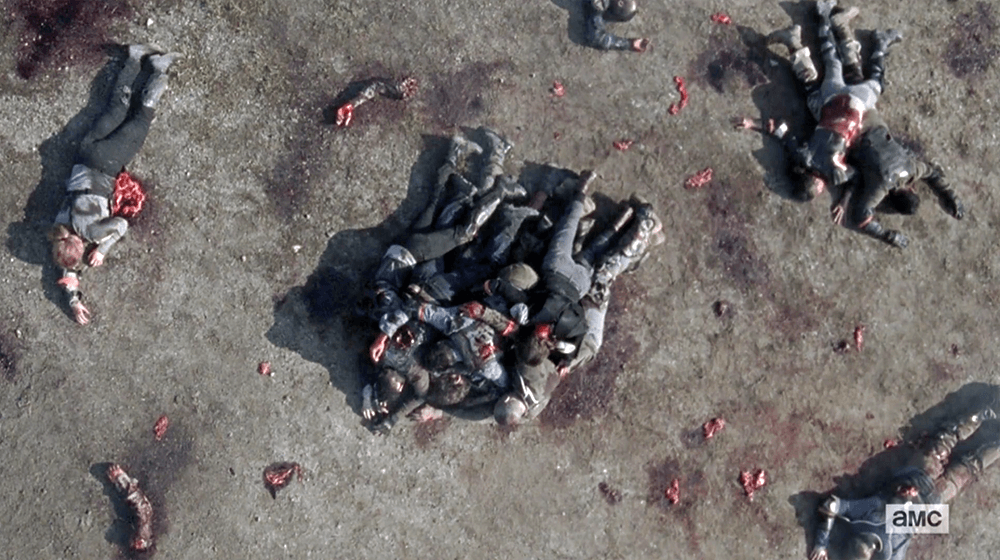 The king and his knights huddle at the end of the speech, the camera zooming over head. We transition seamlessly from the huddle to a puddle of blood and body parts beautifully. A lone figure climbs out of the huddled masses in true Jon Snow fashion after his bastard filled romp. It’s Ezekiel, and he’s alive…unsurprisingly!

Zeke slowly realizes that all his men are dead. The anguish upon this realization is clearly evident, even painful to witness as he surveys the area — catching small glimpses of the small nuances who made all of them individuals, and the stark contrast of what they are now, as they rise, devoid of life with an insatiable hunger for their former king. Ezekiel tries to stagger away, his leg pretty banged up, when he is suddenly saved by one of his followers who survived the massacre. 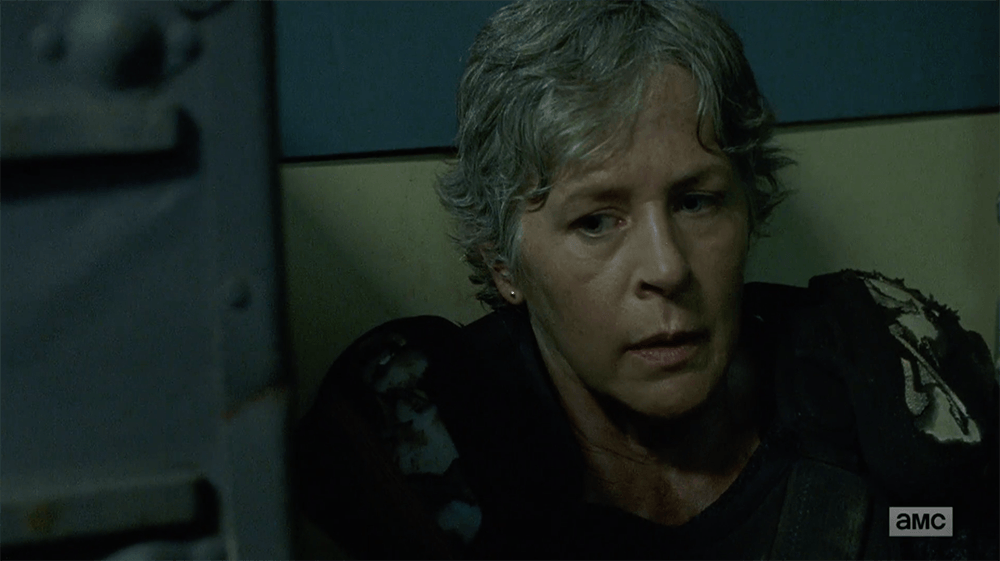 We cut to a splinter group of saviors who evidently have the weapons everyone has been after. A barrage of bullets annihilate them, as they are conveniently standing like literal ducks in a row. A ceiling tile slides over, and Carol emerges in true Solid Snake fashion. Carol doesn’t have time to grab the weapons, as another group spots her and opens fire on her.

Back outside, Ezekiel is being aided by his new bodyguard when a mysterious shot quickly eliminates him. We learn that this shot came from a seriously creepy dude, bearing a striking resemblance to a young Jeffrey Dahmer. Jeff quickly takes Ezekiel hostage, but not without taunting Zeke by attacking his leadership skills, going so far as to calling him nothing but a con man. All this is happening while a horde of walkers comprised entirely of the King’s men give chase to them, in a striking bit of irony. 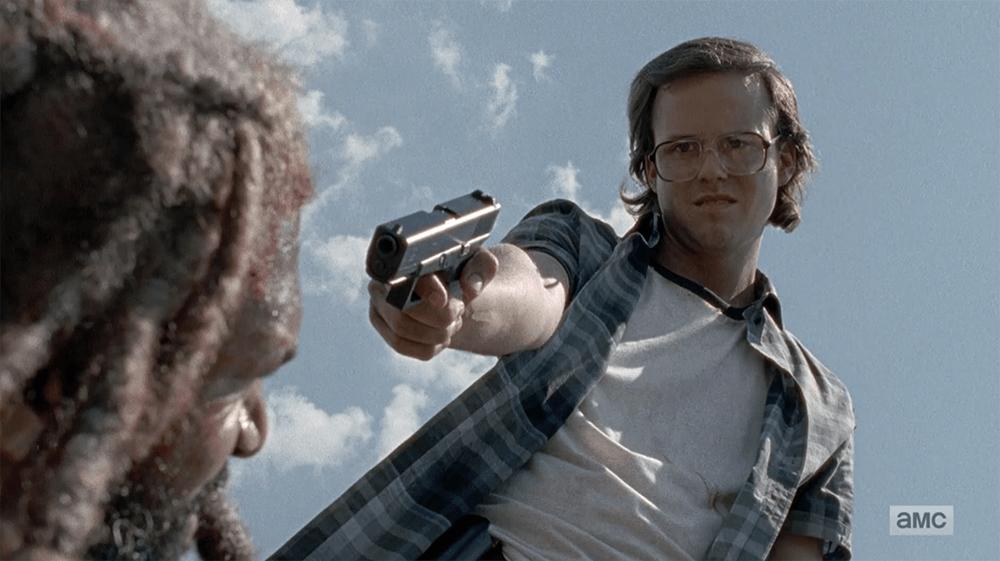 We are taken back to Carol’s one woman army, as she quietly observes the saviors loading several boxes of military grade weapons onto a truck when she is suddenly spotted and fired upon relentlessly! Her only choice is to a hide behind a nearby pickup truck. Just a few feet away, Ezekiel sees a chance to get free of his captor and takes it; Slashing at him to no avail as he is quickly put down.

Young Dahmer is not happy, exclaiming the importance of keeping Rick, the widow, and Zeke alive. But, he also acknowledges that Negan would probably be as happy with Ezekiel’s head on a pike. Just as he says this, young Dahmer is swiftly bifurcated by Jerry and his battle axe of badassery in graphic and admittedly satisfying manner! I’m glad Jerry got his time to shine, as he is criminally underutilized. 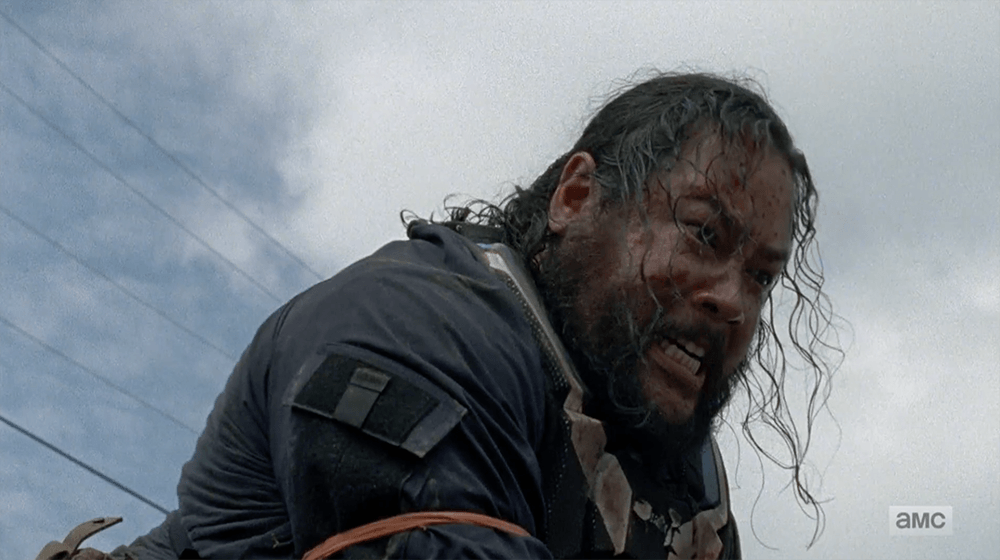 Carol, still suppressed by gunfire and clearly out of options, surrenders. She offers the location of her friends in exchange for freedom. This is obviously a diversion, as she takes a hostage of her own. This gives her the opportunity to open a nearby gate, unleashing a hungry group of walkers on the unwitting saviors. Ezekiel and Jerry are pinned down between a fence and all the king’s knights. Hope is visibly lost as Jerry and Zeke accept their fate. Carol catches a glimpse of them from a short distance, thus triggering a flashback… here we go again!

This time it’s of her and Ezekiel. He reveals that, in his previous life, he was a zookeeper. On one memorable occasion, he encountered an injured tiger in dire need of help. He confesses that, in that moment, only two choices presented themselves; Do nothing, continuing the tiger’s pain, or leap into action and aid the tiger in a selfless act. He chose the latter, to “be a hero” as he put it. That was his defining moment, the moment he became the man he is now. 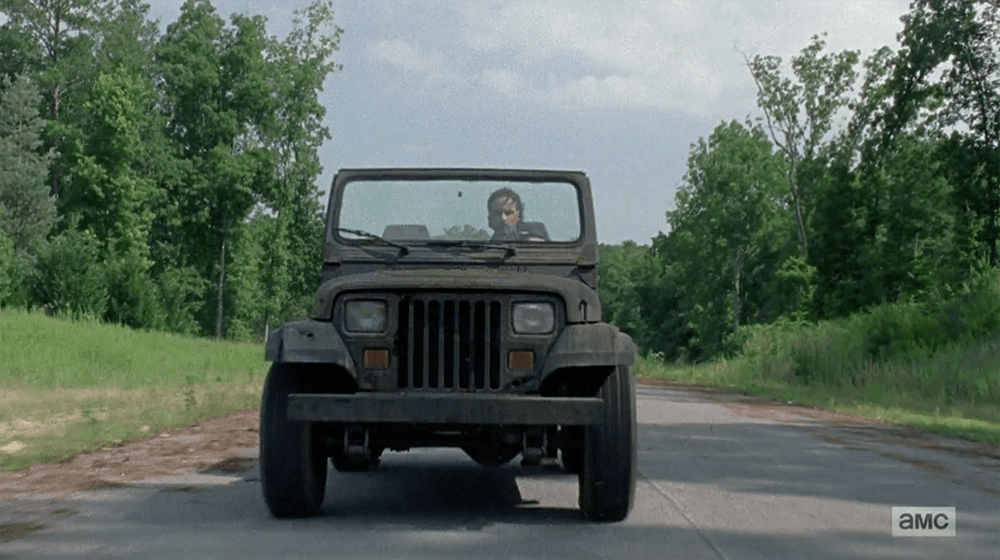 We are taken back to the present, with Ezekiel facing his reanimated men. Just as they are about to consume him and Jerry, they are swiftly taken down by Carol — who chose to save them instead of going after the truck carrying the weapons. We see the truck barrel the hell out of sight. Just as we do, a motorcycle is heard in the distance, much to Carol’s delight. We cut to a shot of the truck being chased by Daryl in the aforementioned chopper, Rick in an army jeep following suit.

Shit is clearly about to transpire, judging by the look on their faces. A mounted machine gun emerges from the back of the truck and opens fire on Rick and Daryl, consequently knocking Daryl off his bike. Rick avoids the gunfire lining himself alongside the jeep and jumps in! He takes out the driver before careening over a barricade and crashing on the side of road. He emerges unscathed, and we are now in possession of a shit ton of weapons. Huzzah! 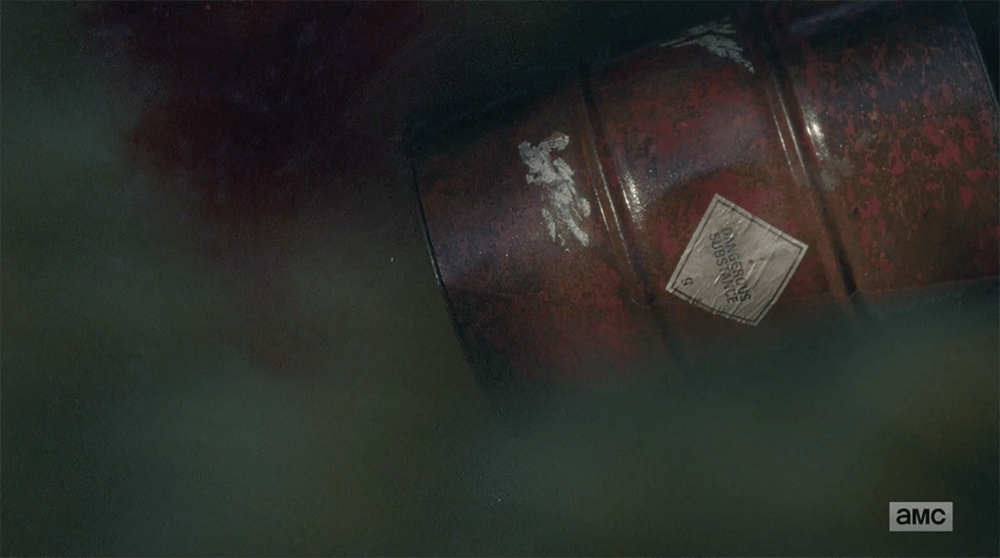 Meanwhile, Carol, Jerry, and a severely injured and fatigued Ezekiel continue their escape into a wooded area that looks to be a dumping ground for dangerous substances as clearly evident by a barrel that literally (I shit you not), reads: DANGEROUS SUBSTANCE (in true Looney Tunes fashion). The walkers in this area are visibly affected by the substance, as their skin is oozing and bubbling, which is a true testament to just how amazing the makeup department is on this show.

Ezekiel offers to stay behind in a stand against the walkers, but Jerry pleads him not to waste his life here, imploring,”YOU ARE MY KING!” “NO I’M NOT, I’M NOT YOUR MAJESTY, LOOK WHAT’S IN FRONT OF US,” Ezekiel yells, pointing at the approaching mass of undead approaching them. “GO, GO! I AIN’T NO KING, I AIN’T NOTHING, I’M JUST SOME GUY!” 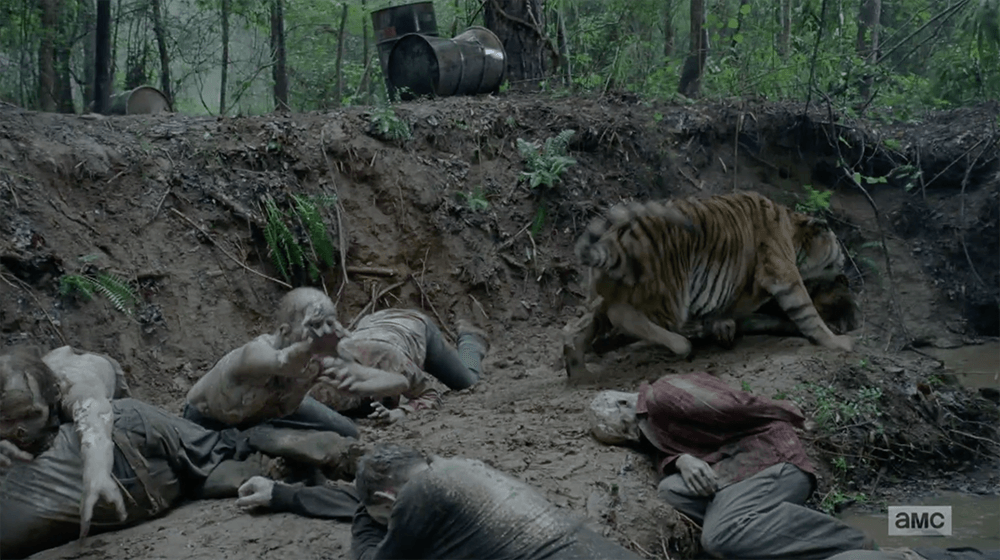 Ezekiel continues, but before he can finish his statement, Shiva rushes in violently slashing and gnawing at the walkers. This allows Carol and Jerry to pull him to safety, but not before she is overtaken by walkers herself. One can’t help but think of the similarities between Shiva’s sacrifice and Ezekiel’s choice to be a hero back when he was a zookeeper. All this is even more painfully tragic as we hear Shiva’s howls of pain as she is ultimately consumed.

We cut to the hilltop as the front gates slowly open, revealing Carol, Jerry, and Zeke in truly somber fashion. Ezekiel walks past everyone, to be alone, the pain and sadness visible all over his face. 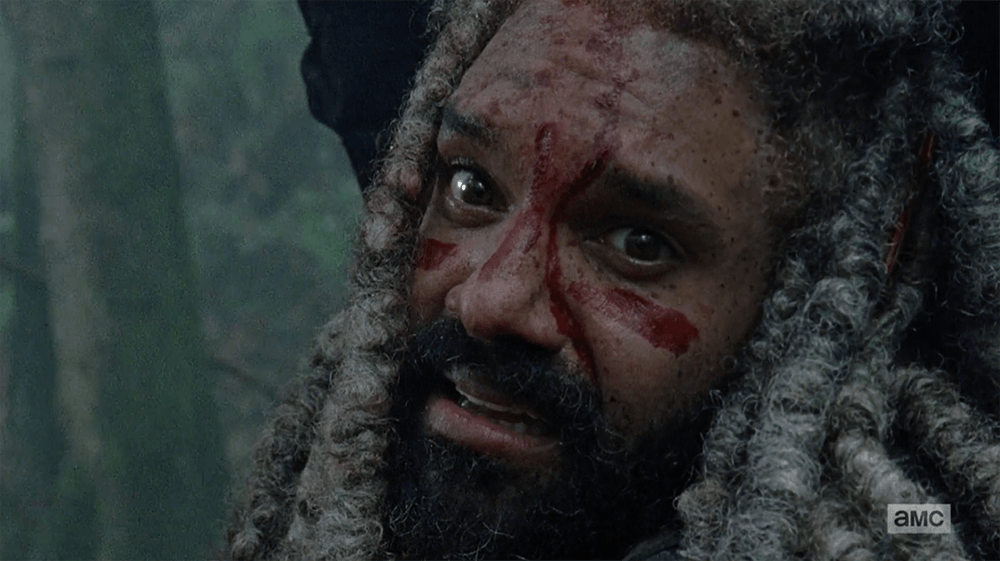 This episode reminds us that ‘The Walking Dead’ is at it’s best when it tells smaller stories…when it stands back and lets its characters soak in their pain. I am the first to admit that some of Ezekiel’s moments have been comically ham-fisted, but his performances throughout this episode were magnificent. Khary Payton’s depiction of Ezekiel’s moral decline was incredibly executed. There were moments where we can just look at him and know the feelings of personal uncertainty racing through his mind without him having to utter a word.

The action pieces this time around consisted of more than just “People shooting at the camera” that I have shown my dismay over on several occasions. We got more walkers in this episode alone then we’ve seen the whole season. But more importantly, they were treated as a bit more than the ever looming presence you just have to watch out for. They affected our characters, and as a result, elevated them to more than just an excuse to show violence. The design of the toxic walkers were some of my personal favorites since that of the armored walker we saw in the junkyard scene last season. 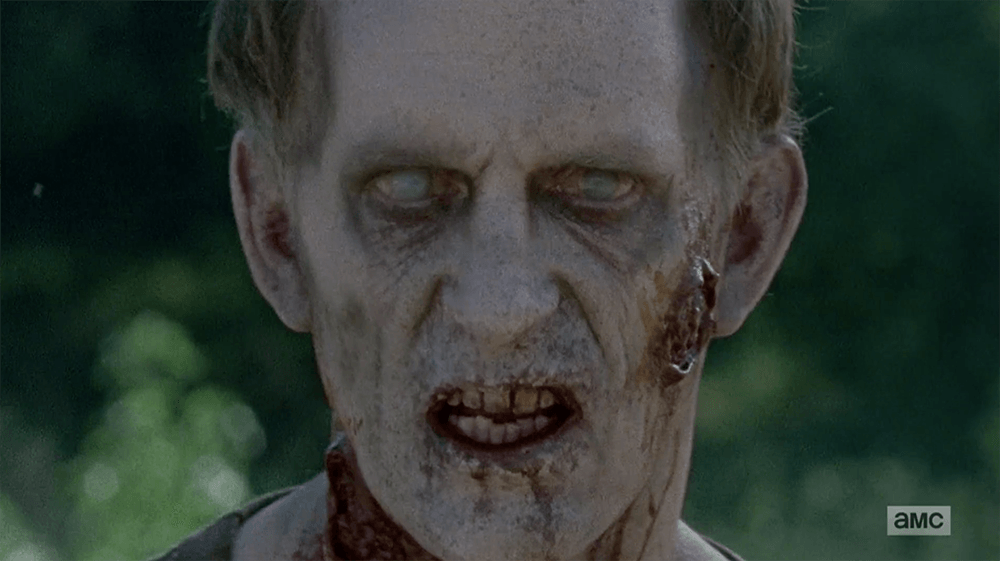 Bear Mcreary’s score was exceptional this time around. He showed us why he’s one of the best tv composers around by providing a pulse pounding, tension-filled soundtrack. The song that played during the chase sequence invoked some of John Carpenter’s best synth work, but felt fresh and unique. Sadly, still no sign of Negan…and what the hell happened to Gabriel? But at least it looks like we are back on the right track if we continue on the heels of this episode next week.

Looks like we’ll have to wait patiently until then!