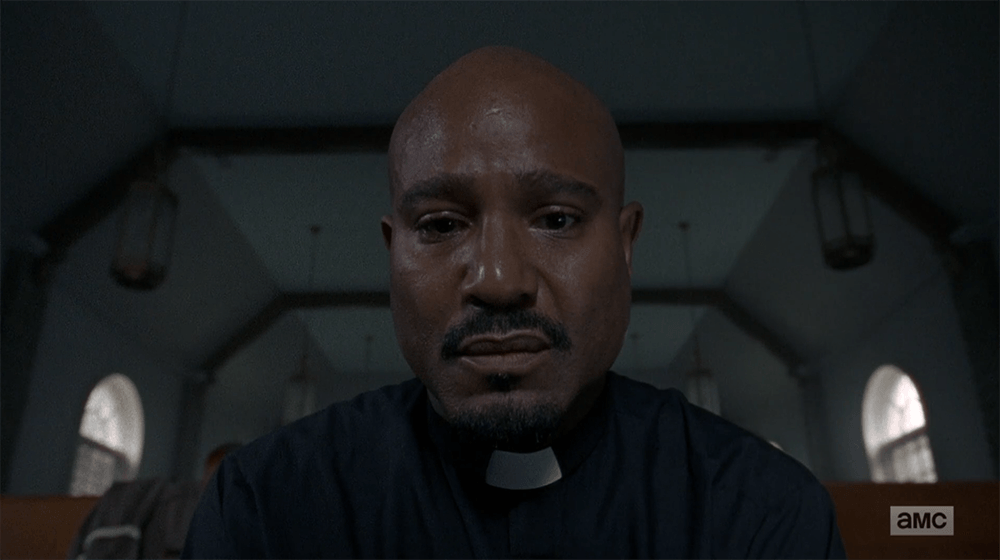 “I might die, I very likely will die. What I fear is a fruitless death, what I ask for is purpose.” These words lead us out of the darkness and into a flicker of Gabriel as he prays, quite literally for meaning, as have we concerning his arc, and we finally get it… mostly!

This week sees a savior-heavy episode. We begin with what can be described as the world’s worst job interview between Gregory and the undisputed head of human resources, Negan, along with his lieutenants: Dwight, Eugene, Regina, Simon, and Gavin. Gregory nervously tries to convince Negan that he can peacefully convince the people of the Hilltop that he can win them back over and thwart Rick’s rebellion. 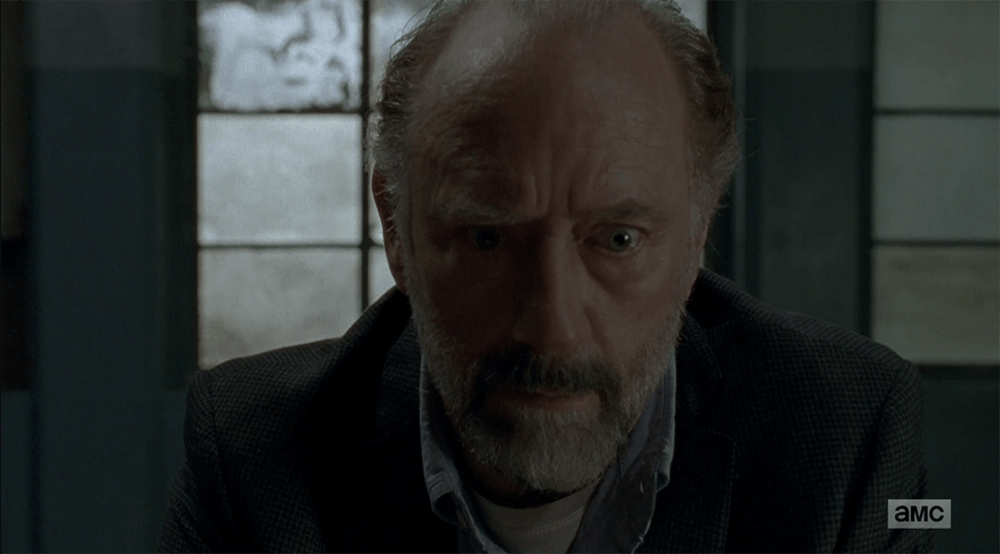 This goes about as well as a congressional hearing for a CEO of a bank caught with his hand firmly in the cookie jar — that is to say, painful to watch! Negan calls him out on his uncertainty and questions just how much clout he still has with his so called “followers”. He gets a pep talk from Simon, who at this point has as much as stake as Gregory, considering he is his liaison in everything that concerned the Hilltop.

Reassured, Gregory admits his mistake of letting a “fox into the hen house” and reaffirms to Negan that he will fix the Maggie problem. This infuriates Negan, and he angrily explains that people are the most valuable resource in this torrid world of theirs. As a result, “The Widow, Rick, and King Assface” need to be killed in a very public and intrusive way. 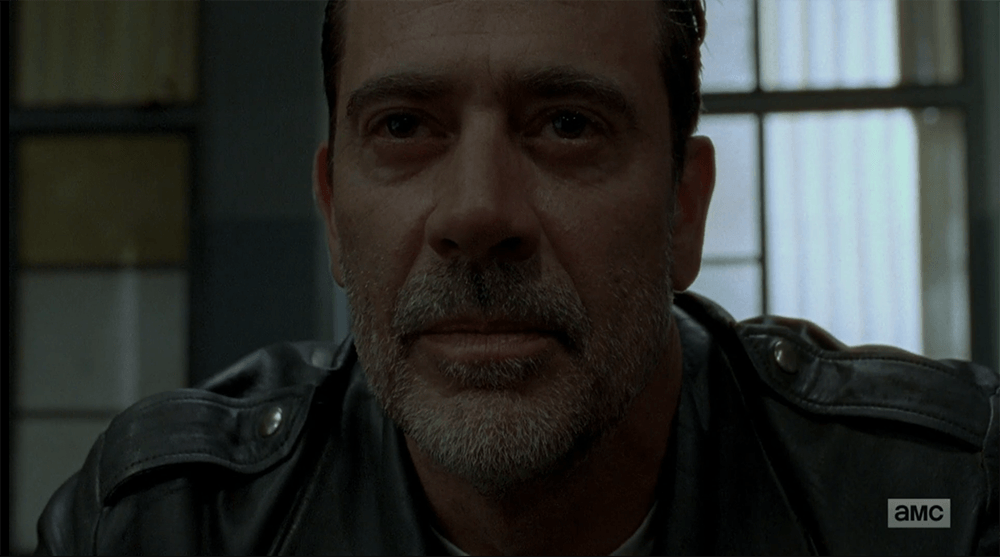 This sentiment is interrupted by gunshots heard in the distance, and we learn that this was the attack that occurred at the beginning of the season, when we last saw Negan.

Speaking of which…we cut right back to Negan and Gabriel’s “Shittin Pants” moment. He rushes Gabriel, forcing him to the ground and relinquishing him of his firearm. Negan does not obliterate his face, but surprisingly helps him up. Gabriel is also surprised as evident by his truly shocked expression. They sit and begin to converse about who the bigger asshole is between Rick and Negan. Negan defends actions for killing “The Widow’s husband and the Ginger” by proclaiming that Rick attacked first, thus starting this chain of events, and I can’t say he’s totally wrong about that! 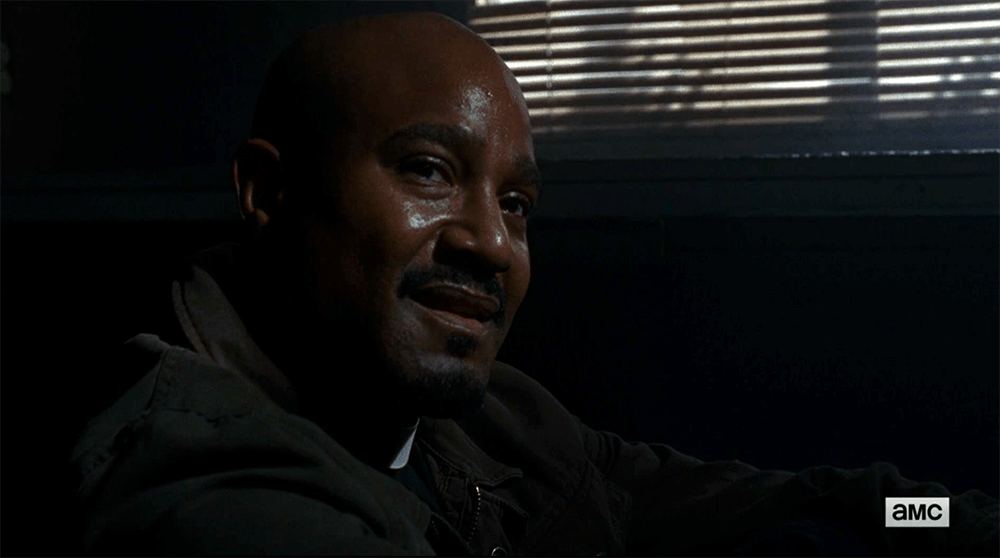 Gabriel slowly comes to the realization that his purpose for being in this trailer, surrounded by walkers that are salivating at the thought of eating their warm insides, is that he is there to hear Negan’s confession! How’s that for a twist? Negan laughs at the idea of a confession, but he does confess that he rubbed one out on the very same spot that Gabe is sitting in, reminding us of his odd obsession with all things Dick-related! He then asks Gabriel why he became a priest. “I love god, and I love people, and I want to bring them together,” he explains. Negan sympathizes with this, admitting that he, too, is doing all of this because of his love for helping people.

We’re taken back to the lieutenants who are faced with the possibility of Negan’s demise as they scramble to fix their dilemma. Regina suggests that they use some of the workers as a distraction so that a larger chunk of saviors can reach safety. Eugene quickly dispels this idea and informs them that it will just be a bloodbath and cause dissent among the people, to which Dwight agrees. 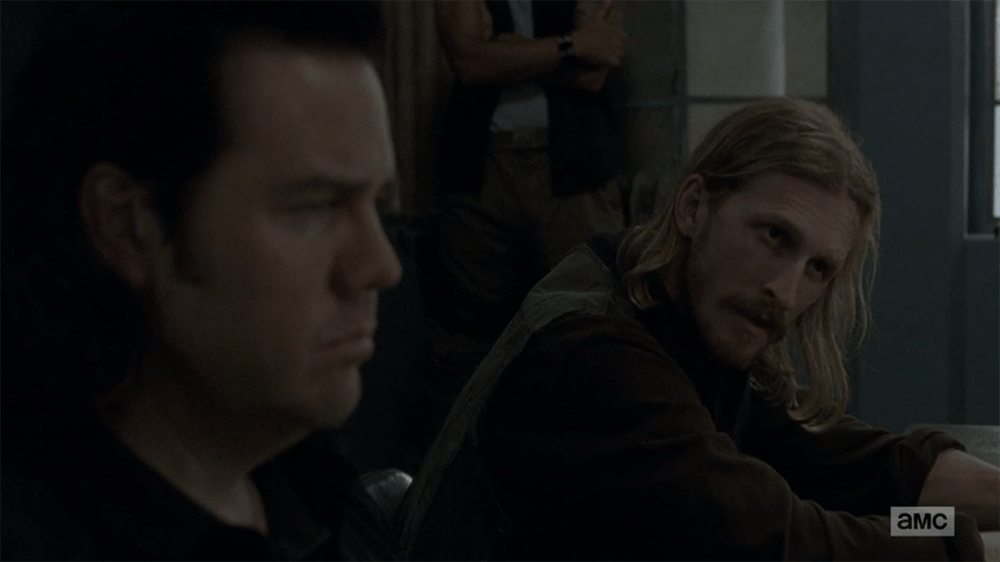 Gavin brings up the fact that there’s a rat among them, which should be their primary concern. Simon diffuses the situation in truly creepy fashion. Meeting adjourned! Eugene and Dwight meet separately, revealing that we have not one, but TWO rats on this ship, each with a very real fear of being exposed.

Back at confession, Negan explains to Gabe (and us) that he worked with children prior to all of this, “preventing them from becoming little assholes and turning into great big assholes.” He goes on a megalomaniacal tirade about how he turned the saviors from a group of weak individuals into the reviled group they are now, even going so far as to offer Gabriel his services. Gabriel changes the subject and pleads with him to expose  his weakness in order to be absolved. 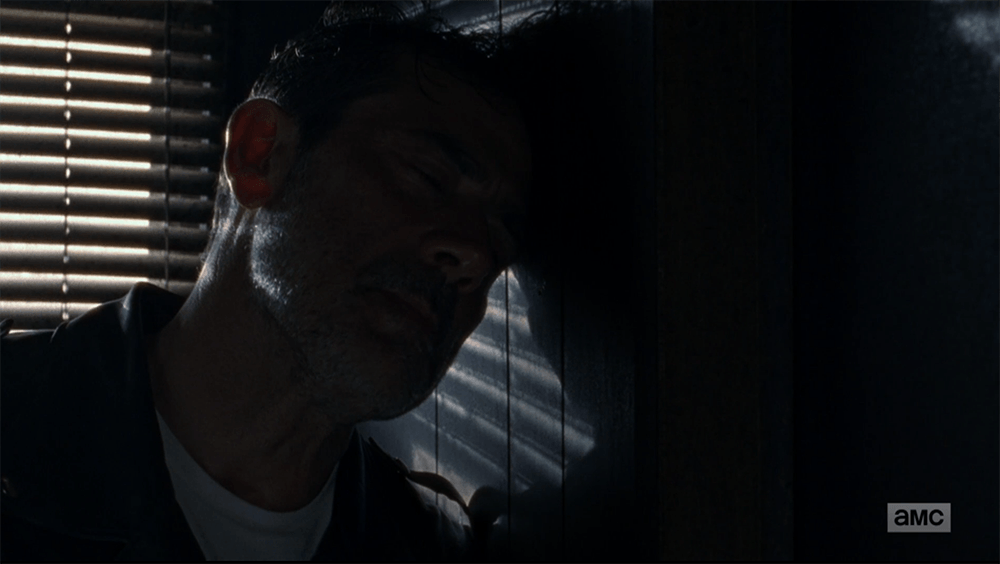 He goes on to expose what he feels are Negan’s weaknesses: his exploitation of the workers, his penchant towards violence, and the fact that he takes a number of wives against their will. He goes so far as to ask him if there was ever one wife before all of these. This exposes a crack in Negan’s armor, one that Gabriel exploits by grabbing for the gun stolen from him and successfully locking himself in a separate room.

We are taken back to where we left Rick and Daryl, surveying their newly acquired weapons, when Daryl sees a bag full of dynamite. He proposes that they use it to blow open an entrance to the compound, letting in even more walkers. “We could win this war today,” he proclaims. Rick explains the error in his idea, expressing that innocents will be killed, resulting in many more taking arms against them. Not to mention that Daryl is basically proposing terrorism. 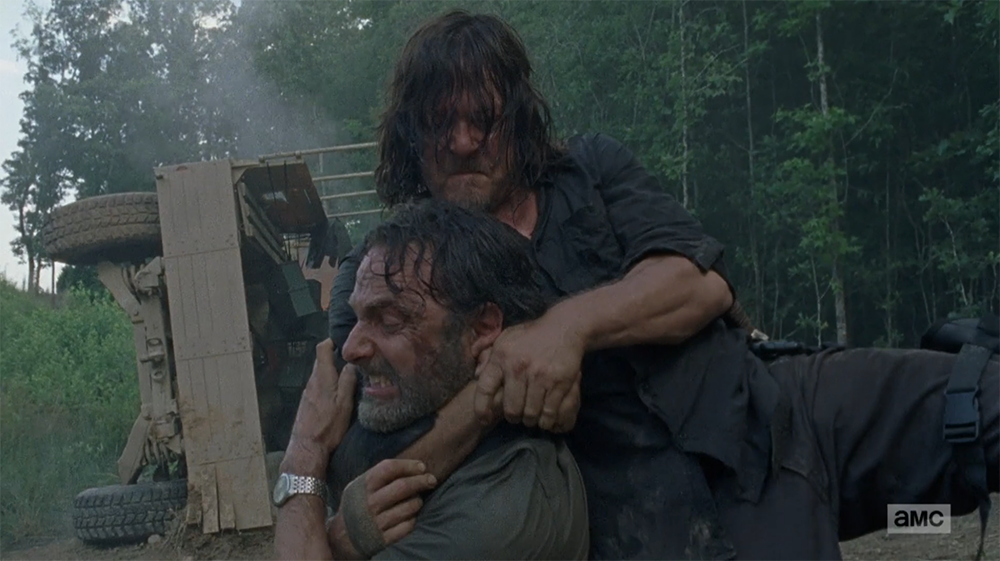 They argue further, which results in a fist fight. They tussle, and Rick throws the bag of dynamite onto the weapons truck. It of course blows up. They stop fighting and decide to split up to complete the final preparations of their plans.

Gabriel and Negan continue their conversation, now through a door, truly making it a makeshift confession booth. Gabriel starts by admitting his cowardice in locking his congregation out, resulting in their demise. Negan finally opens up about Lucille, his first wife — and how he lied, slept around and was basically an overall shitty husband. He admits that she was diagnosed with terminal illness, further explaining that when the time came, he was too weak to put her down. THAT’S his weakness.

Gabriel opens the door, fulfilling his promise, and offers to return the gun to Negan, telling him that he is finally absolved. Negan responds with a swift punch to the face. They decide that their only means of escape is using a nearby walker’s guts to mask their scent in the hopes of making it back into the compound. 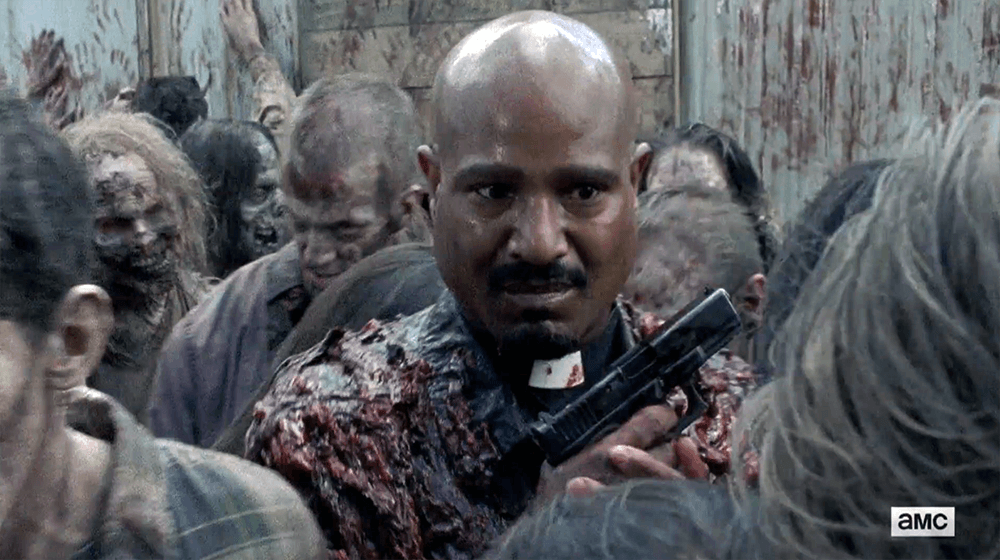 We are once again taken back to the lieutenants, as they are facing a group of very pissed off workers complaining about their lack of power and overall crappy quality of life. Simon tries to quell their concerns, but things escalate beyond their control. Regina shoots one of the workers, and they’re facing a bonafide riot when a faint whistle is heard. NEGAN RETURNS!

You could almost hear a collective sigh of relief as everyone kneels (Gabriel included) to their returned savior. Negan lightheartedly addresses them and goes on to explain that they will deliberate about the recent events, promising them they will be back to the status quo. His lieutenants debrief him on the events that transpired.. and with that we’re back up to speed! 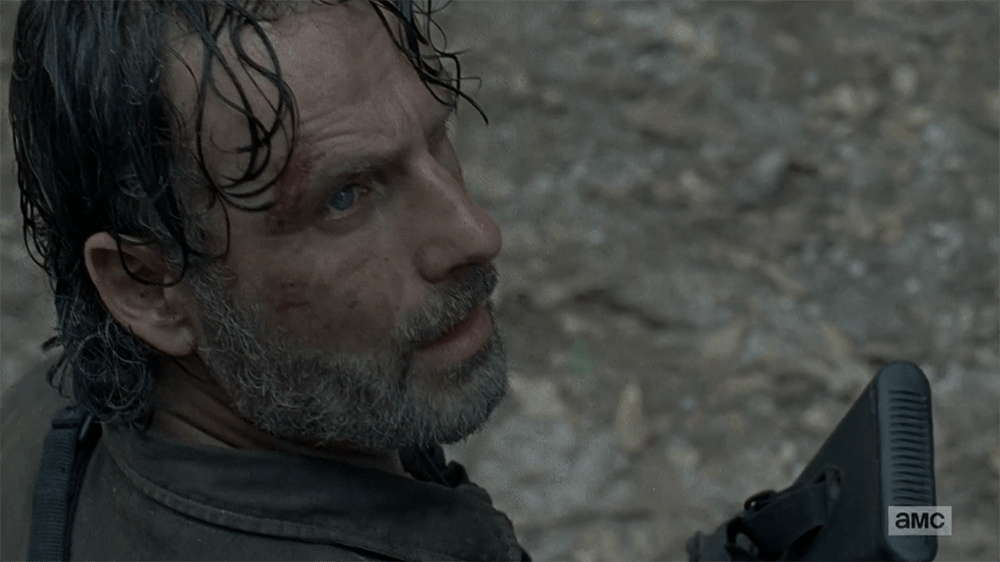 We then see Rick making his long trek to Alexandria when he sees a helicopter fly overhead. This would normally be a good  sign, but the look on his face says otherwise. At the compound, Eugene comically tries to speak to Gabriel when he notices that he is sick as a dog, with an apparent fever, muttering seemingly random words. We do manage to hear him say, “We have to get them out of here” before the credits roll!

This is the episode we’ve been wanting!

The shift of focus from our core characters to the saviors is the breath of fresh that we’ve been needing! What a relief to finally have the time to flesh out Negan’s character and, as a result, the savior’s side of all of this. The idea of doing so in the form of a confessional worked resoundingly well for both Negan as a villain, and Gabe as a character seeking desperately for redemption.

Steven Ogg’s performance as Simon continues to keep me laughing among all this uncertainty! He has a certain way of being insanely creepy, awkward, assertive, and just damned likable. Although, I may be a bit biased, as I sincerely loved him on Westworld, and his performance on Grand Theft Auto is truly astounding for those very same reasons. 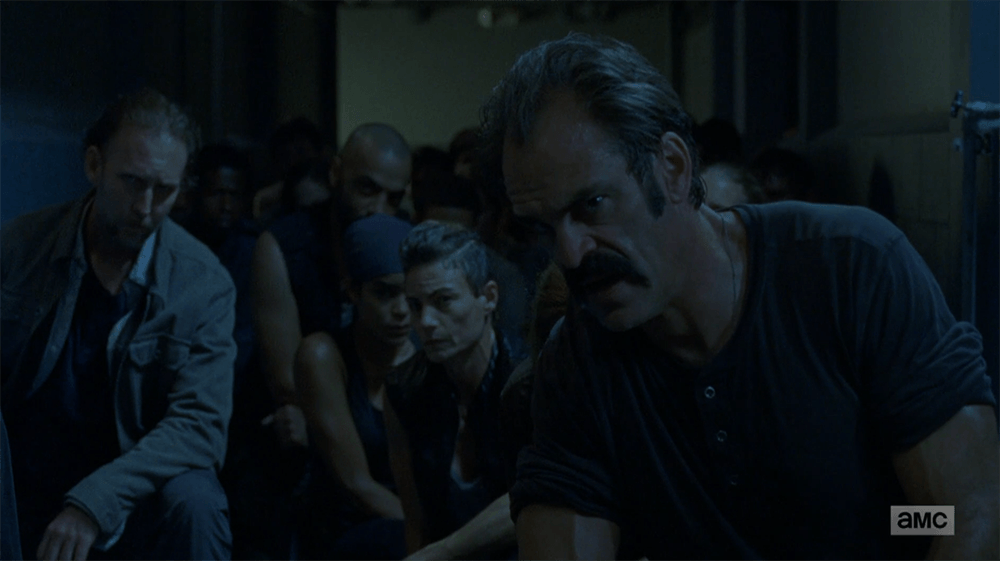 My only major gripe with this episode is basically Rick and Daryl’s involvement in pretty much all of it. Their “fight” was a total waste of time, even more so than the Jesus and Morgan debacle. It just feels like utterly lazy writing to have this whole arc concerning the weapons truck and the chase, just to blow it all up, not a single fuck given. The helicopter scene was a pleasant surprise and brings a small sense of wonder to an otherwise predictable season, and I really can’t wait to see what they do with it.

Here’s to hoping they don’t just blow it up!