Talking “The Song of Solomon” with Stephen Biro

An exclusive chat with filmmaker and President of Unearthed Films, Stephen Biro, following an advance screening of The Song of Solomon 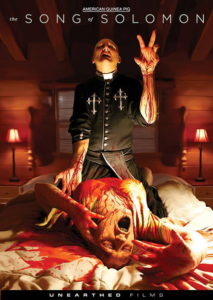 My interest in The Song Of Solomon was more than piqued when I first saw the initial trailer released for the film. I sat and watched it, mouth agape and slightly drooling over the prospect of something very special — and very gory — coming our way.  The trailers were devilishly well constructed and intriguing, promising a film full of what hard core horror fans adore…blood, evil, and gore.

Maybe this is one reason why Stephen Biro far surpassed the goal for the crowdfunding campaign on Indiegogo for his latest feature, smashing the needed amount and acquiring almost $53,000 instead, while also offering some unreal perks and bonuses (rare shirts, movie props, DVDs, Blu Rays, posters, etc.)  for fans.

Unearthed Films, the company founded by Biro, has definitely evolved over the past 15 years. The progression has allowed horror fans a front row seat to some of the goriest, most grotesque, and challenging viewing spectacles in genre filmmaking. From the first film produced back in 2008, a documentary entitled Philosophy Of A Knife, to now, Unearthed Films has, in my opinion, become the last line of defense for hardcore horror fans — giving us the opportunity to watch some seriously questionable shit, that many dare not trifle with.

I mention this to Stephen as we chat, and a wide smile appears on his face followed by laughter and an affirmative nodding of the head. He seems to relish this fact and wants to aggressively continue building upon this foundation that was set out for the unique, independent distribution company. 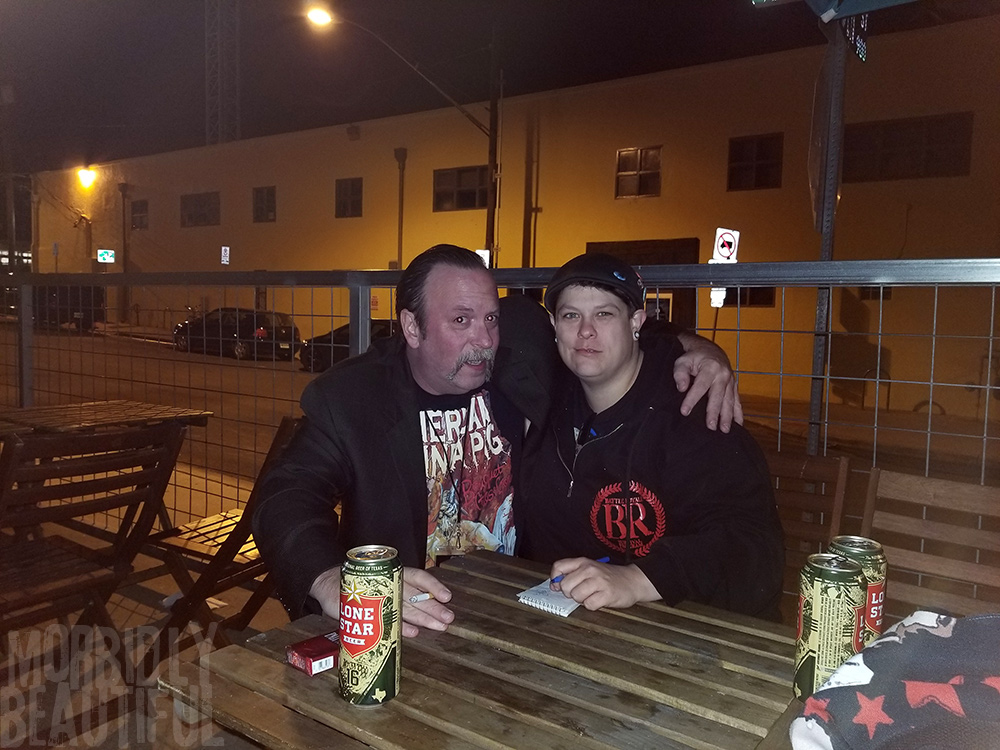 Hanging out with Stephen Biro

I believe he did just this with The Song of Solomon.

You may say, “Oh, this is just a ripoff of The Exorcist.”  But I will retort, “No fucking way.”  Not after watching The Song of Solomon.  See, here’s the deal folks, not every filmmaker will go out of their way to make a production so near accurate.  Stephen went as far as to reaching out to the Vatican, and surprisingly they answered.  Assuming he was a Priest, they answered the request of ‘Father Biro’ and granted him access to a much valued volume within the Catholic Church’s library, focusing on the age-old and ridiculed rites of Exorcism.

The red-leather bound, 84 page book entitled De Exorcismis Et Supplicationibus Quibusdam ( Of Exorcisms and Certain Supplications ) became a template for The Song of Solomon, allowing authenticity and Holy structure to his story of possession. 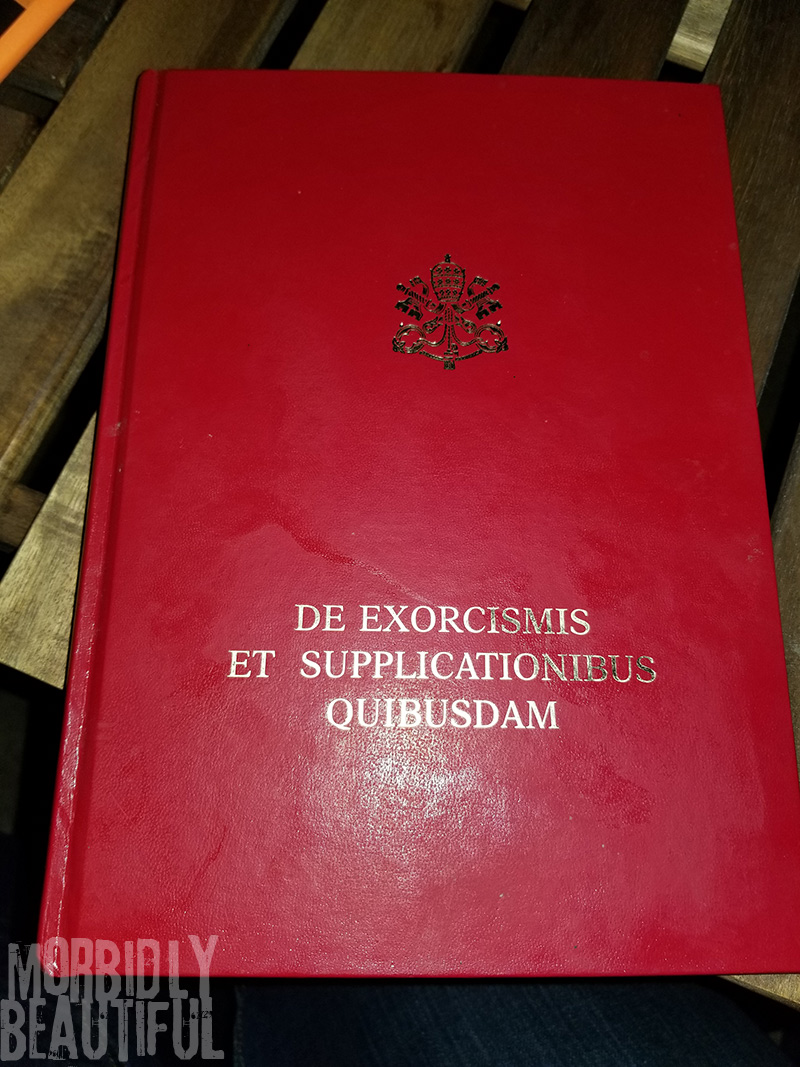 This Catholic Church document, which is all in Latin, supposedly contains the Rite of Exorcism authorized for use within the Church and it’s Clergy.  Biro let me look at it, and flip through the pages as he pointed out it was numbered, with only 200 copies in existence as well as signed by the Pope himself.  I honestly couldn’t believe I was holding such a Holy relic in my hands — without sweating, feeling uncomfortable, or even bursting into flames.

The North American premiere for The Song of Solomon was during Austin, Texas’ Death By Festival being held at The North Door on October 28th, in hopes of helping raise funds for those affected by Hurricane Harvey. Biro, also helping personally with this fundraising effort, offered to send out various titles from the Unearthed Films catalog if people donated $10 or more to the Hurricane Harvey Relief Fund. 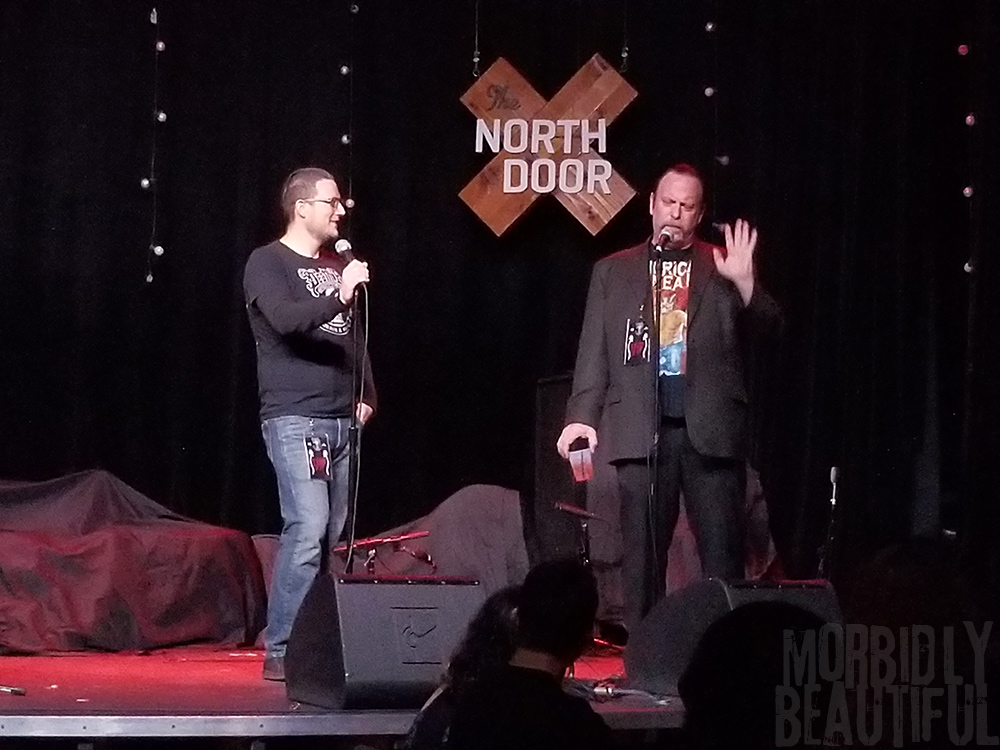 A great cause with a  great line up of films (Through the Wide Gate, 10/31/16, Coffin Joe: Heart of Darkness) and bands (Goatcraft, Deadhorse) rounded out the schedule for Death by Festival, but many eyes were focusing on the Saturday night screening of Solomon with great anticipation.

Waiting outside the venue before the premiere, I met two other individuals who traveled several hundred miles to view the film. One gentleman was from Dallas, the other Baton Rouge, and we briefly spoke of our shared interest in Biro’s flick as we finished our smokes and headed in to find a seat.

The North Door’s area for viewing the films on it’s bill was pretty full when Director Stephen Biro climbed up the steps to conduct an intro to The Song of Solomon. In great spirits, with one in hand as well, he thanked the crowd for attending, spoke briefly about the World Premiere in Sitges, gave appreciation to the Festival organizers for including his film, and asked us all to “pay attention to the dialogue.” 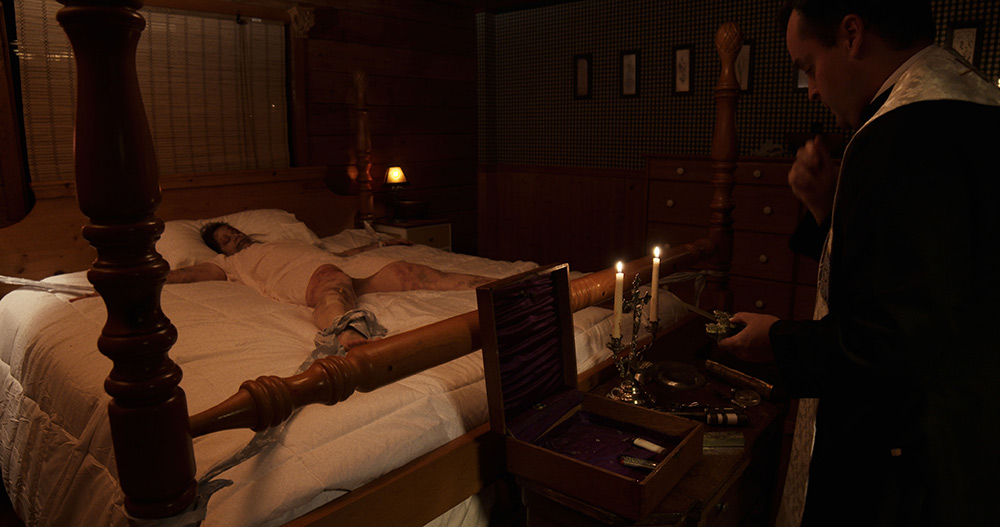 This made my ears perk up a bit, because when I first saw the poster art for The Song of Solomon, meticulously created by Kung Fu Bob O’Brien, I immediately saw loads of potential unspoken clues to the movie. It’s striking, symbolic, and kind of burns into your memory, leading me to believe this would be a layered journey. Personally, the first thing I noted, was the Priest (Gene Palubicki) presenting himself in a Baphomet-like pose.

I relay this observation of mine to the filmmaker, and he just smiles, then proceeds to show me other details within the gorgeous poster art directly pertaining to his story of Ancient Evil. Biro emphasizes heavily to pay attention to detail and exchanges made during Solomon, and it’s hard NOT to. By the opening scene, you are thrust right into the middle of something heavy, with a father (played by none other than Biro himself) giving an intense, ranting plea to his daughter Mary (Jessica Cameron, who simply outdoes herself in this role) followed by a particularly vicious self-demise committed right in front of her. 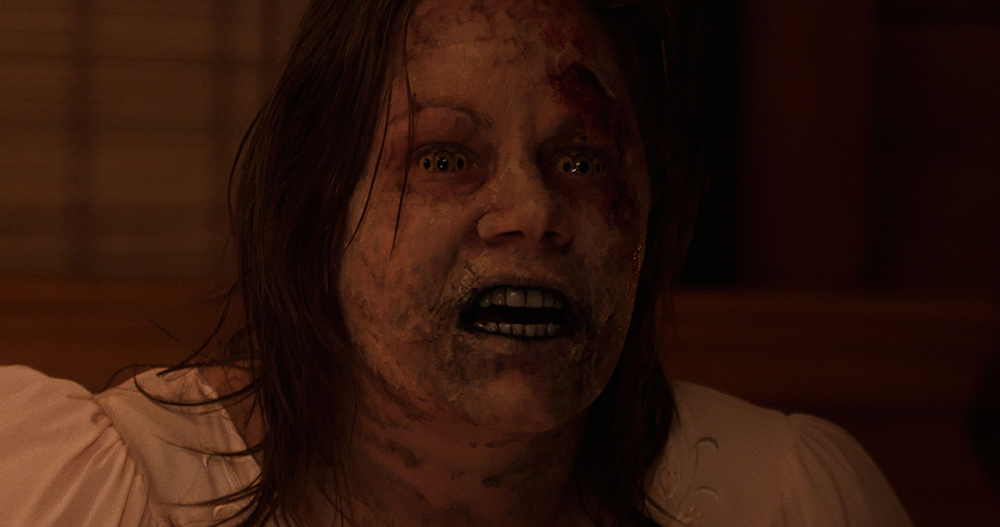 The audience begins to clap, approving of this opening, myself and companion included.  Stephen is seated several feet to my right during the screening, but I can see his face, and he is pleased with the audiences reception to this opening scene.

What the filmmaker aimed to do was “show the unknowns of Exorcisms” with a heavy attention to detail and actual religious customs, including Latin dialogue and clothing for the Clergy. This was all, of course, in conjunction with bursts of glorious practical gore committed to the screen by the teams of Oddtopsy FX and Toetag SFX.

Biro was happy to mention that Cameron, was his “shining star”. 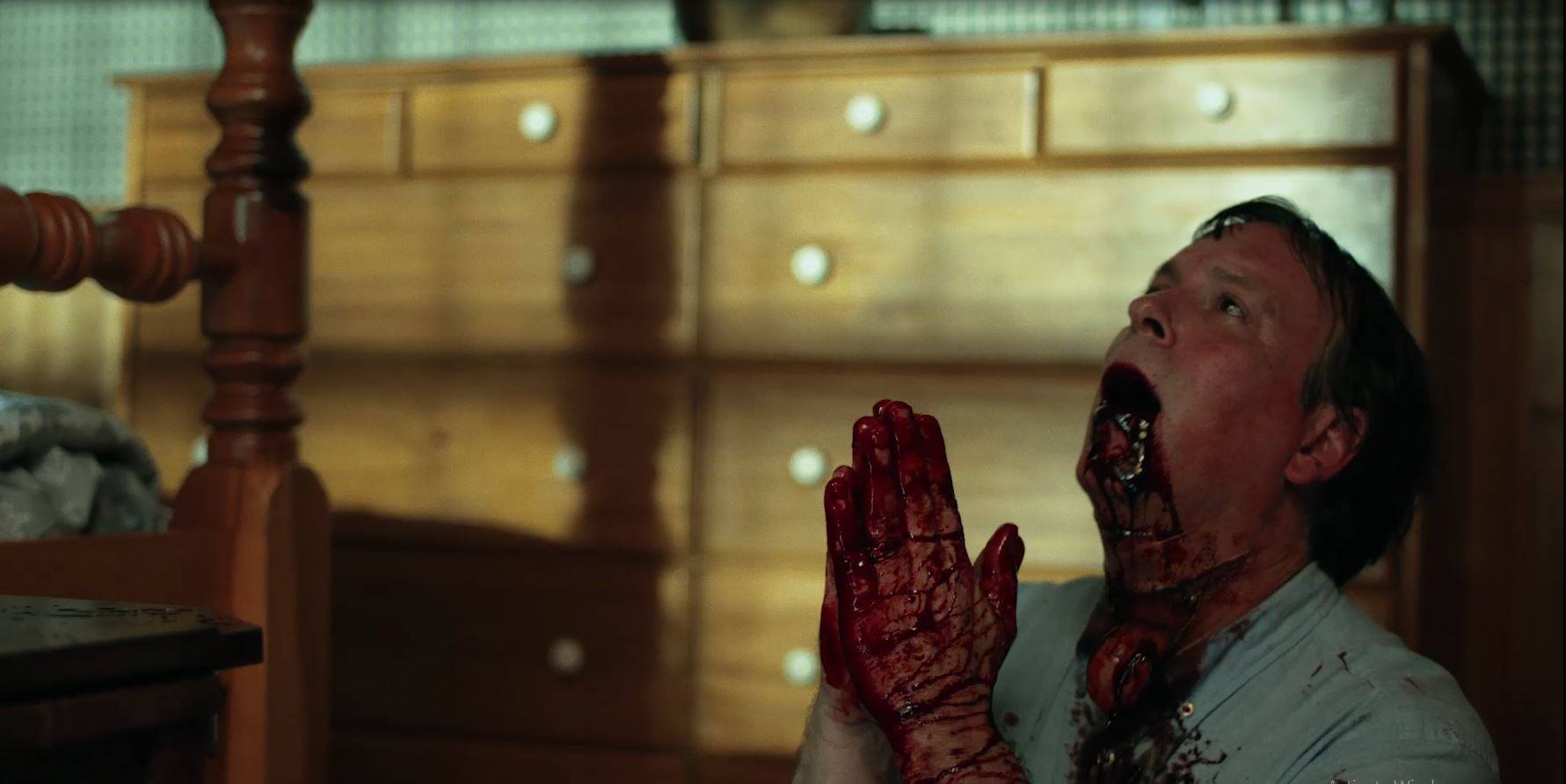 According to him, she nailed all her Latin and offered to help co stars on their foreign dialogue, not to mention staying late on set to help clean up blood for countless hours. Her dedication to the production was valued and unprecedented in ways, making the enjoyment of her performance even more satisfying.

Alongside the authenticity of ‘The Book” ( Of Exorcisms and Certain Supplications ) were the wardrobes for the members of the Church. Stephen stated that each Priest’s outfit was ordered directly from the same source as the Catholic Church.

The Song of Solomon continues after it’s bloody opening with a counselor, speaking with the seemingly mild mannered Mary after some bizarre behaviors  are exhibited and concerns arise from her mother. This interaction between the two quickly turns ominous, with the Evil within the young woman making its presence known.  The Church gets wind of the issues surrounding Mary and prepares itself for what has to be done.