And yet I smile… 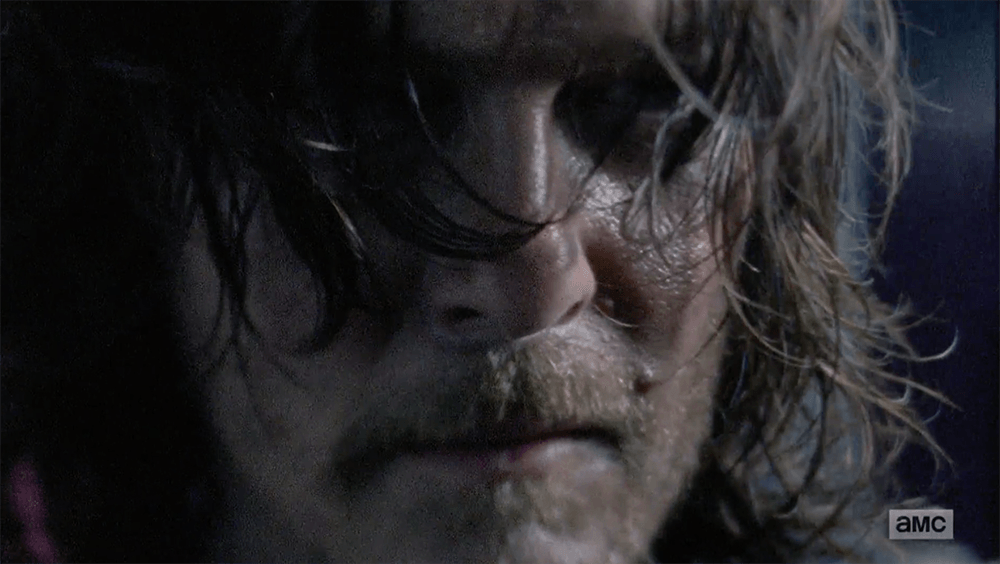 We’re back! Last week saw the opening of this bloody campaign being fought in multiple parts, and this week utilizes a very similar setup. We begin with some shots of our intrepid morally gray heroes’ faces… just staring blankly at… things. Back at Negan’s compound, his people prepare their guns for battle, while a leather-clad, admittedly badass looking woman named Marie (or Maurie, not sure of the spelling) oversees the preparations.

She scolds a man for his sloppy gunsmithing, while simultaneously asserting her role as what seems to be Negan’s head of security, or at the very least one of his generals. She may not be doing the best at her job, because a fleet of familiar looking armored vehicles carrying a handful of our heroes swarm in like wraiths —  unleashing hell in the form of hellfire at the opposition. 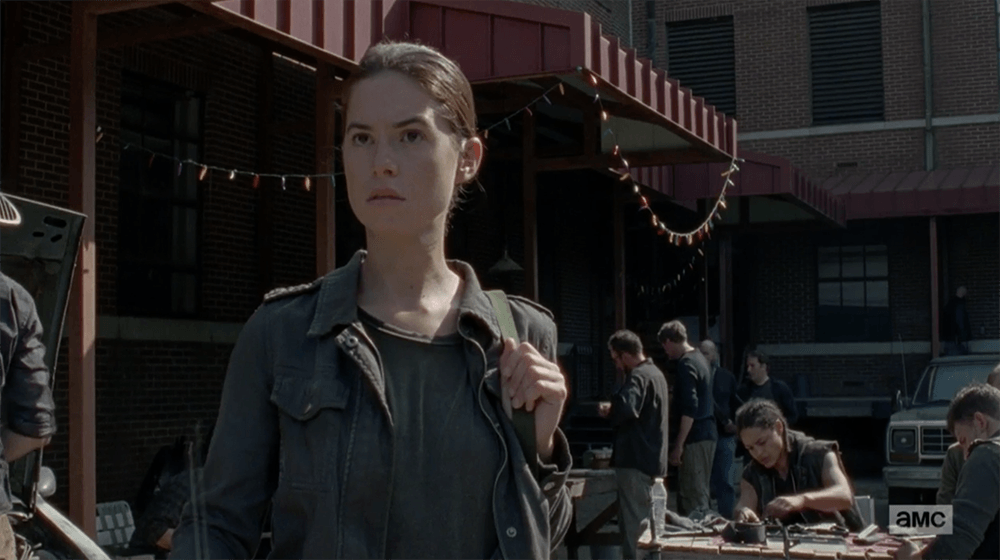 We then cut to Carol, Ezekiel and All the King’s Men in a heated battle with walkers. They handle it of course, as walkers at this point are made out of cardboard. Zeke then reveals that they are giving chase to a splinter group of Negan’s men on their way to warn him of Carol’s group. Meanwhile, back at the compound the battle of the red coats is still in full swing.

I feel like I can’t bring myself to really care about these guys.

It feels like they got a bunch of extras together and told them to just fire at each other to kill time. We follow Rick and Daryl creeping into what looks like a residential area, then quickly cut to Morgan, Tara, Jesus, and a group of people planning a clandestine attack on the Satellite station we saw a few seasons back. Jesus and his technicolor dream team do their very best SEAL team six impression and make short work out of many Saviors with deadly precision. 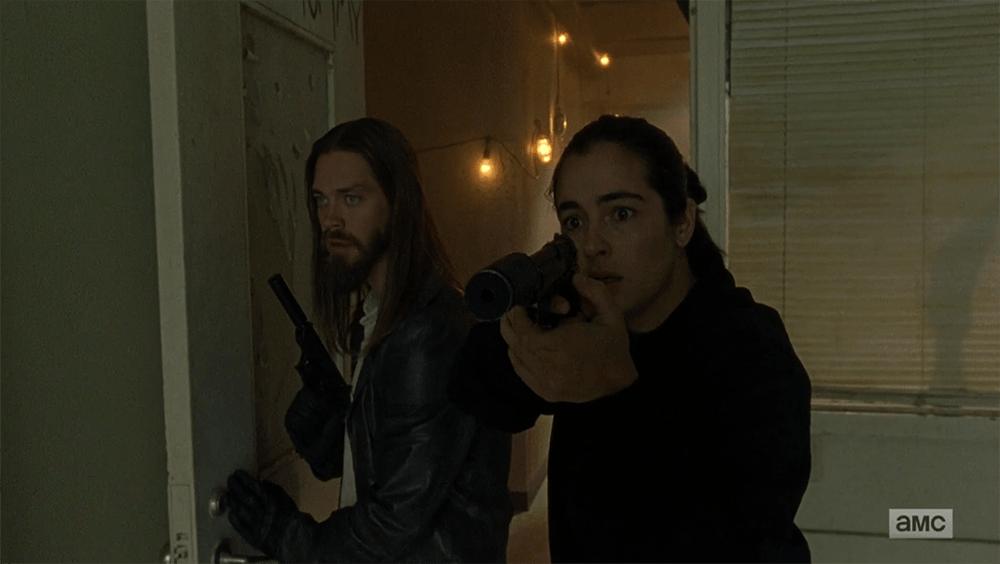 Morgan, accompanied by two others, prepares to reach a room occupied by some saviors. His two followers are clearly green in the ways of war, as evident by their look of nervousness and their weapons literally shaking to portray that fear. They are obliterated, clearly outnumbered by the Saviors’ numbers. We see the three laying in a pool of blood. CUT TO COMMERCIALS!

Jesus and Tara find a man cowering in a food closet, and he promptly pisses himself. What to do with this guy? They think to themselves, as showcased by a short good cop/bad cop routine. Jesus wants to leave him alive, and just like that, Piss Pants grabs Jesus and holds a gun to his head, but not without confessing just how hard it is to urinate on yourself on command; “It’s like your dick knows it’s wearing pants.” So wise. More words are exchanged, and Jesus shows us his fancy moves as he judo flips the piss out of our moistly pantalooned villain. He then ties him up, much to Tara’s dismay. Come on Tara, he IS Jesus…he forgives! 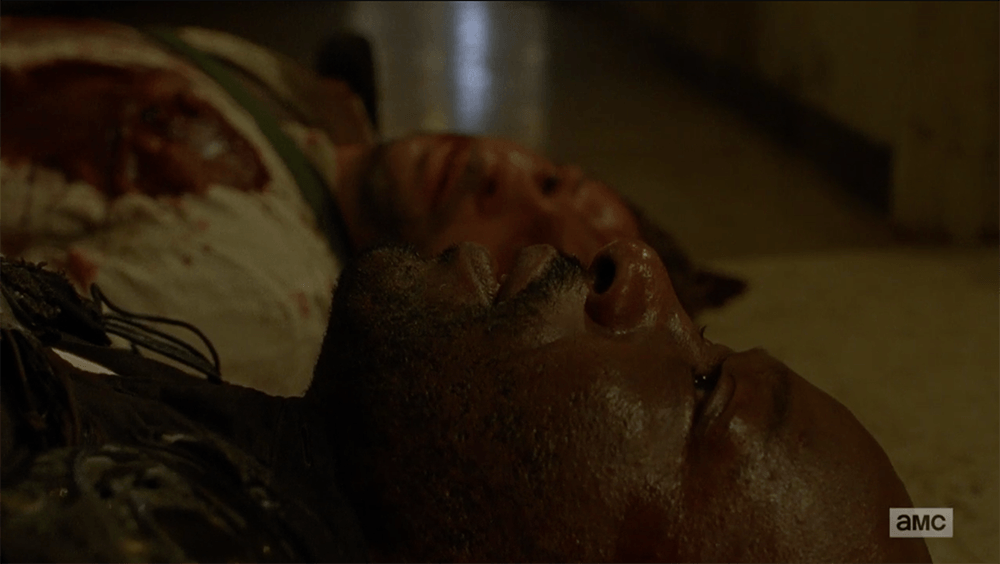 Back to the Sattelite Station staring down at three dead bodies, with Morgan among them. In a twist surprising no one, we see he’s alive — alive and PISSED, as showcased by his “reloading my guns and walking away from the camera because I’m about to fuck shit up” thing. Team red coat is still suppressing fire when Marie sees that her fallen mates start to rise. She comes to the startling realization that this was basically an incredibly fucked up, but brilliantly concocted diversion. Then she gets her face eaten. RIP Marie, we barely knew you, but you were pretty alright.

We are reintroduced to Carol, Zeke and his men continuing chase in the forest. Zeke confesses to Carol that he’s “faking it till he makes it,” solidifying anyone’s worries that he may not exactly have a fucking clue as to the benefits of his actions as King. But it’s what his people need to be strong, and you can’t fault him for that. 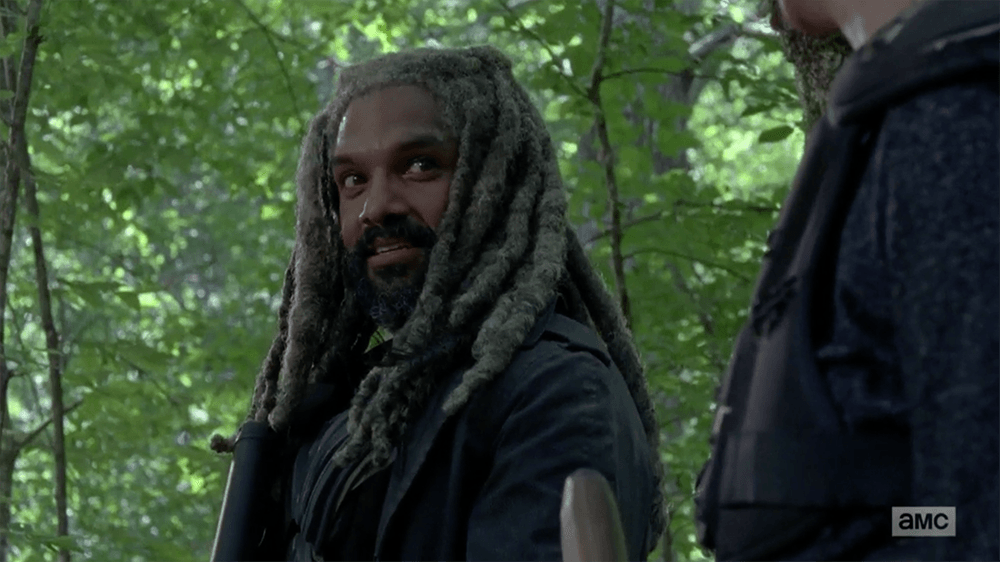 Rick is continuing his sneaking operation in an apartment comprised of shitty Ikea furniture, when he is attacked by an unknown assailant. They struggle, and Rick Salsa swings him into a coat rack, impaling and instantly killing him. Morgan John Wicks the fuck out of everybody in a fit of Gun Fu that would make Jason Todd nod ambivalently. We then cut to Jesus and Tara preparing their team to take out the last remaining men at the station. They continue their argument as to taking prisoners, just as Morgan exits the mouth of darkness of the station interior — and into the figurative, and literal, light of the outside sun.

Back over in Rick’s neck of the woods, we see him staring down at his freshly deceased Salsa partner when he notices a tattoo on his chest that reads “Grace Be God.” He walks over his victim and into a what looks like a nursery, the baby blue on the walls contrasting the dark witnessed in the room prior. He notices the word “GRACIE” written lovingly on the wall next to a mirror, nestled over a baby’s crib, the baby peacefully laying awake inside of it…thus, bringing the point across Rick like the proverbial ton of bricks. 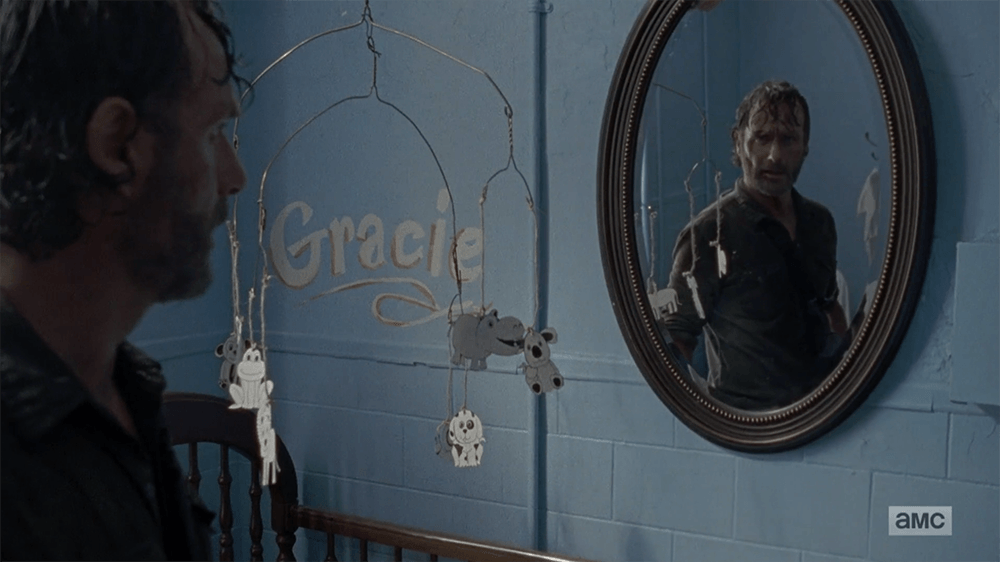 Andrew Lincoln does such a great job conveying the guttural dread, feeling the remorse over the senselessness act of taking this baby’s father from her. This is followed by the putrid and sincere look of disgust as he catches a glimpse of himself in the mirror. I can’t help but think of what soldiers go through after a kill. It was my absolute favorite moment of the show.

Whereas that should have been our closing moments to the episode, we are greeted by Zeke and team in the forest where we are reunited with everyone’s favorite CGI tiger, Shiva. She mauls the men they were after. We then see a solemn Rick looking over  his victim’s family photos, where he is greeted by a gun pointed at him by a man who gives him a stark look, as if he’s met him before. 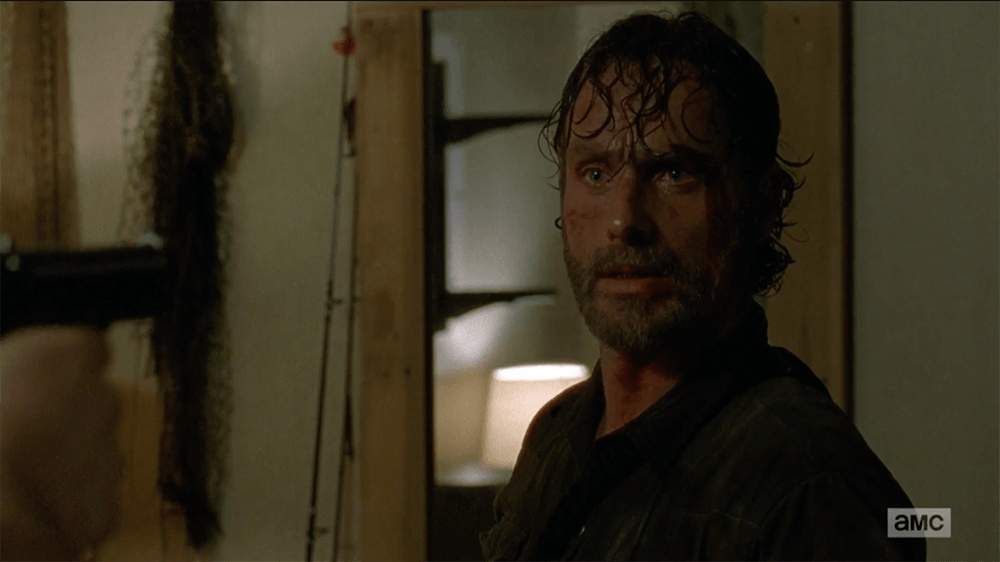 “Hi Rick,” says the man. Rick, sharing that same look of familiarity (as was I because I have no fucking recollection of who this guy is) says to him, “Your name… Is Morales. You were in Atlanta.” “That was a long time ago,” Morales angrily retorts. He then informs Rick that he has called the Saviors, and they are already en route for him. We are then shown a similar sequence where we see our intrepid morally gray heroes. But this time, we have a little more understanding of the events that have transpired in this short time.

This was an adequate episode. As I previously stated, it’s so damn hard to care for everyone for everyone but the core characters at this point. It genuinely feels like padding until we get to the story that everyone wants to see resolved. 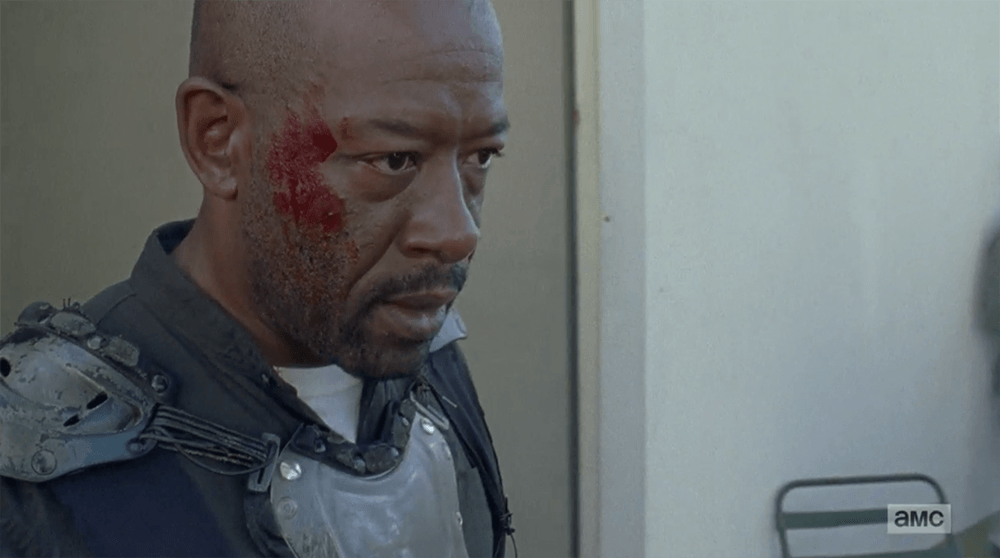 On the other hand, many things were done right, a beautiful shot of Morgan staring mere inches away at a group of walkers on the other side of a fence as they envelop the shot in darkness was a great omen for the events he endured this season. Andrew Lincoln’s acting (and accent) have never floored me before. But that nursery scene was flawlessly executed. I almost got PTSD while watching it. But again, those are only a few good moments in a otherwise underwhelming outing.

But, to quote Zeke, “AND YET I STILL SMILE”! 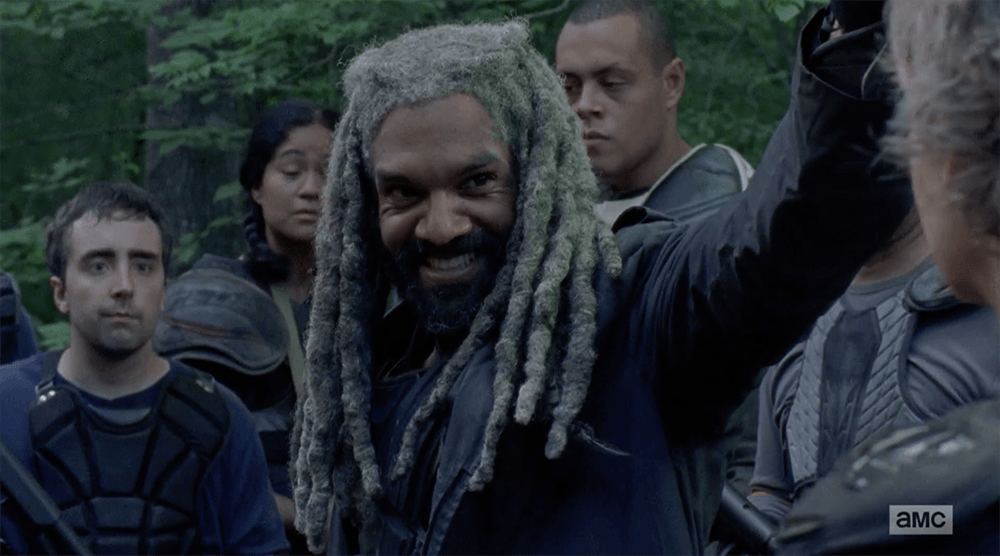