“Rats: Night of Terror” from the maestro of weird, Bruno Mattei, may not be an objectively great film, but it delivers plenty of wonderfully weird fun. 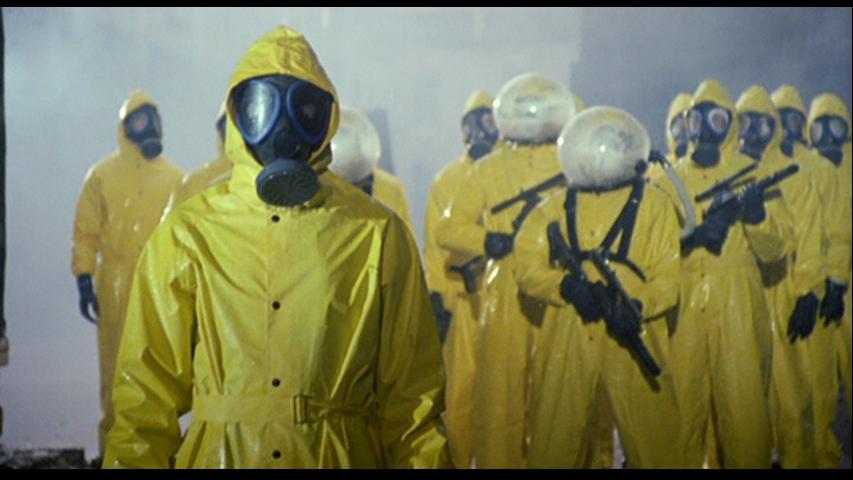 If Weird Wednesday had a hall of fame, Italian producer/director Bruno Mattei would surely be in it. There’s no shortage of material for this article when the decision is made to watch one of his movies. For this month’s pick, we’re looking at the 1984 post-apocalyptic creature feature, Rats: Night of Terror (aka Rats – Notte di terrore, aka Blood Kill).

The year is 2015, and hundreds of atomic bombs are dropped over the five continents. Some humans escaped the nuclear fallout by moving underground. A new period began called “After the Bomb,” the period of the second human race.

After living underground for nearly 100 years, several men grew dissatisfied, revolted, and returned to the Earth’s surface. This group of humans are thought of as primitives by the underground dwellers and considered to be a new, separate race. For a long time, the people underground and those who now lived topside had no contact.

Two communities have no contact for a long period. Underground people despise the people living above and consider them savages.

In the year 225 A.B. (After the Bomb), a gang of well-armed bikers arrive in an abandoned city looking for food and shelter. 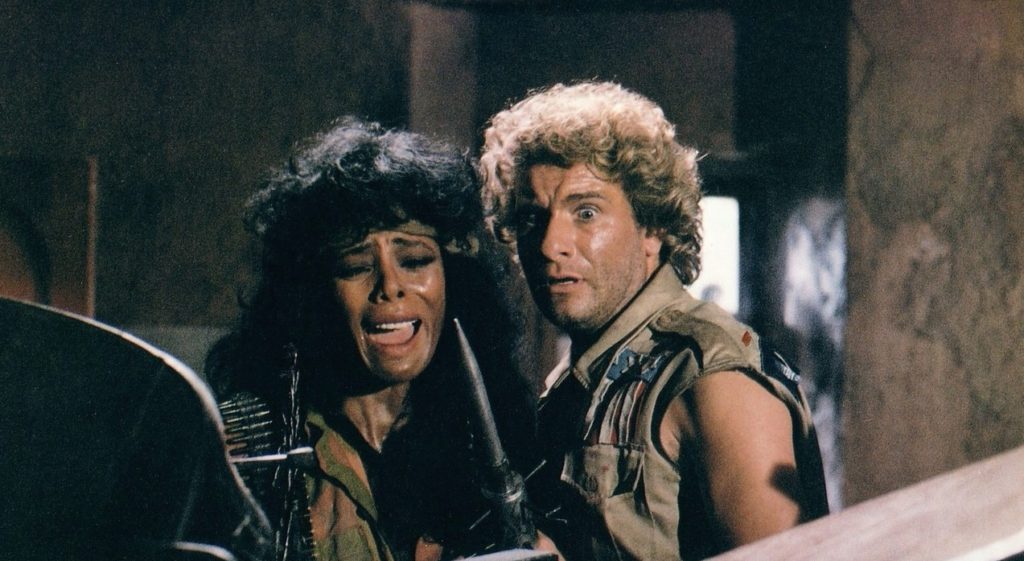 They enter an old hotel and find a room with boxes of dried goods such as sugar and flour. The gang celebrates their good fortune by dancing under a spray of sugar until they find corpses near the boxes. The corpses are food for large, red-eyed rats. Frightened, they look for another place to shelter in the hotel and find an underground laboratory with computers and pods with plants and fresh food growing.

After investigating, they find a room to sleep in, unaware that just outside, the rats are gathering in large numbers and are ready to feast on the human flesh inside. These rats were driven to the surface when humans moved underground. The exposure to the radiation has mutated the rats, increasing their intelligence, and making them seek out one food source — human beings.

Rats: Night of Terror is one of the least shocking films in Mattei’s career. The story is fairly straightforward, and while there is some impressive gore and corpse FX, it’s at a minimum compared to other films in Mattei’s filmography.

What Rats is filled with is painfully bad dialogue, some over-the-top ADR performances, lots of screaming, and less than enthusiastic rats.

But fans don’t go into these movies expecting Oscar-worthy acting or coherent storylines. 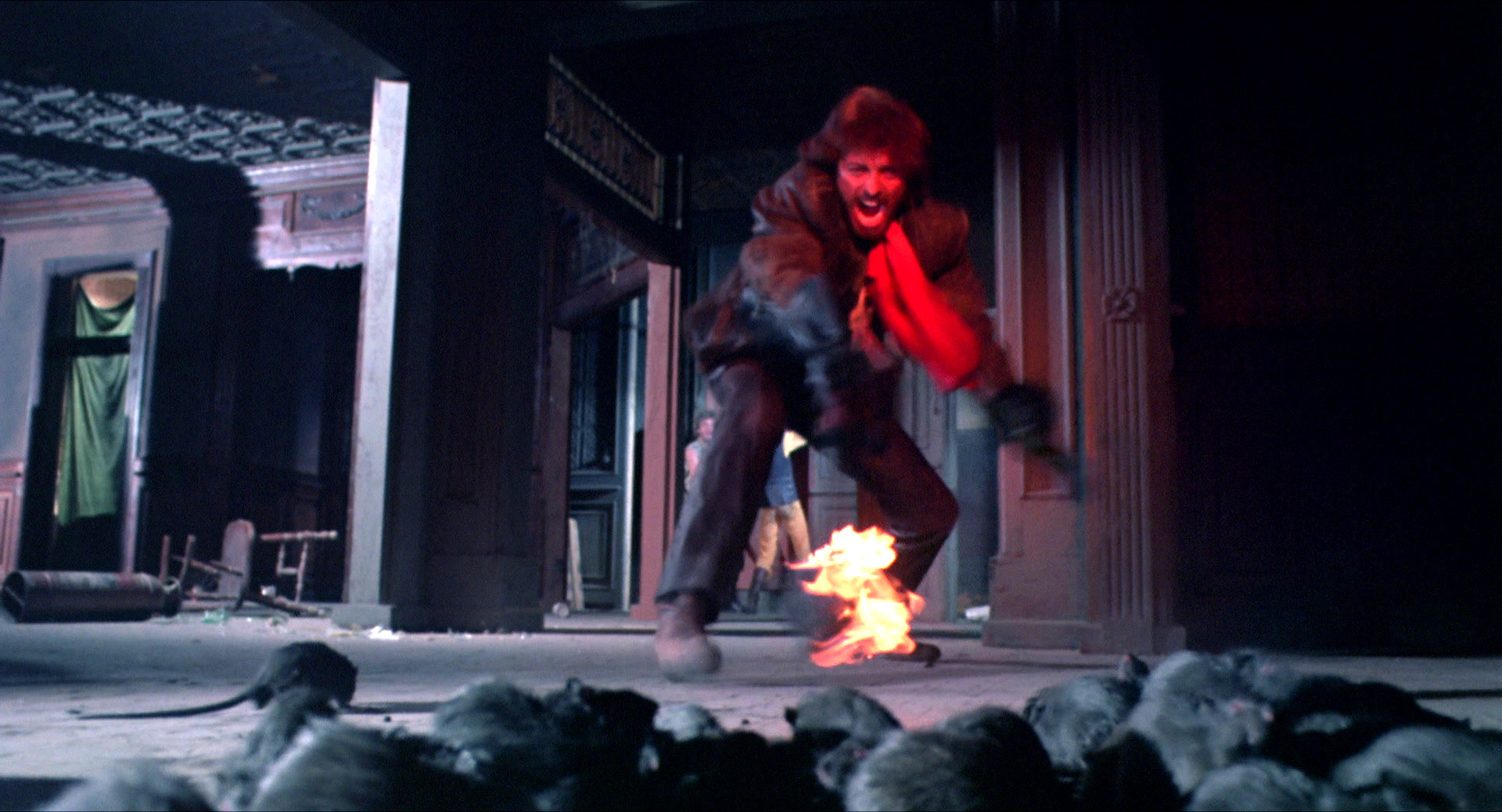 Fans, including myself, are expecting to be entertained for 90 minutes, and Mattei’s films, even Rats, offer entertainment in abundance.

Rats has everything a horror fan could want: gory, wet, goopy corpses; dead bodies filled with rats making the corpses walk until it falls and the body bulges and explodes with the hungry, mutated rodents; and rats leaping to bite and gnaw at the flesh of human faces.

Despite the excellent gore effects, there is one effect that is laughably bad. To create the visual of an army of rats marching on the gang of bikers, there are toy rats attached to, maybe, a rug. This rug is pulled along the floor along with a blurred camera effect, making it difficult to see the rats in detail as they pass the camera. It’s a laughable but wholly entertaining effect — and needed since the live rats are so docile in their shots.

Rats comes to its finale in the only way it could. 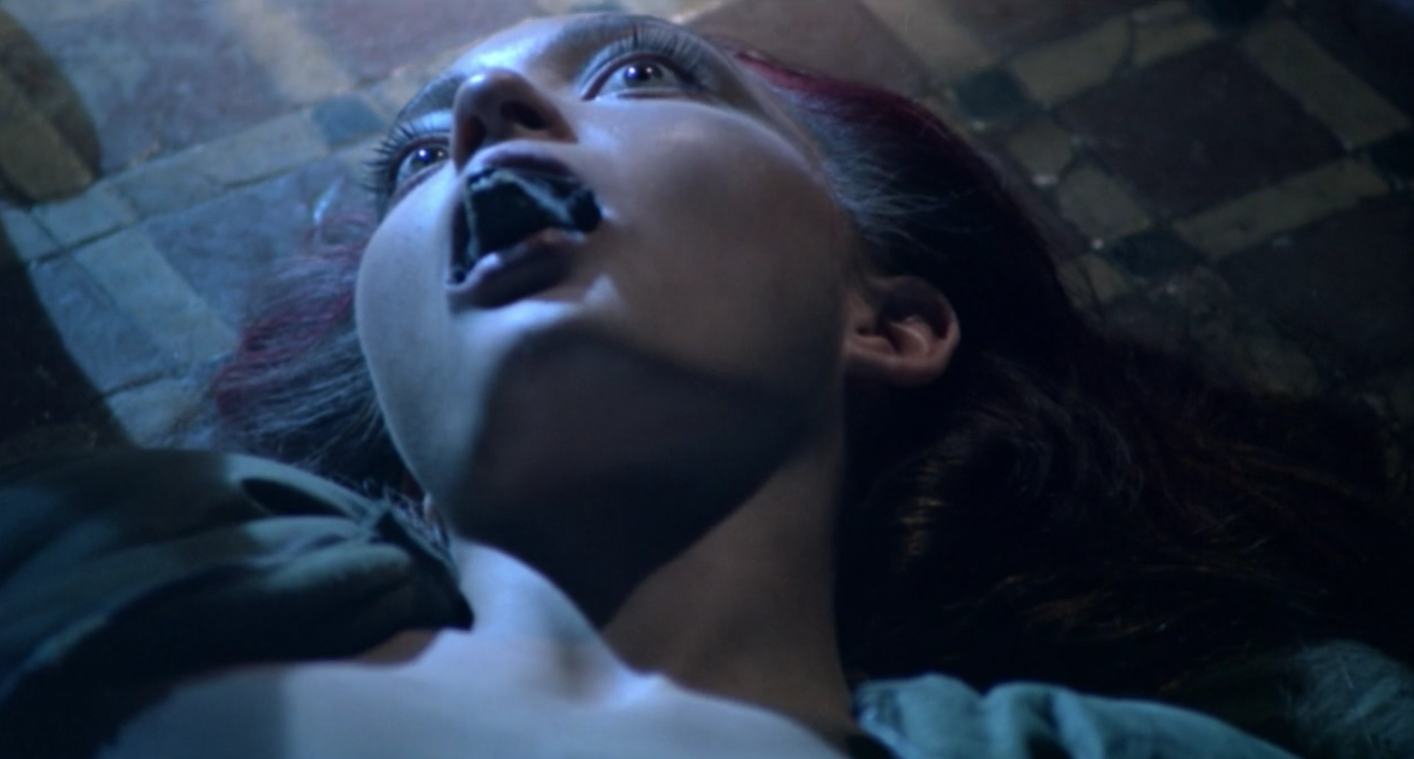 I won’t ruin the ending, but Mattei gives fans the ending that, I think, is hoped for.

Rats: Night of Terror will not be a movie I revisit often, but I’m glad I took the time to seek it out. Despite the movie not being traditionally scary, there is certainly something creepy about hundreds of scurrying rodents that makes the skin crawl and the goosebumps rise.

Rats: Night of Terror is available to rent or buy on Apple TV, or stream for free with a Full Moon streaming subscription.