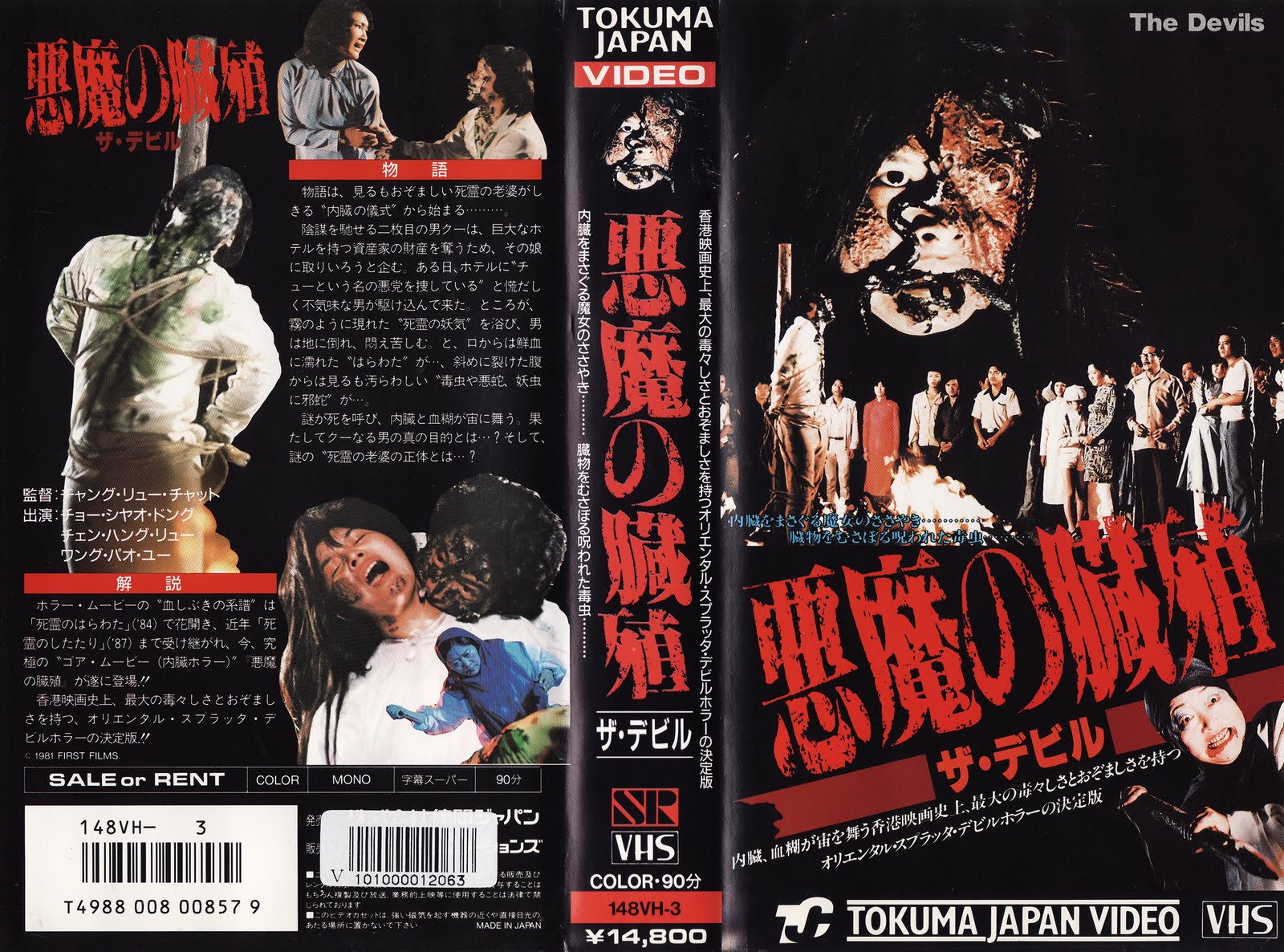 I’m not sure how I came across the Jen-Chieh Chang directed The Devil (1981)(aka Xie Mo). I clearly remember reading a description of the movie being Fulci inspired, and after some searching, I found the trailer. After watching the first 30 seconds, I knew I had to find this movie.

The Devil begins mysteriously with a woman waiting, suitcase in hand, for a train to arrive. Soon the person she’s waiting for arrives. But instead of a pleasant meeting, the woman is brutally murdered with a rock to the head. Then, after some lengthy shots of the train traveling along its track, the scene shifts. And what a shift it is.

A man is lying prone on a table, naked from the waist up, his torso covered with angry looking holes. A woman tends to him, using hollow tubes of a sort to insert into his torso, arms, and face to allow pus to drain into buckets that surround the man. The woman prays to a snake god, before brandishing a knife to cut the man’s stomach open. His body is filled with worms, small snakes, and centipedes.

The woman confirms that he has been cursed by witchcraft, prepares a potion for the man to take, and he proceeds to vomit out goo, worms, and snakes. Once cured of the curse, and his wounds bandaged, he is advised to not drink anything cold for three days or have sex with a woman for 7 weeks.

All of this happens within the first ten minutes! It is glorious.

The plot involves the angered spirit of the murdered woman looking to exact vengeance against those involved with her death. There’s another plot involving a conman who quickly begins a relationship with the daughter of a hotel owner. Too quickly, in the mind of the daughter’s cousin, who happens to manage the hotel and is the son of the curse healer from the beginning of the movie.

Eventually, the story lines converge to revolve around the angry spirit, the conman’s evil machinations, and the owners of the hotel. A character that somehow inserts himself into all the characters’ lives is that of a pre-teen bell boy at the hotel, named (I kid you not) Ding Dong. The bellboy acts as a kind of comic relief amidst the horror and family drama.

The movie does appear, at least during the scenes of horror, to be directly inspired by Lucio Fulci’s films.

The scenes involving the witchcraft curses and the angry spirit are awash in bright red and green lighting. The victims of the curse would not be out of place in Fulci’s The Beyond. Green pus vomit and all kinds of bugs, worms, and snakes force their way out of victims’ mouths and skin.

The angry spirit is a horrific wraith, with her half-damaged face from the rock attack and one eye hanging askew. The makeup and special effects work in The Devil is incredibly well done and can, at times, cause queasiness. There are no fake worms used in the curse scenes, the actors are spitting these creatures out of their mouths.

The color and thickness of the vomit/pus is enough to turn the stomachs of the most veteran horror fan.

As horrific and neon-dreamlike the scenes of horror are, the drama involving the conman is shot in bright sunlight or well-lit rooms with white walls. It’s such a drastic tonal shift from the other scenes that it gives a disorienting effect, which elevates the weirdness of the entire movie.

The Devil should be a cult classic, a movie spoken about whenever Asian and Italian horror movies are brought up.

The movie is intense, disgusting, overly dramatic, and the acting can be over-the-top. It all comes together in an extraordinary way to create a movie experience that you won’t soon forget.

Make sure you have a vomit bag handy.