What We Do in the Shadows (Season 2, Episode 6)

Posted by:
Tags:  FX Hulu Mark Hamill Matt Berry What We Do in the Shadows

This week on our favorite show, we go on the run and start a new life with Laszlo after getting challenged to a duel by the one and only Mark Hamill. 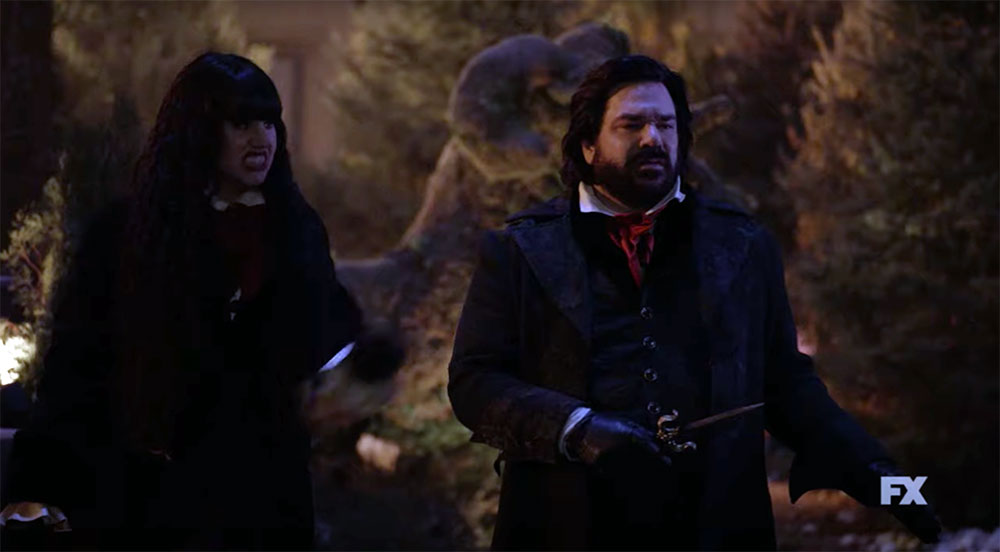 “There is no honor in defeat. I’ve never paid the piper in my life, and I won’t start now.” – Laszlo Cravensworth

We’ve been teased with pictures of Mark Hamill dressed up as a vampire for weeks, and we finally got introduced to him this week in the form of a vampire who has come to challenge Laszlo to a duel.

Laszlo (Matt Berry) is a man who never pays the piper, and he ran out before paying his bill for the room he once rented from Jim the Vampire (Hamill) in California. Jim never forgot the slight, and he has been hunting Laszlo for years. Jim has finally found his man, and he’s come to force Laszlo to pay his debt — or pay the consequences.

Before the two can fight to the death, Laszlo runs away to a hotel where he has stowed away his human disguise (a pair of blue jeans and a toothpick), committed to starting a new life somewhere he can’t be found. 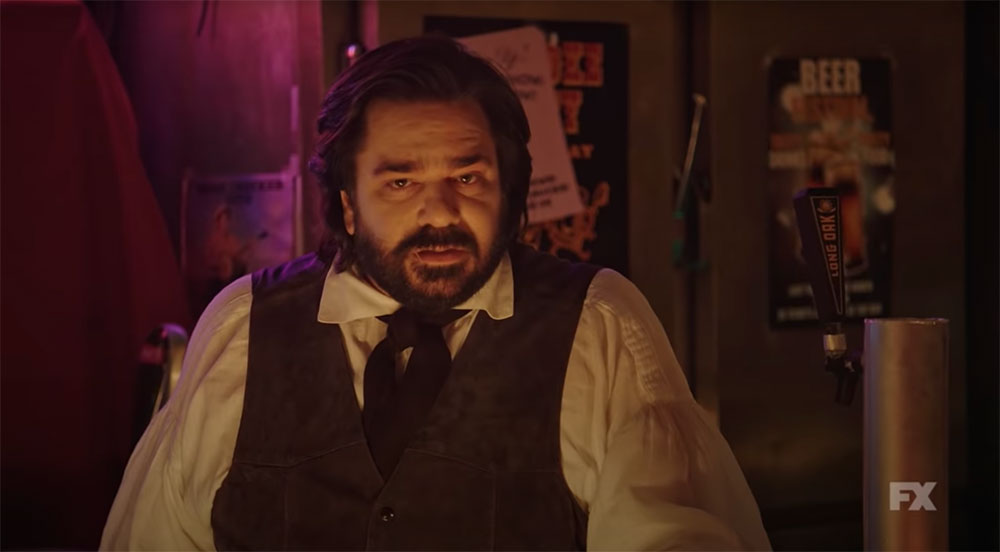 He writes Nadja a love letter then heads east, landing in Clairton, PA (the small Pennsylvania town where parts of the Academy Award-winning film The Deer Hunter was filmed).

I’ll admit, I might have geeked out a little when I found out that ol’ Laszlo had settled only a few miles away from where I live.

Laszlo’s disguise as Jackie Daytona isn’t just for show. He quickly adjusts to small town life, and his whole personality changes. In order to integrate into the community, Laszlo becomes heavily involved in the local girls’ volleyball team, cheering them on to the state finals while becoming close to his human bartenders and patrons.

When the girls make it to state (with a little help from Laszlo), he throws a party at the bar to celebrate. He’s upset to learn that the team doesn’t have the funds to travel to the state tournament, and and he decides to throw a fundraising event to help them out: a talent show.

The night ends with an unexpected guest: Jim the Vampire. 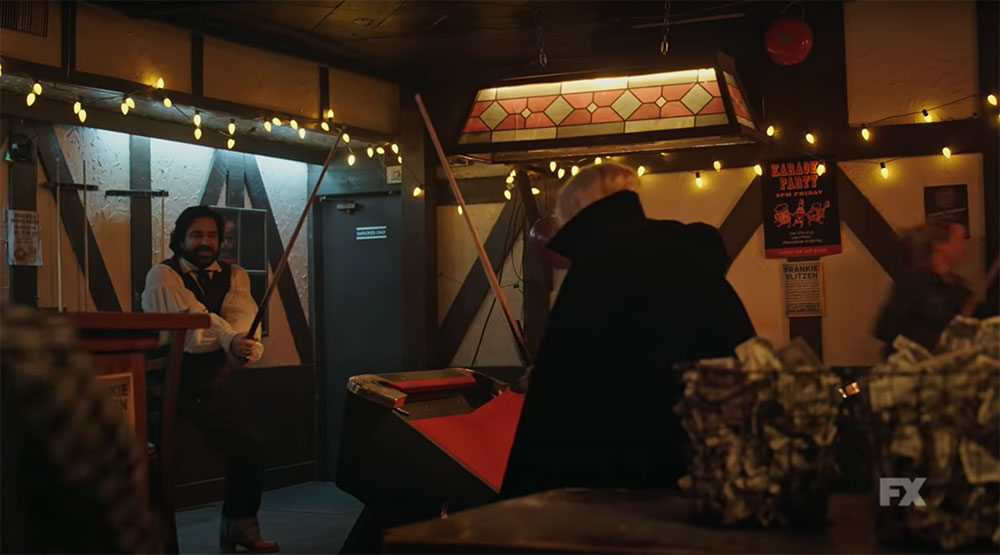 Jim doesn’t recognize Laszlo in his human disguise (“It’s the toothpick”) and just wants to hang out and have a nice chat. Laszlo considers fleeing after the close encounter, but he’s too invested in his new life and too focused on the fundraiser. The event is a smashing success; that is until Jim returns to help support the fundraiser and discovers that Jackie Daytona doesn’t cast a reflection. The two get into an actual fight, ruining the event and shaking the townspeople.

In a touching and hilarious turn of events, both vampires have fallen in love with the team and the people of Clairton. Laszlo pays off his debt to Jim in the form of a Big Mouth Billy Bass. He finds a way to make sure the team can still go to state, helps clear the town folks’ minds of all this messy vampire business, and gets Jim a gig as the new team coach.

Jim has found a new home and Nadja has gotten her beloved Laszlo back. It seems to be the perfect ending, until Jim discovers that his prized Big Mouth Billy Bass isn’t as rare as Laszlo said. Here’s hoping that means we’ll get to see more of Hamill in a future episode.

What We Do in the Shadows remains a fresh and exciting show to tune into every week. 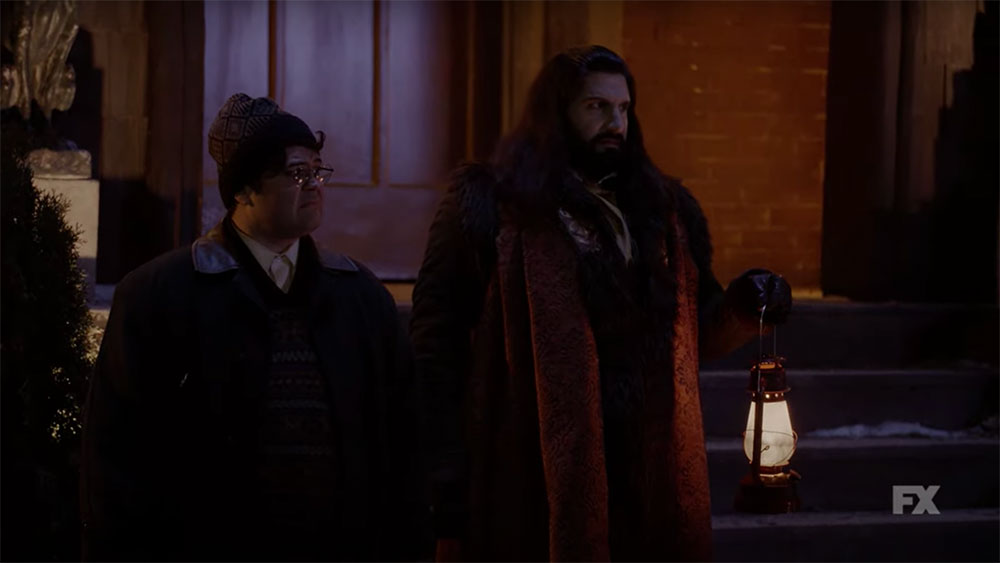 While the first episode focused a lot on Nandor, this season has done a fantastic job of putting a spotlight on previously overlooked characters by dedicating entire episodes to them.

I’m missing ol’ Nandor a little bit, but focusing on everyone else a little more has kept the show compelling while letting the cast members showcase their diverse talent and humor.

As a longtime Matt Berry fan, this episode left me cackling — and impatiently waiting for next week’s episode.