“Bite Me” is a charmingly relatable gem for romantics, outcasts, and anyone with a thirst for something different in a bloodsoaked sub-genre.

Love is a many splendid thing.

But that type of sentiment would probably induce projectile vomiting for the male and female lead of the 2019 romantic feature, Bite Me.

The sophomore feature from Meredith Edwards attempts the bold swing of mixing not only horror and comedy elements, but throws in romance as well…effectively creating an endearingly mixed bag of elements that is real, funny, and relatable in presenting a story about two jaded individuals battling deeply ingrained insecurities with themselves in order to work together successfully as a couple.

Oh, and one of them just happens to be a vampire.

Vampirism as a metaphor for love & acceptance is nothing new; it has been done to magical effect in films like 2014’s A Girl Walks Home Alone at Night and 2008’s Let the Right One In.

What separates Bite Me from these — and affords it a unique spot in the cinematic canon — is in the emotional approach it takes in analyzing issues of self-image, grief, and insecurity.

These are explored through our main characters Sarah and James, whom the term ‘jaded’ would be a mild understatement.

Even less preoccupied with being a straight horror movie than the aforementioned titles, Bite Me is a romantic comedy that utilizes vampire tropes to satirize some very real human ones.

Taking aim at identity from the get-go, viewers are offered a polarizing intro to the soft-spoken but decidedly prickly Sarah (played by Naomi McDougall Jones, doing triple duty acting as lead, writer, and producer). Purple-haired, facially tattooed… first impressions establish her as a bit of a social misfit, and she opens the movie with a monologue about judging others based on appearance.

One gets the impression that Sarah’s appearance acts as armor, to keep others at bay.

To be fair, she has not had the most heartwarming trajectory until this point. Most of her high-school career was spent pining for a boy that hardly knew she existed, and her luck has not increased in adulthood (having had sex once in the past 8 years).

Not all is doom and gloom for Sarah, as she does have support systems in her fellow vampire roommates.

Sarah’s roommates are played by the wonderful Naomi Grossman (known for her incredible transformation as Pepper in the American Horror Story: Freakshow) and Mahira Kakkar (herself from NBC’s genre-bending 2018 series Manifest).

Together, these three women (and many others) have formed a church called the House of Twilight (NOT to be confused with the books). One of the fundamental goals of the group is to proverbially ‘come out of the coffin’ and no longer feel compelled to hide certain aspects of themselves from mainstream society.

Additionally, they would like to demonstrate that for as many differences there might be, there are more similarities. These vampires can walk in sunlight, they contradict themselves and are vain and flawed. Furthermore, they have to deal with the annoying realities of everyday life, like answering to the IRS.

James (Christian Coulson, best known for playing Tom Riddle in Harry Potter and the Chamber of Secrets) has a status in life that is not much more inspiring than Sarah’s.

He works at a job he dislikes and has tenuous support systems at best in his co-worker/roommate Faith (delightfully portrayed by Annie Golden, Norma from Orange is the New Black) as well as the strained relationship between him and his mother.

Essentially, James is isolated. And though he is conventionally attractive, he still struggles with establishing genuine connections with others. Naturally introverted (and keeps a stuffed animal named Mellowtron), he loves to read. His favorite show is The Bachelor (a fact he does not readily admit to others). And the abandonment issues that resulted from an estranged father have made him someone who does not have much belief in himself, let alone anything. At one point, he actually utters “I don’t think I have any beliefs”.

This sort of blank slate effect that he exhibits ends up being an interesting foil for the more dramatic and opinionated Sarah.

The development of their relationship fuels the bulk of the movie, with colorful social commentary comprising the rest.

For a film about love, the assertion that deep communication can be extremely sexy is incredibly inspiring.

Adding some variety to these romantic developments is some commentary and addictively cute vampire puns. Viewers are gifted with such phrases like “pity suck”, with humor permeating this light and fluffily distinctive vampire tale, which is one of the more notable departures from traditional vampire depictions on film.

The blood-drinkers of Bite Me are more preoccupied with finding purpose and companionship than they are with worrying about stepping into the sunlight (UV rays do not affect them at all…unless you count a sunburn).

The script is more concerned with using vampire status as a stand-in for the pervasive discrimination that anyone who is slightly different from the mainstream receives. 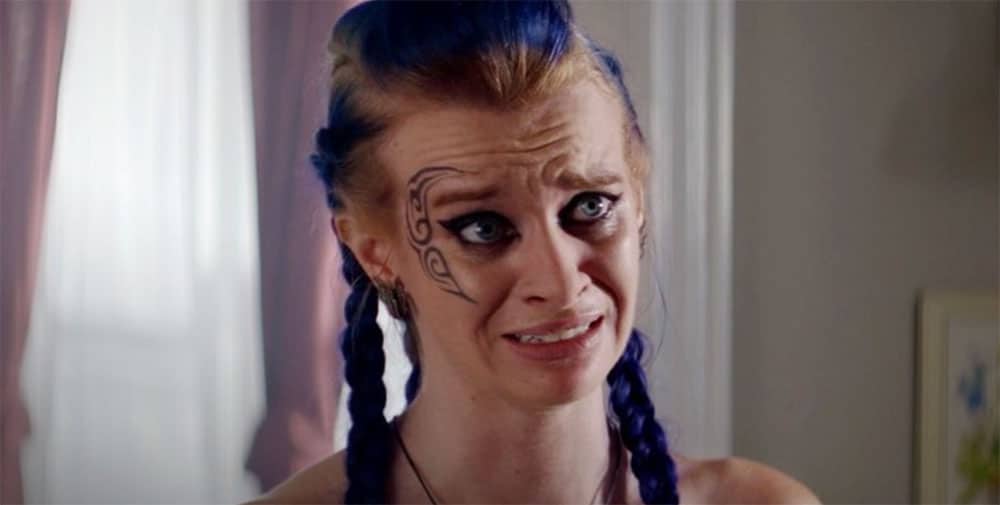 The alternate title of this movie could have been “Vampires! They’re Just Like Us” due to how ordinarily these individuals are presented.

They are try-hard, anxious (feeling like everyone is always staring at them), care way too much about personal appearance (one character opts for elective cosmetic surgery for fangs). Yep, the vampires of this movie do not even have fangs.

These difficult and biting topics, like job identity, insecurity, depression, and self-worth crises are the true pumping heart of the story. For some viewers, this will be a welcome and unique way to tell a story of falling in love. Those looking for more straightforward vampire action with gore and mayhem will be left wanting more.

Ultimately, Bite Me is an attractive, lovable & endearing gem that looks great and is frequently charming and real — an inviting fable that approaches its wacky concept with grounded reality.