Home is where the horror is, and these 13 spooky destinations will make your horror heart feel at home even while far away on vacation. 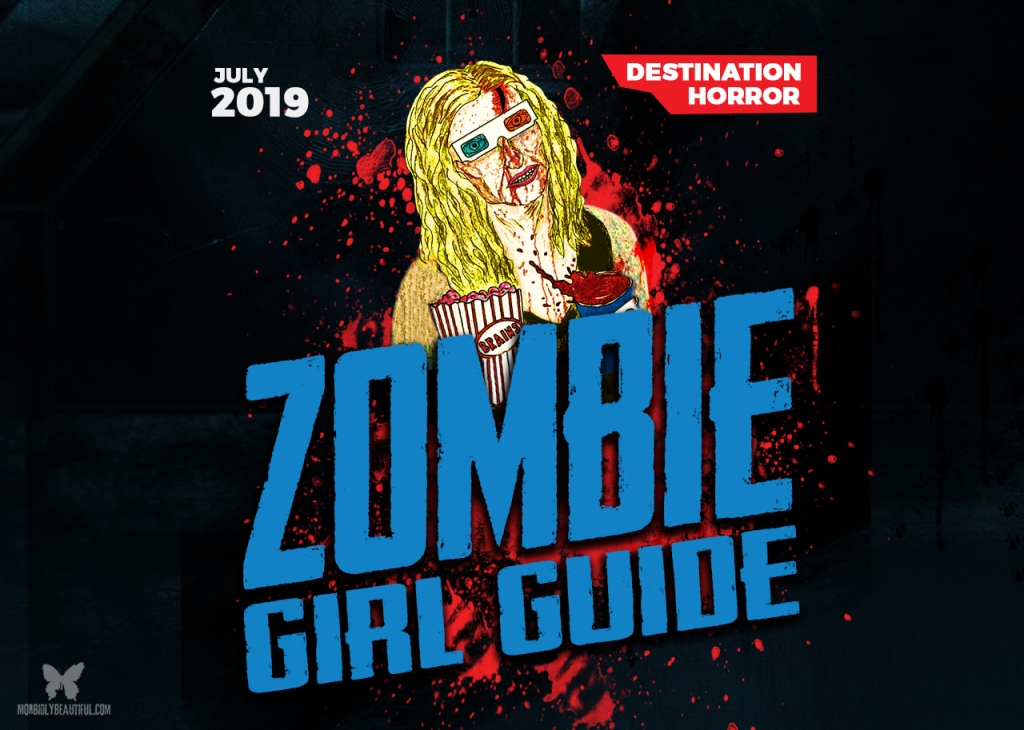 In the debut of the Zombie Girl Guide, I shared 13 horror films that could make you rethink your Summer vacation plans. But assuming you still have a healthy dose of wanderlust and are looking for something a little different for your next vacation, this list has you covered. I found 13 horrifically unusual places across the globe to entice your black horror hearts into traveling! From haunted houses to crypts, themed hotels, ghost towns, horror film locations and mental hospitals. There is something for every fan of the macabre.

I love to travel, and I adore the macabre. In years past, I didn’t have a lot of choices of cool locations. They were out there, of course, but it was hard to find them. Now with the internet and Airbnb, there is an abundance of horror vacations just waiting for weirdos like me (and you) to visit and play. I originally thought to make this a summer vacation story, but many of these locations are better with a dark and stormy ambiance. Visit them whatever time of the year works for you. I have been to a few of these, but most are still on my bucket list. This will not be my last; I hope to write many of these lists and start checking the places off, one by bloody one.

Please enjoy The Zombie Girl’s Guide to 13 Horror Vacations to Die For! 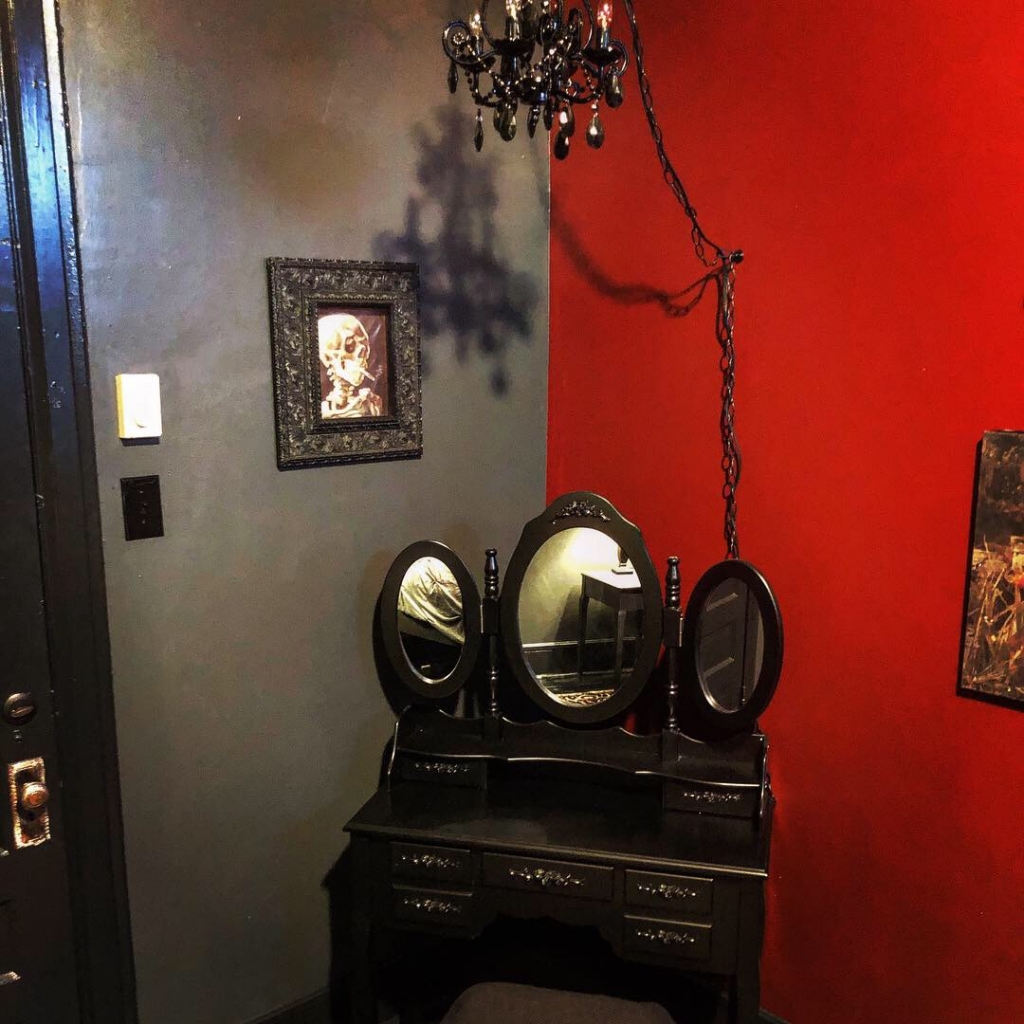 This is one place where I really need to go! The Black Monarch Hotel is a historical property, modernized into a boutique hotel. Once a brothel and saloon during the Gold Rush, there is no surprise that a ghostly miner wanders the halls. The rooms themselves are the best part. Inspired by famous serial killers, each room is unique and creepy as hell. Killers such as Elizabeth Bathory, a Hungarian noble woman who killed 600 of her young servant girls and HH Holmes, who confessed to killing 27, but is said to have killed as many as 200, are immortalized here.

Some guests have reported being woken in the middle of the night by the sounds of women laughing or men screaming at each other. In addition to trying to sleep here, the new owner is planning to do burlesque shows, feature circus performers and host unconventional weddings. If anyone gets married here, I need an invitation! 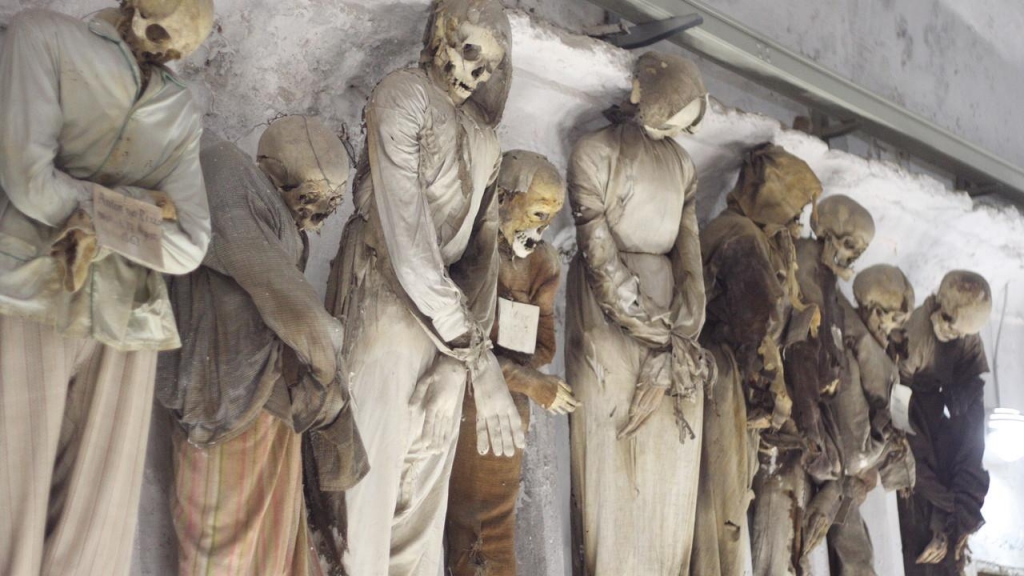 I’ve been to Italy, and it’s one of my favorite places in the world. But here is a place I have not seen yet. In Sicily, the city of Palermo boasts one of the world’s most bizarre and morbid tourist attractions. Inside the Capuchin Monastery, you will find nearly 8,000 corpses, dressed in their Sunday best. Pinned to the walls, sitting on benches and shelves, and tucked away in open coffins, the residents wait for you. The oldest corpse is Silvestro da Gubbio, a friar who passed away in 1599! Nothing stands between you and the dead except a rope and sign asking you to be respectful.

If bodies are your thing, this might be a great side trip if you are also visiting the city of Pompei or Herculaneum, which were preserved by ashes after the eruption of Mount Vesuvius in the year 79AD. 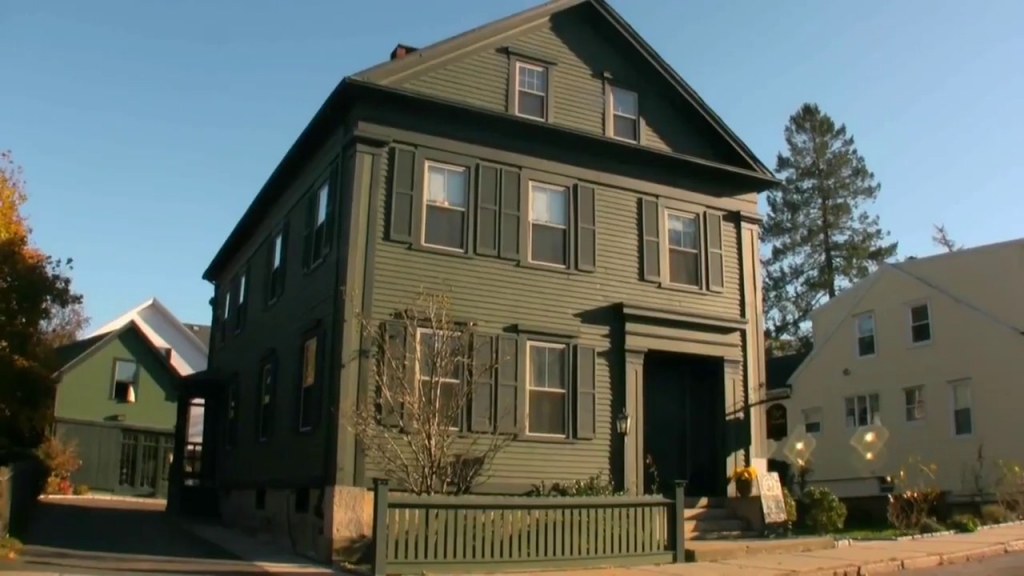 Remember the poem: “Lizzie Borden took an ax and gave her mother forty whacks; When she saw what she had done, she gave her father forty-one”? To many people, the name Lizzie Borden calls forth little more than a folk rhyme and a vague sense of sensationalism, but the 1892 axe murders were very real. Abby Durfee Gray Borden and Andrew Jackson Borden were brutally murdered in their home. Due largely to botched investigative work, Lizzie was acquitted of the crime and no one else ever charged.

But the site of the massacre is still there today, where you can tour the museum, participate in ghost hunting nights or even stay overnight at the bed and breakfast. This is another location I am dying to go to; I have always been fascinated by this story. In the sitting room there is a couch almost identical to the one Andrew was napping on when he was murdered. If that’s your thing, you can get your photo taken right where the attack occurred. 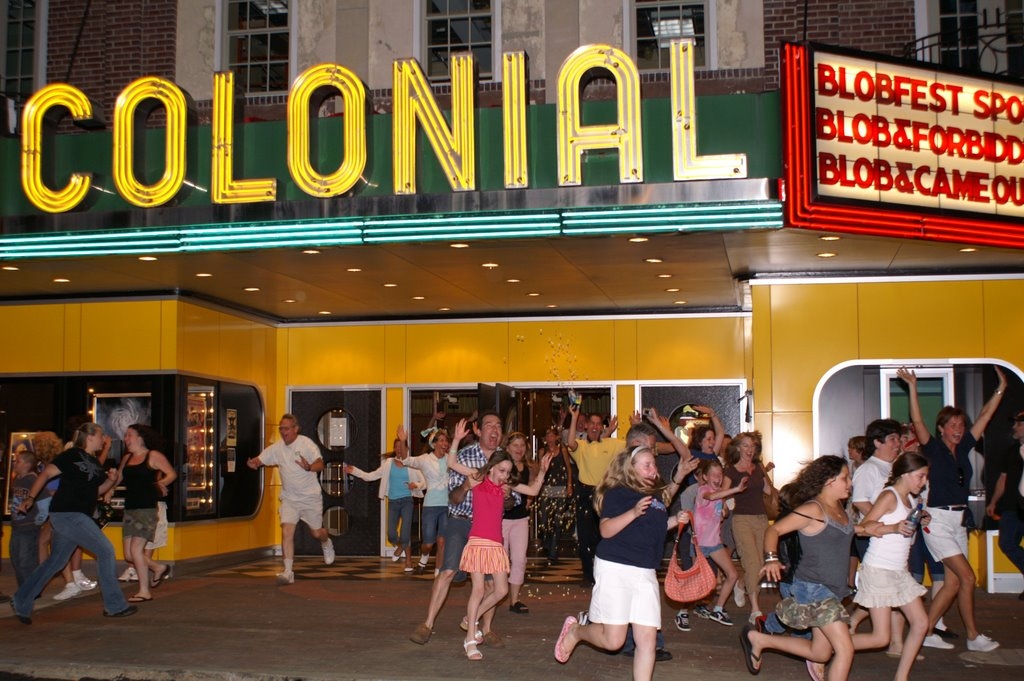 The Blob was one of my favorite childhood films. I watched it so many times, I could almost quote it. I was always so worried the little dog would get eaten. So, the Colonial Theatre, where they filmed the famous gelatinous creature, is a must-see destination. They go all out every year with “Blobfest”, a super cool film festival where one of the highlights is a reenactment of the famous scene of moviegoers fleeing the theater.

I need a photo doing this so badly! It literally just happened this year, so I know what I want to do for my birthday in 2020! Who wants to go? 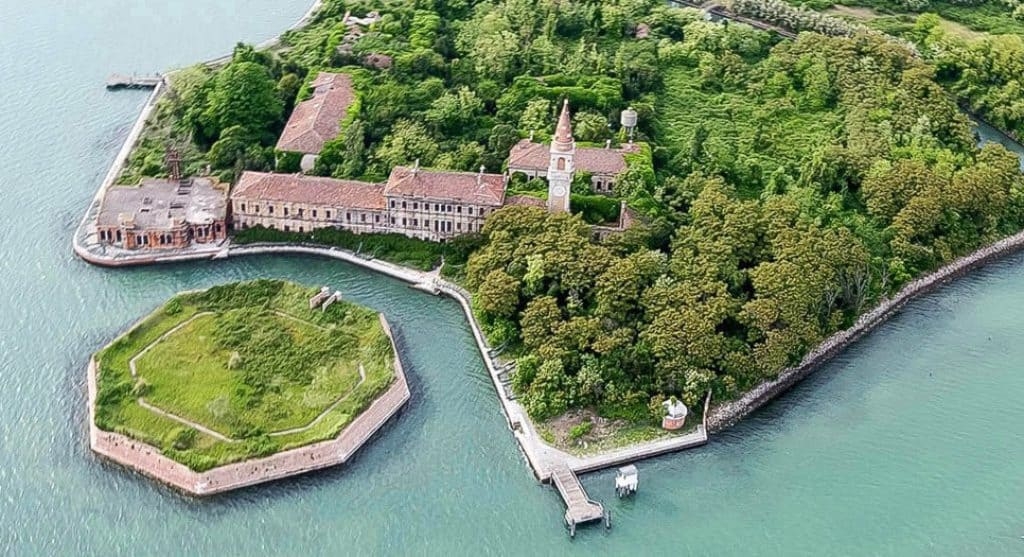 Rumor has it that Poveglia Island is haunted by the “hundreds of thousands” of people who died on the island throughout its centuries of use.  This was a place of quarantine, a place to burn plague victims, an insane asylum run by a murderous doctor, and a nursing home/hospital. Ghost Adventures did an episode here, so it must be haunted right?

I would use any excuse to go back to Italy, and this crazy island near Venice sounds amazing to me. I honestly don’t know which tour to pick — but there are many that take you to the island. Don’t go if you are sick, they might leave you there! 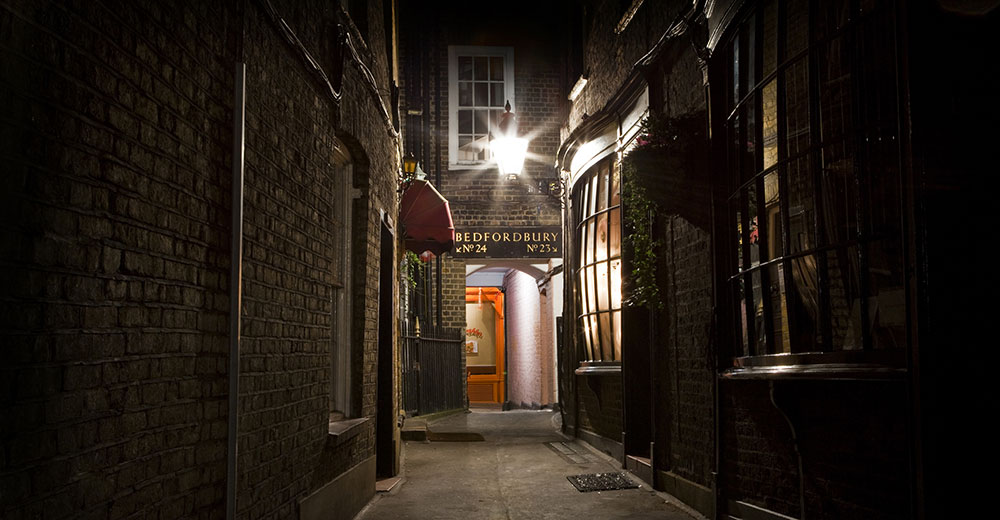 No trip to London is complete for a horror lover unless you take a Jack the Ripper tour! I had such an amazing time on ours, simply because the guide was so perfect. Having written books on the subject, and full of English humor, he was the best guide we could have hoped for.

There are many tours of the infamous Whitechapel sites. But do your homework, and of course, go at night. It was foggy the evening we went, and that made it even more memorable. 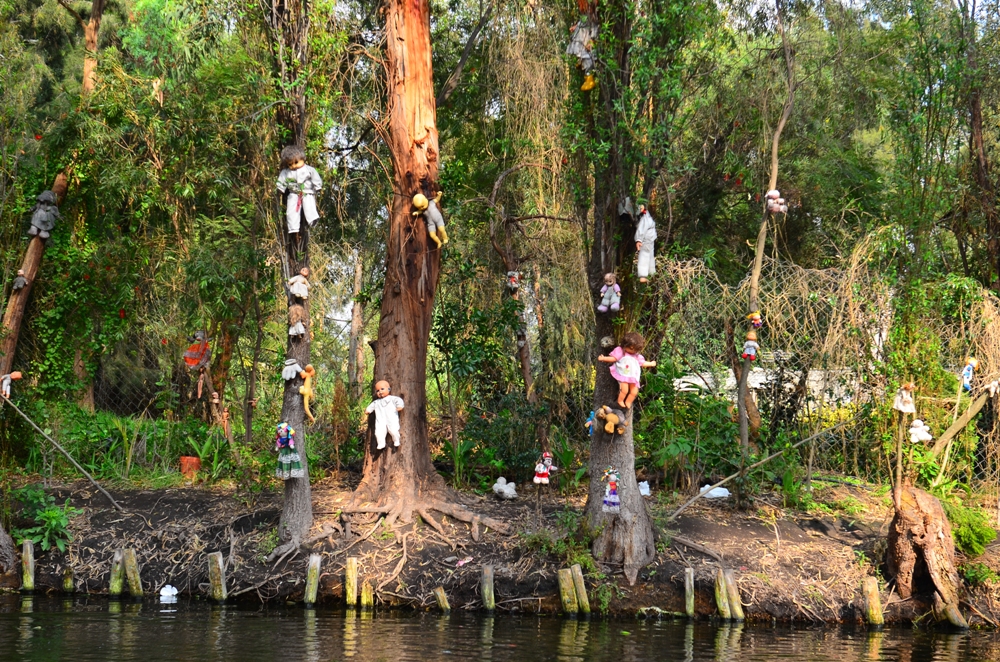 Isla De Las Munecas is a creepy place. The legend is that a little girl died off the coast of this island, near Mexico City more than 50 years ago. After her death, several dolls began washing ashore. The island's only permanent resident at the time was a recluse and began hanging the dolls from trees. Then he started collecting all the dolls he could find and hung them from trees. Now there are hundreds. And they are all looking to suck out your soul.

This would be a perfect side trip if you are going to Mexico City for the Dia de los Muertos (Day of the Dead) celebration. But it could be very crowded, so book ahead!