All grown up at 35, the quintessential ode to youthful rebellion, “The Lost Boys”, remains just as influential, iconic, and endearing. 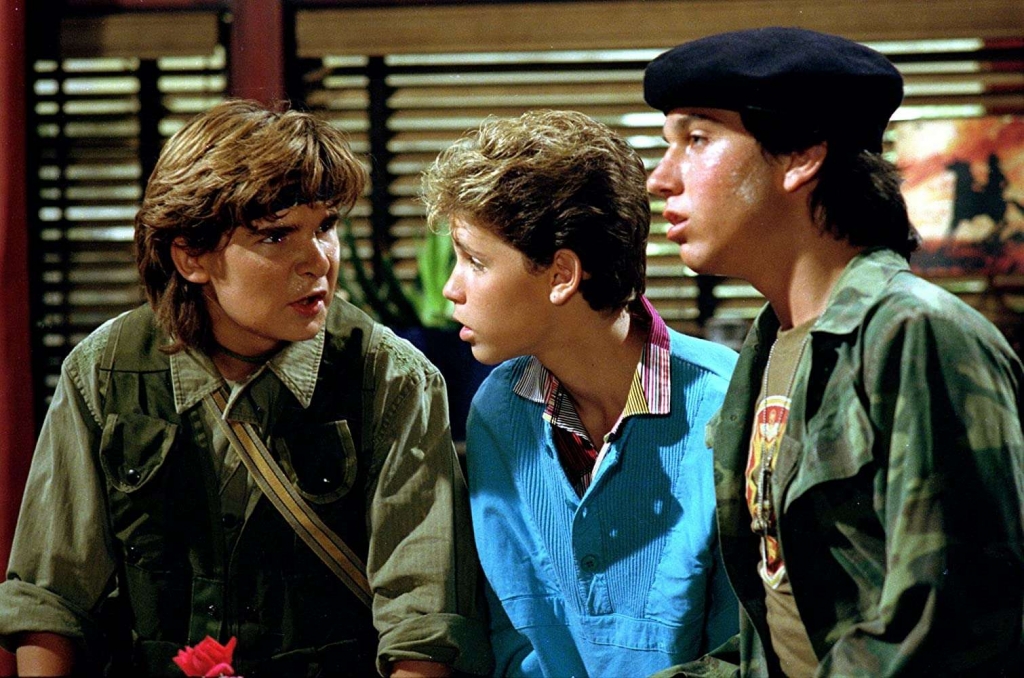 Celebrating thirty-five years of fun this July, the 1987 mainstream horror comedy, The Lost Boys, continues to be a timeless film about vampires, memorable dialog, and a kick-ass rock and roll soundtrack.

Directed by the late Joel Schumacher, The Lost Boys was a true summer blockbuster, grossing over $32 million from an initial budget of $8.5 million. The concept of the film was influenced by J.M. Barrie’s Peter Pan stories. Producer Richard Donner brought on Jeffrey Boam to aide writers Jan Fischer and James Jeremias in changing the characters from small children to young adults. They also wanted to give it more sex appeal and avoid becoming another Goonies storyline.

The fictional town of Santa Carla is really Santa Cruz and was changed to appease the city’s concerns of unfavorable impressions after the violence depicted in the 1983 film, Sudden Impact.

Warner Brothers also produced a killer soundtrack with a nostalgic bite. Thomas Newman composed the film’s score, but the soul of the discography is a rock and roll concert unto itself.

The film’s starting montage introduces everyone to Santa Carla and sets the bar high with a jazzy rendition of The Doors’ “People Are Strange” from Echo and the Bunnymen.  Other popular songs from the soundtrack include Lou Gramm’s “Lost in The Shadows”, INXS and Jimmy Barnes’ “Good Times” and Gerald McMahon’s “Cry Little Sister”, the official theme song.

Who can ever forget the iconic shirtless performance of Tim Cappello belting out “I Still Believe?”  Cappello still tours today with The Lost Boys being the highlight of his career.

The Lost Boys are a stealthy young group of bikers: David (Kiefer Sutherland), Marko (Alex Winter), Paul (Brooke McCarter), and Dwayne (Billy Wirth) — all glam and gothic in fashion, with a few mullets. 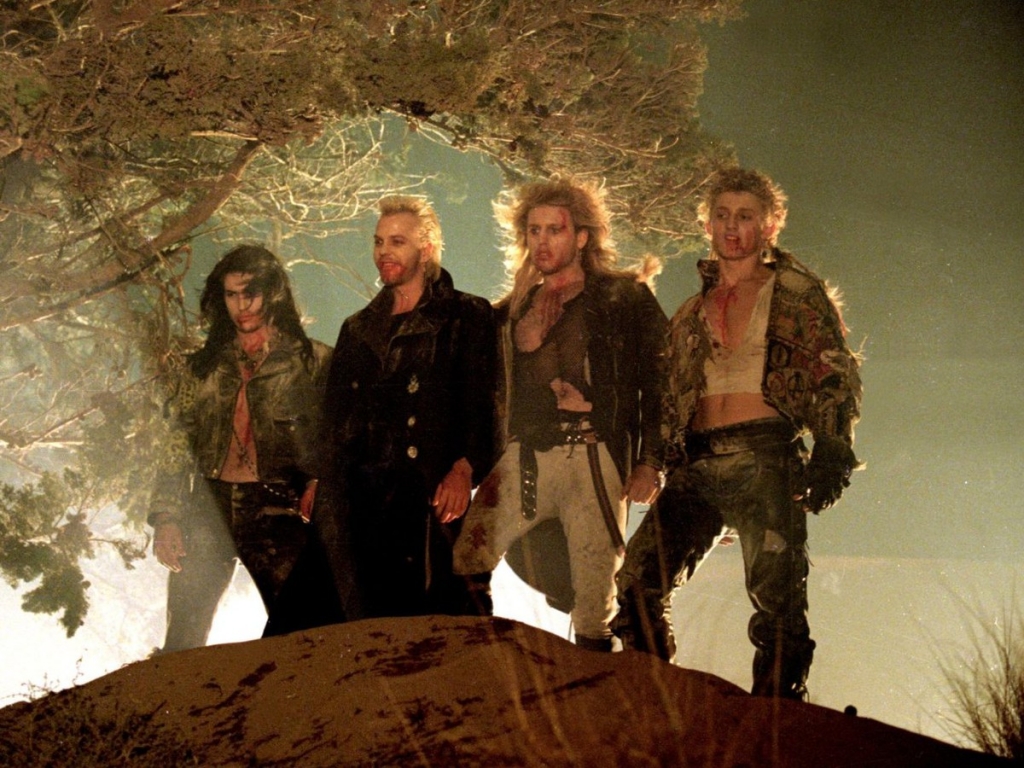 The group is ordered to leave after inciting conflict on the carousel.

Later that night, we witness the first kill.  We don’t see the vampires themselves attacking but view the horror through the security guard’s reactionary shots.

Driving through the diversity of Santa Carla — which happens to be wallpapered in missing person fliers — we meet Lucy (Dianne Wiest), her two sons, Michael (Jason Patric), Sam (Corey Haim), and their dog, Nanook.

They are on the move following Lucy’s divorce, with a plan to stay at Grandpa’s (Barnard Hughes) place in Santa Carla until they’re back on their feet.

Grandpa’s house looks like a taxidermy paradise Drayton Sawyer would Airbnb for. His unconventional ways — including not having a TV, his special shelf in the fridge, and the way he showers Sam with “stuffed” presents — bring comedic charm to the family’s situation. 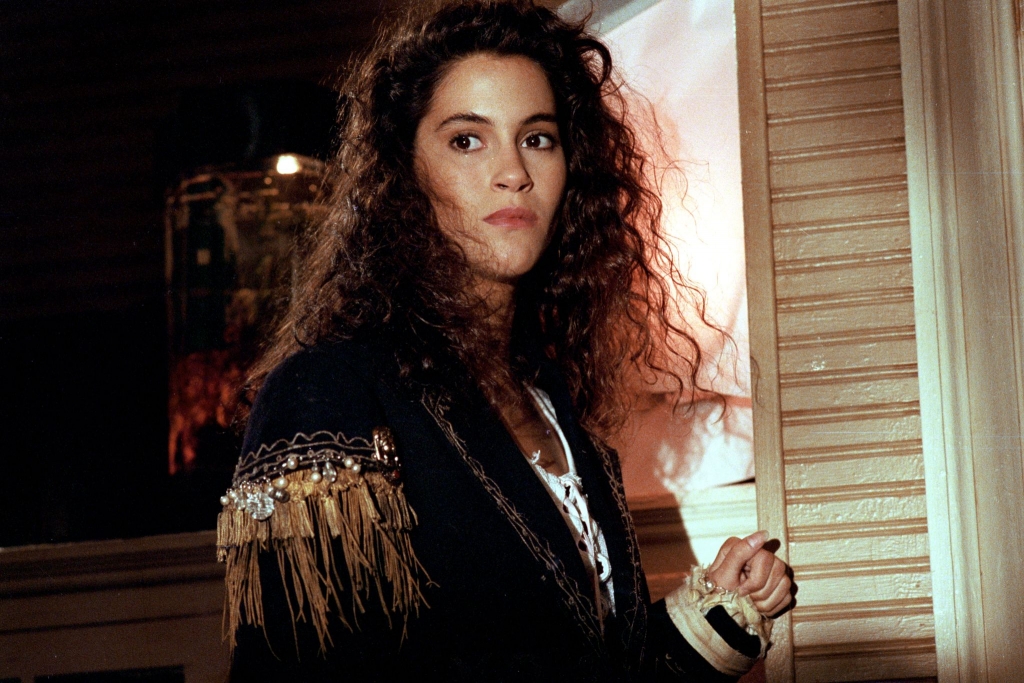 Lucy scores a job at the video store thanks to Max (Edward Herrmann), the owner, who is taken in by her nurturing nature.

Little does Sam know his life is about to change when he is interrogated by the “Ramboesqe” Frog Brothers: Edgar (Corey Feldman), and Alan (Jamison Newlander).

The rest of the journey leads Michael towards Star while David and the group intercept the connection and lure Michael through the thick fog back to their cave.

David plays on Michael’s insecurities over the trickery of Chinese takeout: rice or maggots?

With a burning desire to belong, Michael drinks “wine” from the jeweled blood bottle against Star’s pleas. Refusing to give in to his vampiric rite of passage, Michael has the support of Sam and Star.

Together, they find a way out of the hands of David and his Boys by enlisting the help of the Frog Brothers.

The Lost Boys culminates in an epic showdown involving a crashed baptism on the quest for holy water, a “death by stereo”, and one garlic-soaked bath that turns the house into a Drano extravaganza. 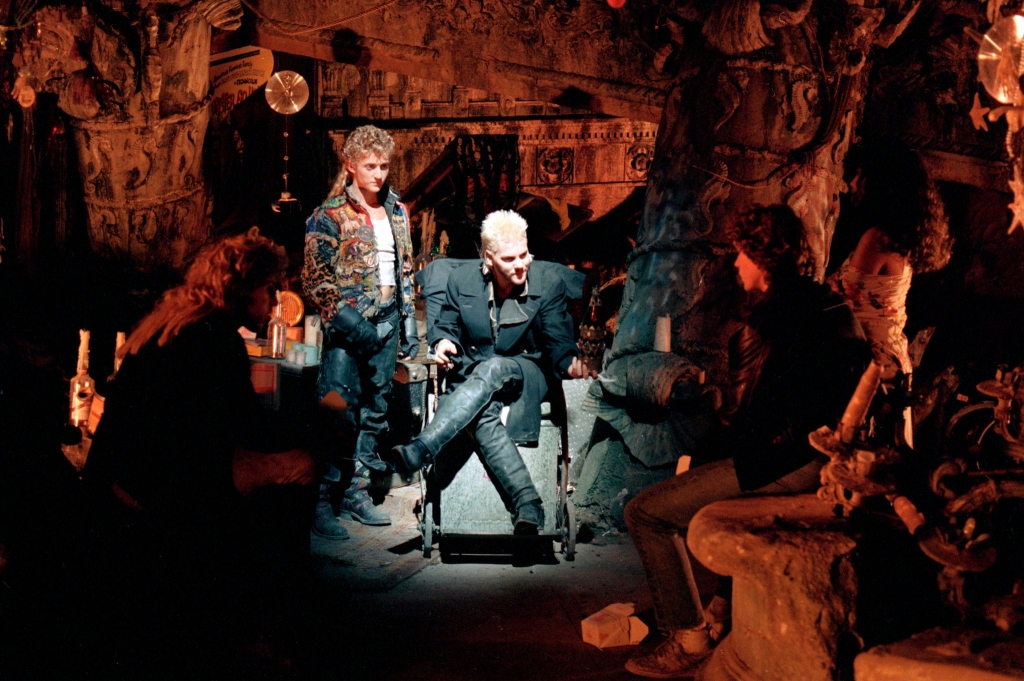 Max reveals himself to be the head vampire in hopes of a “Brady Bunch” union with Lucy, but Grandpa saves the day by tooting his own horn and harpoon-staking Max into the fireplace with combustion.

While everyone embraces in relief, Grandpa calmly delivers the greatest punch line:

“One thing about living in Santa Carla I never could stomach. All the damn vampires!”

Michael’s transition hidden under sunglasses is a smart allegory for the emotions of emptiness and uncertainty often befalling a family after divorce.

When Max insists on Michael inviting him as “the man of the house”, it’s akin to the acceptance of a parent dating and moving on — sealing the fate of a broken union and squashing any fleeting hopes of a reconciliation.

Unfortunately, the highly anticipated sequels, The Lost Boys: The Tribe (2008) and The Thirst (2010) didn’t hit the mark for many fans, despite the original writing team being involved and Feldman serving as the lifeforce of the whole trilogy.

In the 1990s, when more films about vampires and Dracula were being released, the makeup team from The Lost Boys left an everlasting imprint on the genre.

When it comes to the facial look of a bloodsucker, Herrmann’s makeup as Max takes the cake. Take in his long-hollowed face, the exaggerated cheekbones, raised thickness above the eyebrows, glaring contacts, and pronounced fangs; all that enchantment illuminated him as the head vampire.