“Aileen Wuornos: American Boogeywoman” is a harrowing and heartbreaking fictionalization of the making of a real-life monster. 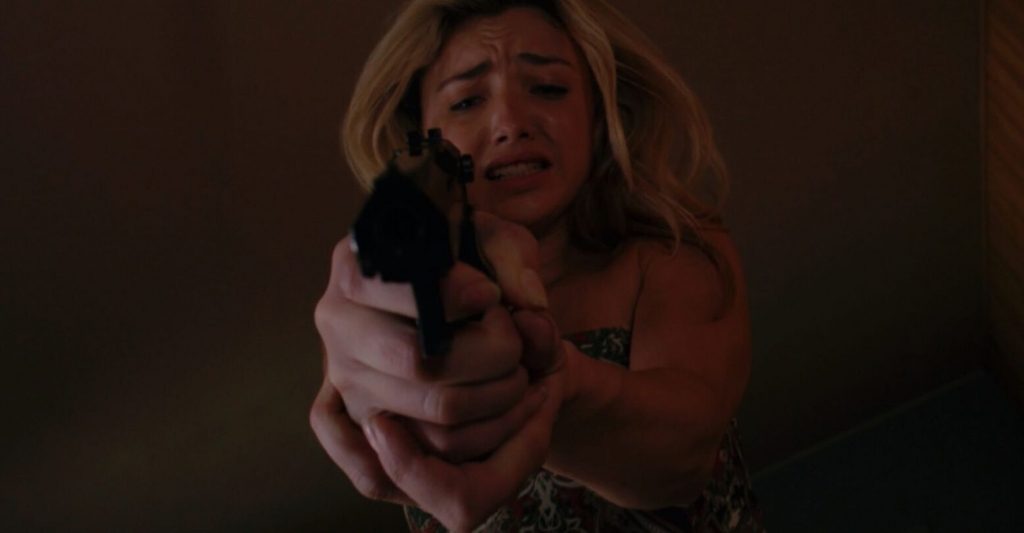 The most frightening thing about the Aileen Wuornos story to me, the real one, that is — the thing that’s equal parts terrifying and sad — is the fact that in her final interview the day before her execution, she refused to take any responsibility for her crimes; yet just a few days prior, she had “come clean” to the same interviewer and stated, “I can’t go to the electric chair with lies on my mouth,” admitting in so many words that she had committed first-degree murder against all her victims.

That was Aileen Wuornos in a nutshell.

She had every excuse in the world for what she did (shooting seven men to death in cold blood in less than a year), but her broken mind couldn’t fully cope with the ramifications. At the bitter end, the words, “You’re putting a raped woman to death,” are what she seems to have wanted to be remembered for.

Understandably, most Wuornos movies and documentaries focus on the aftermath of her rough life and on the crimes for which she became notorious.

But only one, Aileen Wuornos: American Boogeywoman, writer/director Daniel Farrands’ follow-up to the much grittier, more “horror-movie-like” Ted Bundy: American Boogeyman, focuses on a chapter of her life that is both surprising and heartbreaking.

That’s not to say Boogeywoman doesn’t have its fair share of thrills and chills, but it plays out much more like a relatable tragedy than the more straightforward Bundy film. 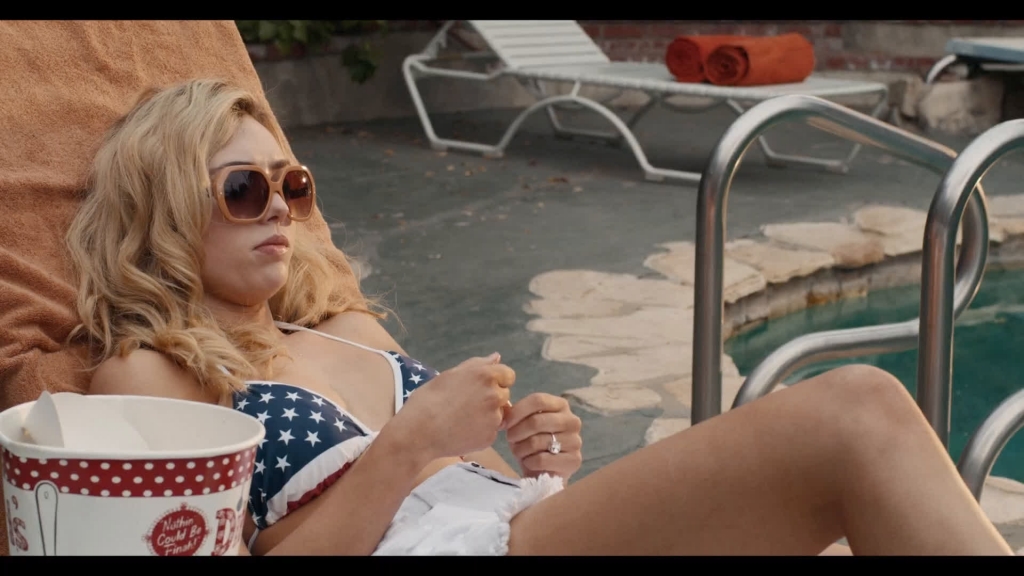 That is undoubtedly why the filmmakers cast Peyton List (Diary of a Wimpy Kid, “Emma” on the Disney Channel series Jessie, and “Tory” in Netflix’s smash hit Cobra Kai), already a veteran actress at 23 with more than fifty IMDb credits, in the titular role.

A memorable badass in Kobra Kai, Peyton gives what may be her finest performance in a role that definitely demands it: that of young Aileen Wuornos, before she became a full-blown monster.

As with American Boogeyman, Aileen Wuornos: American Boogeywoman is not a biopic but a narrative crafted to present the sort of deeper truths that only fictionalized accounts of true events can pull off; think Schindler’s List, or Ed Wood (without the black & white).

As is his wont, Farrands pays tribute to the great directors of the past, with nods to both Jaws and Psycho; but these don’t take the viewer out of the film so much as serve as a gentle reminder that this is not history but rather art on display.

To that end, there is no better reminder than “Jigsaw” himself, Tobin Bell of the Saw movies, who portrays a powerful foil for Wuornos in every sense. 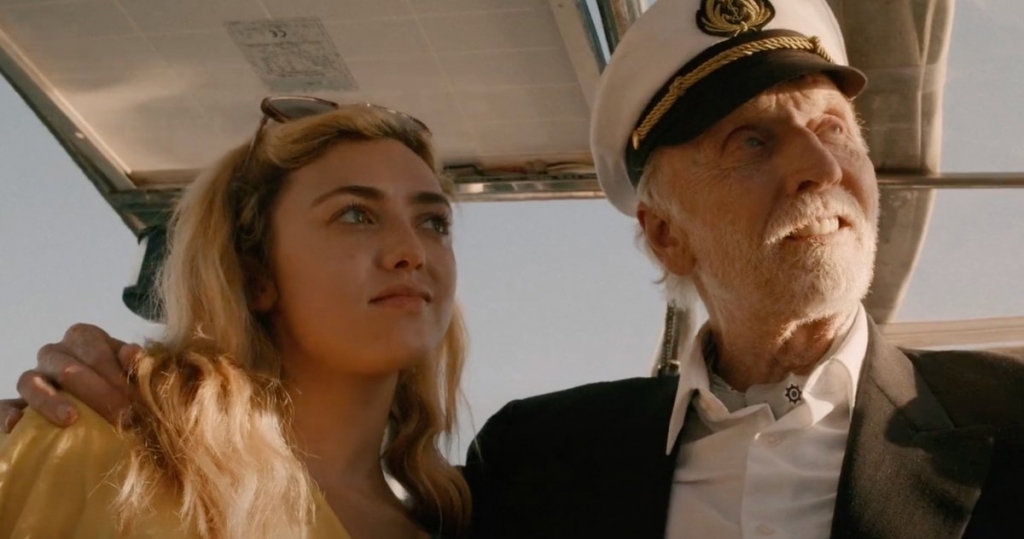 The most unlikely of people to be involved in her back story is such a wild card that I actually had to Google him to see if he was real – and, as Farrands deftly exploited with the heroes in his Bundy venture, truth may be stranger than fiction but can be even truer when presented as fiction.

Did you know that there was a time in the life of Aileen Wuornos that an older, stable, wealthy man was so in love with her that he married her and gave her a life many women only ever dream of?

That’s what makes American Boogeywoman so powerful — this little-known fact about her life focused on in a narrative for the first time — the existential tragedy of Aileen Wuornos is magnified a hundredfold.

Kane’s sled, Anakin’s mother, and Aileen’s innocence. Why not?

Read about this woman’s early life, and it isn’t difficult to understand how she could have ended up on the path that led her to death row.

Abandoned by her schizophrenic, child molester father who killed himself in prison, abandoned by her mother who had her at 14, abused and neglected by her alcoholic grandparents, in an incestuous relationship with her brother, and having been used regularly for sex since age 11, Aileen was so broken by the time she met Lewis Fell, a yacht club president nearly fifty years her senior, that it’s a wonder she was able to keep it together for as long as she did.

That is the chapter of Wuornos’ life Farrands chooses to focus on in American Boogeywoman, and the result is a surprising, heart-wrenching, gripping narrative on par with Gypsy or Coal Miner’s Daughter. 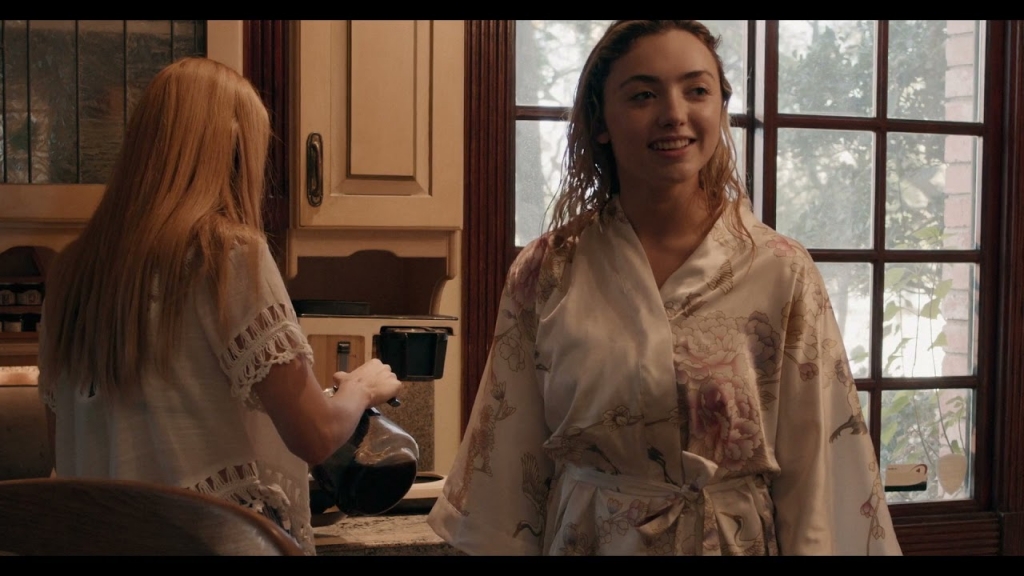 You cannot help but feel that if things would have gone just a little bit more in her favor that her entire story could have turned out the opposite of what it did; that lives could have been saved, and good may have prevailed.

Alas, the viewer is dragged kicking and screaming through the painful process of watching someone who has less than nothing suddenly have it all only to squander everything through a combination of selfishness, greed, and a survival instinct she should never have had to develop at such a young age — which evolved into a frightening ruthlessness that Peyton List portrays with uncanny nuance.

Roberto Correa’s cinematography and Robert Brecko’s production design (not to mention superior costume design from Susan Doepner-Senac) work together flawlessly to bring the viewer back to high society Florida of the 1970s.

And Steve Moore’s (VFW, The Guest) score is yet another triumph from the award-winning composer.

And in this writer’s opinion, the makeup department deserves some kind of award for turning the gorgeous Ashley Atwood (who played the older Wuornos) into the hideous serial killer during her prison flash-forward scenes; I honestly thought they did at least as well as the crew from 2003’s Monster (oh, look, it did get mentioned in this review after all; that elephant in the room is a proverbial apple to Boogeywoman’s orange), if not better.

There is a wonderful animated sequence during the opening credits (don’t you wish there were more of those?) which looks and feels like it came right out of 1976, and the rock & roll soundtrack, including that classic Nazareth ballad “Love Hurts” is perfect for the period piece and gives you a new appreciation for just how stirring ‘70s rock could be.

All in all, Farrands has put together a worthy addition to his growing list of fictionalized versions of true crime stories, and it is definitely worth a watch for anyone who wants to think a little deeper about the fact that throwing money and opportunity at broken people does not change their character.

If anything, it draws out their true character, sometimes to an utterly horrifying effect.