Despite impressive special effects and a lighthearted premise, Attack of the Lederhosen Zombies struggles to live up to its fun title 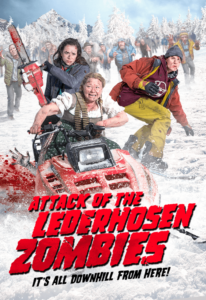 Austrian writer and director Dominik Hartl has his zombified heart in the right place with his latest film, an alpine horror-adventure tale titled Attack of the Lederhosen Zombies. The movie opens with an impressive exposition that effectively mingles comedy and horror, as shady businessman Franz (Karl Fischer) attempts to market his snow-making machine to a wary investor, all while standing among the beautiful snow-capped Alps.

However, much like the toxic gas that gets accidentally released in The Return of the Living Dead (1985), Franz’s experiment goes terribly wrong, spraying some ghastly green chemical onto the investor and turning a nearby mountainside resort into a killing ground of flesh-eating mutants.

At this point in the story, Attack of the Lederhosen Zombies looks promising, with gory special effects, mild humor, and fast-paced action. Unfortunately, as other characters are introduced into the narrative and various personal conflicts arise, the film has trouble maintaining its momentum. The plot quickly shifts into predictable territory, offering very little that’s new to the genre.

Comedy-horror films such as Shaun of the Dead (2004) and The Return of the Living Dead succeeded not only because of their killer special effects, but also because of their taut scripts, character development, and strong performances from actors who have honed their craft. While Hartl’s film features some gory sequences and plenty of blood splatter, the characters (and the overall plot) are so thinly drawn that audiences hold little stake in the unfolding drama.

Laurie Calvert stars as Steve, a snowboarding superstar who finds himself stranded at the resort with his angry girlfriend (Gabriela Marcinková) and their mutual friend. As zombies begin to take over the raucous tavern inside the resort, the property’s owner, Rita (Margarete Tiesel) joins the group in their battle to survive. Throughout the picture, Rita remains the stand-out as a feisty and sarcastic heroine who remains determined to live amidst the mayhem. Unfortunately, the other characters, including the film’s generic protagonist, do little to get the audience engaged in the action.

Clocking in at a lean 78 minutes, ‘Attack of the Lederhosen Zombies’ includes a handful of fun scenes and zombie characters (including a mutant deer that is more interesting to watch than its human counterparts), and the makeup effects are gruesome and expertly done. The cinematography (by Xiaosu Han and Andreas Thalhammer) captures the scenic mountainside and the brightly-lit tavern well. But the climax of the film is half-hearted and surprisingly dull, reminding this writer of some of the corny ski flicks of the 1980s, like ‘Hot Dog The Movie’ (1984) or ‘Better off Dead’ (1985). Steve and his small gang of survivors must use their athletic skills to fend off the increasing hordes, and the end result is sadly uninspired.

Overall, the film’s brevity works to its advantage, and the unique environment and special effects make Attack of the Lederhosen Zombies worth a rainy afternoon’s watch. While its predecessors—including 2009’s Dead Snow—tackled similar subject matter in far more successful ways, Dominik Hartl’s movie may appeal to those looking for a little humor with their zombie carnage.