Cult classic “Thankskilling” and its distasteful sequel may satisfy your weird horror cravings this Thanksgiving — or at least you off your turkey. 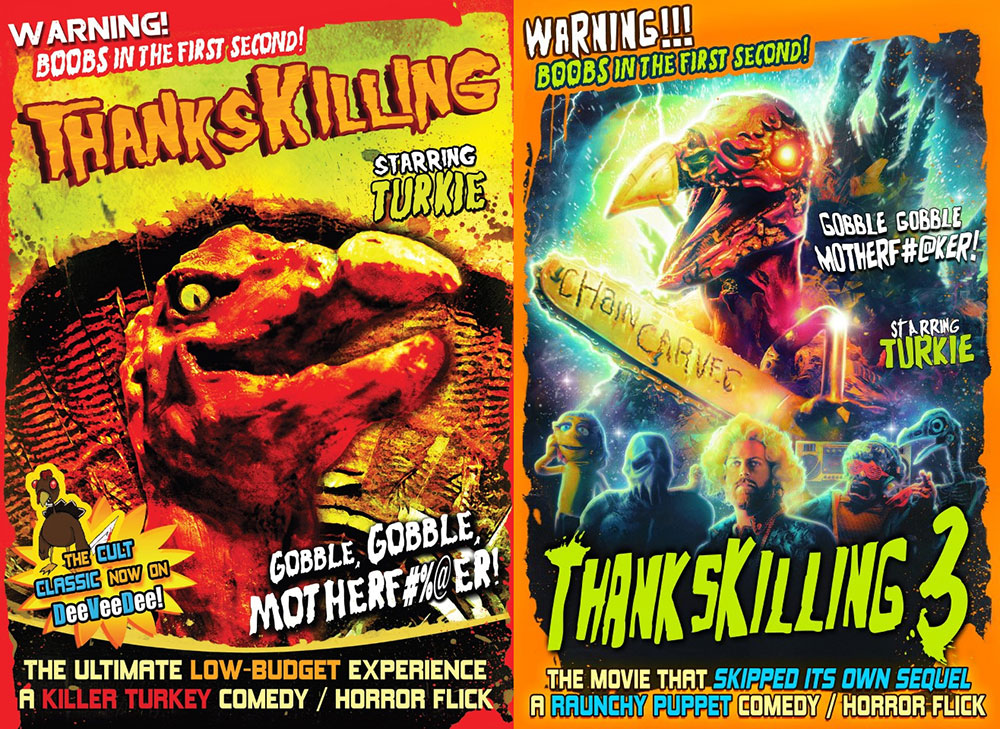 While we are all still waiting for the Thanksgiving horror film Eli Roth teased in 2007’s Grindhouse, we do what we have to do to get in our turkey-time terror. 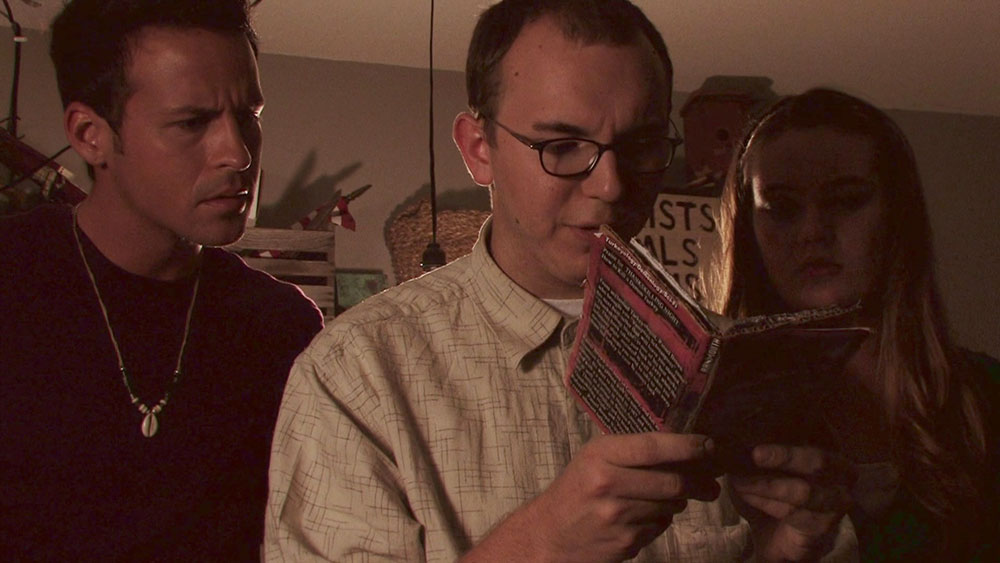 We have five of the typical archetypes for teen horror films: Johnny the jock (Lance Predmore), Kristen the good girl (Lindsey Anderson), Billy the redneck (Aaron Ringhiser-Carlson), Ali the ditzy girl (Natasha Cordova), and Darren the nerd (Ryan E. Francis). After stopping to camp on the way home (yes, in New England…in November…in short sleeves…in New England…in November…), Darren tells the story of a Native American shaman who was dishonored by a pilgrim (who just happens to be an ancestor of Billy).

The shaman created an evil turkey that will appear every 505 years to kill as many white people as possible.

While this is going on, a hermit (guitarist General Bastard) is hunting in the woods with his dog. The dog pees on a totem and it releases Turkie, who also gets peed on. Turkie takes out the dog and escapes the hermit who vows to avenge his beloved pet. The turkey soon comes after Kristen, who escapes, but for some reason, none of her friends believe she was attacked by a talking turkey. 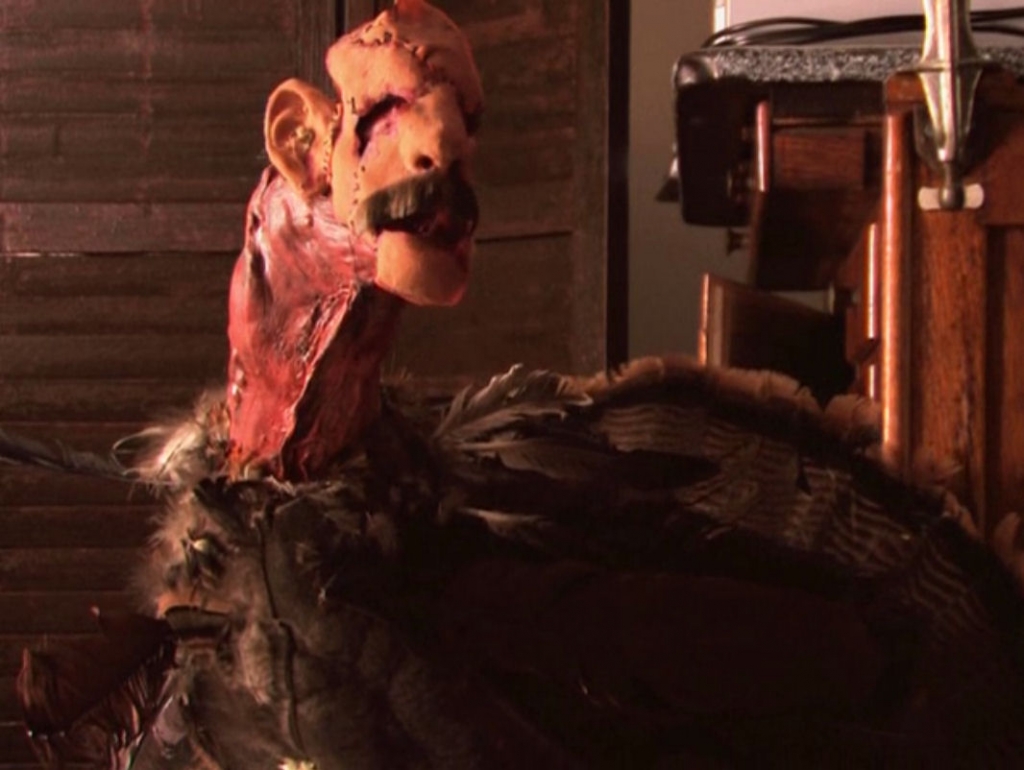 Arriving home, they go their separate ways to celebrate the holiday, only to be pulled back together to fight off Turkie. Along the way, we get Turkie doing an homage to Leatherface to fool our college co-eds and many one-liners like “Gobble, gobble, Mother-fucker!”

Are you still with me? There is no way to do justice to this movie. On paper, it shouldn’t work. The script is the most basic slasher fare (with a turkey puppet for the killer). The acting is terrible. (So bad, yet so, so perfect). The movie is full of cliches and continuity errors. But at its very worst, with all of its many, many, flaws, the movie rises above them and becomes the very epitome of the movie so bad, it’s brilliant.

For all of Thankskilling‘s wonderfulness though, it unfortunately doesn’t transfer to its 2012 sequel, Thankskilling 3 (yes, while there is no Thankskilling 2 that you can watch, it’s the central plot point of the sequel). 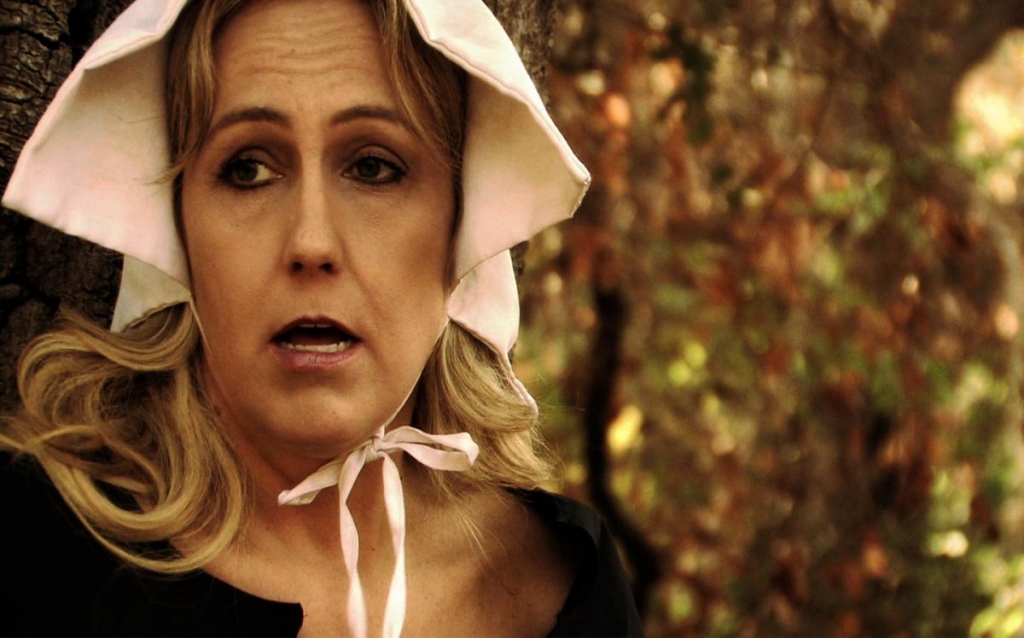 At the end of Thankskilling, we are informed that the movie is “To be continued…in space”. Somewhere along the way this movie was made as Thankskilling 2, which we get just a taste of at the beginning as Wanda Lust returns to once again show off her…ummm…assets as a topless astronaut (who is taken out by a spaceship flying Turkie).

I think I would rather watch that movie than the clusterfuck that is Thankskilling 3. Going meta, the filmmakers set this film in a world where Turkie has a family and is so upset that his film Thankskilling 2 isn’t going to be released because it’s the been seen as the worst movie ever made, that it sets him on a murderous rampage to find the one remaining copy.

Along the way, we get to meet Yomie, a puppet of undetermined origin, a Thanksgiving loving salesman whose dream is creating Thanksgiving themed amusement park, a rapping granny, a robot, and an earthworm from space. (Read that again…I’ll wait). 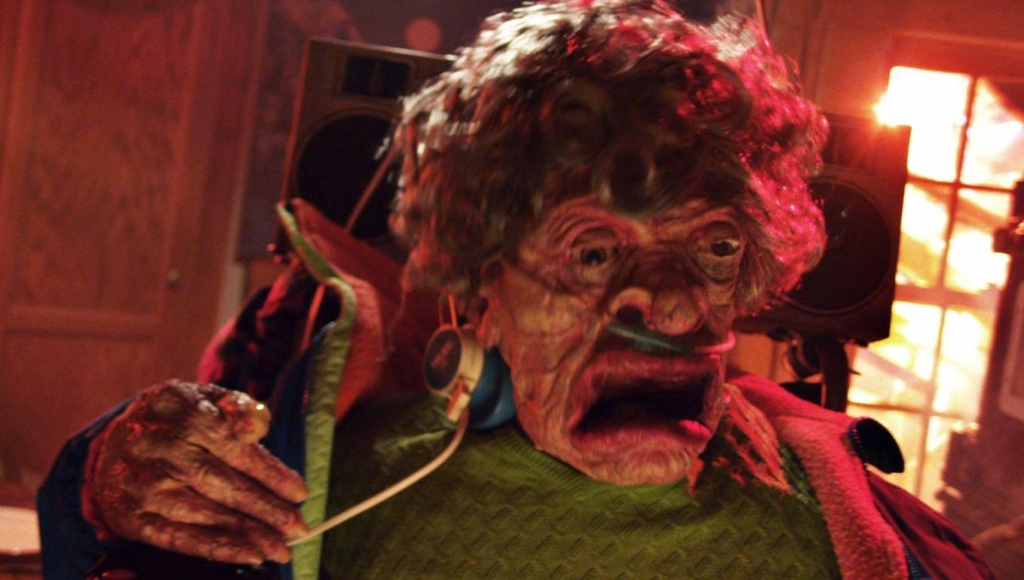 So basically, imagine a fucked up Muppet movie with references from everything from “The Lord of the Rings” to “Evil Dead” that has no coherent plot or purpose, and you might scrape the surface of Thankskilling 3. While it has a few funny moments, most of the movie is just a mess. The one highlight is Turkie doing his best Ash impersonation and substituting a chainsaw for his missing…johnson with a very Ash-like “Gravy!”.

The filmmakers used Kickstarter to raise more money for this sequel, but it’s an example of more money not equalling a better movie on a micro-scale. Overall, it’s just a disappointing mess.

So as you’re filling up your plate this Thanksgiving, give Thankskilling a try, but I don’t recommend going back for a second helping of Thankskilling 3. However, if you have the appetite, both films are now available to stream for free on Amazon Prime.