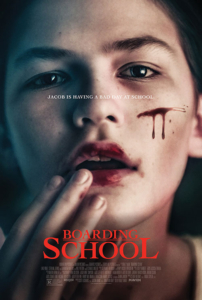 Momentum Pictures has released the trailer for a wonderfully dark and creepy film titled Boarding School. I just got a chance to screen the film, and I adored it. No reviews are allowed until the release date in August, so all I can say it that it is worth waiting for!

The horror/psychological thriller is written and directed by Boaz Yakin (Remember the Titans, Uptown Girls, Safe, Max) and is a unique take on the evil boarding school story.

Luke Prael stars as Jacob, a 12-year-old boy, who is fascinated with his dead grandmother — to the point of trying on her clothes — and is sent away to boarding school for misfit kids by his step-father. Here he discovers who he really is and what the headmaster of the school has in store for them all.

When troubled 12-year-old Jacob Felsen is sent away to boarding school, he enters every kid’s worst nightmare: A creepy old mansion, deserted except for six other teenage misfits and two menacing and mysterious teachers. As events become increasingly horrific, Jacob must conquer his fears to find the strength to survive.

Enjoy the trailer below…and look for the film to be released on August 31st. Also, be sure to stay tuned for my full review, as well as interviews with the lead actor and writer/director.