A slow-paced slasher with memorable kills and a predictable but solid twist ending, “Night School” is not what it promises to be. 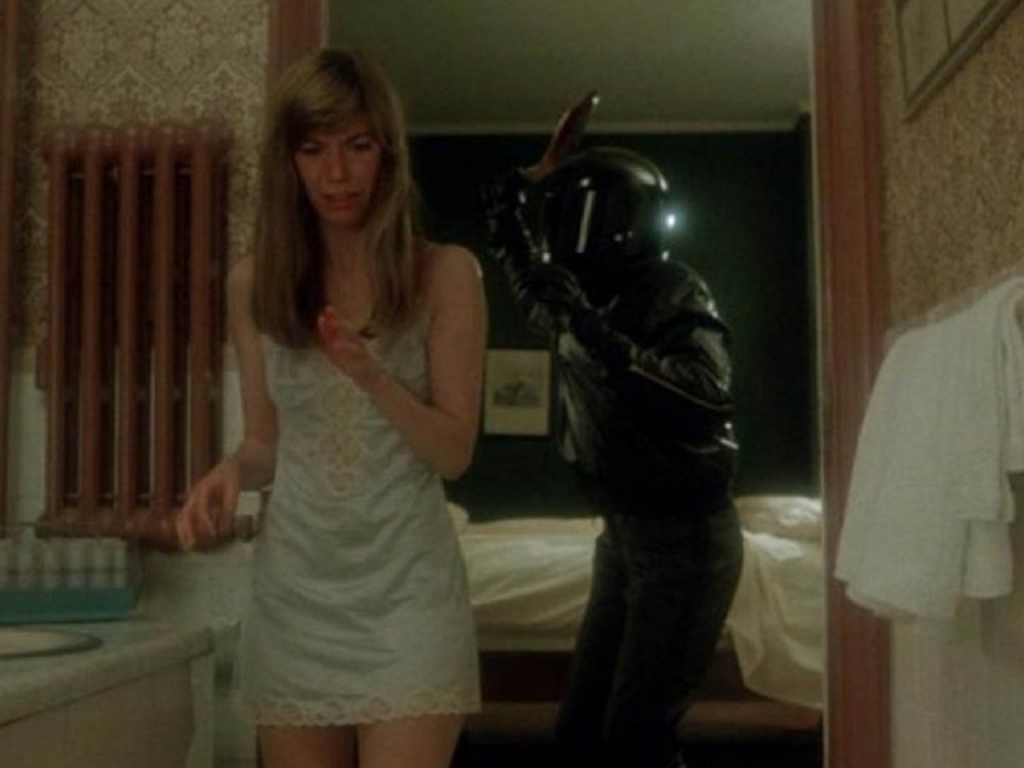 The opening sets a heightened expectation for a bloody night. Unfortunately, the roundabout decapitation was the high-water mark.

There are quite a few eighties horror movies that have their killers wearing blacked-out motorcycle helmets. Nightmare Beach (1989) and The Nail Gun Massacre (1985) come to mind. And already that seems like enough to dub it a lazy and budget-saving tactic. In an era with such amazing effects work and creature creation, the slick, ‘black leather and black helmet’ look reigns as the supreme cheese (pejorative).

The killer has a very distinct way of killing: cutting off the heads of young college women with a Guhrka blade.

Though the kills scenes are worthy of the golden age of slasher flicks, the story languishes from the opening until the twist ending. It’s possible those two scenes were the seed the story grew out of and they weren’t sure how to fill in the rest. Though I must say, it’s shot well and economically. Perfect angles for tension while the killer stalks its prey.

The surprise comedic ending is out of place in an otherwise straight flick, but maybe it was their way of lightening the mood at the end of a brutal campaign.

Mostly recognizable from bit parts in other films, the cast doesn’t hold much “star power”.

Drew Snyder (Professor Millett) had roles in Stephen King’s Firestarter (which was almost directed by John Carpenter), alongside Arnold in Commando, and in the Van Damme vehicle Universal Soldier.

The shower scene was used for a cheap and empty scare, as many are post-Hitchcock. It turned into an odd sex scene with the Professor rubbing some red paste on Eleanor just to simulate bloody water. Elizabeth Barnitz (Kim Morrison), who plays the aspiring marine biologist who meets an unfortunate fate, is a little bit Juliette Lewis, a little bit Jennifer Lawrence. She’s not afforded much in the way of screen time or dialogue but is able to convey emotion efficiently before her untimely demise.

A continuation perhaps could be in order, picking up the story forty years on with the offspring of the torrid affair coming back to avenge their fallen parent, though you would have to be a big fan of this mediocre slasher to want to slash your way into such a project.

No progeny to report, though we never did hear what came of Eleanor’s baby!

Warner Bros. Archive released a Blu-ray in 2017. You can also rent it for a nominal price on Apple TV, Amazon, Google Play, and YouTube.