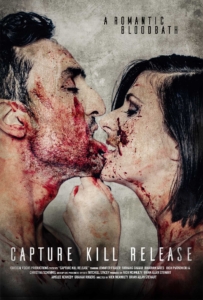 Capture Kill Release is a movie that has me on the fence. Do I like it, or do I absolutely hate it? It recently won Best Horror Feature at Shriekfest in LA, but that isn’t influencing me. It just gives me an idea of what the festival voters thought, and I do think this is a very well done movie — one that deserves to win awards.

Now, I don’t dislike movies because they are too gory. If you know anything about me, you know I am a gore fiend most of the time. I don’t necessarily hate found footage films either. Although I must admit, I am tired of them overall, and they make me dizzy to watch. But again, why am I so unsure of my feelings on this one?

Let’s look at the movie. Written by Nick McAnulty and directed by Nick and co-director Brian Allen Stewart, Capture Kill Release is about a couple that looks like your normal next door neighbors. But what we don’t know at first is that they are plotting to kill a random stranger, just for fun, to see what it feels like. It’s an interesting plot device since we don’t usually see such “normal” folks out to kill for no reason. 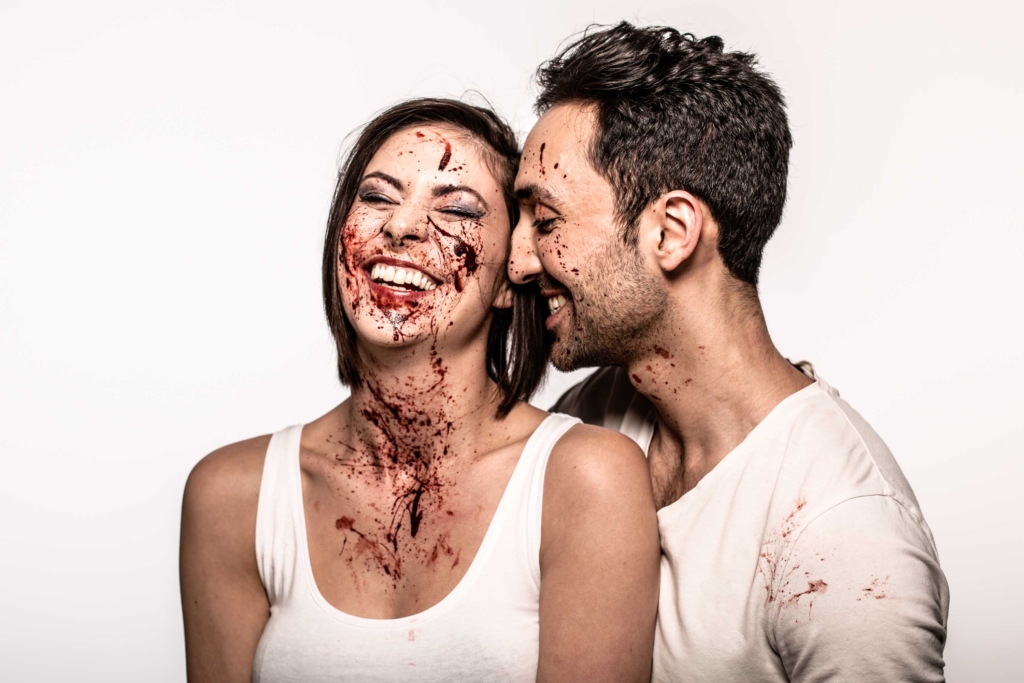 What we end up with is a POV documentary of how to commit a murder and ruin your marriage in just a few easy steps.

Filmed by our young couple, who turn out to be aspiring serial killers, Jenn and Farhang (Jennifer Fraser and Farhang Ghajar) film each step in the meticulous process of getting ready for their first victim, the results of the plan, and we also get some old family footage added in to help us understand (I believe) more about Jenn.

As Capture Kill Release begins we see a couple that is unified, both parties seeming to have the same goals (and the same amount of naivety about getting caught by the police). But the farther into the movie you go, the more you start understanding that Farhang is codependent on his wife and just a pawn in her sociopathic plan. As she becomes crueler and more demanding of him, we see him backing down. At this point he could have been a sympathetic character, except that you start feeling ashamed of his behavior and want him to stand up for himself. 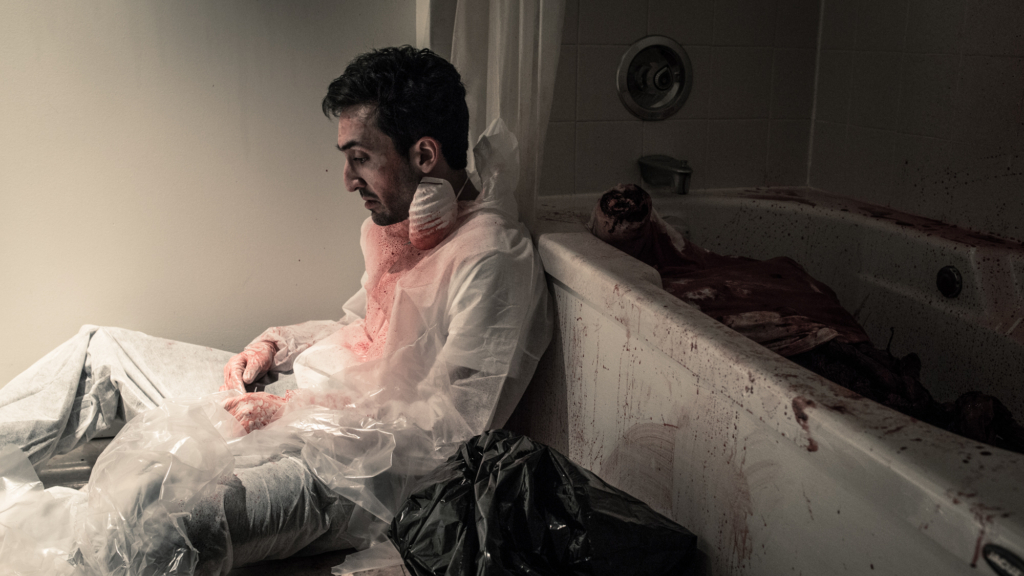 So, let’s talk about the movie itself rather than the story. The SFX were great, with lots of gore and blood for the ones like me that love it. Kudos to Mitchell Stacey! The directing was very strong because it didn’t feel directed, it felt true and real. I totally loved the acting. I think that’s the biggest reason that I am having trouble hating the movie. Even though the story is a distasteful and ugly look into an evil person’s soul, the acting is what sells it.

In this case, the POV aspect also works. Seeing the characters talking in an everyday way — even though they are talking about horrible things — is compelling, and I got caught up in it. It’s like a dark reality show, if you will. Jennifer Fraser as Jenn was terrific. She brought life to a character that I really disliked. Fraser did a great job showing us the dark, inhuman person Jenn is, even though on the outside she is your nice, girl next door. Fraser took us inside the real Jenn and revealed that she is manipulative and good at getting what she wants. Even though I don’t want to murder anyone, I had to applaud Jenn’s audacity at just doing whatever she wanted to fulfill her end game. 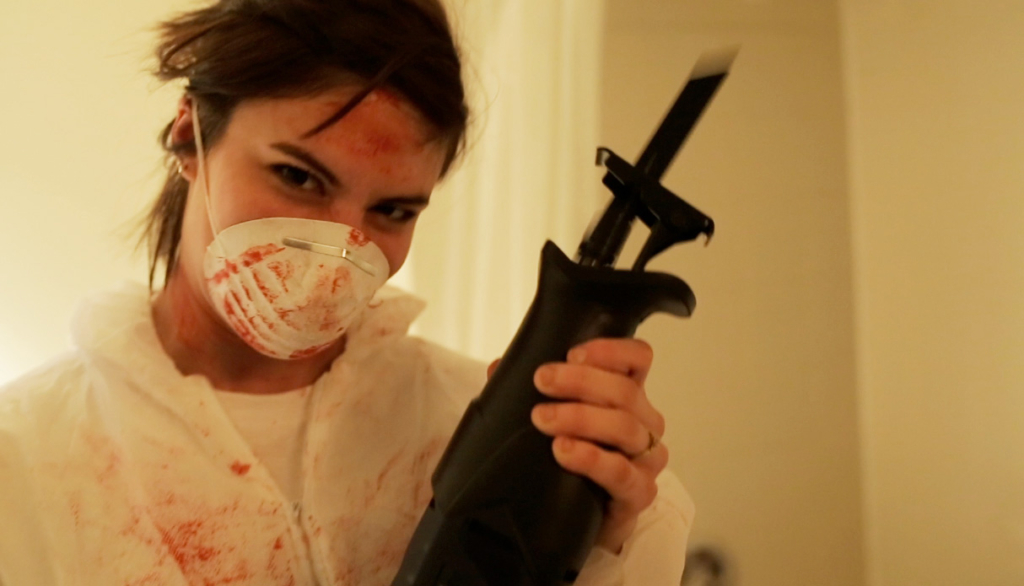 The acting by our other lead character (I hate to use the word protagonist, because there is no good in either person) Farhang, is just as well acted; he is completely as dislikable as his wife, but in a totally different way. He is powerless, pathetic and lets Jenn completely rule and manipulate his life. Farhang needs to be stronger when Jenn disregards his feelings, and Ghajar sells us on his character’s fear, weakness and confusion as he starts to change his mind about the murder…and about his wife.

The other main character to mention is Gary, the homeless guy. (Jonathan Gates) Gates did an excellent job too. The interactions between Gary and Jenn throughout the film just make the outcome sadder and more brutal. He gets the worst of Jenn’s psychopathic behavior. Jon did a terrific job making us like Gary, which makes it more devastating to see what happens later.

So, if I like the acting, the story and the SFX, what’s the problem? 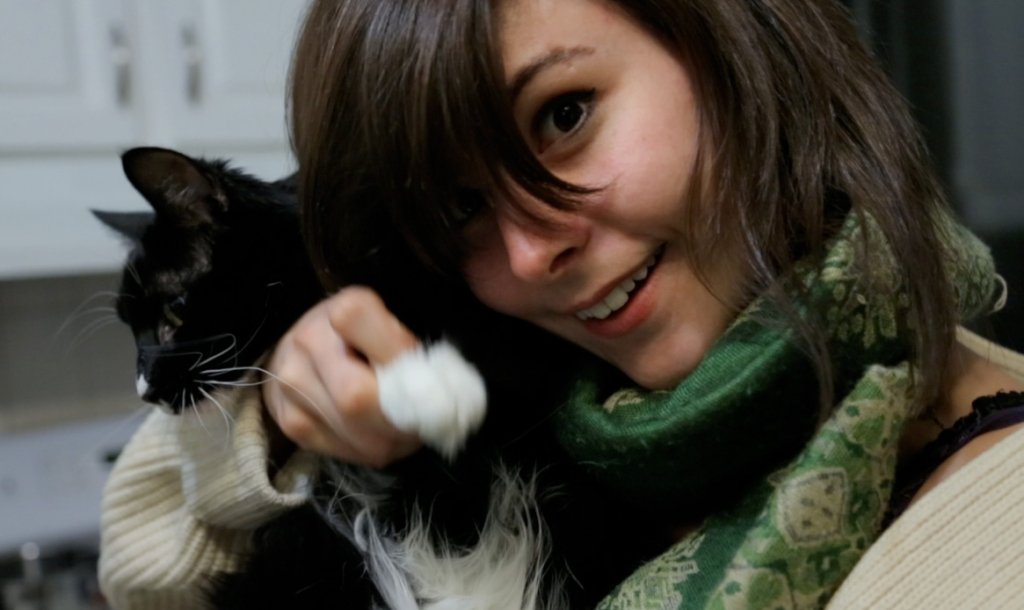 Problem one: There is a point that the movie comes to a perfect ending. However, the movie goes on. It’s not a bad continuing story at all, pretty great actually, but my thought would have been to make it a sequel of some sort. Problem two: The cat. As an animal lover, it was hard to see what Jenn does to the cat. Even for me. No animals were harmed obviously, but I think animal lovers will have a problem with that one scene. So, here lies my main dilemma, my one big question never got answered during the entire movie. Final problem: Why? Why do they feel the need to kill? As Jenn says, “It can really be anybody, equal murder opportunity for everyone”. At this point we see this is not about revenge or hate, they just want to kill a human being. Capture Kill Release never addresses the why.

Capture Kill Release is a disturbed, emotional, dark film…and I guess I really dug it after all.

I would like to understand why they did what they did, but I don’t have to, to be able to like the film. I love gore, and this movie really delivers on that. The movie is continuing its journey on the Film Festival circuits, so I suggest going to their social media links to find out more.