This week, good taste and levelheaded filmmaking do not exist at the Cine-files, as I take on The Mad Foxes and Lifeforce.

Share in my shame as I reflect on The Mad Foxes, and revel gleefully with me as I try to make sense of Lifeforce. 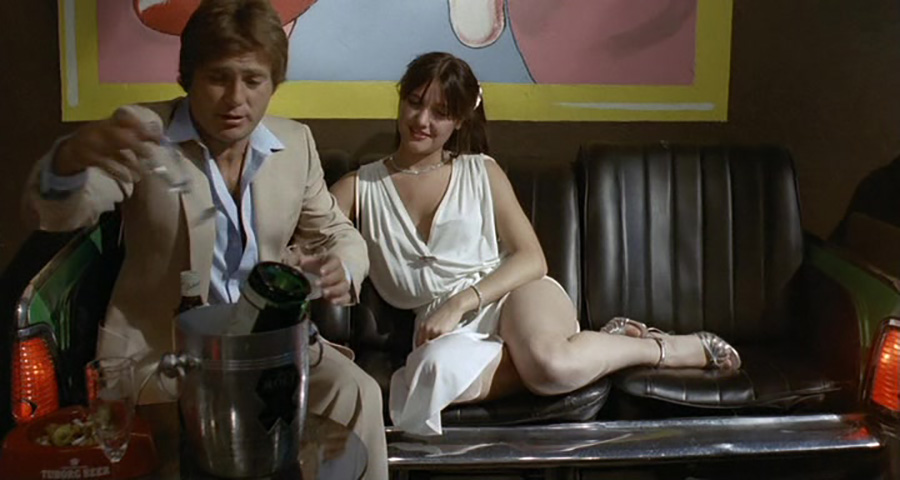 This one is a ruthless challenge to my philosophy that all film is art, but I’ll still defend it as such. One of the most tasteless and clueless exploitation films I have ever seen (even moreso than Jess Franco and Joe D’amato), The Mad Foxes revels in every form of offensive subject matter it can fit into its 80 minute running time. This all must be taken with a grain of sand, however, because of how bizarre and harmless its intentions are. And how seriously can you take something executive produced by Paul E. Woodhard?

It starts off with a rocker by Krokus and our middle-aged hero, Hal, driving down the highway in his hot sports car. He has his girlfriend with him, and they’re going to paint the town red in celebration of her 18th birthday. The opening is padded with uncomfortable dance numbers filmed in the club they’re celebrating in, and everybody greets and toasts to the freshly legal lass in the most atrocious English dubbing track I have ever had the pleasure of hearing. It doesn’t match up in the slightest to what they’re saying in the original language (Spanish).

The happy couple leave the club, anticipating an evening of debauchery (he opens the car door for her and says “my dear princess, I offer you my royal stingray”). Suddenly they are attacked by a group of filthy and sleazy Nazi bikers, with the leader dressed like he just came home from a formal military march. They beat up Mr. Stingray and rape the girl, delighting in the fact that she is a virgin and that they need to “clear a pathway”. Using her hymen blood, they put a red dot on the end of her nose. Charming, right? 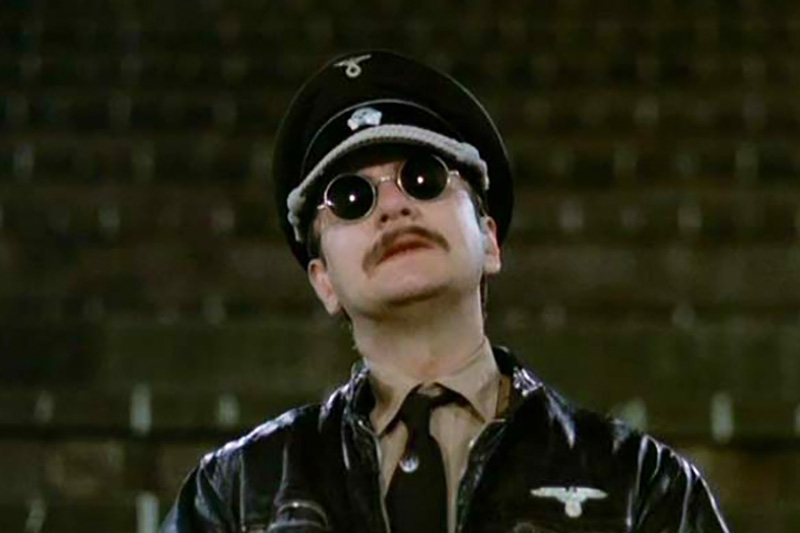 That results in a ruthless game of revenge, by Hal, then by the Nazis, back and forth, several times. I’m ashamed of myself for sitting through this mean-spirited garbage, but what a fun and memorable experience.

The misogyny is off the charts: a bartender is grabbed, and a man at the bar says not to bother with her because “she doesn’t like to be touched unless she wants it.” One of the many women Hal beds in the movie accompanies him on a hunting trip, but he won’t let her shoot because it’s a “man’s game.”

As a side note, this is a woman who deserts her boyfriend at the beach to hitch a ride with Hal. She explains to Hal that she’s only known her boyfriend for two weeks, so it’s no big deal. 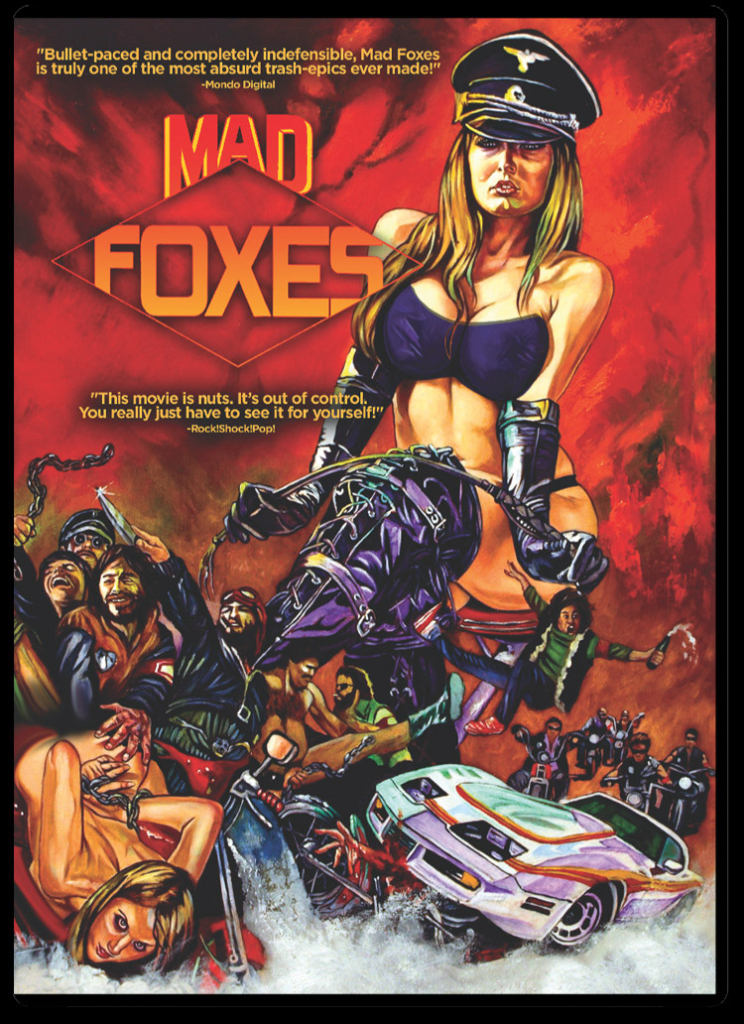 There are castrations, grenades thrown into occupied toilets, eviscerations, an overlong and awkward love scene in a bathtub full of cloudy yellow water, and the ruthless killing of a sweet elderly couple. Hero Hal hunts down the biker gang by going to a nearby gas station and asking where the biker gang’s secret hideout it. The gas attendant gives him specific directions, saying “sure, everybody knows where their secret hideout is.”

If watched in a certain frame of mind, this is an appalling cancerous growth of cinema. But people who don’t take the raunchier side of exploitation films too seriously could really have a blast with it.

I was introduced to it through a Video Nasties documentary, since it is on what is known as the Section 3 list. I don’t know how you could see it at a reasonable price, just to satisfy your curiosity, but beware of the neutered version that is only 73 minutes long. I bought an uncut import Blu-ray for $40. This would be a great title for Vinegar Syndrome or Olive Films to re-release.

“Tobe Hooper, huh? Ok, let’s check it out. Wow, that music is incredible. What is this, Star Wars? The ship is in Haley’s Comet? And it’s 150 miles long? And it looks like an organic umbrella. Cool space scenes. The crew are all giant decayed bats! Hey, there’s three naked people there. Frozen. The frozen girl is . . . wow. She’s naked through the whole thing?

Why would they just blindly take them back to Earth? No, don’t go near her! Holy shit, she sucked out his lifeforce. I get the title now. They’re all sucking the lifeforces out of each other.

Where did she go? Oh, of course, send the government after the intergalactic life-sucking naked chick. Is that Patrick Stewart? He looks exactly like he does today! He’s possessed! He’s kissing that guy! He’s spewing blood from his mouth, nose, eyes, and ears! That blood glob turned into the naked chick! What is this?

Those John Dykstra optical effects look great! Finally, something that connects Hooper to Poltergeist a little bit. I love how the husks of flesh explode.

Yep, here comes the mumbo-jumbo. Why am I getting bored? This shouldn’t bore me. Ok, here we go, everyone in London is a sex-crazed, life-sucking, mutant zombie. And that naked chick is covered now. Fucking ripoff.

Cool, she’s absorbing all the souls in London and channeling them up to her space umbrella! Oop, she’s naked again. Sure, she has to mate with a guy who is “the one.” There’s always a “one.” But those Dykstra effects are a mind-blower. Holy shit, a giant bat monster! On a pile of corpses, on the steps of the giant cathedral-turned-alien-skybeam. This is crazy!”

These are just a few of the things you may find yourself saying while watching LIFEFORCE. It has its own inner-logic, and for a film with such a wild plot, drags in the middle. But it makes up for it at the end. It’s a fun and twisted little chapter in the book of sci-fi horror cinema. Cannon Films changed the name from “The Space Vampires” to LIFEFORCE, because “The Space Vampires” (the book it’s based on) sounded too silly. I recommend you see it. It should be very easy to track down.