Cine-Files: “All Hallows’ Eve”, “The Church”

Meet Art the Clown for the first time in Damien Leone’s All Hallows’ Eve and check out the near perfect film from Michele Soavi, The Church.

Ready for some must see horror? This week brings two terrifying tales: The wonderfully gory birth of a new slasher icon and a brilliant supernatural tale from the 80s that receives my highest recommendation. 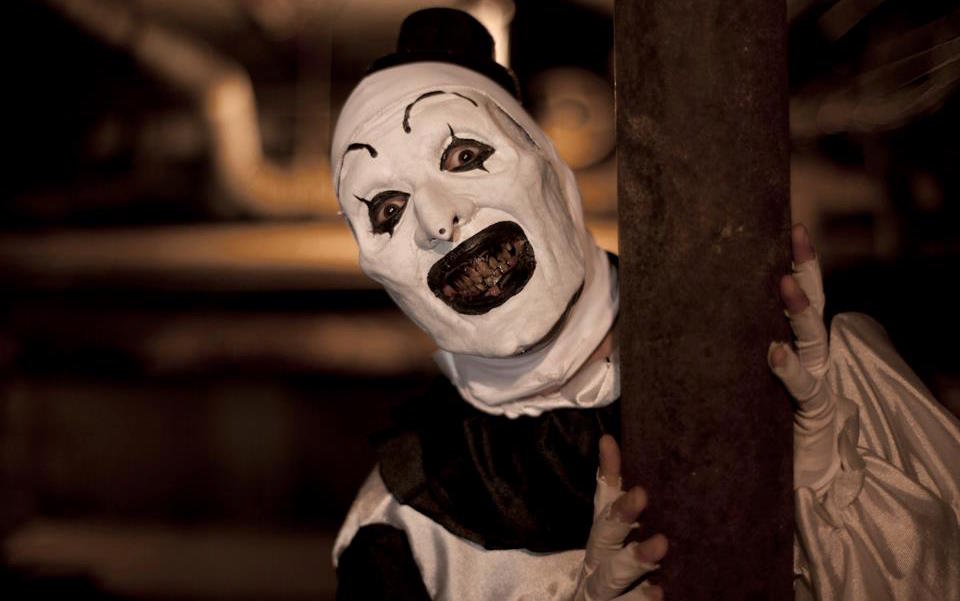 Remember a few weeks ago when I was less than kind to a movie called Wrestlemaniac?  Well, this is a sweetly unforgiving little movie called All Hallows’ Eve, which was produced by the same filmmaker (Jesse Baget).  He only the producer for this, however, and it shows.

All Hallows’ Eve has blood, guts, tastelessness, and the balls to show it.

It knows how to have fun with horror and not just be goofy and juvenile, like Wrestlemaniac.  And it bursts with color and a really fun premise: on Halloween night, a babysitter watches over a little boy and little girl, and after trick-or-treating, discovers an unlabeled VHS tape was dropped into the boy’s bag.

The boy is boisterously excited about seeing what is on the tape, and the babysitter relents to the begging.  Then we fade into what is actually on the tape, and it’s an anthology of 3 short films, all featuring a killer clown named Art the Clown.  Art’s costume is striped black and white, and he never talks.

The performance, by Mike Giannelli, is threatening, yet nuanced with ticks and physical humor that make him a very entertaining character.  Judging from his movement, I would call him more of a killer mime than a killer clown, which is fine with me.  The concept of a killer mime is a treasure chest of opportunity, which I’m pleased to say is something Leone is vigorously digging into.

Very recently a full-length Art the Clown movie called Terrifier has been released, and it is a very gory and enjoyable treat.

Art steals the show, and his antics in a bus station are especially memorable.  I got the feeling Art is so far gone that if you played along with him, he wouldn’t hurt you.  Lucky for the bloodthirsty viewer, though, that the object of Art’s malarkey in the bus station responds with “get the fuck away from me, you fucking freak.”  What was she thinking?  Calling a psycho killer mime in a horror movie a freak is a death sentence.  In this case, it’s even more than just a death sentence.

All three segments are a lot of fun, and the wraparound babysitter story serves as much more than just bookends.  I recommend this without reservation.  Gore, a few chuckles, a squeaky horn, and the worst c section ever await you.

The Church (1989, directed by Michele Soavi) 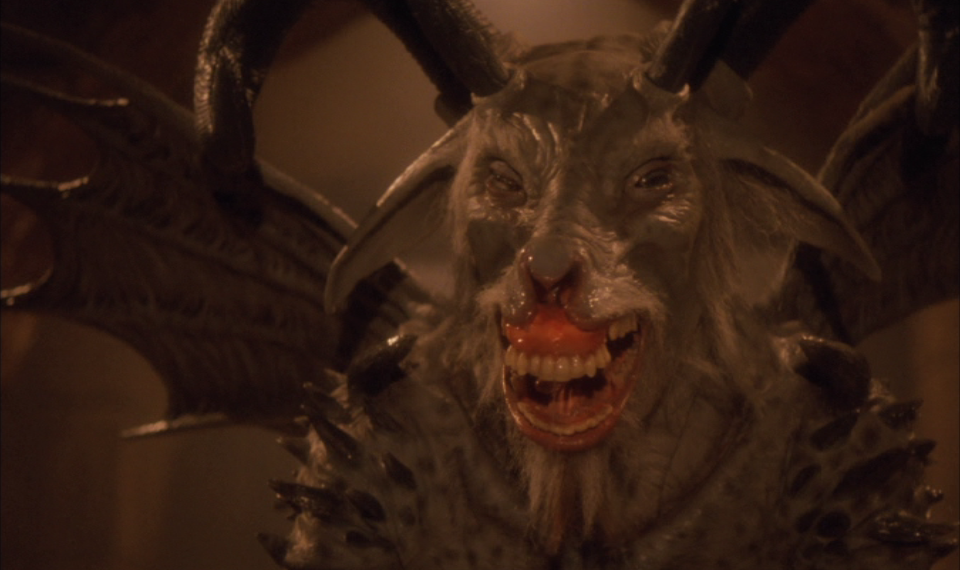 I give a lot of good reviews here.  But it isn’t to ingratiate myself or get free stuff.  I use this column mostly to focus on old releases that have long ago had their time in the limelight, and are now being re-released, or are still just banished to dusty libraries and Amazon warehouses.  This brings me to Scorpion Releasing’s new remaster of The Church.

I will state right here and now that I believe The Church is Michele Soavi’s best movie.

Galaxies better than Dellamorte Dellamore (Cemetery Man), the one people seem to love the most.  I doubt that opinion will go over well.  But there is haunting, cursed evil mojo in The Church that isn’t present in any of Soavi’s other films.  It isn’t present in many other films at all.  Period. 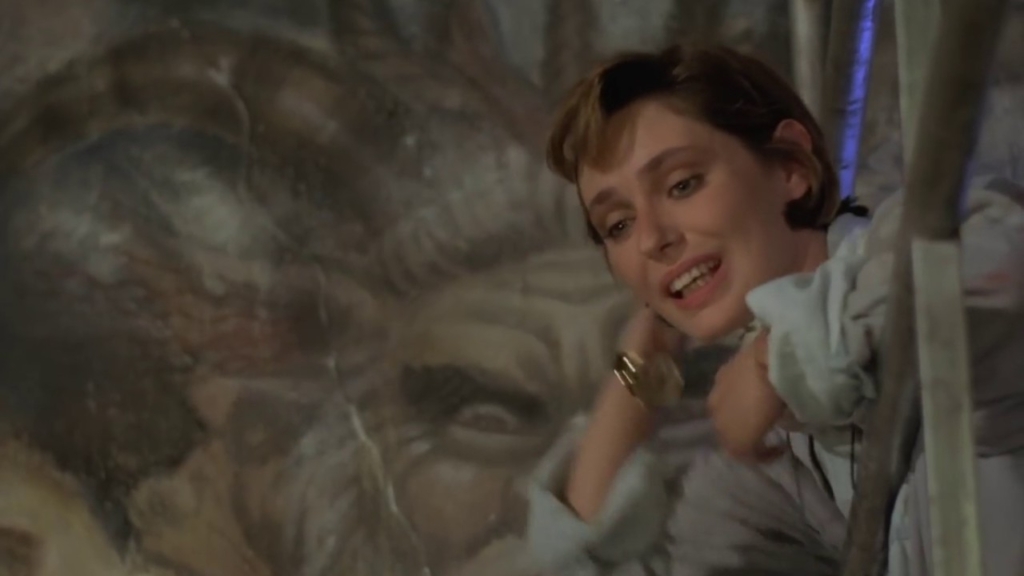 The Church terrifies me.  It makes me hide under blankets.  Seriously, there is an almost fog-like atmosphere that it projects out of the screen.  I’m sure a lot of it has to do with the score, by Keith Emerson (and a little Philip Glass).  Doom-singing organs cast an evil spell on your ears, whispering to you, promising you an hour and forty minutes of relentless bizarre horror, darkness, and dread.*

It starts with the slaughter of an innocent village (or is it?) of witches in Medieval Germany by Teutonic Knights.  The massacre is extremely upsetting.  Religious paranoia at it’s finest.  It isn’t excessively gory or anything, there is just a negative energy of some kind in the actual picture that makes it very disturbing to me.  Some kind of priest asshole in a flat black hat instructs the knights to bury the entire village — some not dead yet — and have a cathedral built over it, in order to contain the evil. 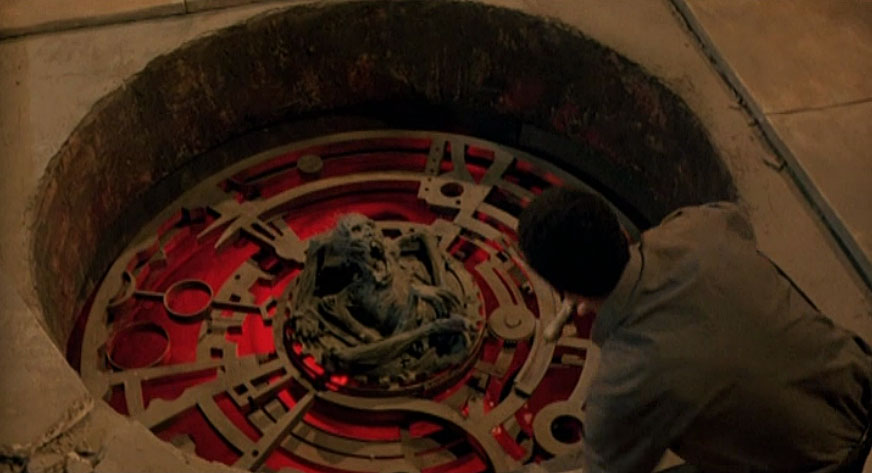 But does it contain the evil?  Haha, hell no.  During a modern-day restoration of interior art and cataloging of church texts, an evil energy breaks free from the witches’ grave and traps everyone inside the church.  The architecture inside the church itself is all hooded statues, rusty gears, and madness.  I’ve never seen anything like it before.

I’m leaving out around 70% of it, but I encourage you to hunt it down and see it for yourself.  It doesn’t matter if you don’t want to spend the money on the Scorpion version, because the old Anchor Bay version is uncut too.  I’m coming through the screen!  I’m thrashing you!  SEE THIS MOVIE!

*I have included a selection from the soundtrack, because it communicates a clear picture of what the atmosphere of the film is.