Not many films can so successfully pull off a madcap mixture of pitch black horror, unpredictable camp, and heartrending bitter sweetness as “Villains”.

Prepare to strap in for one truly wild film that runs the gamut of emotion. You’ll laugh, cringe, and maybe even shed a tear or two when embarking upon this 88 minute whiplash-inducing journey starring Bill Skarsgård, Maika Monroe, Kyra Sedgwick, and Jeffrey Donovan.

Jules and Mickey are arguably the worst criminals in the world. The charmingly inept duo hold up a gas station to obtain the last of the cash they need to make it to Florida and start a life there selling shells to tourists on the sea shore. They’re a young couple, grossly in love with one another, who want a better life together. Their joyous high from a robbery well done ends when the car comes to a sputtering stop on a desolate strip of highway. Mickey forgot to fill up the tank.

The couple find a house not far from where the car has stopped. Much to their luck, the owners of the house are not home at the moment. They break in, hoping to come up with a quick plan to remedy their situation and get them back on the road. While exploring, they discover a little girl chained in the basement. And that is when things start to go downhill for our protagonists.

Jules is insistent that they free the little girl somehow and bring her with them. Mickey soon relents and agrees that they should save her. In their flurry to find something —  anything — they can use to release the child, they don’t notice the homeowners, George and Gloria, have returned. And these two are far more sinister than Jules and Mickey could have ever imagined.

To say much more about the plot of Villains would be a disservice to the viewer and to the film. 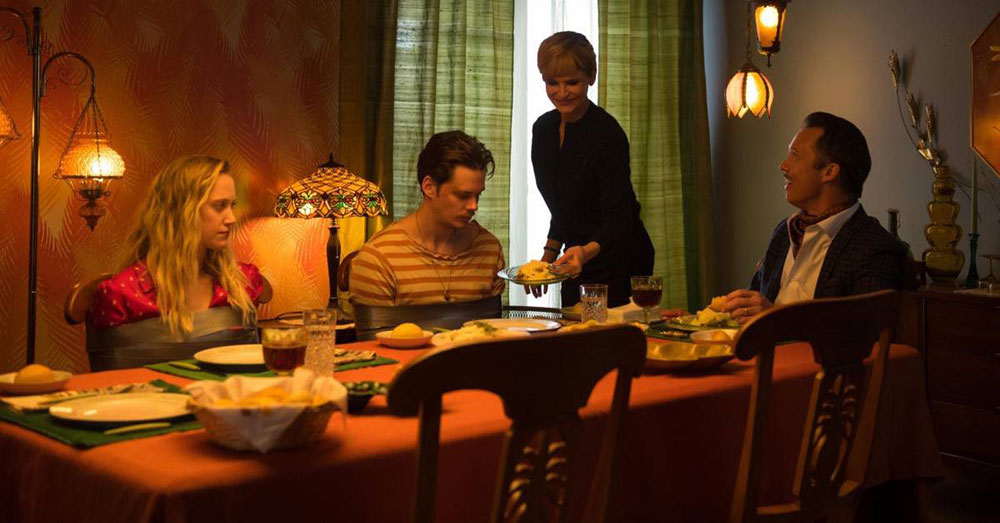 It’s best to go in with the bare essentials of the plot in mind. Knowing anything more could give away the many gleefully deranged plot points that the film contains.

It is safe to say that this is a piece that thrives on the idea of the chaos theory. Anything that can go wrong most certainly does go wrong in Villains — in the most entertaining ways possible. It all plays out in a swirl of wonderfully manic energy.

Villains is a brilliant bit of inspired lunacy on the part of writers/directors Dan Berk and Robert Olsen. It’s a project that had to be tackled with passion and the confidence that it could be pulled off, and Berk and Olsen did just that. The film is a twist on the home invasion thriller, a sub genre that can become woefully stale when approached with a conventional mindset.

Villains is anything but conventional in its execution, and that works in its favor.

It has a vivaciousness that echoes the works David Lynch due to Berk and Olsen’s fearlessness when it comes to going completely off the rails with the film. It wouldn’t be too difficult to imagine this film happening somewhere around the town of Twin Peaks due to its uncompromising bizarreness and over the top antagonists.

Bill Skarsgård (Mickey) is nothing short of a delight in a heavily comedic role. It’s a good change of pace for him as an actor, allowing him to show off just how nuanced his already impressive range is. He exudes an endearingly bumbling charm as Mickey. The character is quite infectious in his optimism for a better life and his unwavering love for Jules. I dearly hope he continues to stick with the horror genre because he is definitely well-suited for it.

As for Maika Monroe (Jules), this is my favorite role of hers and easily surpasses all of her past portrayals. She really steps outside of the box with Jules and stakes her own claim as another emerging staple of the genre. Monroe’s Jules is bubbly and silly, despite having had a difficult start in life. She’s a character that I would say is synonymous with the idea of hope for a better future, and Monroe carries that throughout the film. You can’t not ache for her.

Together, Skarsgård and Monroe have solid chemistry as the utterly lovestruck duo. 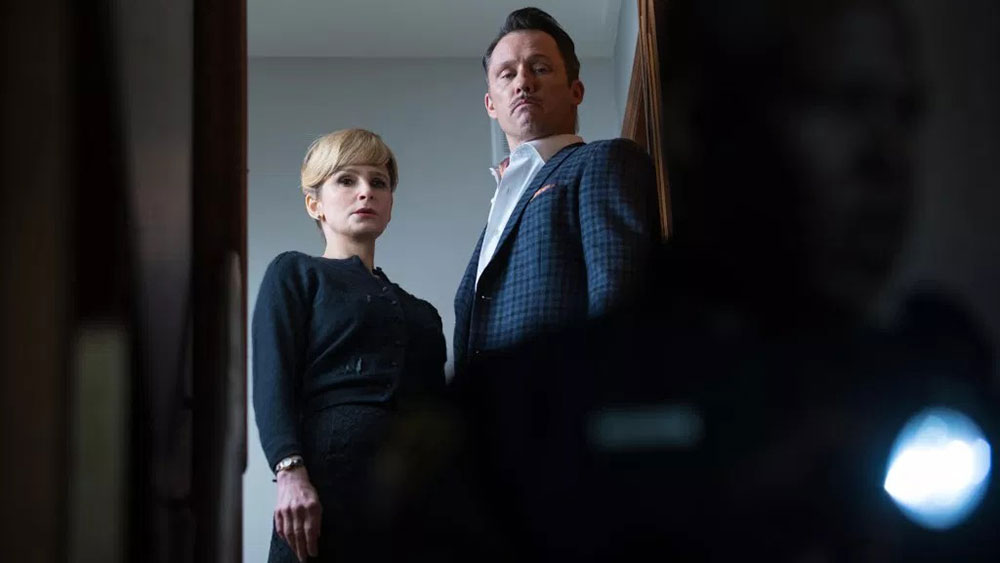 The two surprisingly have a supportive and tender relationship that helps give the film a heartfelt sweetness.

The role of Gloria is quite a departure from anything I have ever seen Kyra Sedgwick do. She’s positively kooky, and you can tell Sedgwick is having the time of her life playing up this campy, deadly retro housewife opposite Jeffrey Donovan as her husband, George. Donovan and Sedgwick are nothing short of twisted, and they lean into the glaring eccentricities of their characters. This makes them seem all the more sinister. They’re simply delightful to watch in all of their terrible glory — providing the film with its eponymous villains.

The behind the scenes work is just as engaging as the work on screen.

Production designer Annie Simeone and set decorator Lisa Green have outdone themselves with creating the vintage-inspired abode of Gloria and George. Simeone, Greene, and the art department as a whole definitely deserve lots of praise for their colorful and eye catching work that adds to the world that Berk and Olsen have employed them to embellish.

Cinematographer Matt Mitchell creates some truly memorable visuals. One shot during the film’s resolution is among one of my favorite pieces of cinematography of the year so far. Other highlights include Sofi Marshall’s slick editing and Andrew Hewitt’s tense and bouncy score.

There is so much to love about this movie on all fronts whether it be technically, aesthetically, or creatively.

I adored VILLAINS from its hilarious opening scene to its sweetly sad ending, and I cannot wait for people to discover it. This movie is a darkly funny gem that will secure its well-earned place as a cult indie favorite.  I look forward to what Berk and Olsen have in store for us all in the future and will eagerly await their next absurd and enticing offering.

Villains  made its Midwest premiere at Cinepocalypse 2019.