We celebrate Christmas by looking back at the iconic holiday horror movie that incited parent protests, earned a cult following, and spawned a franchise. 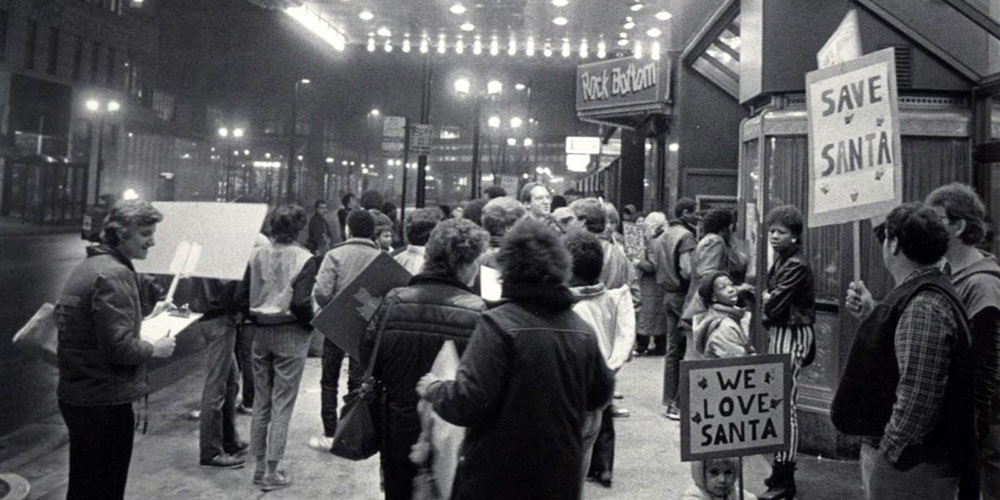 Directed by Charles E. Sellier Jr., Silent Night, Deadly Night (1984) begins with a young Billy Chapman (Danny Wagner) who witnesses his parents being murdered by a thief dressed as Santa. Billy spends his youth in an orphanage where he is routinely abused by the mother superior (Lilyan Chauvin). As a teenager, Billy (Robert Brian Wilson) gets a job in a toy store. He finally snaps when he is asked to fill in as Santa, sending him on a killing spree throughout his town.

Silent Night, Deadly Night has gone down in horror history as one of the most controversial holiday horror films, due mostly to its advertising campaign. It’s fairly common knowledge among horror fans that the posters and the TV spots heavily featuring the killer dressed as Santa wielding an ax caused parents to protest the film being shown in theaters. 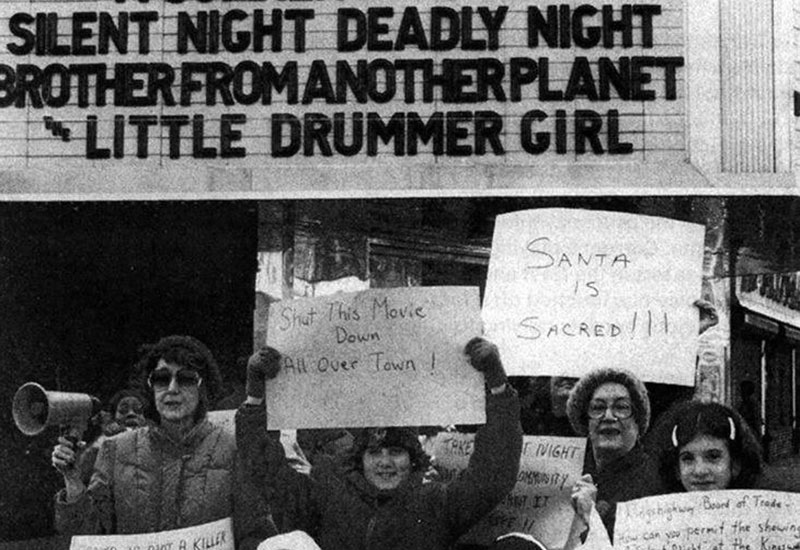 Angry families gathered at theaters and malls to protest the movie — going as far as to picket the film’s east coast premiere in New York City, singing Christmas carols, no less.

Silent Night, Deadly Night was far from the first Christmas-themed horror movie – coming well after such holiday horror classics as Silent Night, Bloody Night (1972), Black Christmas (1974), and Christmas Evil (1980), just to name a few. So what made this twisted take on Christmas so controversial?

The biggest cause of the festive firestorm surrounding Silent Night, Deadly Night was the trailer for the film.

It shockingly juxtaposed the popular Christmas poem “Twas the Night Before Christmas” with images of Santa axing down a door, pulling a gun out of his pocket, and making people scream in fear.

If that wasn’t enough to incite outrage among parents, this trailer was aired on daytime TV over the weekend, a time when children were mostly likely to see the ad. The film’s original distributor, TriStar Pictures, pulled the ads for the film just six days after its release — and the movie was pulled entirely from theaters not long after.

Despite the negative publicity – or, perhaps, because of it – Silent Night, Deadly Night didn’t do too terribly bad on its opening weekend, grossing $1.4 million in less than 400 theaters. 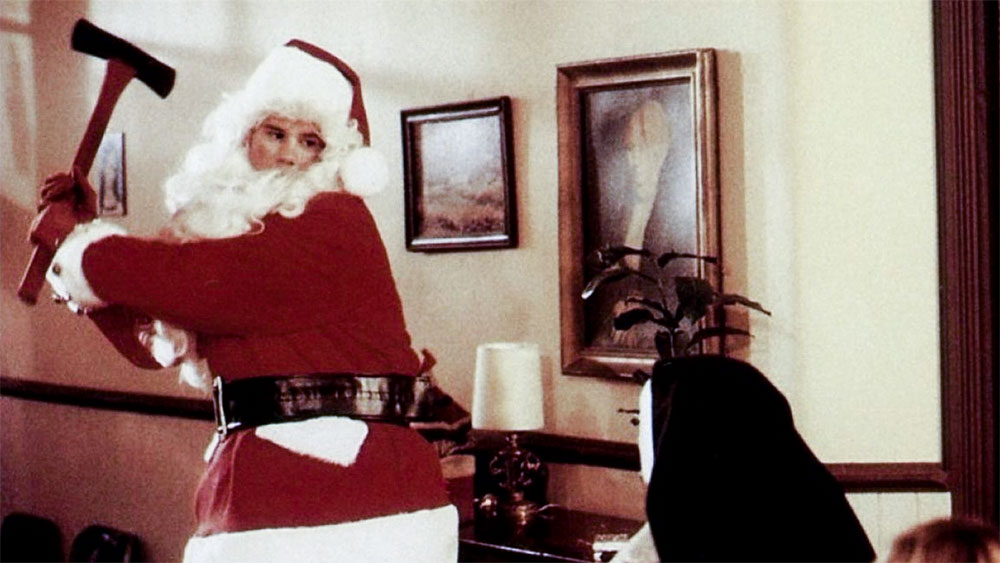 Unsurprisingly, film critics Siskel and Ebert hated the movie and attacked not only the content of the film, but the advertising campaign, as well, calling the ads “sick, and sleazy, and mean-spirited.” Siskel even called out the filmmakers saying, “You people have nothing to be proud of, even if you made a few bucks off of all the negative publicity. Your profits are truly blood money.”

And if that wasn’t bad enough, Siskel made it a point to also name-drop the film’s distributor: “Tri-Star Pictures, co-owned by Columbia Pictures, CBS, and Home Box Office. Shame on you.”

Ouch! Following this critic tear-down, the film’s second weekend made only about half of what it did on opening weekend, and it was pulled from theaters after only two weekends.

Silent Night, Deadly Night had a much more successful video release in 1986, where the film finally found its audience. 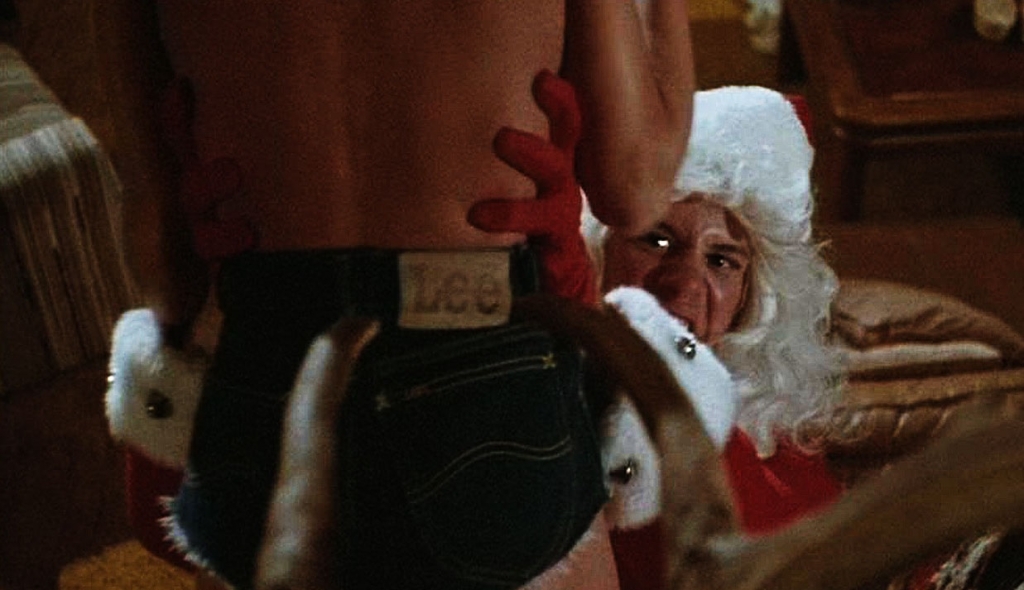 The cult following bore four sequels and a remake/reboot, Silent Night, in 2012. The sequels were all direct-to-video releases, with the exception of the second: Silent Night, Deadly Night Part 2 (1987). The sequel continues the story of Billy’s younger brother, Ricky (Eric Freeman), and it is mostly made up of flashbacks from the first film.

The sequels get weirder, starting with the third, Better Watch Out! (1989). This one has Ricky (Bill Moseley) following a clairvoyant blind woman visiting her family on Christmas Eve. The fourth film, Initiation (1990), leaves the killer Santas behind and centers around a feminist cult. The fifth and final sequel, The Toy Maker (1991), stars Mikey Rooney as a toy store proprietor whose toys come to life and go on a murder spree.

Silent Night (2012) was a loose remake starring Jamie King and Malcom McDowell who play cops hunting down a killer Santa in their town.

The original film itself is one crazy and traumatizing scene after another. 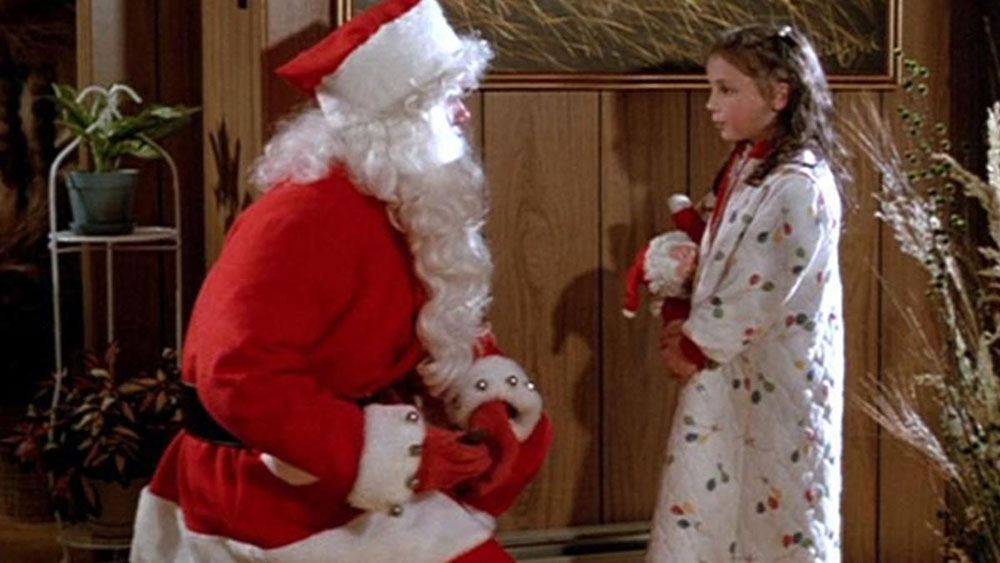 It features a surprising amount of violence that happens in front of children — from the inciting incident of young Billy seeing his parents killed to the final scenes where adult Billy is gunned down in front of an orphanage. When you think about it, it’s actually a little ironic the amount of childhood trauma depicted in the film, given all the parents who protested the film because its poster and trailer traumatized their children.

It’s also a little funny to think about how notorious this film became given the fact that so many Christmas horror movies came before Silent Night, Deadly Night — and even more have come after. Yet, somehow, this film remains the most controversial Christmas horror film to ever shimmy down the chimney.

It’s impossible to know now how this film would have done without the controversy, but Silent Night, Deadly Night proves in spades that there is really no such thing as bad publicity.