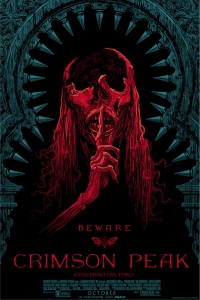 Crimson Peak is the new gothic horror romance from horror maestro Guillermo del Toro, operating at his most stylistically indulgent. His comicbook and action spectaculars have made him a household name in the states, but Crimson Peak is much closer in tone to his atmospheric, Spanish-language chillers like The Devil’s Backbone. In fact, del Toro has called Crimson Peak one of the three films he’s most proud of, with The Devil’s Backbone and Pan’s Labyrinth being the other two. Like those other two del Toro masterpieces, this film feels like a deeply personal work of art, with every detail lovingly and painstakingly obsessed over.

It’s a testament to del Toro’s clout as a filmmaker that the studio greenlit this expensive, R-rated film that is impossible to categorize. He hasn’t always had an easy time getting projects off the ground, and we don’t see many horror movies like Crimson Peak made at this scale for a reason. Del Toro reportedly took a pay cut to maintain a strong vision for the film and keep an R-rating, and there’s a fairly significant amount of gore and blood. But it’s not really a horror film in the traditional sense of the word. While creepy and unsettling, there aren’t any real scares. It’s more of a moody thriller and gothic romance, a fact that is likely to turn off many genre fans.

Overflowing with literary and cinematic references, Crimson Peak isn’t the typical haunted house film many may be expecting. This is a ghost story in which the heroine has far more to fear from the living than from the dead. Del Toro has crafted a high-quality throwback to the intensely moody period films made during Hollywood’s Golden Age.

Crimson Peak tells the tale of an American heiress, Edith Cushing (Mia Wasikowska), who is smart, strong willed, and utterly bored with high society life. An anomaly in turn-of-the-century New York, Edith would rather write fiction than attend fancy balls or try to land herself a well-to-do husband. She isn’t interested in looking for love, or even writing about it. Her stories have a supernatural bent, and she declares she’d rather be Mary Shelley than Jane Austin.

Though a skeptic toward romance, she believes in ghosts. In fact, she was visited by the ghost of her late mother when she was just a girl, at which time she received a cryptic warning to “Beware of Crimson Peak.” She didn’t understand what that meant, but the ominous advice becomes quite clear later in the story when she relocates to a crumbling British mansion perched atop a heap of blood-red clay with her charming new husband and his oddly creepy sister.

The hard-to-woo heroine does eventually fall to the charms of British baronet Thomas Sharpe (Tom Hiddleston). He retains his royal title, even though his family has long lost its considerable fortune. Thomas lives with his raven-haired sister, Lucille (Jessica Chastain), and it’s clear from the beginning that something isn’t quite right between these two siblings. Edith’s father strongly objects to the romance. He, too, has a bad feeling that the two are hiding something sinister, and he hires a private investigator to dig up dirt on his daughter’s suitor. Unfortunately, he meets a brutal and untimely end at the hand of an unseen killer, and Edith falls into the arms of Thomas in her time of grief.

The newlywed and newly orphaned heroine relocates with the brother-sister pair to their family estate at Allerdale Hall, nicknamed “Crimson Peak” for the way the clay underneath the earth stains the snow blood red (something Edith doesn’t learn until later in the story).

Edith quickly learns something amiss as she begins to be besieged by ghosts of the past, including another visit from her dead mom and that same ominous warning. When she starts coughing up blood and finally discovers the fateful name of the estate she now calls home, she realizes the true danger she is in.

Crimson Peak is a remarkable design achievement for del Toro and his team, even by the filmmaker’s already impressive standards. It’s a lush, atmospheric, stunningly beautiful film that reunites the director with cinematographer Dan Lausten, whom del Toro worked with on Mimic almost 20 years ago (and who also shot the visually impressive Silent Hill).

Part of what makes the film so impressive is the stunning contrast of Edith’s life in America with her new life in Britain at Allendale Hall. The scenes in America are beautifully lit with autumnal mustards and oranges, a mellow golden landscape lush with festive garden parties and flickering gas lamps.

Allerdale Hall, on the other hand, is a creepy black ruin of a mansion standing in the middle of empty fields. And it’s the mansion itself that is the real star of the film. The brainchild of del Toro and production designer Tom Sanders (who previously worked on Bram Stoker’s Dracula), the house is practically a living, breathing character all its own.

Red clay oozes up through the rotting floorboards, coating the walls of the basement. The roof in the mausoleum-like home is deteriorating, and the hall is always filled with outside weather, including a constant flow of falling leaves and snow. Ornate in the extreme, entire rooms house nothing but hordes of black moths. There’s a forbidden basement full of burbling blood-red clay vats. The house creaks, moans and shifts…crying out with the sins of the past. It’s a house falling apart because of moral decay, where the ground literally bleeds.

With the exception of the CGI ghosts, most of what is onscreen is physical, and the atmosphere is exquisitely drenched in symbolism and dark secrets buried just below the surface. The images themselves have tremendous power. Del Toro’s vision is evident in every frame. He also has the benefit of three unbelievably strong actors who are able to sell his material with great conviction and believability. The performances are almost theatrical. The entire production is backed by Fernando Velazquez’s wonderfully eerie score.

The movie is one that simply must be seen on the big screen simply because of the sheer visual magic del Toro is able to create. It’s nothing short of an artistic experience to behold. The story sucks you in, but the visuals consume you. This is not a film made for box office grosses. Rather, it is an extraordinary creation from one of the genre’s most gifted and visionary filmmakers. It’s true movie magic that is sure to stand the test of time.