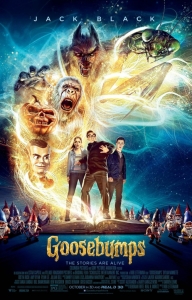 R.L. Stine, who started off working on a Nickelodeon children’s show, became one of the most prolific horror writers of our time and landed the Goosebumps series ahead of The Anarchist Cookbook on the ALA’s Most Banned & Challenged Books List. Goosebumps led to several subsequent series, but none captured the intersection of childhood and fear as distinctly as those original 62 books published between July 1992 and December 1997.

These stories were the gateway drug for many future genre fans. It was our first taste of the dark and twisted…an introduction to the world of the creepy, spooky things that go bump in the night. Stine created an inventive and captivating world replete with cleverly conceived monsters that were derived from adult horror, but which were imaginatively skewed to a younger audience. Stine gave us chills and thrills without the traumatizing nightmares. His success is well deserved, and his stories have been adapted for television and direct-to-video realms. But how well does Stine’s vision translate to the big screen?

Rob Letterman takes on the challenging task of directing the feature film adaptation of Goosebumps, penned by Darren Lemke (screenplay) and Scott Alexander and Larry Karaszewski (story). The filmmakers go big by constructing a meta-narrative that can contain an incredible number of Stine’s monsters. In fact, they manage to cram about 25 of Stine’s most recognizable creatures into the frenzied action, giving Slappy (the ventriloquist dummy) one of the more prominent roles. This makes sense given the fact that Night of the Living Dummy is the most popular franchise in the Goosebumps series.

The film stars Jack Black as R.L. Stine. He’s living like a hermit in the burbs of Madison, Delaware with his daughter Hannah (Odeya Rush). He’s keeping his famous identity a secret, and he’s extremely protective of Hannah. We soon discover the reason for Stine’s reclusive nature and paranoia. He’s got a private library of Goosebumps manuscripts he keeps behind lock and key. If anyone opens one of the books, the monsters pop off the pages and wreak havoc on the real world.

The action begins when a New York teen, Zach (Dylan Minnette), moves in next door with his widowed mom (Amy Ryan). He develops an instant attraction to Hannah. Convinced she’s in trouble, he breaks into Stine’s house with his best friend, Champ (Ryan Lee). The two boys sneak into Stine’s library and crack open a book, unleashing the Abominable Snowman of Pasadena. Nonstop pandemonium follows as more monsters get released, and it’s a mad dash to try to contain the troublemaking creatures before they destroy everything in their path.

The film doesn’t waste any time getting into the meat of the mayhem, and it’s a bit of an exhausting ride. It seems clear that a large chunk of the narrative got cut in order to get to the monster stuff faster. But Goosebumps clearly knows its audience and doesn’t hold back from the frenetic action or the visual CGI feast.

Danny Elfman works his usual magic, creating the kooky score for the film that infuses it with a playful spirit. The creature visual effects by Moving Pictures Company (The Martian, Pan) are fittingly threatening, yet cartoonish enough to not be too intense for young viewers. While an over-reliance on computer generated graphics can harm a movie, all the creatures in Goosebumps are rendered quite nicely and integrate well with the live-action cast and set pieces. The cast itself is consistently engaging, handling the comedic elements of the story quite competently.

In addition to Slappy (voiced by Jack Black), a number of interesting monsters get a fair amount of screen time, including a giant praying mantis from A Shocker on Shock Street, a werewolf in gym shorts from The Werewolf of Fever Swamp and a group of homicidal garden decorations from Revenge of the Lawn Gnomes. Virtually all Stine’s most recognizable creatures get at least a cameo. Some shots include an entire army of monsters, which will make this a lot of fun to watch on DVD.

Stine’s character frequently refers to an all-important “twist” he builds into each story, and this movie has a twist of its own that works quite well and adds some depth to the mostly fun and irreverent story. There are times when Goosebumps broaches mature themes and ideas (such as how Stine spent so much time imagining monsters in order to battle his loneliness), but they don’t go on for too long. This movie knows it’s all about the action and, to its credit, keeps the primary focus squarely on all those scary and creative monsters.

Goosebumps is ultimately quite a fun (and surprisingly funny) ride. It’s never boring and can easily hold the attention of its younger target audience, providing plenty of thrills and some softball scares. For adults, it’s a nicely nostalgic experience that has enough charm and likability to make for an enjoyable watch. Keep your eye out for a fun cameo from the real life R.L. Stine.

Goosebumps is a fun and frantically paced adventure for kids, which nicely captures the spirit of R.L. Stine’s original books. The film also offers a nice nostalgic vibe for adult fans who grew up reading Stine’s supernatural horror novels.