“Blood Hook” is everything you would expect from a low budget fishing-based horror film from the 1980s. Let it reel you in, hook, line, and stinker. 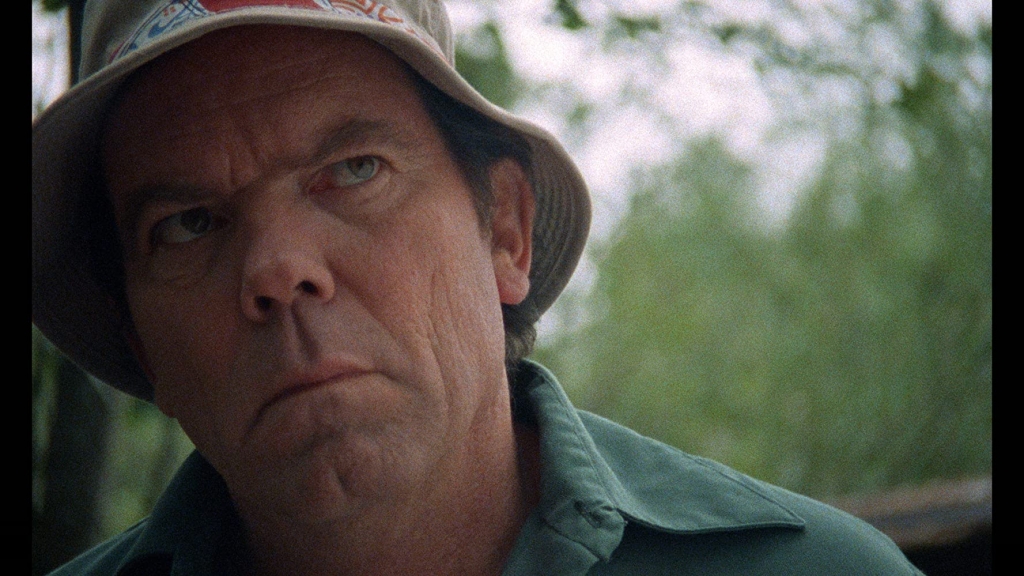 Seventeen years after his Grandfather disappeared, Peter and his friends return to the family lake house for the town’s biggest event: a fishing festival. When the townspeople and his friends start turning up dead, Peter must reel in the deadliest catch of his life. Let’s dig into 1986’s Blood Hook, directed by James Mallon.

The Dad jokes write themselves with this one. I’m not sorry.

Originally titled “Muskie Madness”, it was re-dubbed as Blood Hook once Troma bought distribution rights; they thought the public would not know what a Muskie is (I surely didn’t).

From the opening scene, watching Grand Dad disappear into the beautiful Wisconsin lake in such an impotent fashion, I knew what I was in for. Thus, my guard was down. Even so, the delivery of the dialogue throughout reminds me of that Saturday Night Live sketch where Bill Hader auditions for Back to the Future as Al Pacino and can’t get the syntax correct for Doc’s famous “Great Scott!” line.

A standout performance for me comes courtesy of Bill Lowrie, who plays the squatter and conspiracy theorist Evelyn Duerst (pronounced Evil-Lin). Evelyn’s loony, militant rants are an ancient echo of the present-day cyberspace cesspool. But woefully, his anxiety toys with serendipity in this story.

Peter, played by Mark Jacobs — one of the only Actors to continue at the craft after this film, even landing a part in Martin Scorsese’s Goodfellas (1990) — drags us through most of the film as ruse upon ruse, and red herring upon scapegoat, tediously unfolds. 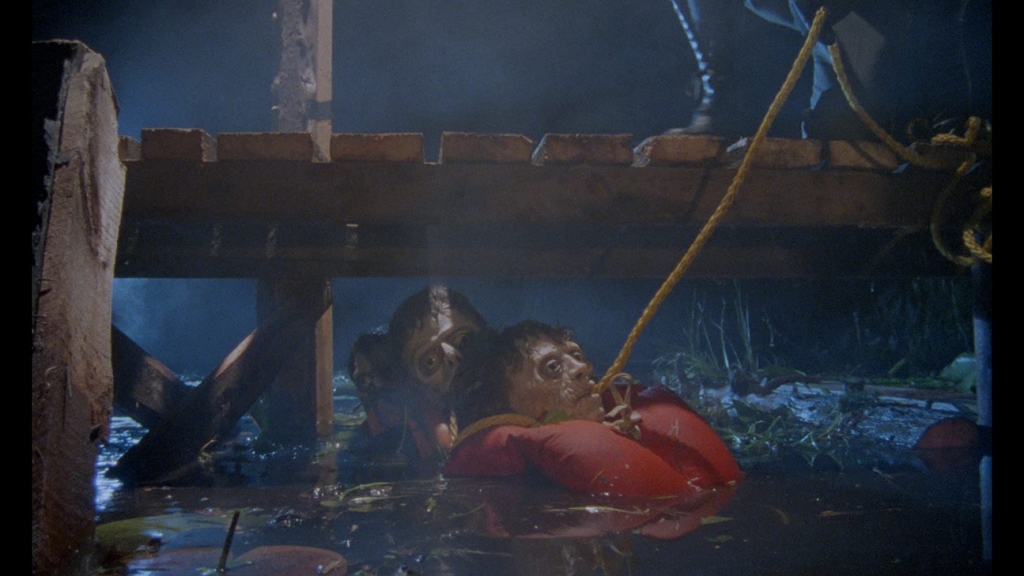 The giant, murderous, fishing lure and the indication of impending doom from the call of locusts (perhaps an inspiration for the same tactic used in Pumpkinhead (1988)) are laugh inducing enough that this could be fun to watch at a summer cookout. The local Live Bait shop owner, Leroy Leudke, played by Don Winters, delivers an unintelligible, knock off version of a T.S. Quint monologue. But he eventually abandons speaking all together for more guttural grunting.

There are a couple of excellent special effects scenes, like a rope run through the chin and mouth of a victim like stringing up human bait. A clump of corpses strung similarly also stands out, with their bulging cartoonish eyes and flesh. I would watch the movie again just for this scene.

The score, performed by one-off composer Tomas A. Naunas, is enjoyable — even reminiscent of the epic Riz Ortolani score for Cannibal Holocaust (1980), a personal favorite soundtrack.

If you can get past the fact that the murder weapon seems more like a painful inconvenience rather than a fatal apparatus, then you can probably enjoy Blood Hook with a few burgers, beers, and friends. Just stay away from the lake. 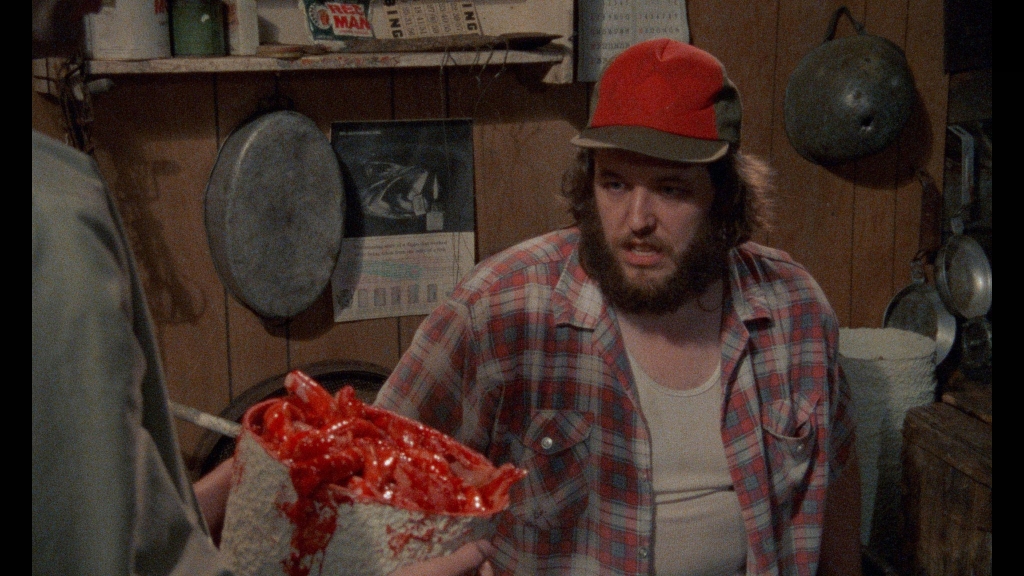 Just about the entire cast were newcomers at the time, and most have not acted since this film. Thus, the fame lies within the landmark giant Muskie featured at the festival; a real statue located in Hayward, Wisconsin.

The filmmakers obeyed the request of Lisa Jane Todd as Ann to cut a nude scene. They instead shoot from the side, keeping the scene PG-13. The only gratuitous acts here have been my puns.

Sandy Meuwissen as Bev D is as cute as her character is promiscuous. Her bubbly personality is infectious and leaves no wonder why everyone falls for her. 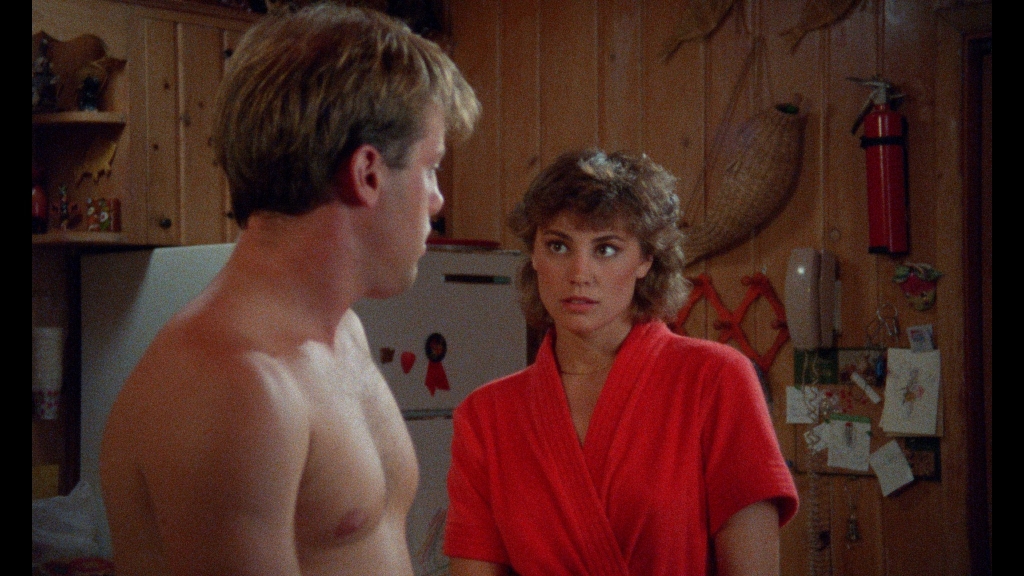 Grab a camera, call up the local camp, cast your friends, and pull all the favors you can. You can remake this film. Or your own film. This film is a testament to fun, even if thirty-five years later some dickhead writer may rag on your effort. You still made the effort. Go do it.

Leroy is still out there somewhere. Listen for the locusts.

Connecticut-based distributor Vinegar Syndrome does have this title available on Blu-ray, though as of writing, their site is down for maintenance readying for a Black Friday sale (don’t miss that!). If you’re a little too excited to reel in today’s catch, you can rent it for $5.99 on Amazon.