An atypical story about the most written about profession, “Deadline” has some heart and intellect — but mostly blood, lots of blood!

A horror Writer struggles to meet his professional obligations as his family life falls apart. He falls deeper into depravity as fiction and reality meld. Let’s dig into 1980’s Deadline, directed by Mario Azzopardi.

There’s a reason so many stories are about writers. We write what we know. Deadline is a decent attempt to focus on the anima of the scribe.

The structure is choppy as we make gauche cuts between an underwhelming reality and an apposite horror element from within the Writer Steven Lessey’s mind. Played by Stephen Young, the character Steven is completely unlikable. A negligent father and husband. Abusive and aloof. You’re never able to feel bad for his marriage failing, which leaves the scenes from within his stories to lead the show.

They do lead rather well, though. Plenty of severed bits and blood-soaked sets. Plentiful religious iconography lays down a creepy atmosphere. The transitions leave you always guessing if we’re watching one of Steven’s films being shot or if we’re following the pages within his brain. A black goat with telekinesis (is that you Phillip?).

A Nazi Punk band that has been commissioned to find the fabled brown note. A couple of kids tying their Grandma to the bed and lighting her on fire. Steven’s mind is erratic exploring all this imagery.

It’s not until tragedy befalls Steven and his wife Elizabeth, when their kids are playing with a noose and an accident reminiscent of one of Steven’s stories occurs, that the A-story really bites.

His plummet into depravity and despair brings about, in my humble opinion, the best jump scare I’ve ever seen. I didn’t expect it, and it pulled at my heartstrings. I won’t disclose it in case you want to experience it for yourself, but it occurs around the 1 hour 23-minute mark.

The ending seems fitting and deserved as Steven does what Twain told us to do: “Write what you know.” For his final chapter, he spills blood on the page.

There is a scene between Steven and his Wife that feels accidental, if it hadn’t foreshadowed his violent outburst towards a cadre of ladies he invited home from a club. Steven is angry after being publicly castigated for his fiction’s role in the degradation of society. He lashes out physically when she laughs at him but instantly apologizes for his transgression. Focusing on the addiction and the negligence in their relationship would have clearly conveyed the turmoil, without this cheap tactic. 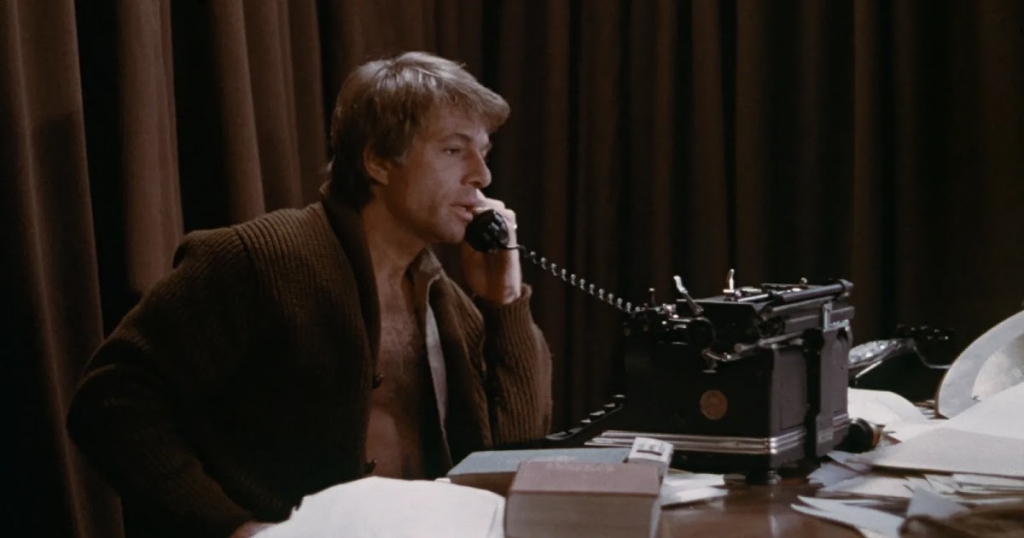 Steven’s wife leaves him after their Daughter is killed, so naturally he throws a drunken party with some clubbers. All the ladies could have been cast from a model agency. They also do a splendid job of wrecking the joint before leaving.

The bones of the story are there. Cutting into the mind of the Writer is absorbing. The polyphony of weaving the themes of reality and imagination could really work if the reality were more engaging.

Vinegar Syndrome released Deadline on Blu-ray this year, right before the world shut down, begging the question of whether we’re living in one of Steven’s twisted stories. Grab it on Amazon until their site comes back up.