The music. The pastels. The neon lights. The leotards. Any 1980’s nostalgia enthusiast should find tranquility in the warm glow of “Death Spa”. 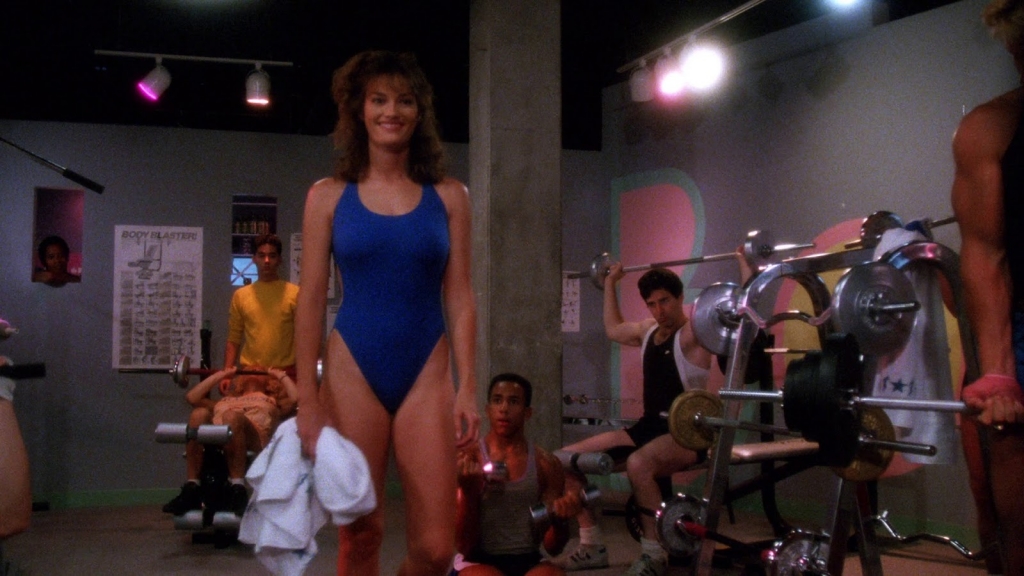 Michael runs a high-tech fitness club, but the equipment in his gym starts killing and maiming his customers. The mystery deepens as he begins receiving computer messages from his late wife, who recently committed suicide. It’s a race to stop the carnage before his memberships are slashed, to death. Let’s dig into 1989’s Death Spa, directed by Michael Fischa.

Even though this straight-to-VHS romp came at the tail end of the decade, this is pure 80s. A plethora of hot pink leotards, and a brilliant Canucks V style jacket on supporting actor Ken Foree, will date this film immediately. The gym equipment looks more like an art installation than something functional. It also boasts a radical score. Even the computer driven plot seems overly 80s.

The backstory of Michael’s (played by William Bumiller) late Wife Catherine and her still living twin David, who is the brains behind the gym’s automated computer programming, is rather soap opera-esque. The subterfuge is predictable, but easy to track. The film even gives off a bit of a Psycho vibe.

David’s dialogue is clever and often eloquent, which strikes out of place and benefits his creepy red herring nature. Speaking of dialogue, the most 80’s insult ever was hurled at the gorgeous Darla (played by Chelsea Field) by a fellow gym rat: “I’m beta, you’re VHS.” In hindsight, he may have been disclosing his endurance deficiency, as he clearly chose the losing horse in the video format wars. 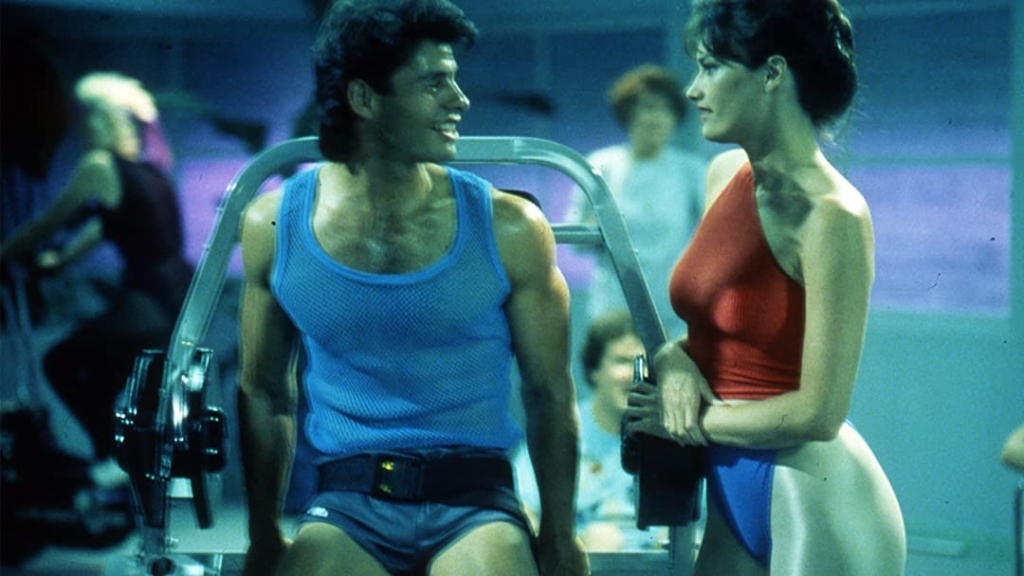 There is a dense thread of dangerous machines and technology that permeated horror films of the 1980s. It seems we didn’t listen or take it seriously, as we’ve moved into a world even more automated than the one depicted in Death Spa, which probably seemed unrealistic at the time.

On a less serious note, this certainly must be the only time in cinematic history that a floppy, under cooked asparagus spear was used seductively in a romantic scene.

Some of the deaths are a bit hokey — ie, a champagne massacre and death by eel. And the special effects gore flips back and forth wildly from ghastly and dark to Brain Dead-style blood splatter. Overall, however, the effects are amusing and make this even more worth a watch.

It is mind blowing that Ken Foree isn’t in every scene. And that’s not just because of his notoriety; the man is commanding. You will, of course, recognize him instantly from George A. Romero’s masterpiece Dawn of the Dead (1978) as well as Zombie’s Halloween (2007), among many others. 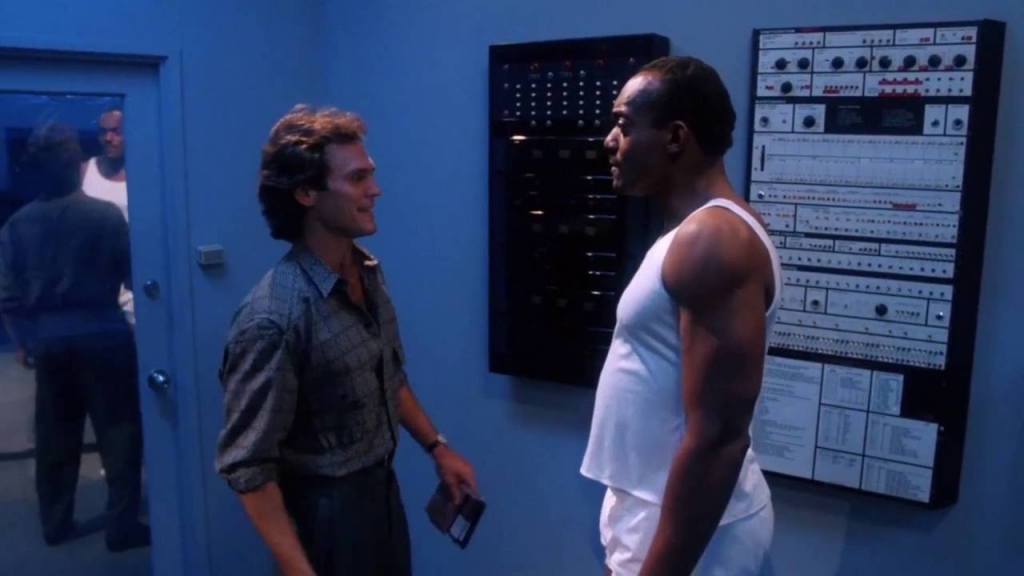 Laura, the first victim of the bloodthirsty health spa, played by Brenda Bakke, was familiar right away. But I had to probe her filmography to place where I knew her from. Seeing she played Cordelia, the resident escort from Tales from the Crypt: Demon Knight (1995), rang a bell. But it was her acrobatic “sex scene” in Hot Shots! Part Deux (1993) with Charlie Sheen that really struck a chord.

Perhaps dating myself and simultaneously revealing a guilty pleasure, Chelsea Field as the hard body Darla, was someone I knew straight away. I recognized her, even without combat gear, as Teela from the Masters of the Universe (1987).

Also, of note would be the debut of Karyn Parsons (uppity Hilary Banks from The Fresh Prince of Bel-Air) in a small role. 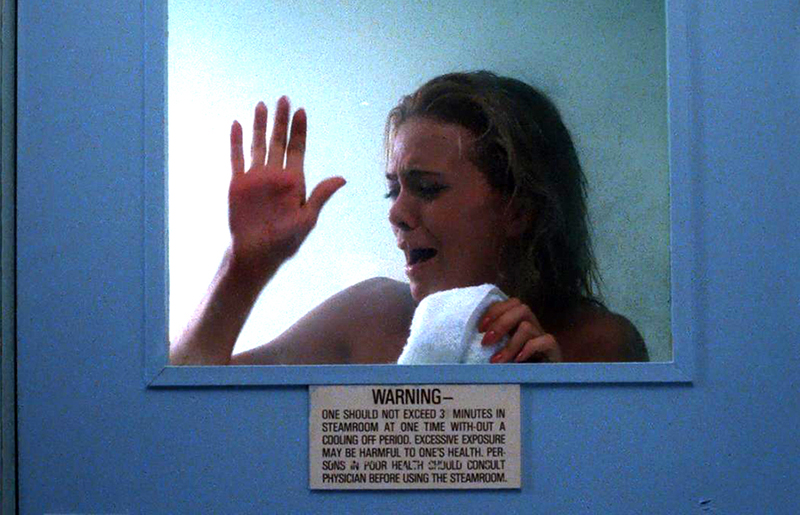 There are plenty of pretty people in this film, but none more entrancing than Shari Shattuck as the malevolent ghost of Catherine. With flawless skin and feline-like bone structure, it is a shame not only that her voice was inexplicably dubbed but that she also saw such little screen time. Shattuck went on to be featured and star in many TV series. Most recently, she can be seen starring in another demonic possession film, Scream at the Devil (2015). An author as well, Shattuck has written a series of novels — and at almost 60 years of age is still endowed with spellbinding beauty.

An ironic homage seems appropriate enough for the 80s retro resurgence that it’s possible this film is already being remade, at least in concept, by some neon-obsessed filmmaker out there; we just don’t know it yet. AHS 1984 (Season 9 – 2019) dallied with the 1980’s aerobic craze a bit before moving to the woods and losing their way.

Despite the cliffhanger ending, no trilogy was born of Death Spa.

Death Spa is currently available as a DVD/Blu-ray from Gorgon Video for a bargain cost of just $15. Death Spa is also available to rent or buy on many streaming platforms, such as Apple TV, Google Play, and YouTube.