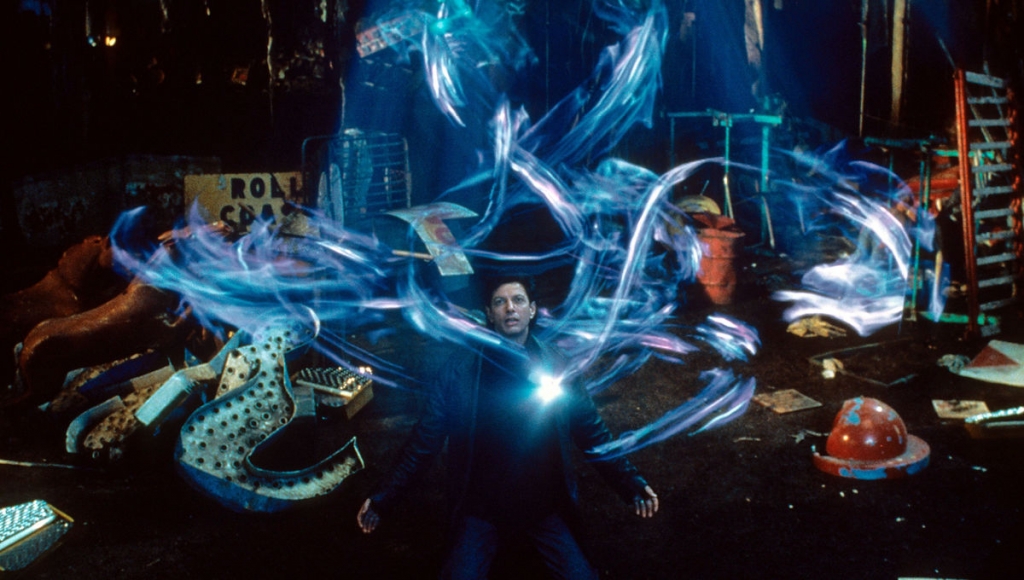 A man who had a near-death experience is resuscitated but finds himself mentally entwined with a serial killer and must solve who he is before his own family is in danger. Let’s dig into 1995’s “Hideaway”, directed by Brett Leonard!

Based on a book by Dean Koontz, it was called a financial failure but made a modest amount of money over its budget. If it had been filmed just six months later, it could have capitalized on the superstardom that was awaiting Alicia Silverstone (Regina) and Jeremy Sisto (Jeremey/Vassago) in Clueless.

This has got to be one of the most wickedly awesome openings of any film I’ve seen.

Jeremy murders his mother and sister and they’re impaled and bound in a praying position. It’s truly evil and twisted. Up to the attic and a shrine to Satan he goes for a ritualistic suicide before he shoots into a portal to hell that features some unimpressive by contemporary standards CGI of fire and brimstone.

Pivoting to star Jeff Goldblum (Hatch) and his wife and daughter Regina, a car accident leaves Hatch dead, but a doctor (Alfred Molina) is able to revive him by controversial methods two hours after death. 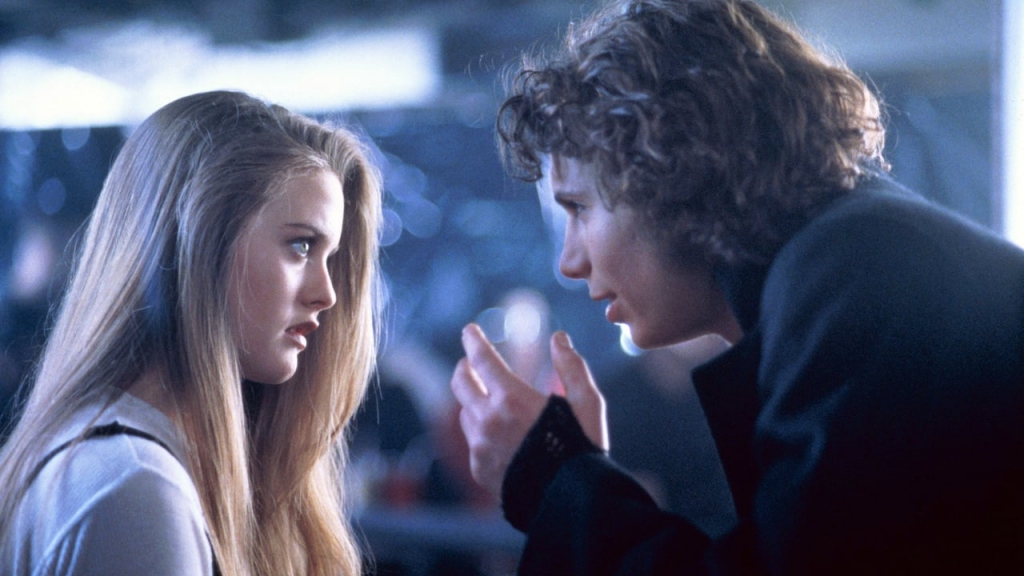 The seed is planted that this is the second time he’s pulled off such a resuscitation, and the predictable twist that comes with that finds Hatch now alive but mentally tethered to a serial killer (Jeremy).

Hatch does his best to solve the mystery of who the murderer in his visions is and where are the girls he’s killing, not realizing the killer can see Hatch’s life too and now comes for his daughter.

A subterranean lair that was pretty well dressed is reminiscent of the Lost Boys hideout (the fangy ones, not the Peter Pan boys).

A laughable climax, with a satanic ball of tortured souls, begs the question: how many times can Jeremy Sisto die in one film?

Stick around for the stinger which closes out with a version of the movie game.

Rae Dawn Chong starred in straight to video (Time Runner) and award-winning (The Color Purple) films alike, but as an admitted Arnold guy it’s her role in Commando that I remember her for.

Alfred Molina has been in a ton of films that we’ve all seen, including Ron Howard’s adaptation of the Dan Brown novel (confused as non-fiction) The Da Vinci Code, as well as Doctor Octopus in Sam Raimi’s Spider-Man 2.

It didn’t make sense to me until the very end, but they had to find some way to deliver an angel in this battle of good and evil. Hatch’s late daughter becomes the deus ex machina, but there is nothing clever about it.

Alicia Silverstone or Jeremy Sisto may be the easy answer, but Jeff Goldblum is the right answer… always.

Another standout in a small but effective role is the gorgeous Mara Duronslet (Zoe) whose eyes are entrancing, and she delivers the victim arc concisely.

Dean Koontz was so unhappy with the way the film turned out that he mounted a campaign to expunge his name from the credits. While unsuccessful in that effort, he did accomplish having any promotional material be free of his byline. I’ve never read the source novel so I can’t speak on whether it deserves another adaptation, but word is the film strays far from the path. This is a very 90’s story.

It seems Cinema Cult released a Blu-ray, though it’s hard to track down info or availability. There are DVD copies for sale on the secondary market for a decently low price. You can also rent to stream on Amazon, Apple, and Google Play.