A stylized achievement of cinematography with a story that inspired genre films for decades, this hidden gem was saved by Troma. 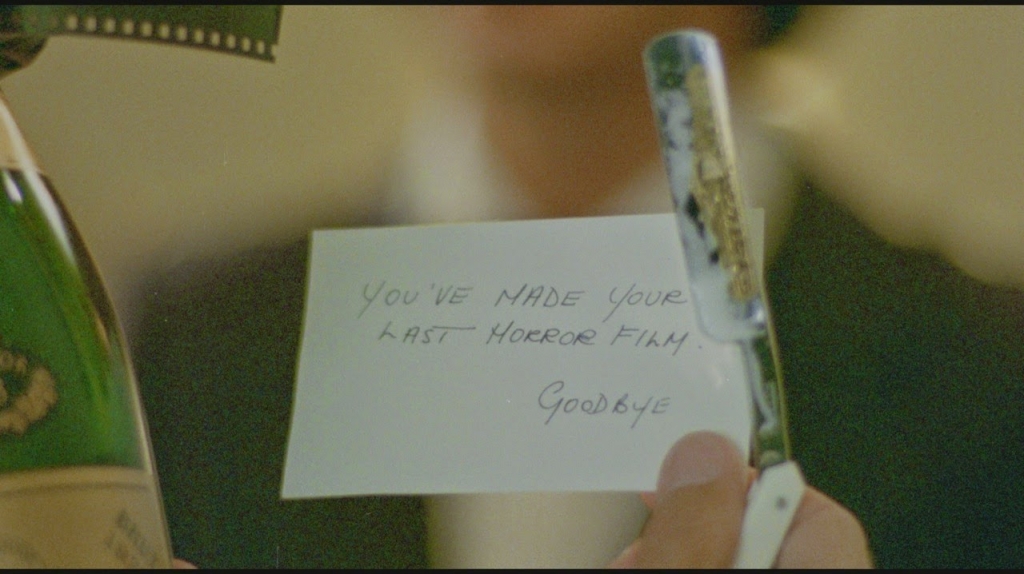 Aspiring filmmaker Vinny heads to Cannes to convince a movie star to be in his horror film, while bodies start piling up around the festival. Let’s dig into 1982’s “The Last Horror Film”, directed by David Winters!

It has the same genre-ending implications as naming a song “Rock is Dead” or “Punk is Dead” or “Vaporwave is Dead” (a girl can dream). And much like its melodic counterparts, it can never quite live up to the promise that there’s no reason to carry on with this style as the best version has finally been made. Of course, the title here directly references a small element of the story instead of a grandiose gloat.

Less than thirty seconds elapsed, and we’re right into a helping of fleshy encased silicone and platinum blonde hair as a vulnerable bather is electrocuted in a movie within the movie. We follow aspiring indie filmmaker Vinny Durand as he battles insecurity and a rather unsupportive Mother (played by Joe Spinell’s actual Mother) in his quest to make an Oscar-winning horror film (doesn’t he know those award shows don’t consider us REAL filmmakers?).

He decides to throw caution to the wind and gets off his ass to head to Cannes in hopes of casting his favorite actress Jana Bates (Caroline Munro). Reportedly, the filmmakers lacked permits to film at Cannes, so they did so guerilla-style. And honestly, it adds to the panache. 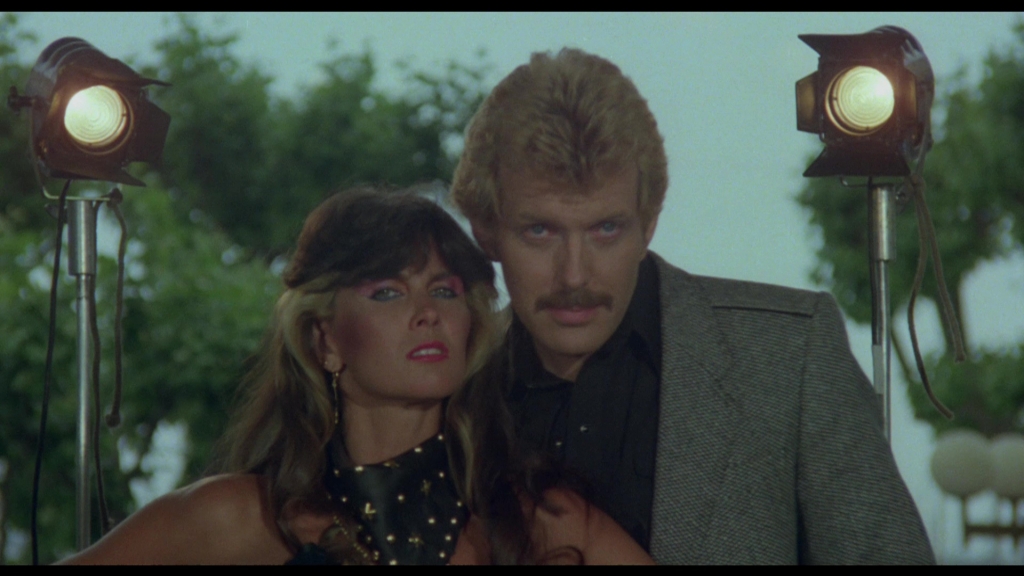 Even though the disclaimer before the open of the film stated this version was derived from damaged and multiple prints and to expect a choppy and degraded experience, I continuously found myself surprised at the artistry and pleasing beauty of the in-camera and post effects.

Some cool tidbits from the Cannes filming include a promotional poster for the movie Stab (inevitably released as Still of the Night) starring Roy Scheider (Jaws) and Meryl Streep that features some fantastic typography — as the T in Stab is shaped like a knife with a drop of blood hanging from the tip of its blade. Further, a marquee for the Star Cinema, which the climax is shot in, shows Cannibal Holocaust playing.

I believe it’s more than coincidence that Stab (though it was the working title of a real-life film) become the film within a film in the Scream series, as a scene within the theater features Jana on the run from Vinny while the audience believes it to be a publicity stunt. Sound familiar?

The climax features a good twist, set up with nice cut scenes of film negative being scratched up as characters are killed off, which matches Vinny’s frantic nature and lends to solid misdirection. Joe Spinell turns in the best performance of his career in my opinion. He plays a plaintive, bumbling, and gentle man much better than a depraved and twisted killer. The epilogue serves up a decent laugh as well. 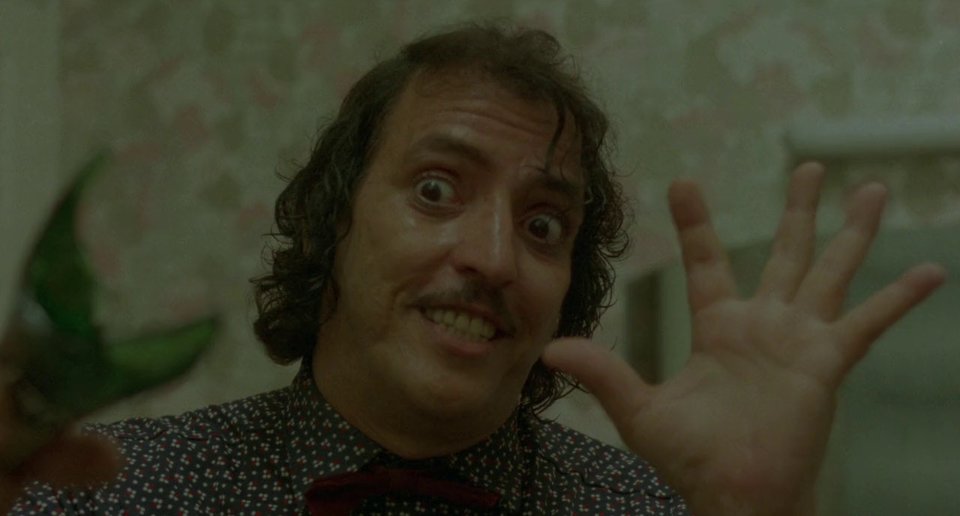 Caroline Munro (Jana) was featured across from heavyweights such as Peter Cushing and Christopher Lee (Dracula A.D. 1972) and Vincent Price (The Abominable Dr. Phibes) and was even a Bond Girl (The Spy Who Loved Me).

If it weren’t for random revelers getting naked and taking a midnight swim in the ocean, how would Vinny get his inspiration? All the depravity fits within the boundaries of the film.

Caroline Munro (Jana Bates) is drop-dead beautiful in every film she stars in, but an odd choice was made to have her hair two-tone, in what seems like an attempt to be fashionable. Totally an eighties thing to do. It didn’t work. 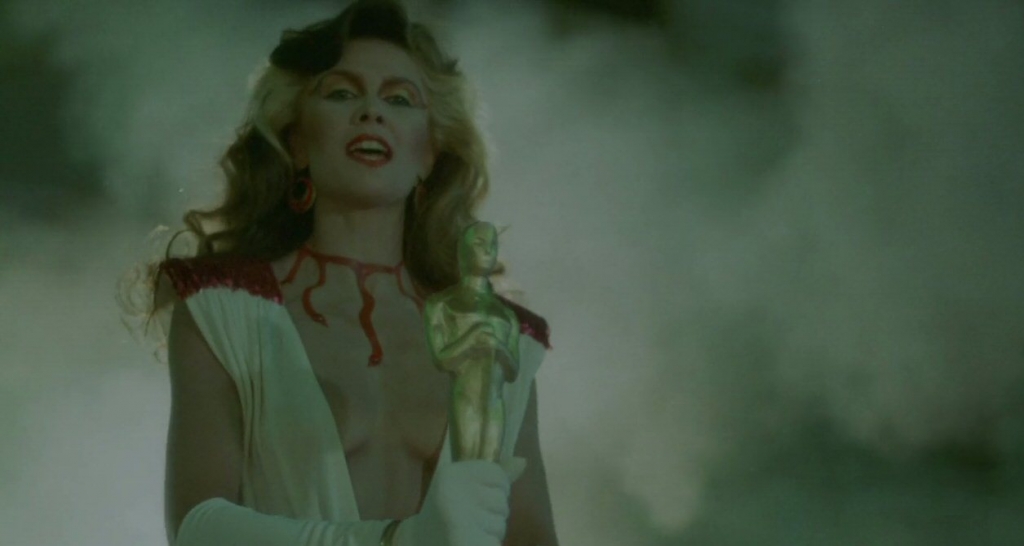 I’ve never heard this film cited as inspiration or even a guilty pleasure (there shouldn’t be much guilt attached, it’s rather wonderful), but I imagine the elements that sound familiar to other more mainstream films were mined from this buried treasure. I urge you to seek this one out; give Mr. Kaufman a few of your hard-earned bucks and enjoy the show.

It wouldn’t be the LAST horror film if there were spin-offs or sequels, now would it?

Troma has released multiple versions of this film, originally a DVD under the title Fanatic, but painstakingly released a Blu-ray version under its proper name. It seems Troma now offers a cheap monthly streaming service at $4.99 a month, which you may find of great value, or you can stream from Flix Fling or rent on Google Play or YouTube.