World class sets, props, effects, and creatures — plus strong performances from a well-known cast — turn a cliché premise into an enjoyable genre gem.

A team of miners search for precious metals 16,000 feet below the Atlantic Ocean. When they discover a safe aboard a Russian shipwreck, they find a nefarious secret experiment safe guarded among its contents that wreaks havoc on the crew once it’s unleashed. Let’s dig into 1989’s “Leviathan”, directed by George P. Cosmatos!

If the plot seems familiar, it’s for good reason. You can count James Cameron’s The Abyss and DeepStar Six directed by Sean S. Cunningham, among others, as mirror images of Leviathan — all released in 1989. Unfortunately for all, Cameron’s literal death trap of a production ate up all the box office bucks and left everyone else with a pittance.

For what it’s worth, after finally watching Leviathan, I felt it was as effective visually as The Abyss was. And it didn’t have any of the near-death experiences or onset turmoil that Cameron’s creation fostered. Of course, Cameron chose to go the realistic route filming inside an unfinished nuclear reactor pit with over 7 million gallons of water, whereas the Leviathan production utilized the old school way of filming “underwater” – add smoke and slow down the cameras. It doesn’t look cheesy at all.

Where this film lacked was its story, although it did have good pacing and interesting characters. Daniel Stern especially, as the vulgar and despicable Six-Pack, went over the top just enough. 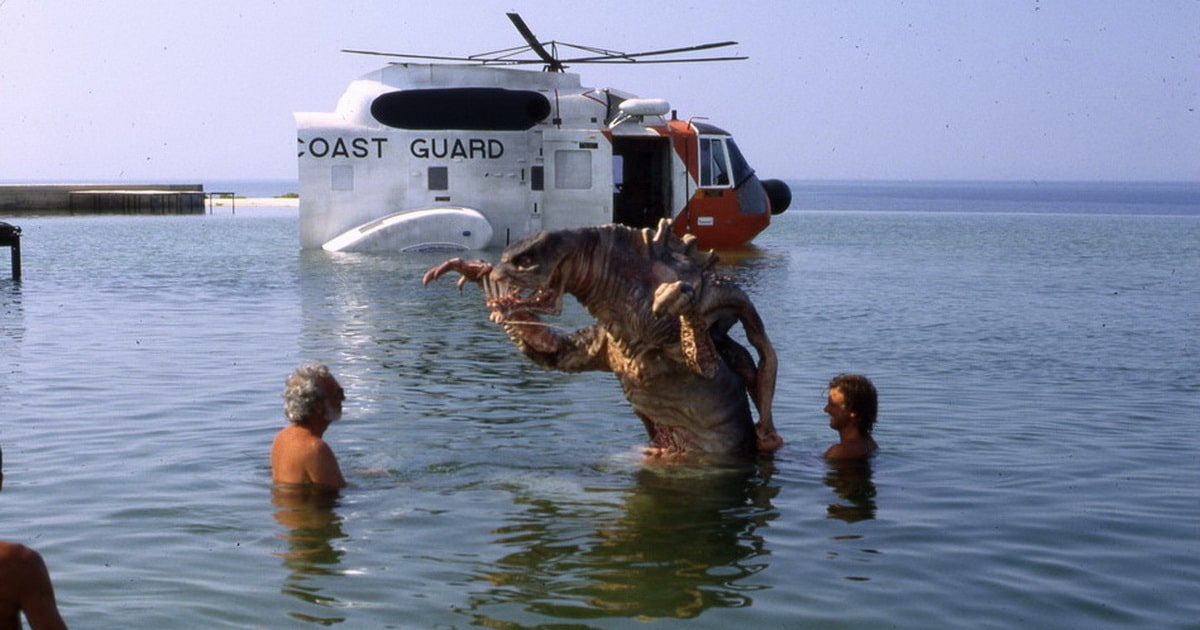 The star of the show was the set and creature design. It’s no wonder it was so impressive, with the duties being handled by Stan Winston Studios. If it looks like Aliens, there’s good reason for that, too. Winston’s crew handled that film as well. Coupled with special effects by ILM, there are few 80’s Sci-Fi/Horror films that put something so perfect in front of the director to film. Add in a Jerry Goldsmith score, where he used real whale sounds in the composition, and you have the makings of an underappreciated flick.

While the reminiscent set design is impressive, it’s another “borrowed” element from the Alien franchise that drags down the love for this film. They really went for a chest burst, an inexcusable facsimile. It’s a bit The Thing underwater and a bit Aliens underwater — which is all good until they surface, and the science ruins your brain and cancels your buy-in. It’s just not feasible to go from 16,000 feet to sea level in a matter of seconds and survive, even with the prospect of technology in 2027 (when the film is set).

Besides the unbelievable ending and a bit of plagiarism, it remains an enjoyable and worthy dig.

Nothing to report on here beyond having cast/crew swim with sharks for a last bit of peril during the climax. You would hope they knew what they were doing. There were some close calls with the sharks brushing right against the stunt performers.

Ernie Hudson was in tremendous shape for this film. His diction always projects him as the smartest, most eloquent human in the room. Amanda Pays portrays the sporty Willie, and her beauty shines through the drab greys and off-white tones of a space/underwater adventure story.

Six films of similar plot and setting were released in the same year as Leviathan, so you’d have to wonder what else can be done with this sub-genre? Unless you can come up with something completely original within this setting, there’s no use in making another. Could be worth mining the brain and experiences of Astro and Aquanaut Garrett Reisman. Not many humans have lived for a time in both space and on the seabed.

Scream Factory released a Blu-ray in 2014, and Leviathan is also available to stream on Tubi.