The goofiest VHS horrors seem to always be occupational-based: “The Dentist”, “The Ice Cream Man”, and now, “The Carpenter”.

A formerly institutionalized woman moves to the country with her cheating husband and begins renovating their dream home, but she finds the former, murderous owner hasn’t vacated his own dream of finishing the house. Let’s dig into 1988’s “The Carpenter”, directed by David Wellington!

You have to love the wild west nature of late eighties horror. The financial path that Pizza Face and the Goalie laid down made it seem like anyone could step in with some wall street winnings and fund a horror movie based on absurd ideas while walking away with a 30x profit.

For their foolishness, we are eternally rewarded with bananas films that take inane ideas, drop them into a previously successful formula, and cross their fingers. You have a fifty/fifty shot of either having fun or rolling your eyes enough to give yourself a headache.

This one leans heavily towards the latter, but it has its moments. The convoluted story gets in the way, but Wings Hauser (The Carpenter) is endearing in a psychotic way. Even when Alice dreams about him packing a power drill in his pants, you still pull for the two of them to spark a romance.

We’re almost rewarded. But, of course, there has to be some climax. And the one they chose to go with was to tie the Carpenter’s survival to the wellness of the house. Once Alice turns on him, she starts demolishing his hard work.

An unheralded full burn closes out the film abruptly and leaves you feeling sorry for the stuntman and hopeful that he got paid appropriately.

Wings Hauser is back again. He has been in two previous Digs: Pale Blood and Mutant.

I’ll cut up the story choices a bit. I get they wanted a cheating husband element to the story, but Alice was moving on emotionally and falling in love with a ghost. It wasn’t even the killing of her husband which turned her against her new lover, so what’s the point of her killing a pregnant woman? 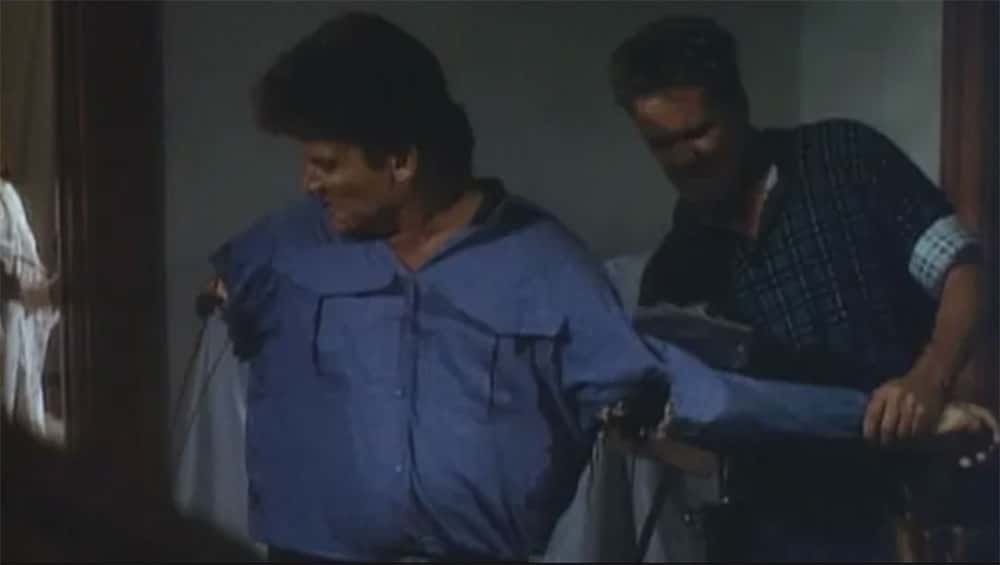 I always loved big elaborate title sequences or opening image scenes. Like the fire and gasoline opening in Lethal Weapon 3. This one tickled my pickle, shooting a circular saw in a studio with ominous lighting. It was a promise they made, showing the gun in the first act. Though they fired that “gun” well before the third act, at least they followed through by cutting off someone’s arms with that same saw.

I expected many more workplace-related injury gags. There are so many construction tools they could have played with, and it was the right era to achieve all of that practically. So, if you present me with a goofball horror comedy — with the Carpenter having a sense of humor akin to old Fred Krueger — and promise me at least a baker’s dozen of kills with different tools, I’m on board.

You can watch it on Amazon through a Full Moon Features subscription, but it’s listed under the title The House of Her Dreams. It’s also available to stream on Tubi under The Carpenter.