Digital Dismemberment: The Beyond 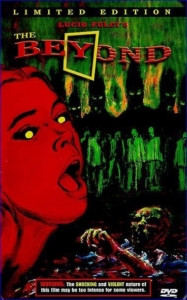 A young woman inherits an old hotel in Louisiana where after a series of supernatural ‘accidents’, she learns that the building was built over one of the entrances to Hell. 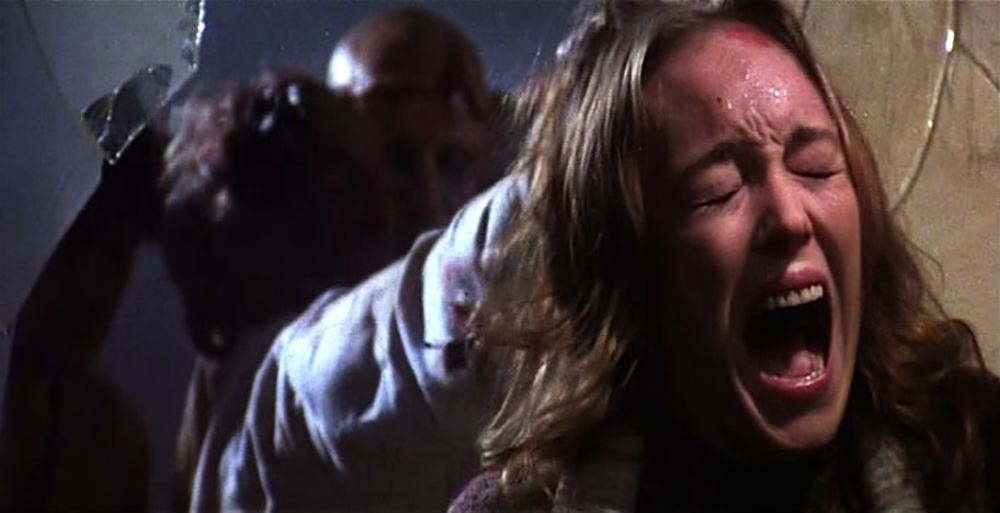 While it can be argued who the greatest zombie film director is and what the best zombie film ever made was, the answer to me is simply Lucio Fulci and his masterpiece film The Beyond. With breathtaking cinematography by Sergio Salvati and haunting music written by Fabio Frizzi, Fulci’s gothic vision of zombies goes to a level that few directors have reached since. 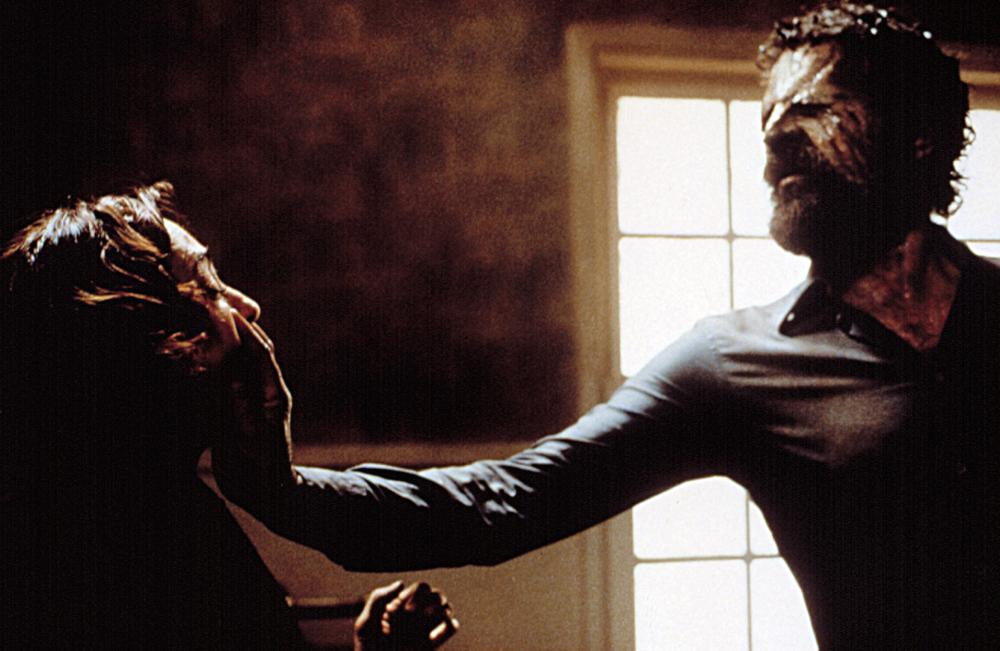 While Fulci’s zombies walk the realm of the living, they also have the ability to phase in out of our reality at will — making them even more of a threat than normal. The locations primarily take place in Louisiana with some studio work in Rome, but the locations in Louisiana REALLY become a character in their own right (again, this is due to the fantastic cinmatography of Salvati). You can almost feel the oppressive summer heat both day and night while watching, but at the same time you almost feel wet during the basement scenes and a clinical sterilness during the hospital scenes.

While Fulci makes the atmosphere thick, let us not forget that the legendary Giannetto De Rossi handles the zombie and gore FX like no other (more on that below). Couple all of that with fantastic acting from Catriona MacColl and David Warbeck as the hapless protagonists as well as Cinzia Monreale, Antoine Saint-John and  Al Cliver in supporting roles, and you have a film that sets a standard that has not been matched to date.

An inherited hotel is basically sitting above one of the seven gates of hell. Liza (McColl) decides she wants to open it back up, but strange people and things begin happening around her and the hotel. John (Warbeck) is a local doctor she meets, and they start to confide in one another. As Liza searches the hotel, she finds the corpse of Scweik (Flees) nailed to the wall in a bathroom with the portal to Hell swirling around them. She tells John about Emily (Keller), a local girl who seems to know the history of the hotel and the events that led to the portal being at the hotel.

John tells her Eliza is not real and Liza fears she may be going crazy. More people connected to Liza start to die in horrifying ways, and then the zombies begin their slow rampage. John and Liza head to the hospital but find it overrun by zombies. They narrowly escape back to the hotel, but upon descending into the basement, they emerge into The Beyond and the bleak vastness of it all.

People start dying about one minute into the movie, and it just keeps going from there. You get people being whipped with chains, crucified to walls, acid thrown on them, eyeballs being gouged and poked out, animals ripping the throats out of their owners — just everything that you could ask for. There’s no nudity, which is kind of a surprise, but the movie really does not need it anyway. Some of the effects are really chilling to watch, including one that involves tarantulas that will freak you out. The music and set pieces are perfect.

Giannetto De Rossi brought the goods when it came to the FX in THE BEYOND. The true gems are a chain whipping across the face, shoulder, leg and waist; a crucification with nails through the wrists; acid to the face multiple times with melting flesh; a fall off of a scaffold; a hand to the face with an eyeball being popped out; a torn up face vomiting chunks; a corpse rising up out of the water; stitching up of a corpse; more acid to the face; another corpse nailed to the wall; a fall off of the ladder and breaking a back; tarantulas biting face, lips, tongue, nose and eyes; a nail through the back of the head and popping an eyeball out; a throat bitten out by a dog and then gnawing off an ear; a zombie is attacked by a dog; multiple gun shots to the body; 7 assorted gun shots to the head; a shattered window throwing shards of glass into someone’s face and a exploding gunshot blast to the head with a tremendous amount of grue!

If you even remotely like the sight of blood and gore, get this flick!! The Beyond may be one of the greatest zombie genre films of all time. Lucio pulls out all of the stops and his eyes find the most interesting places to film.

U.S. Re-Release Trailer: This is a beautifully remastered and Letterboxed trailer that was done by Rolling Thunder Pictures. Crystal clear picture and audio. Runs 1 minute and 25 seconds.

International Theatrical Trailer: Letterboxed with a very clear picture and sound. This trailer is much more graphic than the American version and runs 3 minutes 24 seconds.

German Theatrical Trailer: This one is also Letterboxed, but the picture is grainier and the sound is not quite as sharp. Again, more graphic than the American version and runs 3 minutes 18 seconds.

“Images from The Beyond”: This featurette runs 5 minutes and 25 seconds. They show lots (over 100) of assorted stills from the film in black and white and color. They also include poster art from various countries. The coolest addition is showing the various versions of the soundtrack with various cd art!

“Filming The Beyond”: This featurette runs 1 min 26 seconds. This section shows various production and behind the scenes still in color and black and white, many which include Lucio. There are also assorted single pics of the actors and film crew.

“Catriona MacColl and David Warbeck Interview”: This featurette runs 1 minute. This is an old interview that took place three years after the film’s release. Nothing really big is discussed here other than they were surprised how big the film got.

“David Warbeck Superstar”: This featurette runs 2 minutes 20 seconds. This includes different photo stills from assorted films he has been in and his personal life. There is also a small interview where he discusses the filming of The Beyond and he speaks very fondly of Lucio. States that he thinks that these types of films are important because they show the dark side of us. Goes on to say that it is all in how we control it.

“Lucio Fulci The Maestro”: This featurette runs 3 minutes 9 seconds. This one starts off with different stills of his films. They also show segments of him filming “Demonia”. There is a small interview here, but the quality is poor video. He talks about his health and various film projects. They show his boating trophies and various film awards that he has won over the years. What is really neat are some of the press clippings and magazines that he has been in. At the end, they show a tribute to Lucio that reads “Lucio Fulci. Godfather of Gore. 1927-1996.” 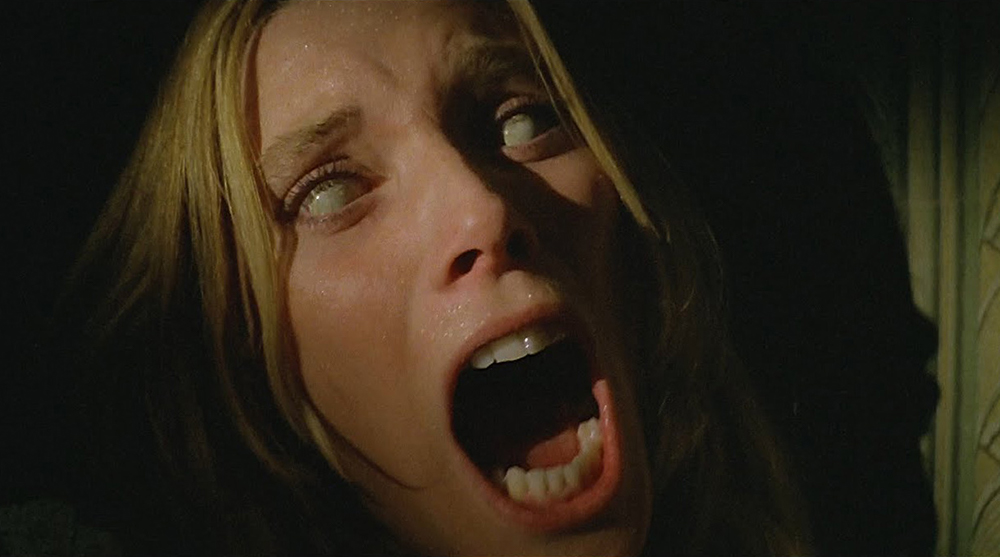 “Lucio Fulci and David Warbeck at Eurofest 94″: This featurette runs 3 minutes. They show various ads for the convention. A packed house asks questions of Lucio and David. They both make jokes and discuss their films, but you can really tell by this point that Lucio is sick. At the end it says “Dedicated to the memory of David Warbeck and Lucio Fulci.”

German Color Pre-Credit Sequence: This is the opening sequence of the film in color instead of the washed out brown and grey. It is letterboxed and looks magnificent. It runs 8 minutes and 20 seconds. It can be watched in English or German.

Necrophagia Music Video “And you will live in Terror”: This music video runs 5 minutes 18 seconds. They show scenes from the movie mixed in with several live scenes of the band playing. The song is based off of the movie and is Death/Black metal. Most of the scenes incorporate gore from the movie. Very entertaining.

Limited Edition Collectors Tin: Limited to 20,000 copies and is a welcome addition to any collectors stock!

Audio Set-Up: Dolby Digital English 5.1; Dolby Stereo English 2.0; Original Mono Soundtrack; Italian Mono Soundtrack; English Subtitles and Commentary with stars David Warbeck and Catriona MacColl. This movie boasts tremendous sound quality. If you do not own a home theatre system, this movie is made to make you go buy one! The commentary is very entertaining and covers a wide base of topics, such as Fulci’s various filming techniques, how much fun Italian films are to make, their emotions during filming, Lucio’s fits and temper, how some of the cast spoke different languages, how real the special effects looked and the quality of the movie, that there should be more films like this made, and their high fondness of Lucio. You should take the time to listen to this when you get the chance. You really find out alot about the filming process and how masterful Lucio was. Top notch quality.

Easter Eggs: Hidden trailer: Enter the “Images from the Beyond” screen and highlight the “Menu” option. Press Left to highlight the Eibon symbol. Press Enter to view a trailer from Cat In The Brain.

Overall, The Beyond is just a really great flick. It is a shame that Fulci is no longer with us, because I believe he could show some of these young Hollywood directors a thing or two. If you’ve never experienced this film, it’s definitely one that should be on your must watch list. For fans of The Beyond, this special edition is more than worth the investment. You may be able to find the Limited Edition Tin on E-bay or another online auction site. It may cost you a little, but trust me, it is worth it! Anything and everything you could want in a collectible is included in this set.

Thanks must be given to Quentin Tarantino for showing his love for The Beyond and bringing it to the midnight showings so that a younger generation could discover it!