The Films of F Street: The Horrible House on the Hill (1974)

A satisfying slasher with a memorable ending, made scarier by the fact that the evil-doers are creepy kids who delight in creative kills. 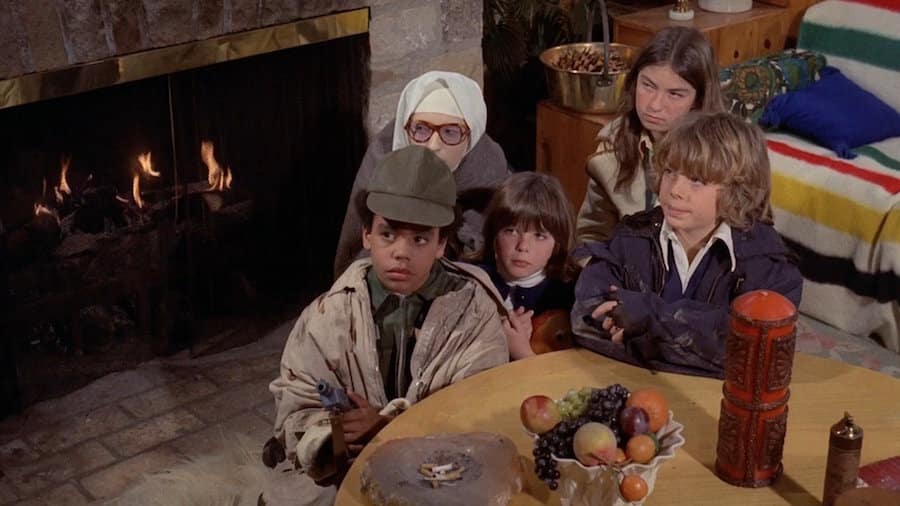 A while back, I wrote about creepy kids in horror. They are a longstanding trope of the genre that dates back decades. Why have they been around for so long? A person does not have to think too hard before landing on a movie with a kid that freaked them out.

It was not long before filmmakers realized that if one child worked at scaring audiences, then a whole group of them would be really terrifying.

But would that same formula work if the group was comprised of an on-the-rise teen idol with a penchant for cross-dressing, a pyromaniac who looks like a hippie, the teen idol’s real-life sister, a kid who likes to play army, and a nun that looks like Pee-Wee Herman?

The Horrible House on the Hill (also known as Devil Times Five and People Toys) is a 1974 slasher about four kids who are being taken to (or from; the movie is never clear on this) a psychiatric hospital. When the van crashes, the children along with a mysterious nun head off to look for shelter. They soon come across a chalet occupied by a group of materialistic vacationers.

Most slashers are not known for their deep themes — especially ones from the early 70s when the subgenre still did not exist. 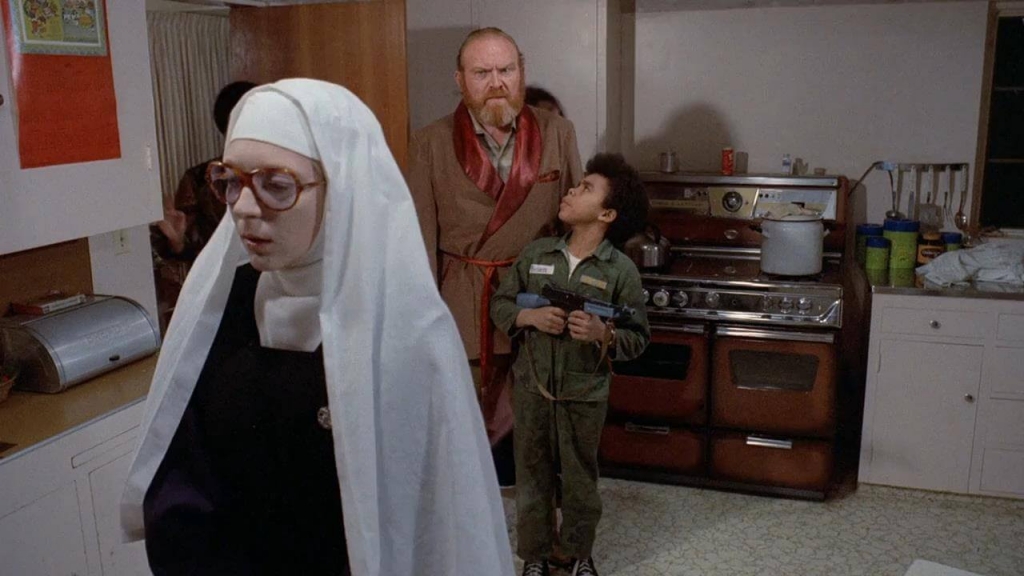 The Horrible House on the Hill seems to have all the ingredients to tackle some deep ideas, however. The importance of money, religion and personal responsibility all seem like no brainers for the plot.

The majority of the characters in The Horrible House on the Hill are shallow, but aside from that, there is little depth to the story. This is a straightforward slasher, with the only difference being the killers are a quartet of homicidal children.

This points out how important simplicity is in horror. Sometimes all you need is are crazy villains and some cannon fodder that deserves everything they get. (There is one notable exception.)

The Horrible House on the Hill does not have anything deep to say and it does not pretend that it does.

Instead, it is all about the kills.

The House on Horrible Hill is something of a precursor to the movies of the next decade. 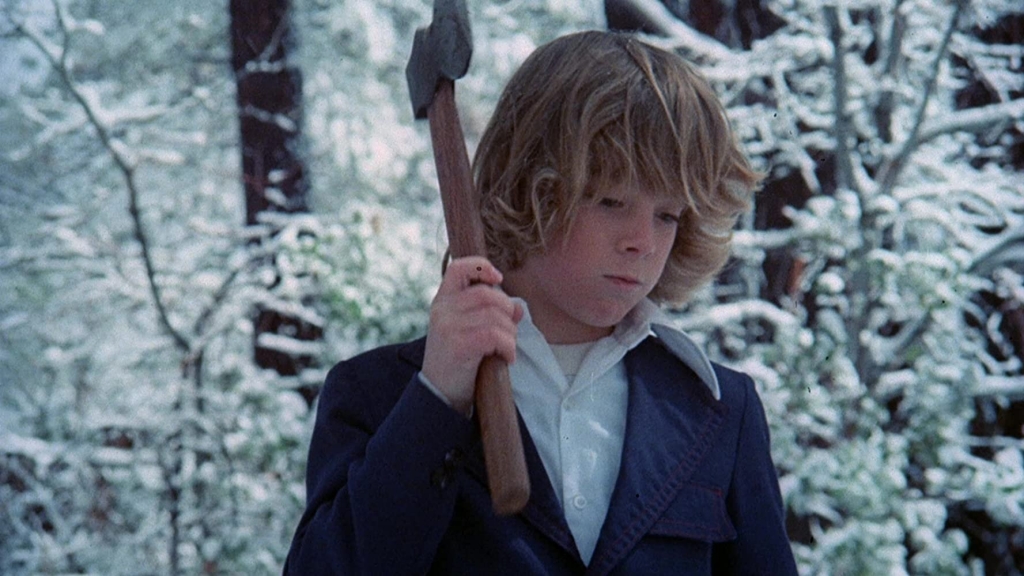 The kills are creative, involving Home Alone-type setups and piranha (pronounced by a character as “peer-yanna”) in bathtubs.

The idea of the killers picking off their victims one by one was already being done in giallo, but had not yet crossed over to America. Calling it ahead of its time may be a little much, but it was certainly different than most of the domestic cinema of the time.

This also includes scenes that were part of a troubling trend in 70s genre films.

Mentally disabled characters are no stranger to fiction, but in horror films of the decade, they were often demeaned on-screen while serving as comic relief.

Much like I Spit On Your Grave, The Horrible House on the Hill has a scene in which a mentally disabled character named Ralph becomes the butt of a joke for not having been with a woman. While there is not the same homophobia seen in the rape-revenge film, Ralph is there for the audience to laugh at. When the kids end up killing him with an elaborate trap, there is a sense of pity and inevitability.

The other deaths do not pose the same issues. 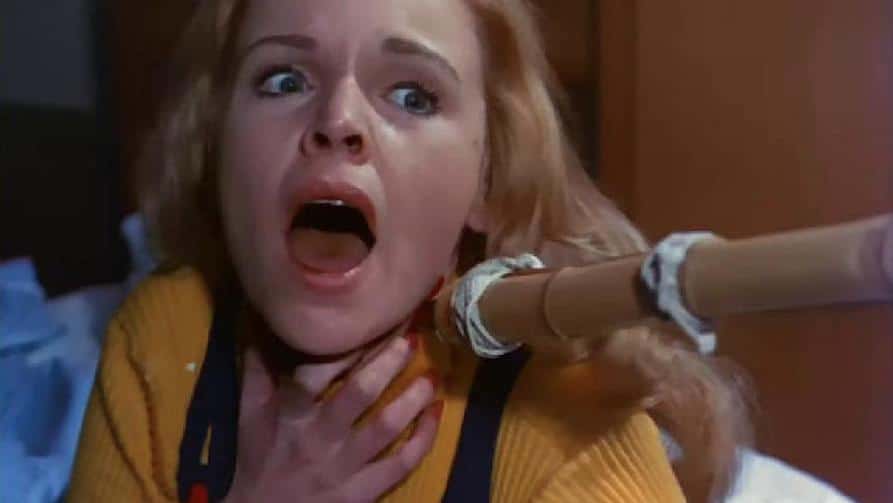 Everyone seems to hate each other and is obsessed with money, prestige, and possessions. While there are some glimpses that show they are not entirely bad people, these moments seem to be added just so the killer kids do not seem like heroes.

As bad as the victims are, they are not the kind of evil characters who deserve to be murdered. They are a shallow group that happens to be at the wrong place at the wrong time. The children are also genuinely scary. There are some laughs to be had, but this group is sadistic.

Everything culminates in a shocking ending.

As The Horrible House on the Hill progresses, the kids succeed in taking out each guest. There is never a moment when there is a chance of them being stopped. The movie had seemingly written itself into a corner. Either the bad guys have to win or children have to die, neither of which was common in movies of the era.

The final moments provide enough of a sense of closure while still catching those watching off guard.

The Horrible House on the Hill is available to stream on Shudder.