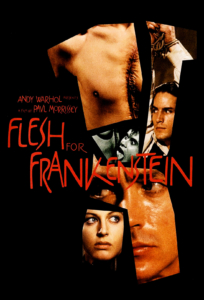 Synopsis: Baron Von Frankenstein is obsessed with creating the perfect race subservient to him only and he hopes to achieve this with a male and female zombie that will produce children for him. Having failed so far, The Baron and his goofy assistant Otto, go on the hunt for a suitably virile male in the local bordello and accidentally choose the wrong man, instead picking one that is subtly homosexual. As a side plot, we have the Baron’s wife (who happens to be his sister as well), employing the local horny farm hand as her personal servant to satisfy her ‘personal needs’, but he finds himself a little more involved that first thought. In this film, sex comes together with surgery in a way you would never have thought possible.

Killer Line: To know death, Otto, you have to fuck life in the gall bladder!

With oodles of bad dialogue, over-acting, crazy accents and zombie shagging, Flesh For Frankenstein is a video nasty destined for the annals of cult horror-comedy. It’s the first on my list of video nasties to be reviewed and it was largely entertaining albeit a little dragging in places. It was produced by Andy Warhol and directed by Paul Morrisey who straight after filming this, went on to direct a sister film by the name of “Blood for Dracula” with the Baron playing a lead in that film as well.

Flesh for Frankenstein was originally made to be seen in 3D and unfortunately, I didn’t have that chance! I can imagine that having guts thrust toward you through the screen is great fun and is definitely an opportunity missed out on. Now this film is full to the brim with terrible dialogue and it might have been salvaged a little if it were delivered better. Joe Dallesandro especially (horny farmhand) was like a zombie himself in his delivery and Katrin, the Baroness, is over the top in her portrayal of a Serbian aristocrat which is actually very enjoyable. The standout in the film is the Baron, played delightfully by Udo Kier. He’s brilliantly deranged yet clever and his delivery of his lines is fabulous.

…but what we really need now, is the perfect nasum.

Mixing sex together with surgery in the way this film does is so bizarre and having it off with your zombie on a medical table is a new one on me. This film makes it seem perfectly acceptable to ask your man-servant for help to get off the surgical table you just humped your medical experiment on, ah why not.

The sets, particularly the laboratory  and countryside locations are lovely and really allow Morrisey to set the tone of aristocracy gone mad. As the film started, it reminded me of the old Hammer films such as the Dracula films & Twins of Evil(1971) due to locations such as the castle and the local town being used. The occasional piece of music also brought back Hammer memories, but the majority of the soundtrack is forgettable, the only noticeable piece is played when the Baron and adoring Otto stalk a man whose head they wish to stick on to their zombie. It certainly comes across as a Hammer type spoof and with the lines being delivered with utter seriousness it only adds to the goof element. The production value is pretty high and the cheapness of the practical effects has  been done on purpose to improve the 3D gore value when guts were thrust in to the audience’s face. It’s done to great effect and it is a truly enjoyable film.

As for the film’s video nasty status, I can see that the combination of necrophilia and gore would have made it a shocker back in the day, though the shock value has waned and the comedic elements shine through a hell of a lot more in modern times. Make no mistake, this is a fucked up Frankenstein film that bears no resemblance to past films or the book apart from the assembly of body parts. It’s a big ball of goof that will entertain you for most of it’s 93 minute run time and the director’s cut is available to watch on YouTube if you don’t want to shell out the precious pennies on the Blu-ray.