“Children of Sin” is an atmospheric and timely throwback slasher featuring a demented villain and a great cast. 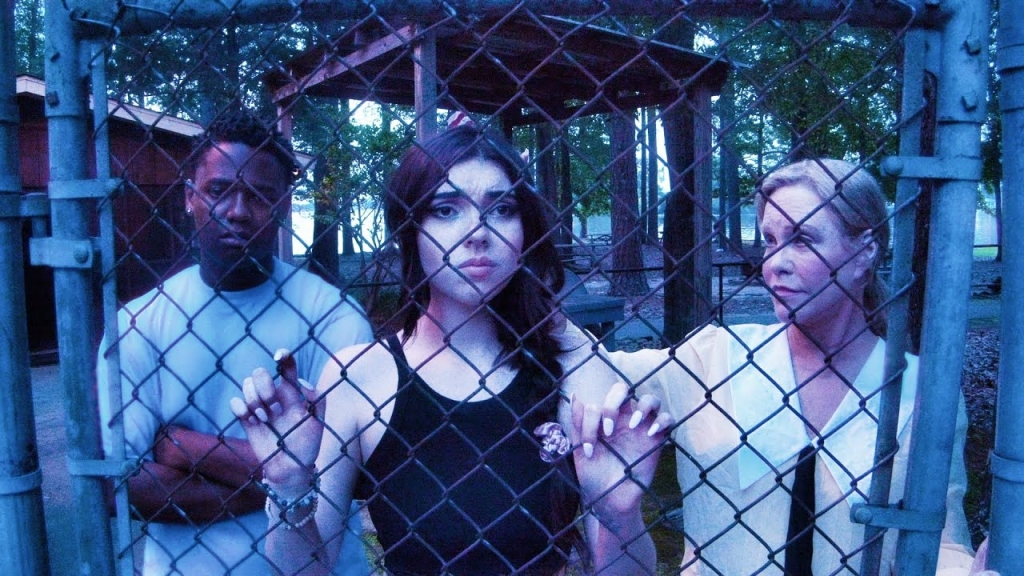 It’s easy to see why one audience member at the sold-out premiere of Children of Sin in Madison, Mississippi said he was still thinking about the film even weeks after seeing it.

It’s also easy to see why the crowd was reportedly an enthusiastic one, engaging with the film by cheering and clapping when a certain something happens to a loathsome character (remaining vague to avoid spoilers).

It simply comes down to this: writer-director Chris Moore not only knows how to construct a fast-moving and entertaining film, but he also knows how to pay homage to films of the past by creating the proper atmosphere on all levels.

Interpreting his religion in twisted ways, an evil stepfather named Robbie sends his two stepchildren, Jackson and Emma, to a religious retreat in an attempt to “cure” them of their wicked ways (one is pregnant, the other gay).

The stepfather (Jeff Buchwald) is cartoonishly played, but in a way that serves the film. Think Aunt Martha in 1983’s Sleepaway Camp: eccentric but in a damaged and oblivious, self-important way.

There’s satire at play here, and Buchwald’s performance aims at the hypocrisy of self-righteous individuals who hide their own sins while loudly calling out the sins of others.

On the other hand, the mother of the two kids, Tammy (Keni Bounds), comes across as more of an even-keeled, level-headed character.

But she also appears to be a bit brainwashed, forgiving her husband’s severe and controlling nature simply because he took in her and her two kids. However, Robbie’s ultimate motivations for doing so just may not be as pure as Tammy likes to think they are. And Robbie’s plan to send her two kids, Emma and Jackson, to the secretly sinister Abraham House in an effort to save their souls, is an indication of his nefarious mindset.

“I never have a homosexual thought,” boasts Hank (Chris Moore), an assistant who works at the Abraham House.

Of course, just at that moment, Hank sees the gardener, a handsome young man with whom he has a clear history, bending over to cut down some weeds. His gaze lingers as the camera pans up the gardener’s body, hard at work tending to the landscape. It’s a sad shot for several reasons, but the timing of it also invokes a quick, intended laugh.

Moore doesn’t shy away from finding the dark humor in his serious subject matter, even if it’s found in the struggle one man has with his own identity.

As with Hank, Moore also shows the inner struggle of Jackson (Lewis Hines) as he goes back and forth between accepting and denying his own gayness.

The characters of Hank and Jackson aren’t totally convinced that it’s the lifestyle they want. But they also know that it’s the lifestyle they lead, and no amount of denial will change that. Or the heinous actions that take place at The Abraham House, for that matter.

The character of Emma in Children of Sin may not be as strong of a role for actress Meredith Mohler as Callee was in Chris Moore’s excellent Triggered (2019), but Mohler once again turns in a fantastic performance.

Her apathetic, live and let live attitude mixed with the naive trust found in young people create an antagonist that is equally likable and frustrating. Every decision she makes or goes along with elicits a “no, don’t do that!” reaction, a surefire sign that this is a character worth caring about.

But Emma is also observant, and once her eyes start to open to the possible horrors taking place at The Abraham House, we’re completely on board to join her fight. Mohler has that natural ability to get audiences to care about whatever character she plays, a talent that serves her extremely well in Children of Sin. Simply put, Meredith Mohler rocks.

“3 days without algebra. Who can turn that down,” Emma jokes about staying at The Abraham House.

But the evil that takes place there at the hands of owner Mary Esther (Jo-Ann Robinson), quickly takes away Emma’s sarcastic sense of humor.

Children of Sin lets the blood fly when the time comes, including an impressive (and cringe-inducing) shot of a butcher knife hitting a hand. These gruesome special effects shots don’t happen as often as you’d like, but they certainly look great when they do.

Robinson’s devilish and frightening Mary Esther makes for a demented and fun villain in the meantime.

Her malevolent nature is amplified by strategically lit backgrounds that give the foreground an eerie appearance. Moore’s films always succeed at creating impactful mysterious atmospheres (check out 2019’s A Stranger Among the Living). Furthering the dark secrets of The Abraham House is a gloomy and mysterious score that blends the feeling of a 1980s slasher flick and a ’70s Giallo film.

With serious topics presented through a twisted, melodramatic tone, CHILDREN OF SIN has all the exaggeration and charm of a 1980s made-for-TV thriller. It’s grainy and saturated, funny and dark, and gruesome — a throwback slasher with a societal message.

The music, the lighting, the camera placement, and even a little slow motion, all work to conjure up those horror movies we all grew up watching in the days of VHS and cable TV.

Children of Sin is available to rent now on Amazon Video.