Mad Monster Returns: Conning in the World of Covid

I always put my money where my mouth is, and this time I put my real world fears aside and invested in the future of horror and in the community I love. 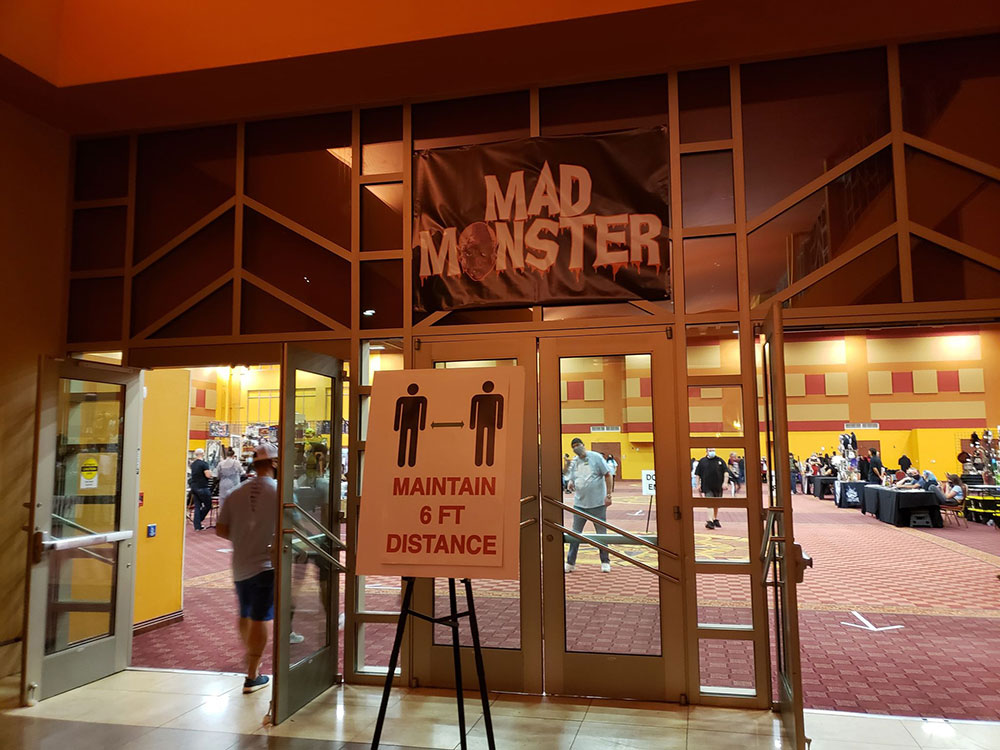 Will it still even happen? When? Is it going to be safe? What guests will still go? If I die of COVID, who’s gonna answer my creditors phone calls and those text messages asking if I’m registered to vote?

All these questions anymore have been running through my head for months in concerns to the Mad Monster event happening in Arizona for 2020. I had purchased tickets before the pandemic apocalypse had struck. So, it’s been a long waiting game since this whole weirdness started, and since the originally scheduled for May convention had been postponed.

At a certain point, I was pretty sure the event was just going to be cancelled. Even if it did happen, I doubted I would attend. Months passed by, Blu-ray’s were watched, and various avenues in my career were closed down and burned like a metaphorical NON-peaceful protest against me.

Eventually, Mad Monster was rescheduled for October, with various guests backing out and being replaced by others. In the end, the highly anticipated event did end up happening… with me in attendance. 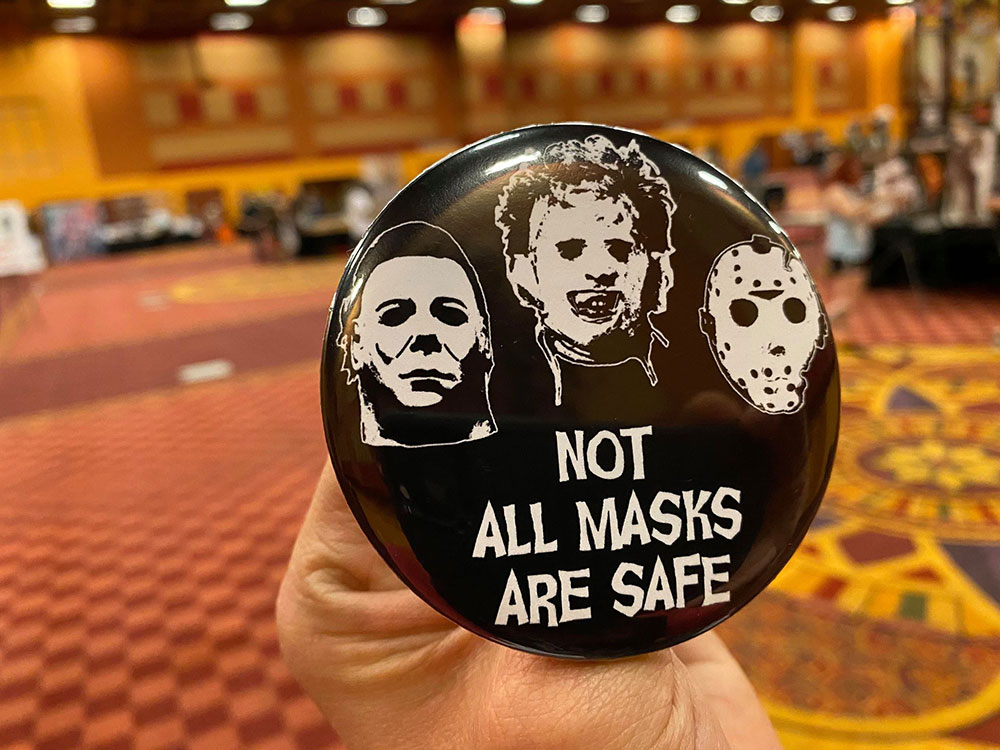 So what changed for me? Well, it was pretty much one announcement that convinced me to throw caution to the wind and attend. For the first time, Felissa Rose (yes, Angela herself), was going to do a (socially distanced via plexiglass) photo op based on the surprise ending of 80’s Schl-Oscar winning slasher Sleepaway Camp.

That’s it. That’s all it took for me to put it all on the line to find out what a con in the world of COVID felt like. No wonder that goth goddess in my high school history class was always able to get me to write all those papers for her.

Now, I was willing to walk away from the event if I ever felt safe or compromised, but I was gonna get my photo op with Felissa Rose (with a side of celluloid penis) no matter what.

Here’s the deal, though: I couldn’t have come away happier with how they handled things. 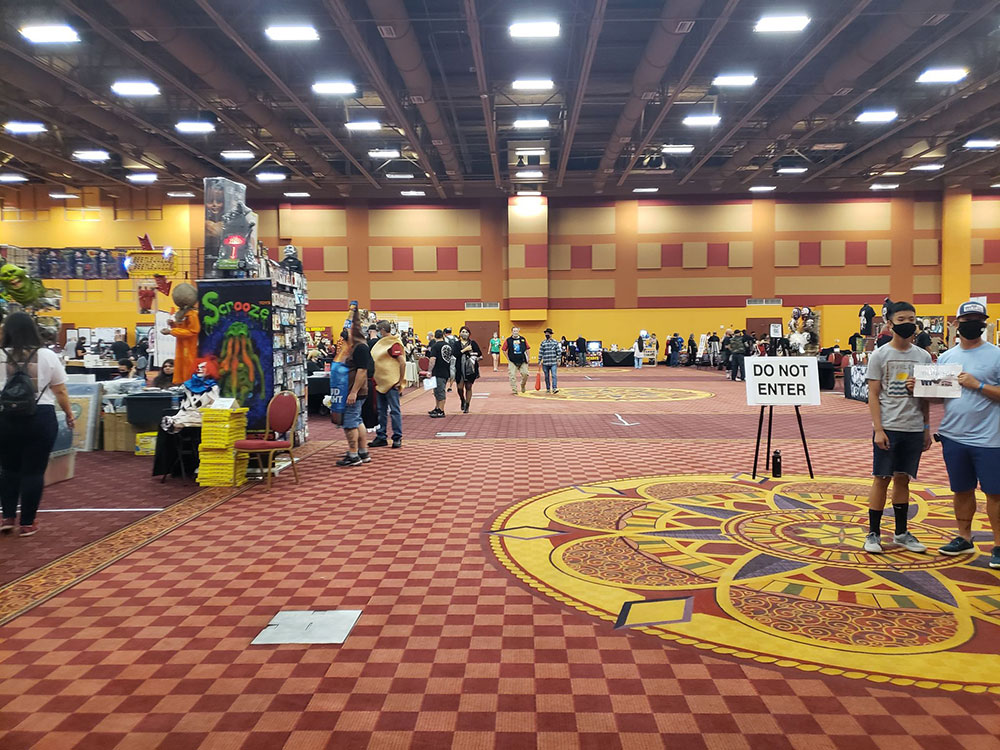 First, the Mad Monster event here in Arizona moved to a new location for the first time in several years. It’s a much larger and more spacious venue, great for the growing horror scene here. This change was planned prior to COVID, but the move worked out perfectly during a time when we all need to be more socially distanced. To keep guests as safe as possible, temp checks were given every time anyone entered or re-entered the convention space. Arrows on the floor and Mad Monster volunteers made sure all exhibitor hall traffic went in the same direction.

Speaking of that, the vendors were far spread out and distanced from one another. Panels were in large conference rooms, and once again volunteers made sure everyone had at least three seats between them and next attendee or group. Microphones were wiped down between each use, and of course masks were required at all times except when eating or drinking.

A couple of the guests did ask to take off masks for quick pics with them, and some weren’t willing to take any pics at all or sign random items. It was up to each one, and that was fine with me. After hanging with Felissa Rose for a bit, for instance, I couldn’t wait for a fun group pick with her (with me and my group all wearing our Camp Arawak shirts), so she could do her famous Angela face. But I wasn’t about to ask a 72-year-old American treasure, Carl Weathers, to do a Predator handshake in these weird times. I just told him I’m still waiting on that sequel to Action Jackson — cause I really am. Seriously.

To be honest, all these changes quickly began to feel completely normal, and it was just good to be a part of something even somewhat resembling a famous Mad Monster event again. 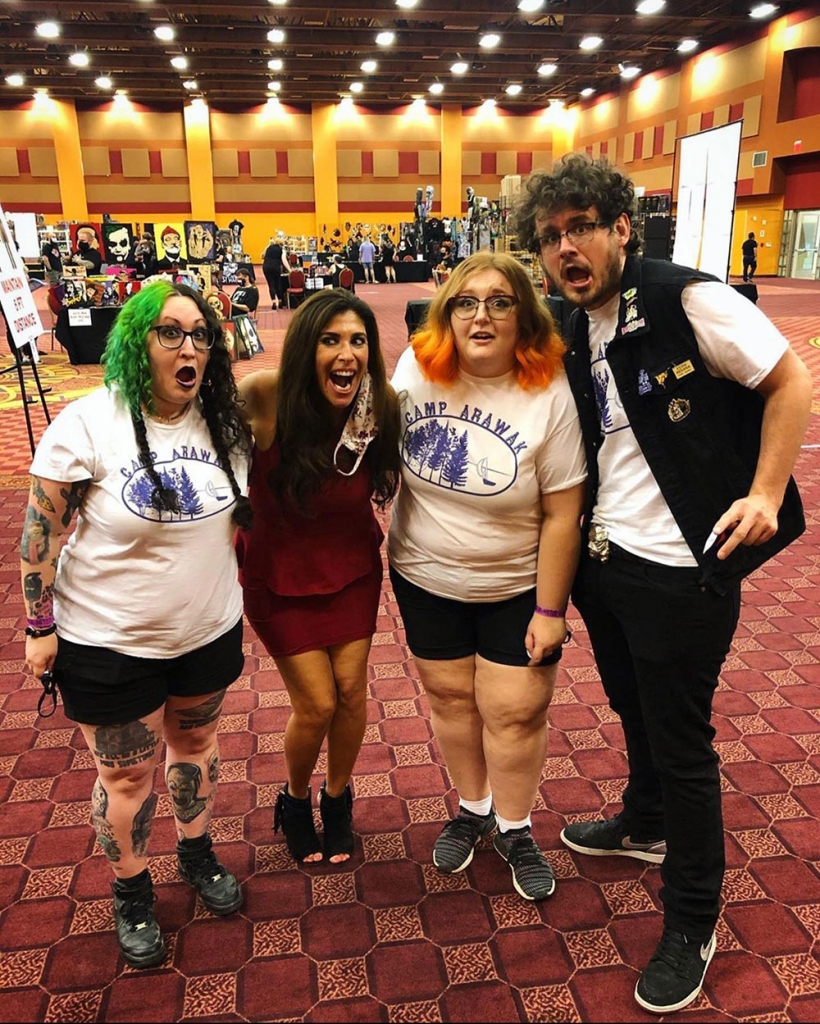 I was able to see friends I haven’t seen in 7 or 8 months — and some I haven’t seen since last year’s event. I got to spend money on vendors who create awesome stuff for Horror fans, and I got to act like an idiot doing “Werewolves of London” on stage for Skaraoke. The guests were all friendly, and the panels were informative.

These are all things we’ve enjoyed but taken for granted for so long, and 2020 has reminded us that these passions can quickly be stolen away.

The only weirdness I felt was brief when — upon initially entering the hotel or leaving the convention area to go to my room or car — I saw that the “normies” were there. These were the people that were here for reasons other than to attend Mad Monster, like some softball tournament of some sort, who kept staring at us suspiciously as we stood out like sore thumbs with our horror garb on. Suddenly, it was I that was Angela, feeling the whole camp stare at me and shouting, “Why are you so effin’ weird?!” 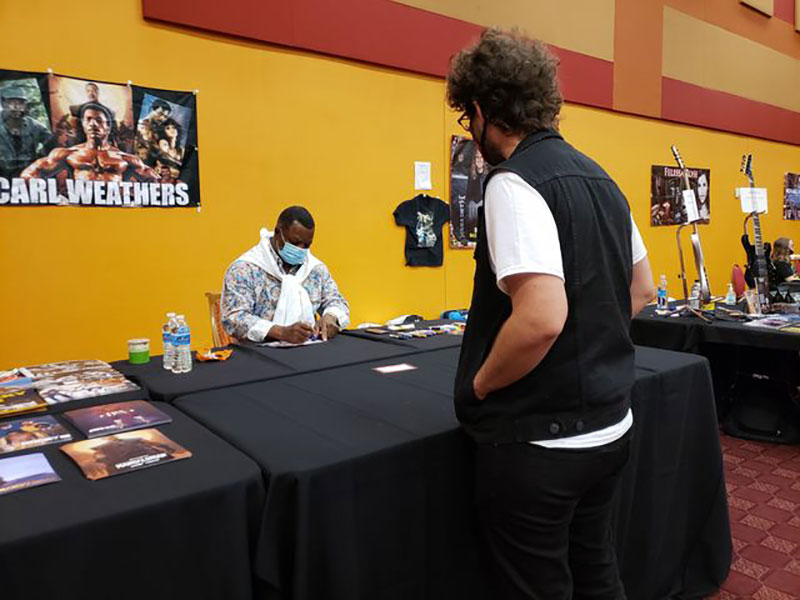 I’m sure the softball player who asked what “Redum” meant to the girl I was with (she has it tattooed on her arm) didn’t mean to come across as being completely creeped out when she explained it was from The Shining. But she definitely was creeped out, which made us temporarily feel very alone.

However, the next minute, we turn a corner and walk into the oh so sweet and kind Amelia Kinkade from Night of the Demons, letting her know our group would be watching that flick in a hotel room later that night. Minutes later, we turn another corner and Jason himself, Kane Hodder, having a drink at the bar while holding court like the genre King he is. Then, a couple in full Rocky Horror Picture Show cosplay strolled by.

No, we WEREN’T alone… far from it. The assimilated stares from the normies disappeared, just like the fears of COVID we had, slipping away as I made my way to the bar. Mad Monster was back, baby, and I promise to never take you for granted again.

PS – I miss walking past you in the hallways, Sid, as we gave each other the tall guy nod. 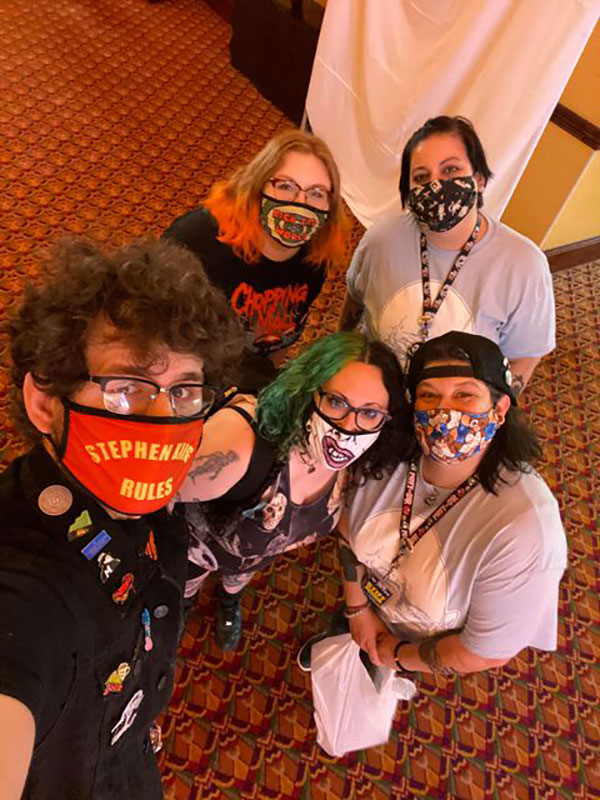