Sunday night, fans of “The Walking Dead” experienced an evening of reflection, courage, and change — and a very unexpected end to Rick Grimes. 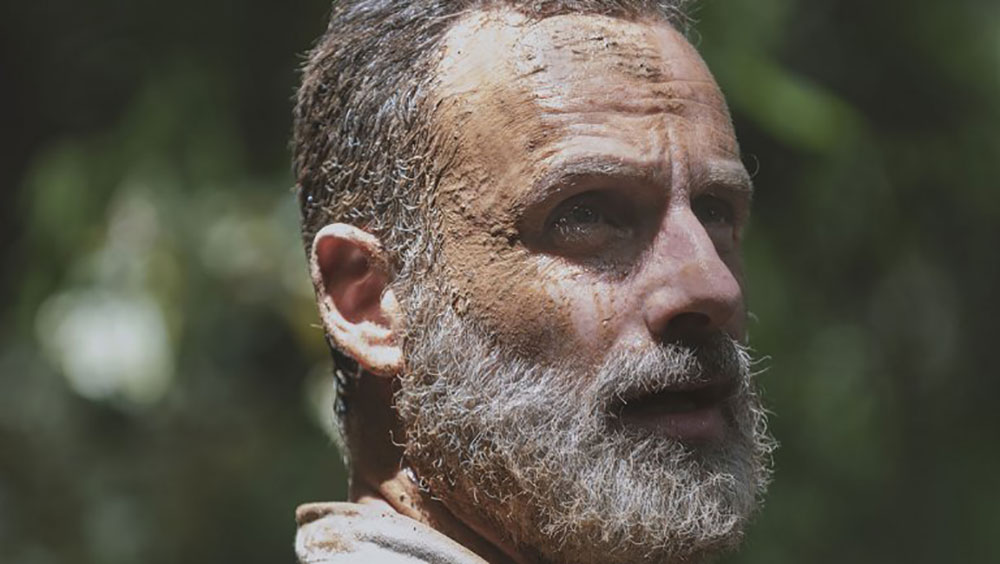 WARNING: YOU ARE NOW ENTERING HEAVY SPOILER TERRITORY. If you haven’t yet seen Season 9, Episode 5 of “The Walking Dead” — and all episodes leading up to it — please do not read the following recap unless you don’t mind significant plot spoilers.

The Walking Dead story arcs have always been defined by the location of the main survivors.  One could argue, and I’m sure many would, that the overall series can be divided into sections.  The first season was a bit random, with the group facing challenges and death in a handful of different places as they grew to know and trust each other.

Season two was all about the events that happened on Hershel’s farm.  Seasons three and four dealt with events that revolved around their new home (the abandoned prison), the town of Woodbury, and the show’s first dominant big-bad villain, The Governor.  Later in the series, the story dropped anchor and continues to alternate between two places:  a town called Alexandria and The Hilltop. 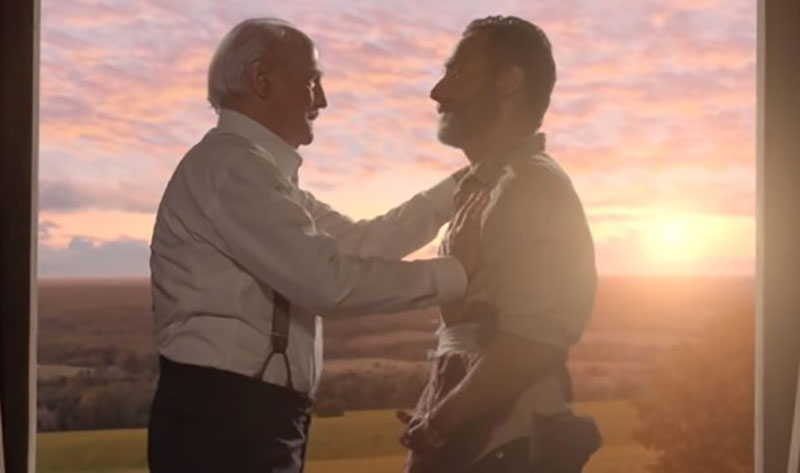 And then a new big-bad emerged:  Negan, played with infectious glee by Jeffrey Dean Morgan.

That was when everything changed.  After the death of Hershel, storylines began to pivot on the deaths of main characters.  Over the years, there had been many minor changes, but the first major evolution of the show came at the end of season six, when Negan executed two major characters: Abraham and Glenn.

While Abraham was important and well-liked, Glenn was among the most beloved characters since the series began.  He was one of the few people who didn’t occasionally operate in a “grey” area of black-and-white, good-and-bad. 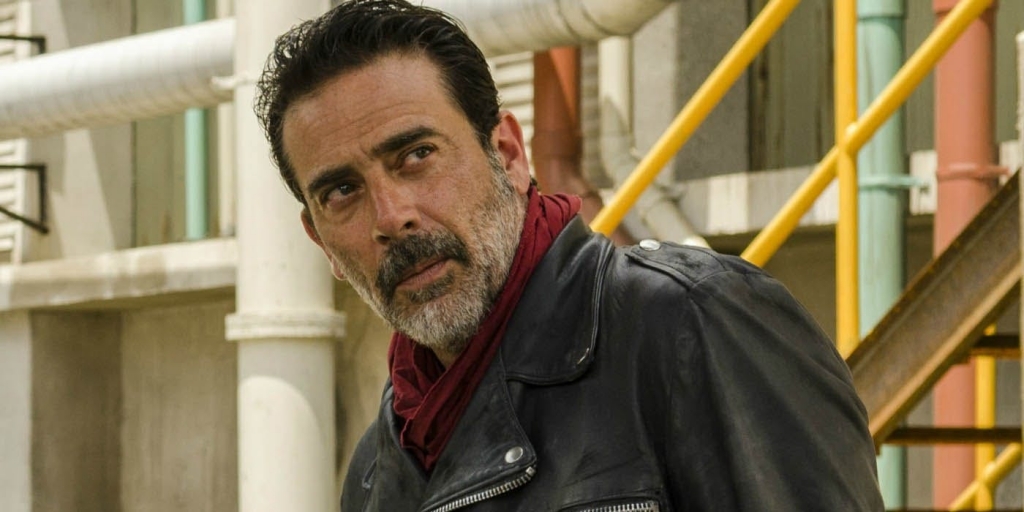 But Negan didn’t just execute Glenn.  He bashed his head into mush with a barbed-wire baseball bat.  And we saw the entire thing up close, as if the intention was to shock and devastate the audience as deeply as possible.  Many viewers did, in fact, feel personally attacked, and none of the characters were ever the same again.

But if you’re reading this, you probably know that, as well as all the other deaths and events that I neglected to mention.

With the exception of the episode featuring Carl’s death, last night marked a new emotional touchstone for the show.  It was the episode that will usher in the most creatively drastic changes yet, and it featured not one, but two significant events.  Maggie, Glenn’s widow, convinced Michonne to allow her to enter Negan’s cell and exact her revenge. 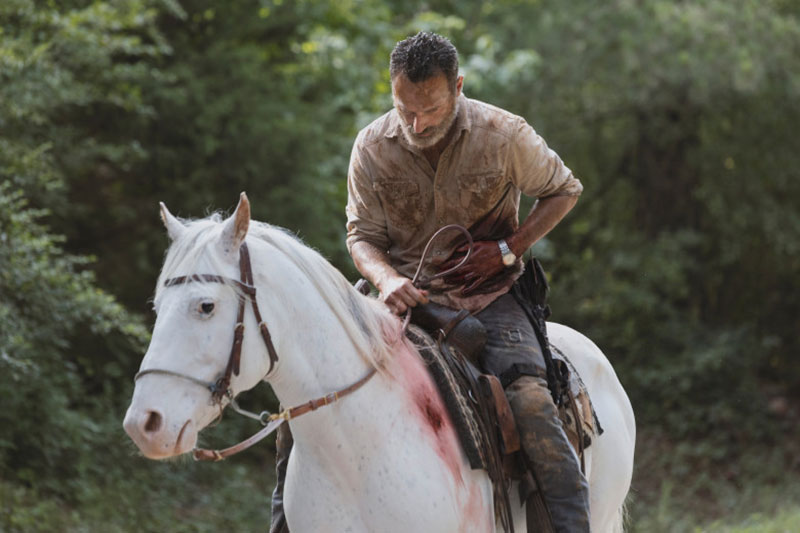 This leads me to bring up a wonderful thing about long-form dramatic storytelling: characters change and evolve right before our eyes, sometimes without even explaining what they’re thinking.  We grow with them and get to know them so well that we can read and understand their silent expressions and empathize with their plights.

I think everyone believed Maggie was going to kill Negan, including Maggie.  But Negan’s reaction to her demands for justice changed her mind.  She pulled him out of his cell, and he fell to emotional pieces.  Behind rivers of tears, he confessed that he never wanted things to turn out the way they did, and that he wanted to be dead and reunited with his wife.  His sincerity was doubtful, and he had the perfect opportunity to attempt escape, but he didn’t.  He was overcome with so much grief and regret that he could barely stand up. 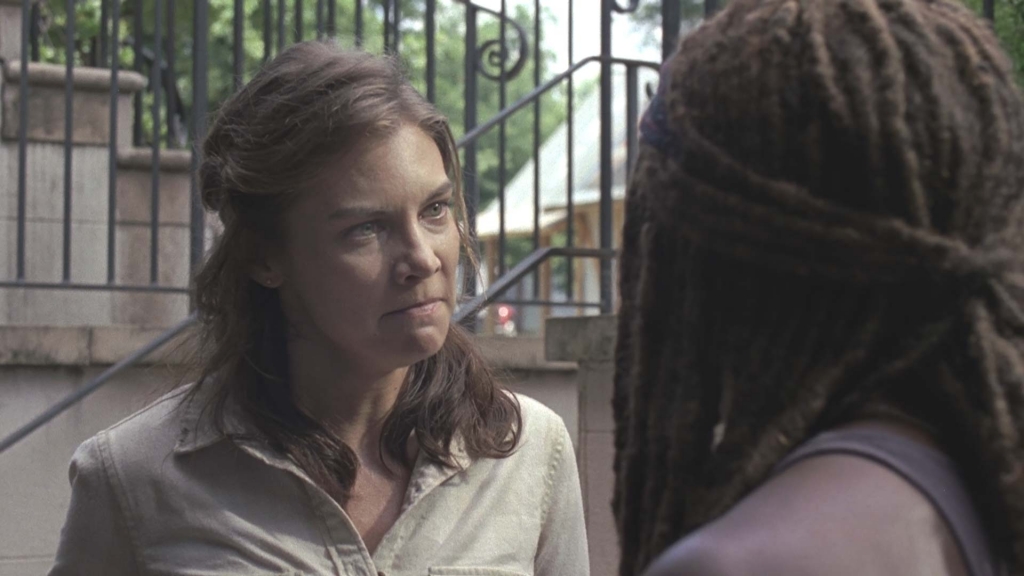 Then Maggie decided not to kill him.  I think she originally had every intention of doing so, but seeing Negan like that changed her mind.  Not out of pity, but because what she was witnessing was the living, breathing, quivering, whimpering death of Negan’s spirit.  The kind of death beating him with a crowbar wouldn’t provide her with.

She seemed satisfied, not because she broke him, but because he already was and finally showed it.  Negan showed vulnerability, and it became clear to her that staying alive, behind bars, and excluded from the life that flourished outside was the best justice possible.

If The Walking Dead has taught us one thing, it’s that nothing happens the way we expect it to. 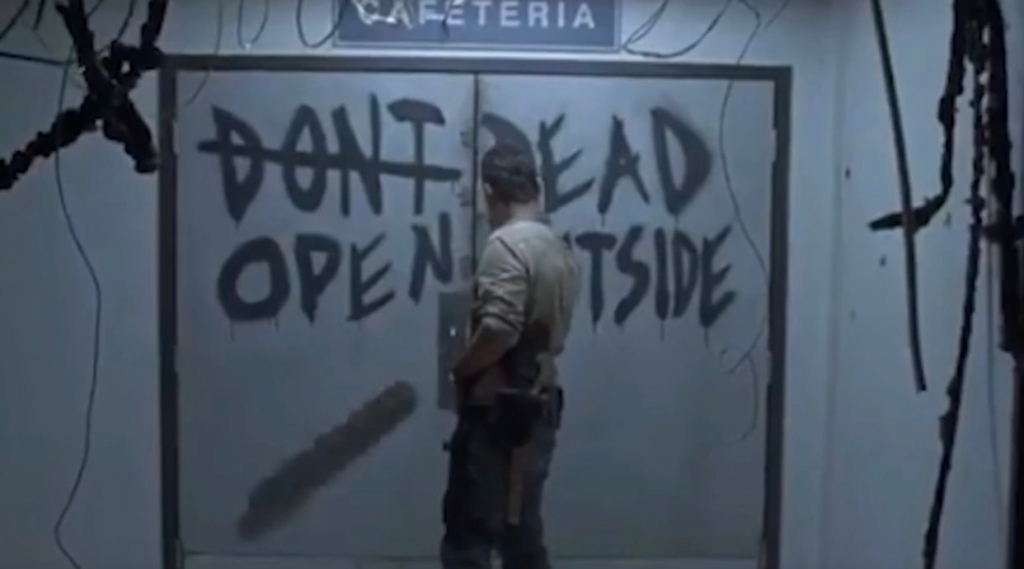 For an entire season we knew Glenn was going to die and were on the edge of our seats waiting for it to happen.  When he fell off the dumpster, we were certain it was his time to be a zombie feast.  Well, those of us who didn’t read the comic did, anyway.

When season nine was close to premiering, it was revealed that at some point during the season Andrew Lincoln, who played Rick, was leaving the show.  Looking back on it, I don’t think it was ever clearly announced that Rick was going to die.  Fans of the show (including me) just assumed that to be the case.

Rumors floated around the Internet that Jon Bernthal (Shane) was filming scenes for the show, and many people were concerned that everything would turn out to be an “it was just a dream, Rick” ending for the character. 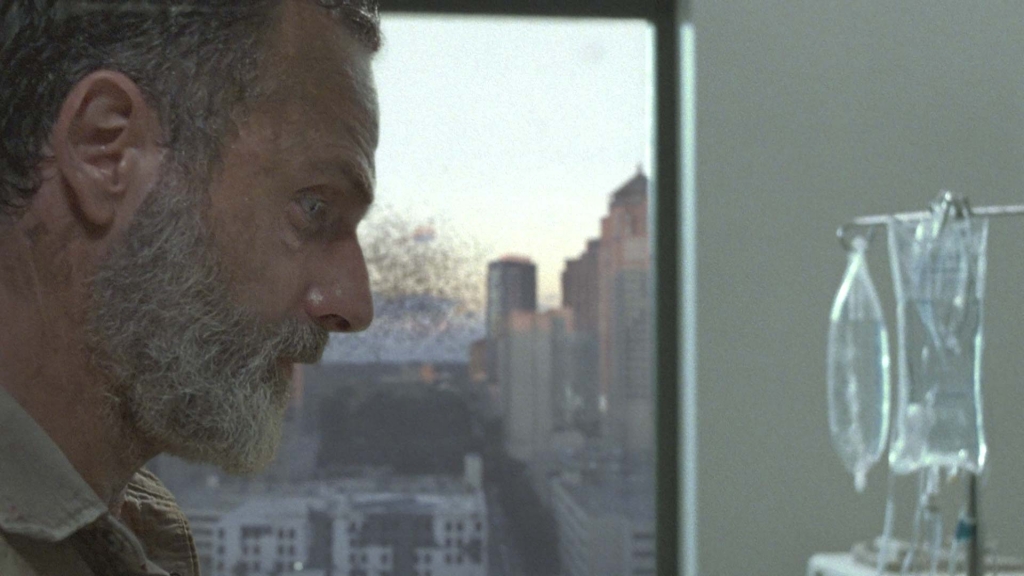 However, The Walking Dead stuck to past narrative tactics and gave viewers a very unexpected resolution to the Rick Grimes story arc, which up until last night was the primary way the story was told.  Watching the episode last night, I looked back on all the great moments of the very first episode.

That was back when Frank Darabont was still involved, and the first episode remains, in my opinion, the best episode.  There were so many moving and personal moments.  Such as the zombie in the park:  “I’m so sorry this happened to you.”

We all knew, last night, that Rick was going to survive the steel pipe.  Coming attractions from the previous week ruined any cliffhanging suspense that moment would have provided us with.  I loved the tease of waiting for the moment he finally died.  Because there were so many near-deaths and near-bites last night.  I’ll admit that I like tragic events in television shows and movies.  They make the stories more interesting and shake things up.