Stellan Kendrick’s Goodnight, Gracie is a smart, well-crafted, and tight-knit shocker of a short film 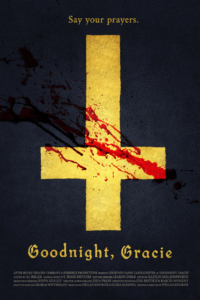 Blink and you might miss it–this common expression applies perfectly to Stellan Kendrick’s shocker of a short film, Goodnight, Gracie.

Clocking in at less than 4 minutes long, the picture wastes no time in delivering the horrific and the suspenseful goods. The performances from the two leads–Courtney Gains and Caige Coulter–contribute meaningfully to the frightening tone, but the direction, script, music, and camerawork are all also top-notch.

And, despite the brief running time, Goodnight, Gracie even manages to surprise in the final seconds, leaving audiences with a lot to ponder regarding the role that faith and spirituality play in their lives.

Eight-year-old Gracie (Coulter) awakes one night to the sound of loud banging coming from somewhere in the house. Her room decorated in religious figurines and other symbols of Catholic faith, the young girl bravely pitter-patters to the staircase to investigate. What she finds at the foot of the stairs is nothing short of horrific: her mother, half-naked and hacked to death, and a snarling man (Gains) hovering above her holding the bloody weapon. When the man locks his maniacal eyes with Gracie’s, the girl wisely bolts to her room, locking the door and hiding beneath the covers with her trusty Bible.

As she hears the thumping footsteps of the freakish killer on the stairs, Gracie turns to her faith, reading aloud from the Bible and praying that God will send his only son to somehow rescue her. And it is at this pivotal moment that Goodnight, Gracie hinges in a delicate and suspenseful balance.

Is Kendrick’s picture a religious message masked as a horror film? Or will bloodshed and murder rule the day, suggesting that we really are alone in the universe and that we must contend with violence and the threat of death ourselves? The film’s closing moments will provide the answer to this age-old and provocative question.

As mentioned, the performances are outstanding.

Gains, who starred as the terrifying Malachai in 1984’s Children of the Corn, is wickedly evil here, with a wide, grinning mouth and a slick, lolling tongue. Coulter is equally special in the short, depicting a panicked and yet strong-willed young girl in a dynamic and captivating way.

The setting of the film–a seemingly pleasant and suburban house–is effectively draped in menacing shadows and darkness, while the soundtrack (by S. Peace Nistades) amps up the tension and leads to the stunning climax.

Theme-wise, Goodnight, Gracie captures the existential dread of works like Albert Camus’ The Stranger, in which characters learn to reject God and religious faith in favor of a life driven more by physical needs, action, and personal choice.

In Kendrick’s movie, Gracie is forced to make a choice based on her upbringing (we can assume) and on her own belief in God…and the consequences of her decision raise the ultimate question of faith. It’s a powerful and thought-provoking statement about the nature of human existence, all ghoulishly packaged as a horror and thriller film.

Stellan Kendrick has crafted a mini-masterpiece with Goodnight, Gracie, and audiences can only hope that he will be afforded the opportunity to make a feature film next. In that medium, his talents are sure to stretch wide and far–and we, as the audience nailed to our seats in fear and anticipation, can only benefit from his efforts.

To find out more about GOODNIGHT, GRACIE, the filmmaker and the upcoming screenings, please check the following links: